After living on our boat in Marina Bay in Gibraltar for almost a year, it was time to start our sailing adventure for real. We were ready, the boat was ready (well, as ready as you can be, the list of pending jobs is still considerable) and summer had started. Our last commitment in Gibraltar was a third vaccination session for me. As we may end up in the Caribbean later this year, we wanted to make sure we were both covered for nasty things like Hep A, Hep B, Typhoid, Yellow Fever and so on. We thought my last appointment for the third jab for Hep B was on Wednesday 6th of June. Unfortunately that was also exactly the day the wind was going to change from the West to the East. Since we would be going in a North-Easterly direction from Gibraltar – up the eastern Spanish coast – we would really like to have a Westerly wind. Then, the weekend before, we realised my vaccination was actually scheduled for Tuesday, the 5th of June around lunchtime. Quickly checking the tide chart (yes, we are trained well! Thanks Chris and Mandy from Hercules Sailing) we saw that that time coincided with high tide in Gibraltar, meaning that during the afternoon we would have the tide going with us as well. It was almost as if it was meant to be! So we decided to get the boat ready on Monday so we could leave Tuesday as soon as I got back from the clinic. 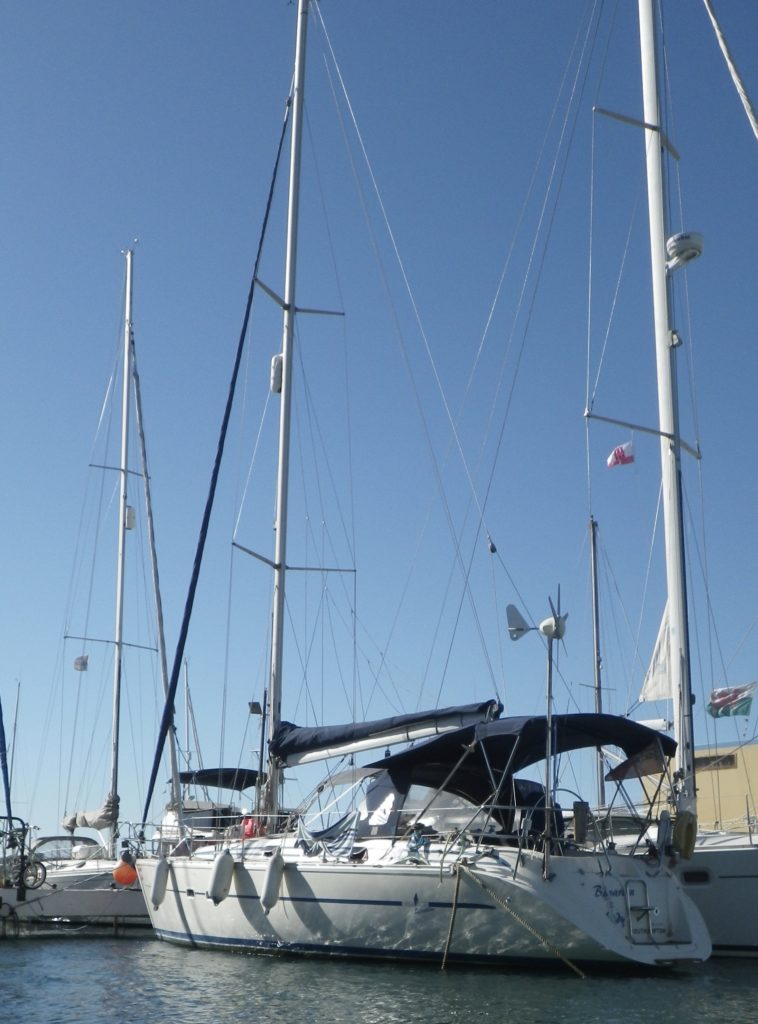 Our home and transportation for the next foreseeable future

Of course on Tuesday morning there were still a million little jobs to do: I went to Morrisons for a panic buy of Corned beef, spam, Thai curry sauce and Patak’s curry paste, Jon went to the chandlery to buy a new Red Ensign (the British flag for on the ship), we had to pick up our boat cards from the printers, the step that we had used to get on and off the boat had to be taken off and I prepared some sandwiches so we wouldn’t have to worry about lunch while on the way.
Right, no more faffing around, we were going! We talked through how we would leave so we were both on the same page. Fortunately there was very little wind so when we were ready, I slipped the bowline that we had prepared, Jon untied the slime line (that held us at the stern) and swiftly got us out of the mooring. We were going!

Just popping in for some diesel

Before we headed into the bay, we wanted to stop at the fuel dock. Diesel is pretty cheap in Gib and although we still had a half full tank, we wanted to top it up to be fully prepared. Now, going to the petrol station in a boat is not as straightforward as filling up your car. In Gibraltar there are 3 petrol stations right next to each other. The first one is Cepsa Gib, and that seems to be the most popular one for sailing yachts. That day it was also popular as there was a massive super yacht filling up, and another sailing yacht our size was tied up to the dock behind it. We decided to go to the second station. We put the fenders on starboard side (the side we were going to dock on), including the big Bertha on the starboard side of the stern so we could spring off when leaving (as taught in our sailing course!). We tied two lines, one at the bow and one at the stern which I would have to use to tie us up on the quay. With Jon at the helm, I jumped from the boat onto the quay with the bow line, and tied it on the bollard, then walked to the stern where Jon handed me the stern line which was also tied onto a bollard. Good. We were tied up! But the station looked remarkably quiet. I walked over to the people filling up the super yacht and asked them if this second station was actually in service. Eh, nope. Ok, how much longer is this super yacht going to be? Maybe we could wait for it? Well, it needs another 4000 liters, so it will probably take some time. But, they said, the sailing yacht behind it is just leaving, so we could take it’s place.
Alright, we slipped the lines, sprang off, and turned around to take the space of the boat that had indeed left. But, just before we were going in, a big motor yacht decided to also approach for the same spot. Obviously it would take a lot more diesel than we would so we the guy working for the petrol station just waved us along in order to make space for the other boat. Sigh. Let’s try the third petrol station. 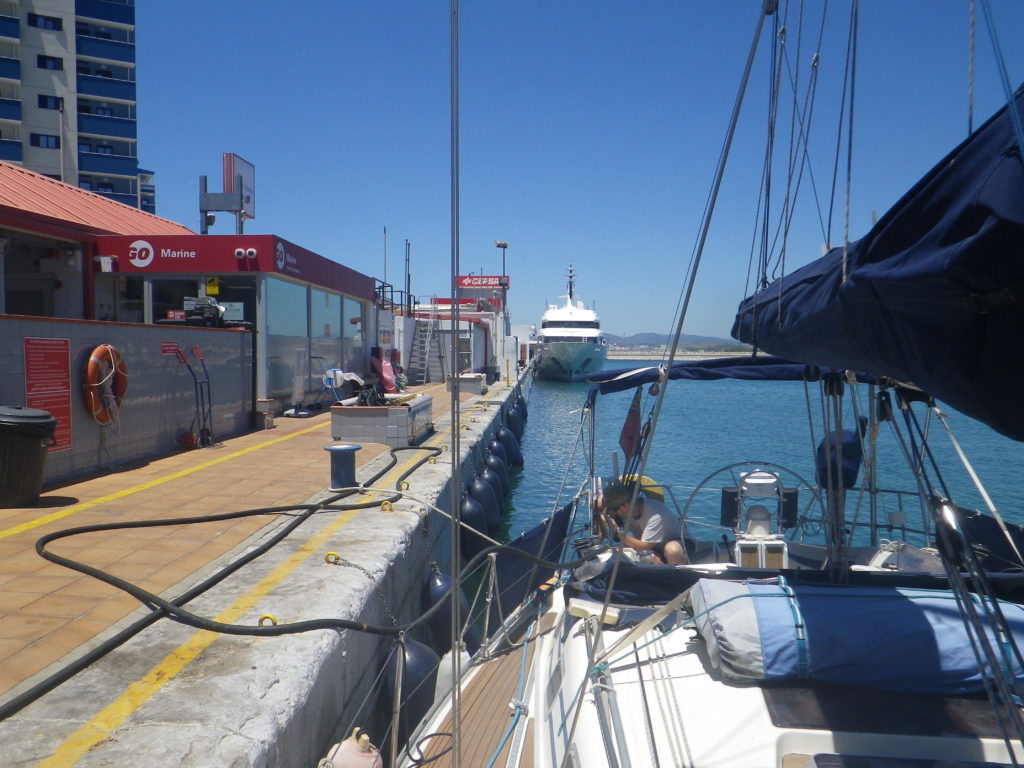 Finally filling up at the fuel dock

We repeated the docking procedure – again without any problems – and this time we were finally welcomed by an attendant. Hurray, somebody wants our business! We just had to move the boat up a bit so we could go to the pump a few metres up. As our boat is not very heavy, we could just untie the lines and pull the boat along (he kindly offered to do the pulling from the bow, I just had to keep the stern in line while Jon stayed on the boat). With the boat finally filled up, we left the fuelling dock about 45 minutes after we first arrived. Not exactly a quick refill

Our second order of business was a little bit less functional. Apparently renaming your boat is bad luck and in order to counteract this, you have to perform a ritual to, ehm, appease Poseidon. We had changed the name of our boat from Bavarian Lady to Goodvibes. Of course, we are not superstitious at all, but you know, just in case… And especially after our engine overheating a few days before we thought we’d perform the ritual just before going.
There are various versions of the renaming ceremony. The version that Jon had heard of assumes that an eel with the same name as your vessel always follows your boat. In order to get rid of the eel with the old name, you have to make three 360 degrees turns. You will then take a gun, and shoot in the water to scare the eel away, making space for the eel with the new name. Although Jon is South African, he does not carry a gun (living in Europe does that to you), and luckily it is allowed to uncork a bottle of champagne instead. We had a nice bottle of champers saved especially for this moment, so we followed the ceremony and hopefully successfully scared the eel away. You then have to bribe Poseidon with a bit of the champagne to make sure he’s happy with the whole affair. We both took a sip each and gave some to Poseidon telling him the new name of our boat and stating our good intentions just in case we didn’t follow the ceremony to the letter.

The rest of the bottle went back in the fridge for when we had arrived in Estepona. Unfortunately our bouncy begin of the trip caused the bottle to lose it’s bottle stop and fall over so we ended up with fancy champagne in the bottom of our fridge.

The not so straight strait 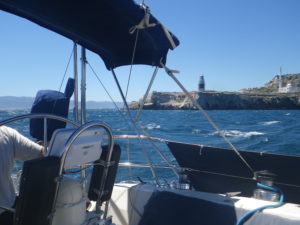 We had a clear path through the big ships to Europe point, the most southern point of Gibraltar. The wind was a bit more than the forecasted 15 knots but seemed manageable. So very bravely we put the sails up and turned the engine off. We made good speed but the wind was picking up more and more, with gusts to 25 knots, and the waves were also getting higher. It looked like we could round the point without having to tack, but a big cargo ship was in the way and we had to go round it, making us going directly into the waves and almost directly into the wind. As we expected calm seas and not much wind (and we are still pretty inexperienced) we hadn’t locked everything away: we left some stuff on the tabel and chart table which didn’t stay there for very long because of the listing of the boat. Poor puppy, who was sitting on her pile of cushions in the aft corner of the starboard sofa, ended up with Jon’s leather hat on top of her. The washing-up liquid went flying and even the bottles in the spice rack bashed so hard together that I full expected to find the balsamic vinegar on the floor. Luckily there was no real damage. We decided this was a little bit too much action for us, so we dropped the main, rolled in the jib and turned on the engine. It was still pretty bouncy for a while, but as soon as we headed into North/East direction the waves and wind were behind us and it was a lot more comfortable.

The next 4 hours were basically the same: jib sail out and engine on. We decided not to take the mainsail out as we hadn’t really made friends with the reefing mechanism yet and we were quite happy to go 7 knots just with the headsail out. After an hour or two, while we were a few miles out at sea, the depth meter suddenly indicated 3m depth. Pretty impossible, but still, you wonder for a second: could there be a massive sandbank that is not on any chart and nobody has told us about? Fortunately after 30 minutes or so the depth went back to a normal 70 odd meters.

Wine instead of champagne

Around 19.30 we approached Estepona marina. Jon called the marina on the VHF and other than: “The office closed at 19” we did not get a clear indication of what to do. We continued into the marina and looked around for somebody waving perhaps, to tell us where to go. But no such luck. Jon called again and this time communication was clearer and we were told to tie up at the visitor’s dock. This was a similar procedure as tying up to the fuel dock so thanks to our earlier practice we had no issues at all doing so. Even though we’d only been at sea for a few hours, it was great to be standing on solid ground again. More so, because we could finally take a deep breath and give ourselves a pat on the shoulder for completing our maiden voyage. 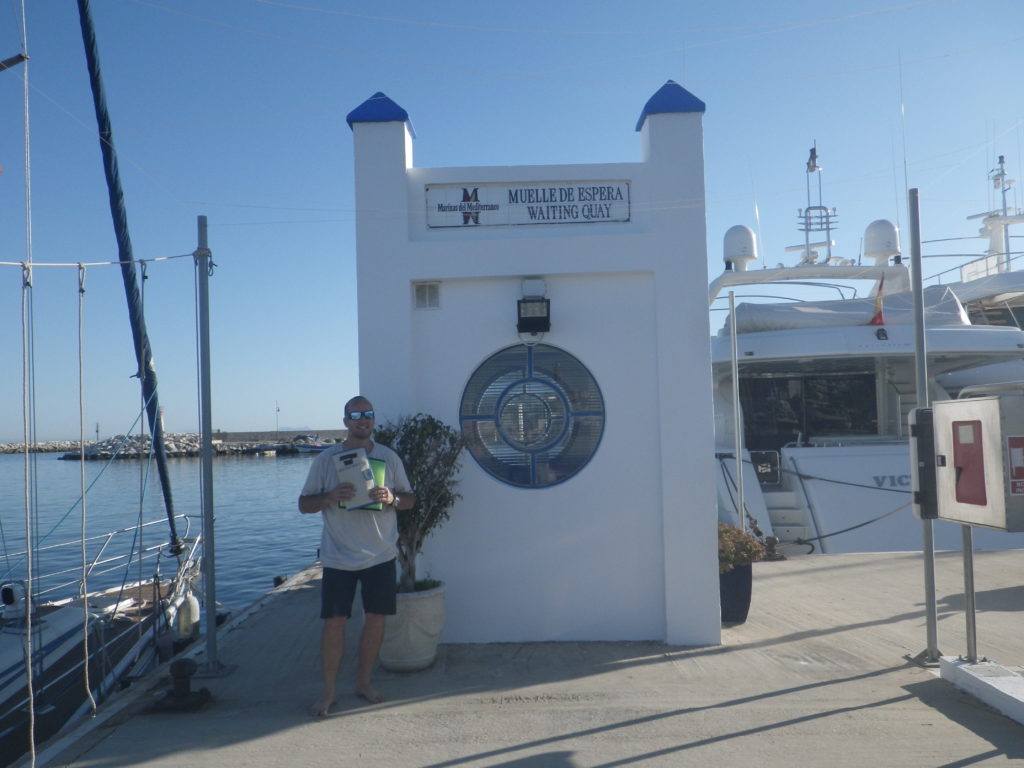 We filled in the check-in forms in a bloody hot office, but with a very friendly and chatty marina employee; it was good to speak a bit of Spanish again after a year in English speaking Gibraltar. As is the custom with some marina’s on the Costa del Sol, we even received a free bottle of wine on our check-in! All that was left was moving the boat into what would be our berth for the next few days. We nailed the mooring (stern to, this time, so reversing in) with some help from the marinero with the lines and we could finally rest our asses down. As we discovered at this point the accident with the champagne bottle in the fridge, we were very happy to have just received the free bottle of red.

7 Comments on “Our maiden voyage: Gibraltar to Estepona”