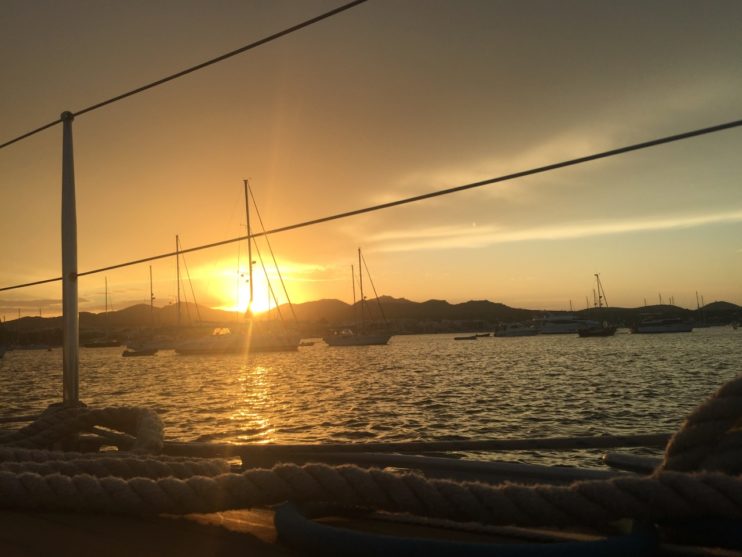 The crossing from Formentera to Mallorca started off nicely: we had left our anchorage before lunchtime and as there wasn’t much wind we were just motorsailing. As most people leave from Ibiza, further north, to go across to Mallorca, there wasn’t a lot of traffic to keep an eye on either. At the beginning of the evening a bird joined us for a while. It wasn’t clear if it was attracted to or annoyed with our boat but it tried to land on our spreaders and kept flying around the mast. Eventually it decided it wasn’t getting any joy and flew off again. 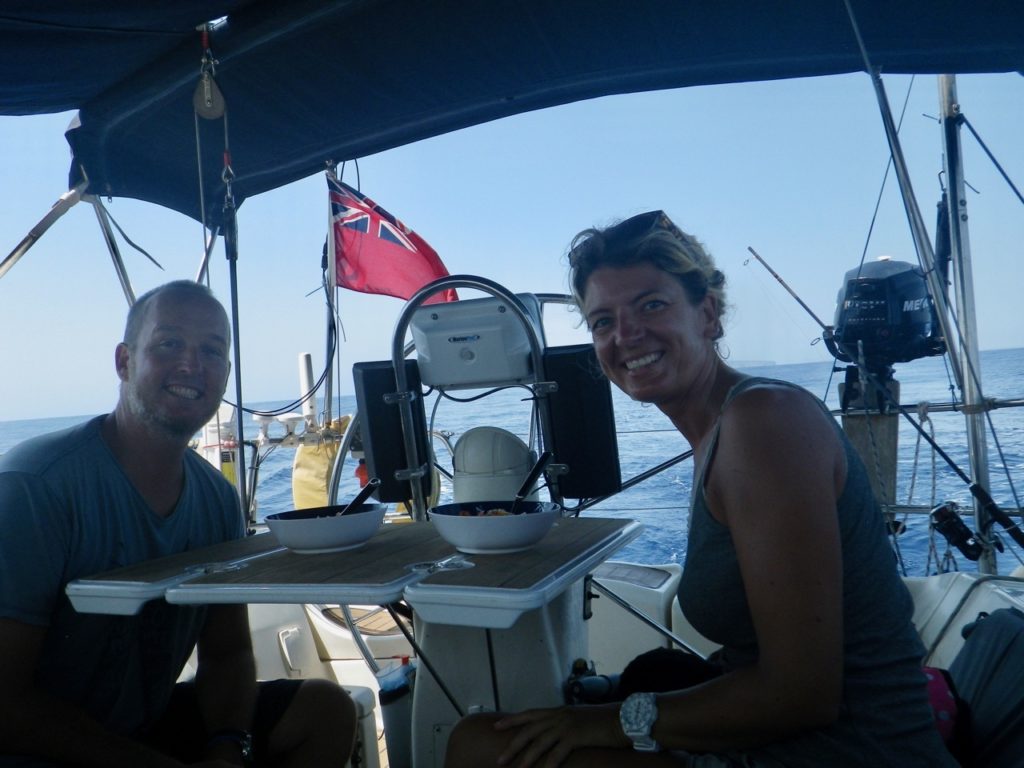 Lunch somewhere between Formentera and Mallorca

The second half of the night, when we were getting closer to Mallorca, the waves became choppier and the wind increased to 10 – 15 knots which made it made it quite uncomfortable to sleep. We had planned to anchor in Porto Colom, but we got there when it was still dark and our pilotbook said there wasn’t much space to anchor (which turn out to be completely untrue). Anyway, we decided to head on for another 10 miles to Porto Cristo. This happened to be the marina where we had bought Goodvibes (then called Bavarian Lady) in 2016 and we remembered it had a nice marina. Unfortunately what we hadn’t remembered was that there wasn’t much space to anchor.

So we left Porto Cristo and slowly ambled south to find a cala where we could drop our anchor and get some much needed rest.

A cala is a small bay usually surrounded by steep cliffs. There are plenty of them in the Balearic islands and are very popular for anchoring because they can give you shelter from the wind and the swell – depending on the direction of the two of course. We found some space in Cala Magraner but there were some boats in the most sheltered part, closest to the beach, so we had to anchor a bit further out where we did get quite a bit of swell. It looked absolutely beautiful though and we were happy to relax for a bit. In the evening some of our neighbours left so we moved closer into the cala to be more protected. At night the wind and swell kept increasing. Initially we kind of ignored this because we just wanted to sleep. But slowly but surely the sound of waves crashing into the rocks a few meters away from your head and the rolling of the boat made it more and more difficult to rest. 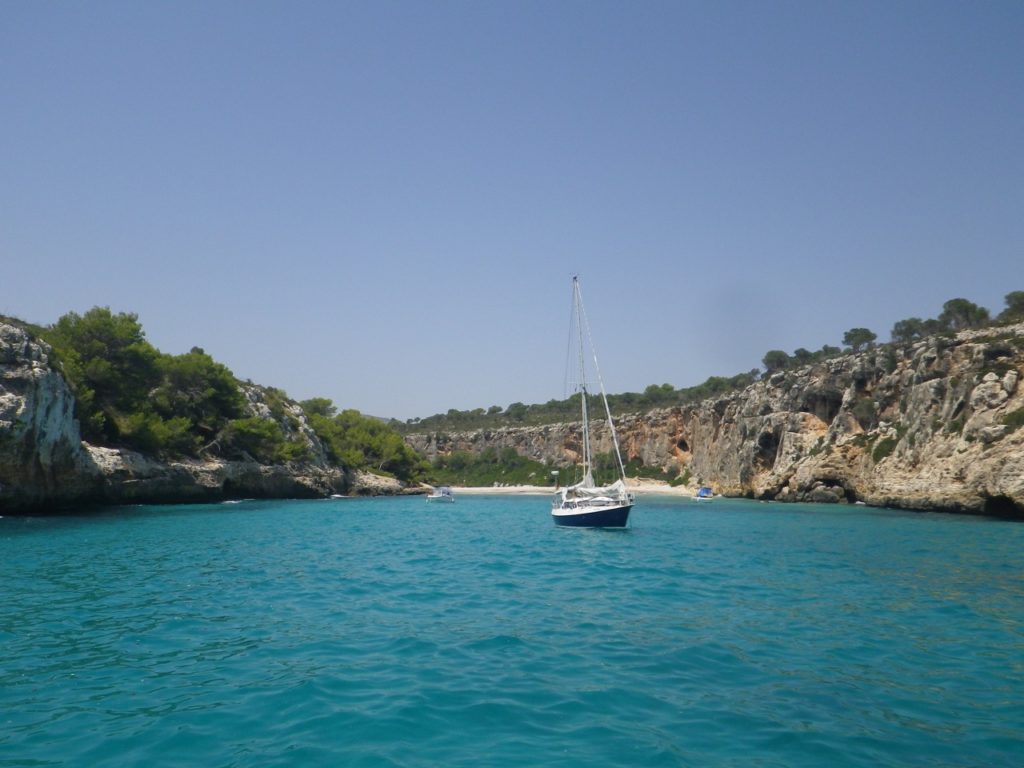 In the evening we moved to the location of this sailboat. You can see how the cliffs are very close on both sides

We were up early the next morning to shoot back to Porto Cristo where we had booked a berth in the marina for the following night. The swell hadn’t eased off in the cala and with hindsight I think we were very brave that we stayed in Cala Magraner until daylight. One positive is that it has certainly given us trust in our anchor.

Off we went to what was supposed a trip of less than an hour to Porto Cristo. When we were close to the marina entrance we heard a whistle and a foghorn from one of the boats close to us. We had been eyeing them for a while because they were in our path but not making much headway. We turned towards them and they told us their engine had stopped working and they needed a tow into Porto Cristo. Of course we wanted to help, but we had to take a few minutes to think what to do exactly as we had not done this before! We tied two of our heavy duty mooring lines together so we had a line of sufficient length and tied it to our stern. Now we just had to get the other end to them. Easier said than done in a choppy sea and with 2 Portuguese (I think) sailors on the other boat who didn’t speak a lot of English. I (Margriet) took the helm and came up behind their boat in order to pass them within only a meter or two so Jon could throw the line to one of the men on the other boat. It wasn’t so easy as it was still pretty bouncy and the other boat was virtually steerless. We managed though, and after they tied the other end onto their bow we could slowly tow them into the marina. 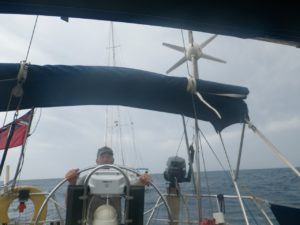 While we entered the marina there was the next step to consider: where would we go and, more importantly, where would they go? We decided to call the marina and ask. They were initially not very forthcoming so we continued slowly into the marina, while we warned outcoming vessels on VHF channel 16 to keep a safe distance from us as we were towing. Just when we had made a sort of a plan to untie the other boat so they could anchor in the marina entrance, a dinghy appeared with some marina personnel. They got another line connected so ours could be untied and off we went, leaving the Portuguese in the safe hands of the locals.

We had to motor up and down a few times in the marina before it was clear where they wanted us to berth. We finally saw a marinero and after some skilful reversing by Captain Jon we were finally tied up. Only to be told by the marinero that we were at the wrong marina. Boohoo… Apparently the online reservation that we made was for a government regulated marina which had a few berths across the commercial marina where we were then. So we untied again and manoeuvred out of the tight spot. During our exit, our bow came very close to the stern of a Danish boat, whose owner happened to be in his cockpit sunbathing stark-naked. When he saw us coming close, he kindly got up to fend us off, but not after he had announced that he’d better put on some underpants. I was very grateful to him – on both accounts. 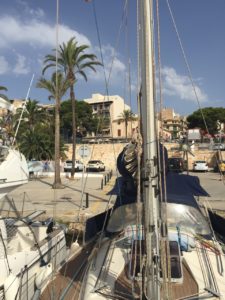 After a year, back in Porto Cristo

When we arrived at our berth in the other marina, an Englishman kindly helped us with the stern lines. He had followed our towing adventure over the VHF and correctly assumed we had had quite a morning and could do with some help finally tying up. Not only had it been an eventful morning, we also hadn’t had much sleep because of the swell nor did we have a lot of rest the night before on our passage, so we decided to add another night to our stay in Porto Cristo to take some time to recover.

After filling up on the fueldock, we left Porto Cristo on August 3rd to head up north. We had booked another marina (Cala Ratjada) in the north of Mallorca for the 4th, as we had the vague plan of either heading to Menorco or continuing along the north coast of Mallorca. 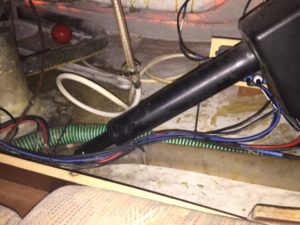 Broken autopilot: the black arm is supposed to be up in the air, connected to the rudder mechanism 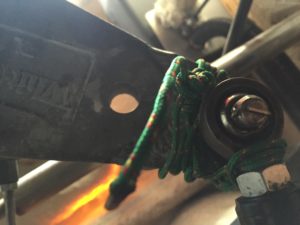 When we hoisted the main, just outside Porto Cristo, the boat suddenly changed direction. Which was strange because it was on the autopilot with a course to stay into the wind, while Jon was at the mast pulling the sail up and I was pulling in the slack on the main halyard. An error message on the chart plotter screen informed us that there was a problem with the autopilot. Now, in the Porto Cristo marina we had been stern to the quay and we had found out that there was a ledge about a meter under the waterline that stuck out which our rudder had smashed into a few times. Once we realised this, we lengthened our sternlines to be further away but it could well be that one of those bumps had damaged the autopilot mechanism. As we didn’t have to go far, it was not a major issue to hand steer the rest of the journey. But we were crossing our fingers nothing major had been broken as both the autopilot can be expensive to repair. We wouldn’t know until we were anchored and could investigate the issue further. 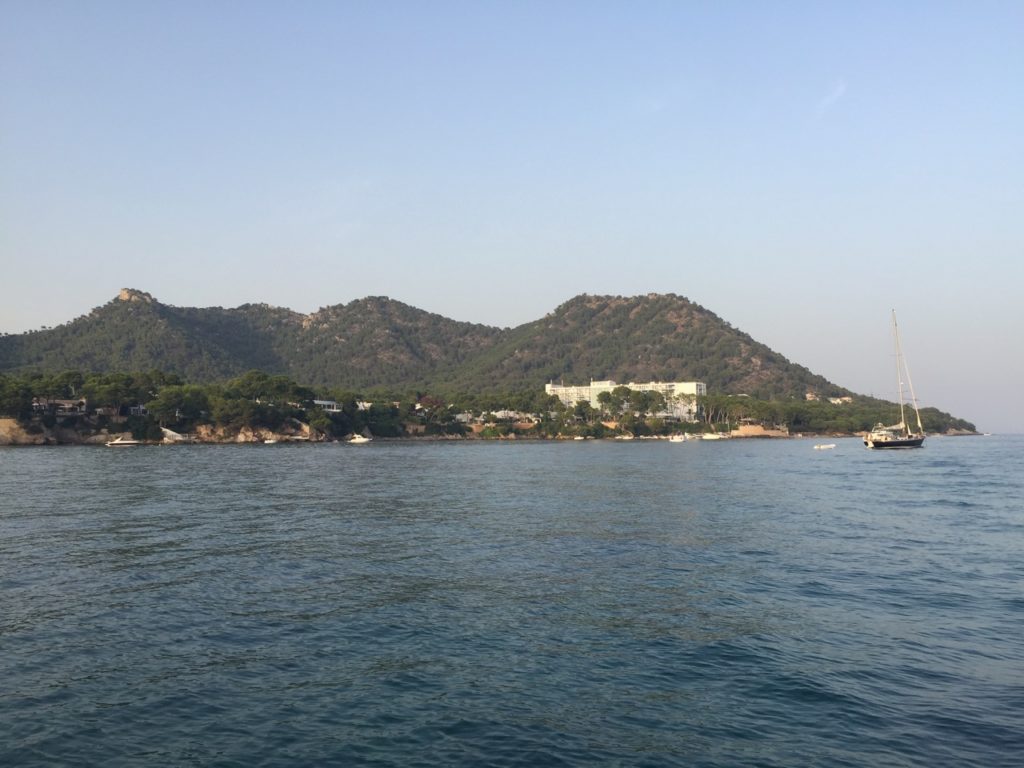 There was a nice large bay just between Porto Colom and Cala Ratjada close to Port Nou. It had a large shallow area and not a lot of other boats. We anchored and immediately Jon disappeared into the port aft cabin to investigate the autopilot. Luckily it was only the connection of the autopilot arm and it was easy to fix temporarily until we can order and refit the broken part.

After a lovely night sleep with very little swell we moved on to the small marina of Cala Ratjada, on the northeast point of Mallorca. This was a lovely place, full of charm and also full of Germans. We decided to treat ourselves and go out for dinner and by default the waitress addressed the guests in German. We were basically surrounded by big, burly, blond people. Even though the town was geared to tourists it was done with style and it had a really friendly vibe.

The wind was in the wrong direction to continue north so we decided to head down back to Porto Colom as we had heard good stories about it and wanted to find out for ourselves. 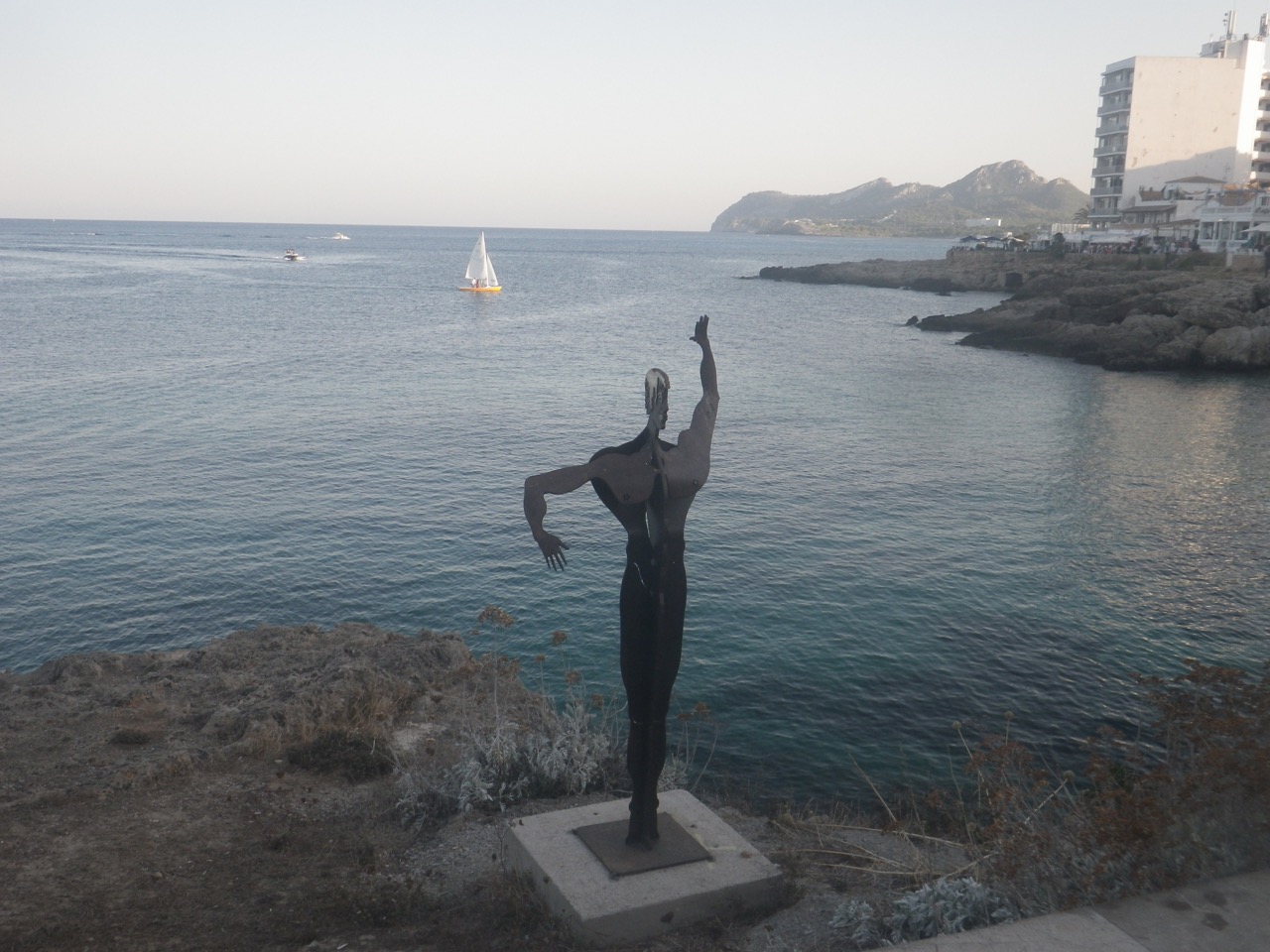 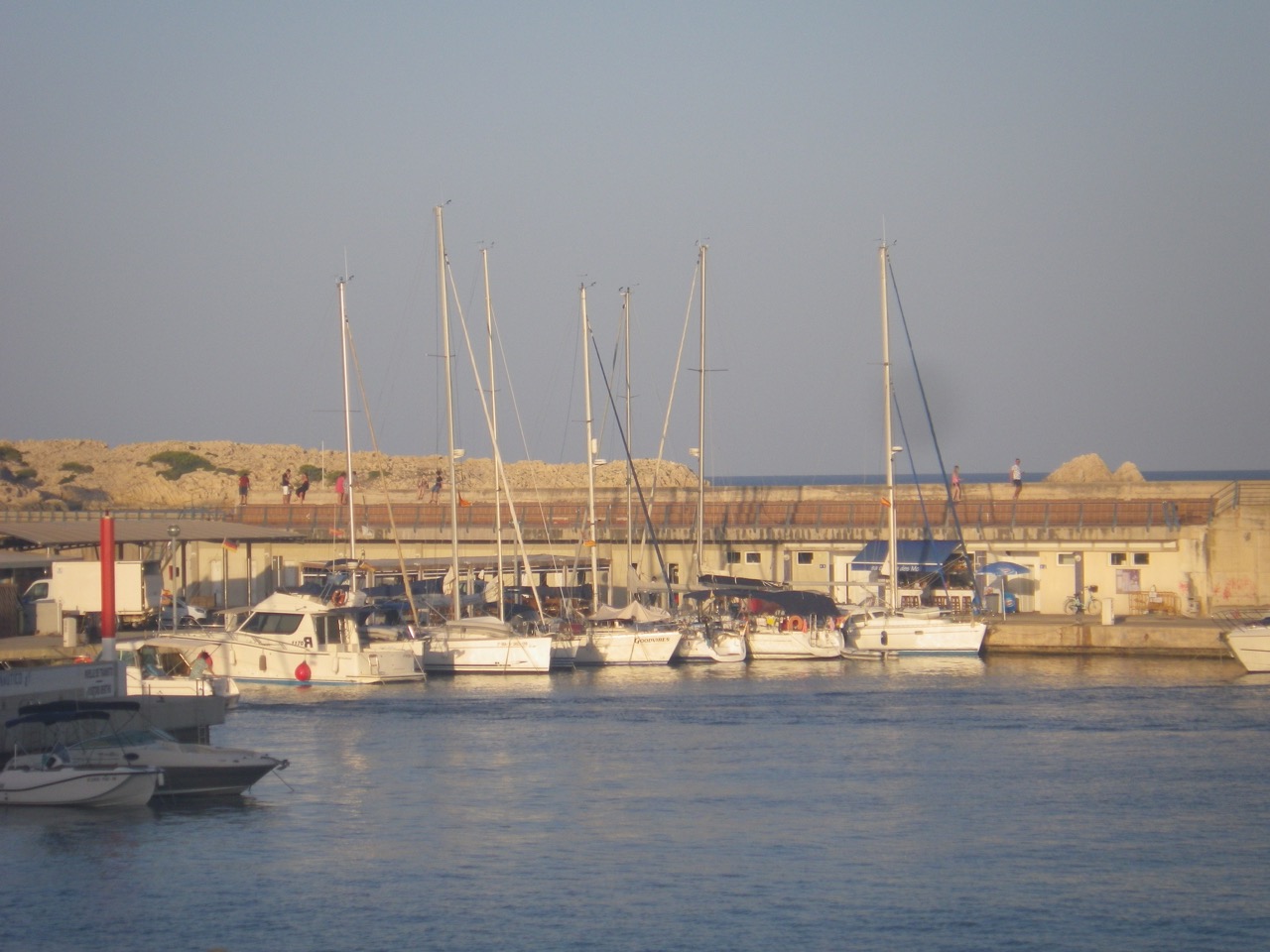 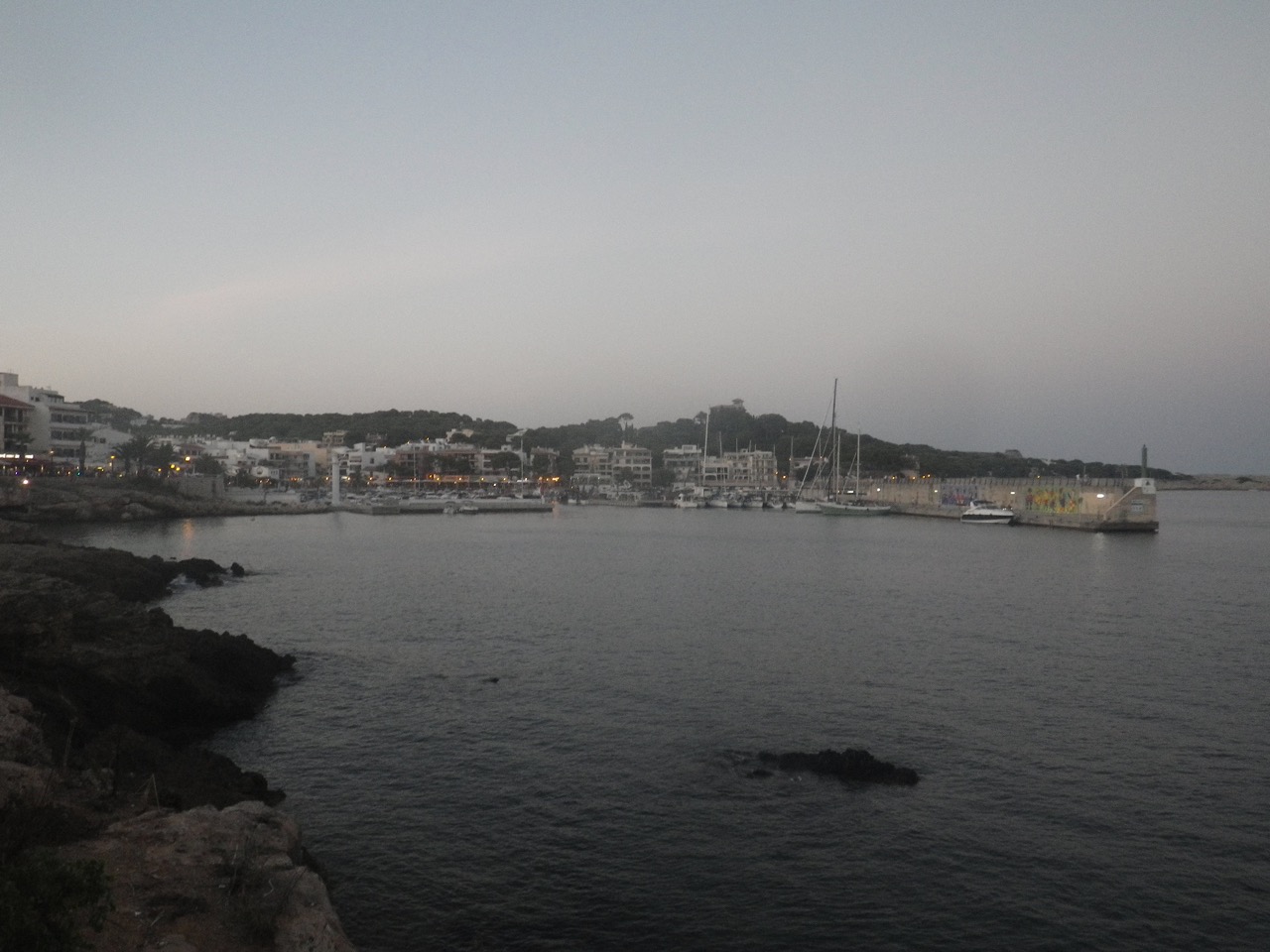 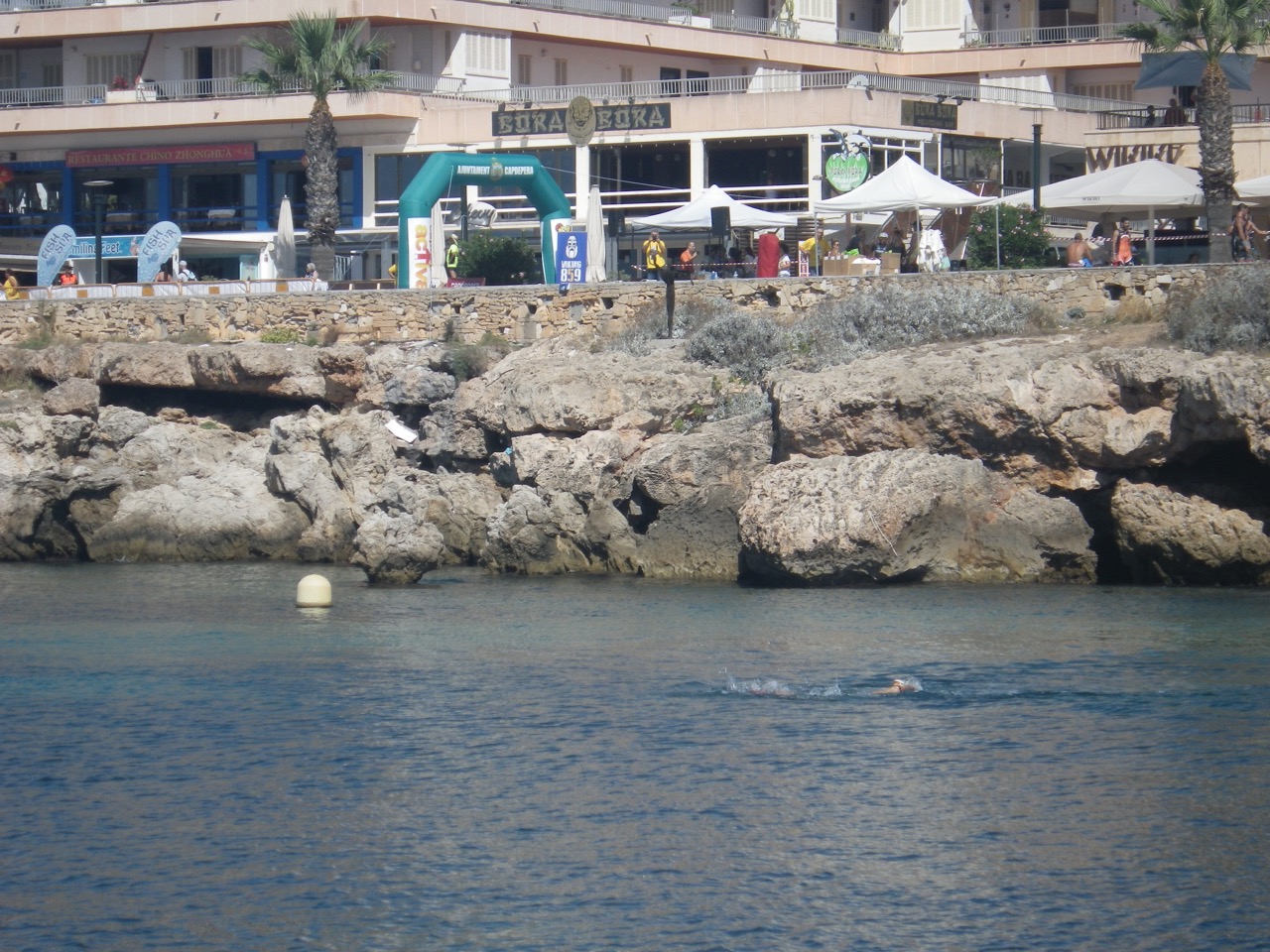 Swimming in the marina
A triathlon was in progress when we left. We didn't envy the participants running in 30+ degree heat and high humidity.

As we were having the wind behind us we could put the sails up immediately after we left the marina in Cala Ratjada, and we didn’t take them down until we arrived in Porto Colom 6 hours later. On top of the nice sail, Jon also managed to catch our first few fish! 2 mackerels were reeled in, gutted behind the steering wheel and put in the fridge to be fried for supper later.

The anchorage in Porto Colom turned out to have plenty of space. The ground is seagrass with sandy patches which are easily spotted. As it is sheltered from all winds and swell, except southeast, it is a very pleasant place to stay for a few days. In addition, it is very easy to get to land: you can cross a large bay with mooring balls to get to a shore with several quays for fishing boats where you can moor you dinghy without any problems. The shore is lined with a green area with pine trees – perfect to walk the dog and to find some respite from the burning sun. You can also dinghy to the marina where there is a floating pontoon for tenders. Once moored here, you can access the supermarket and restaurants in the town. 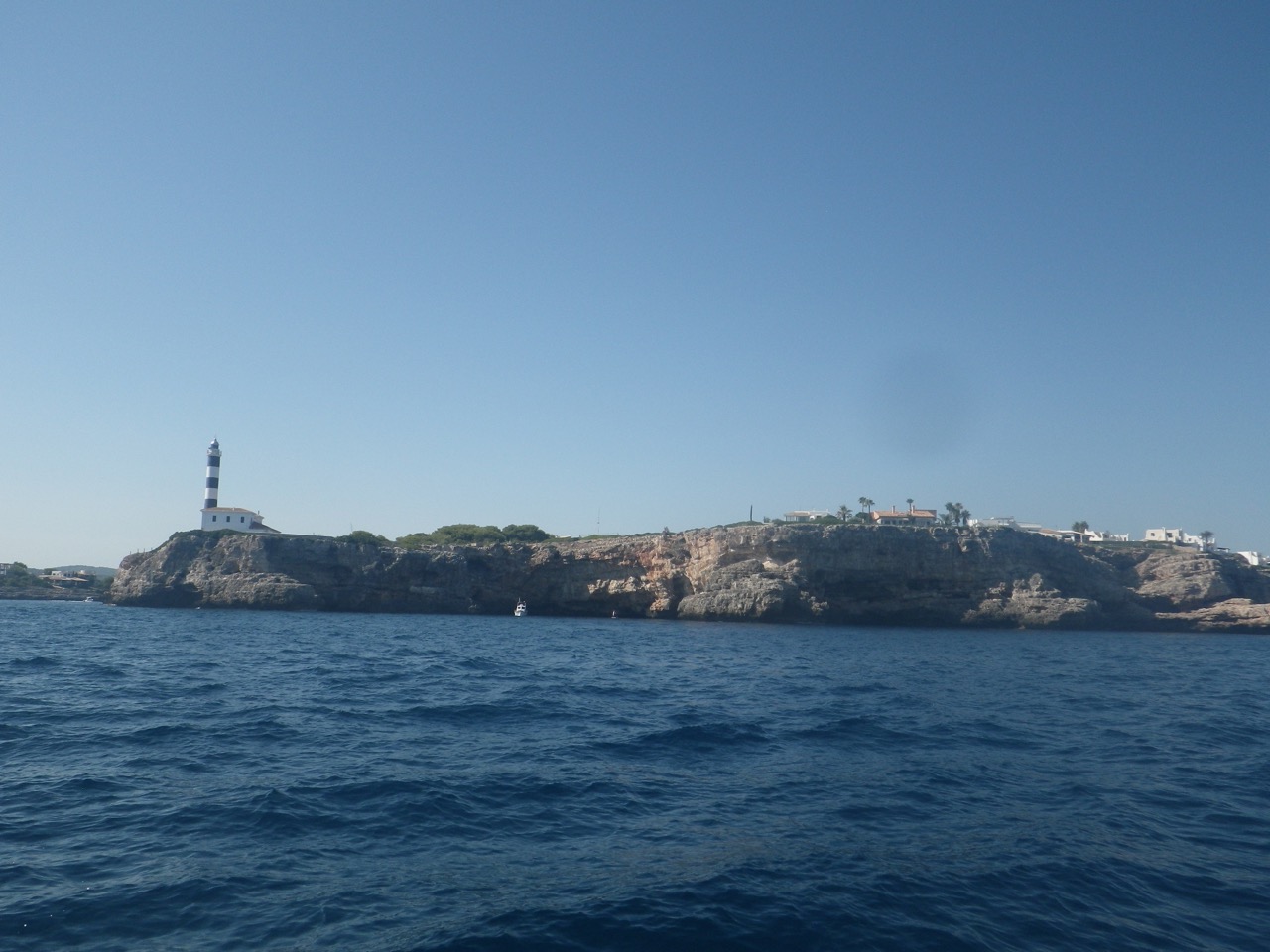 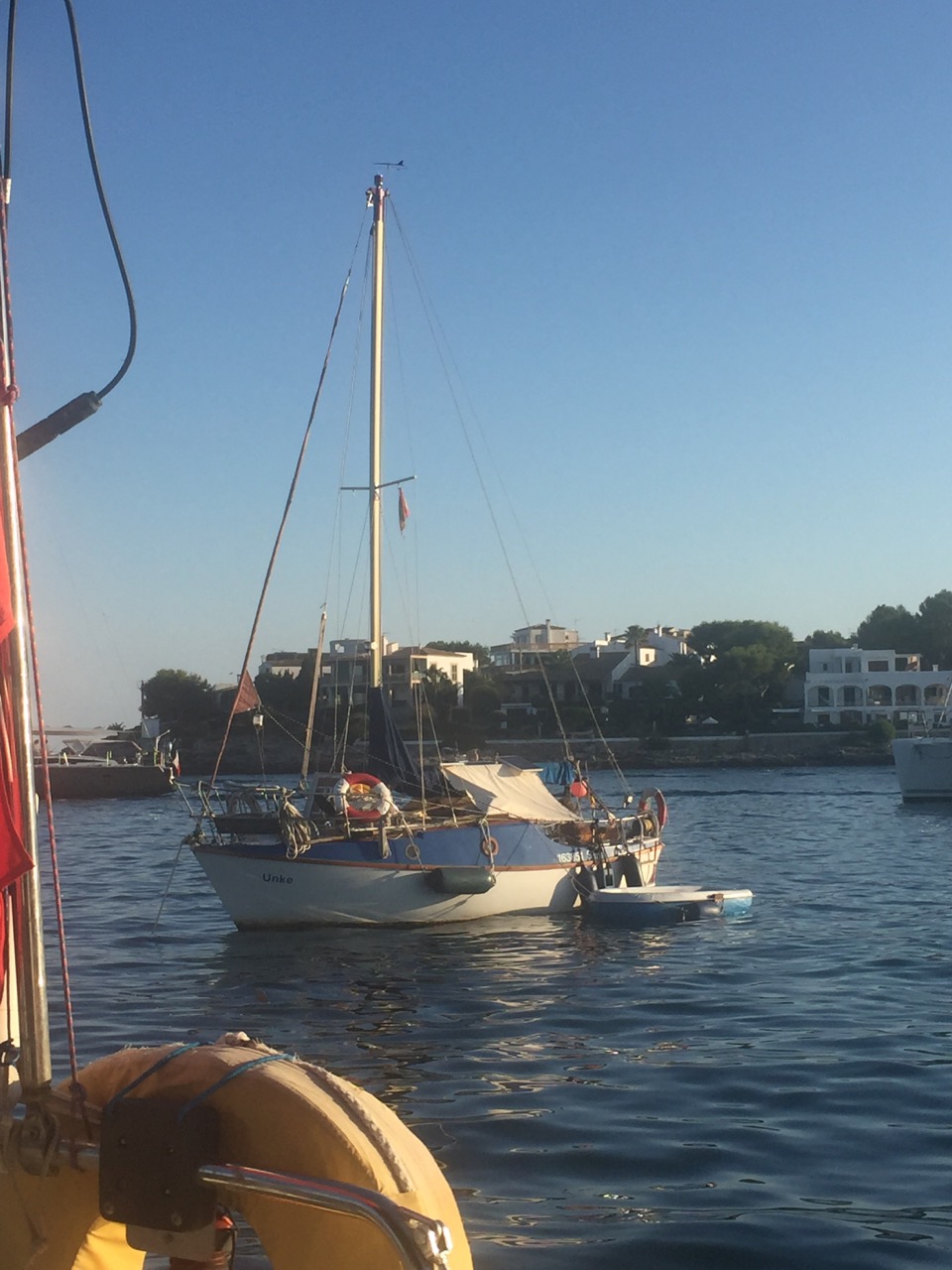 Unke
The boat of our neighbour, a interesting character. One day he came to our boat to drop off some bread he had bought ashore. 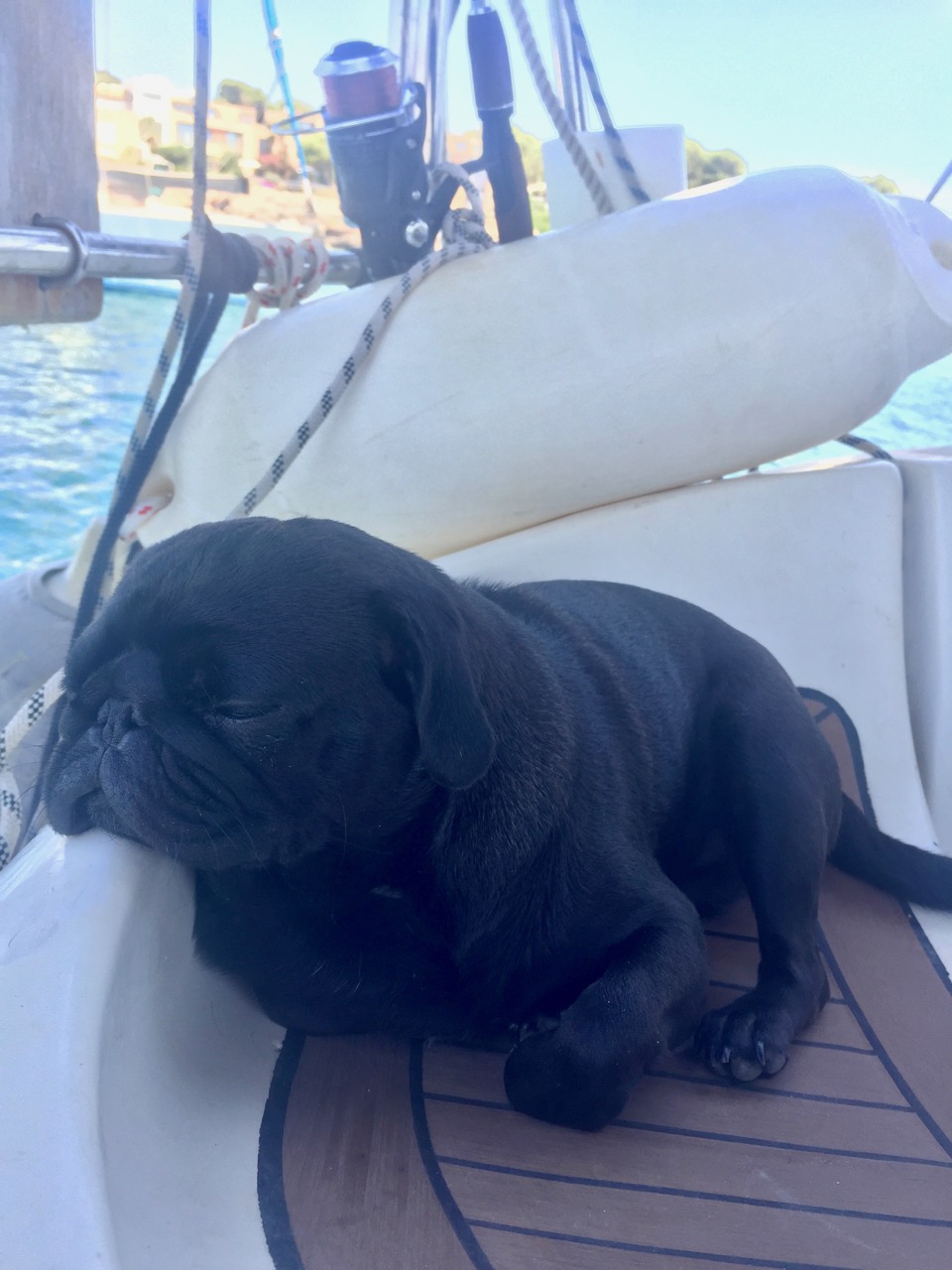 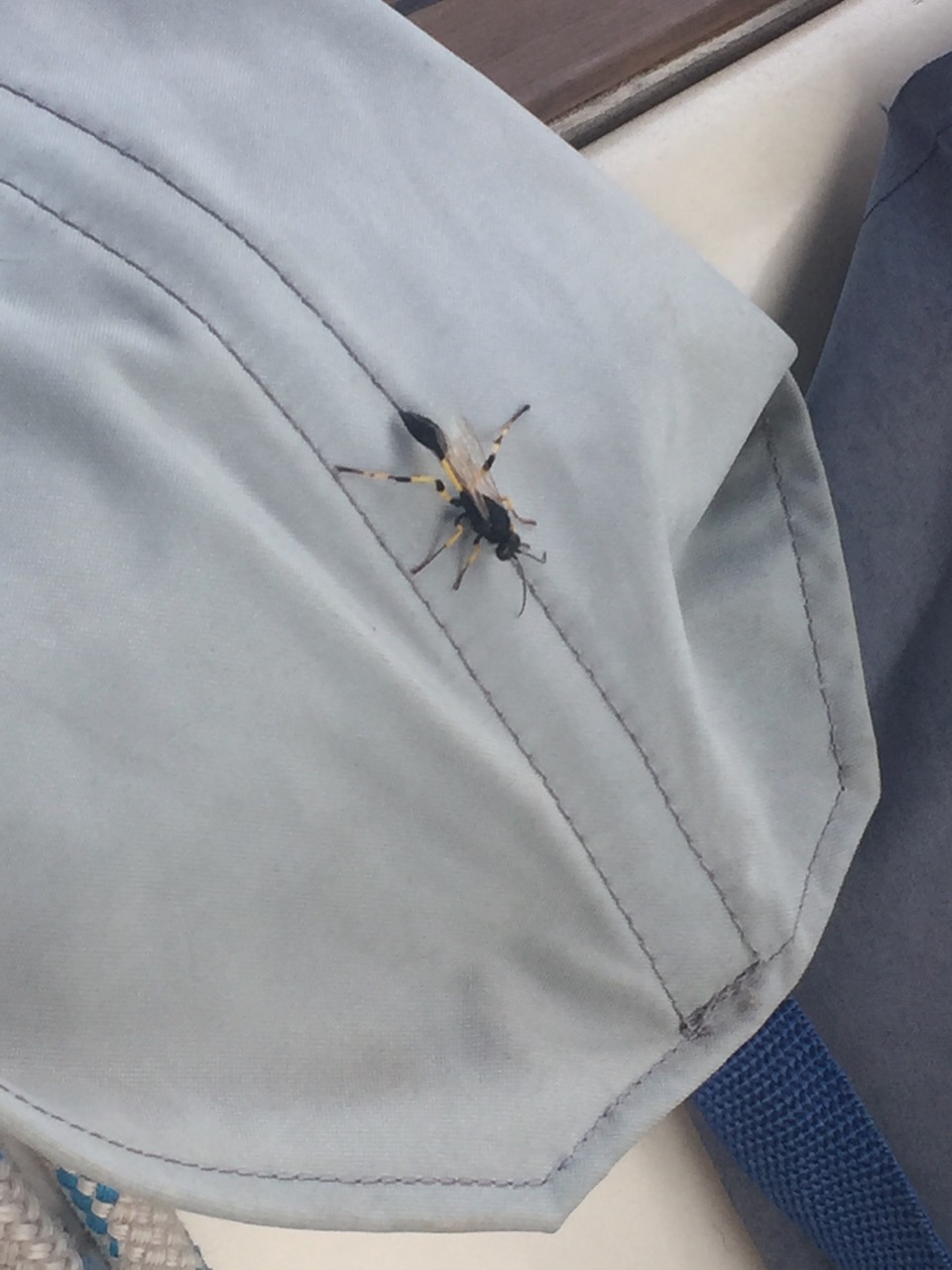 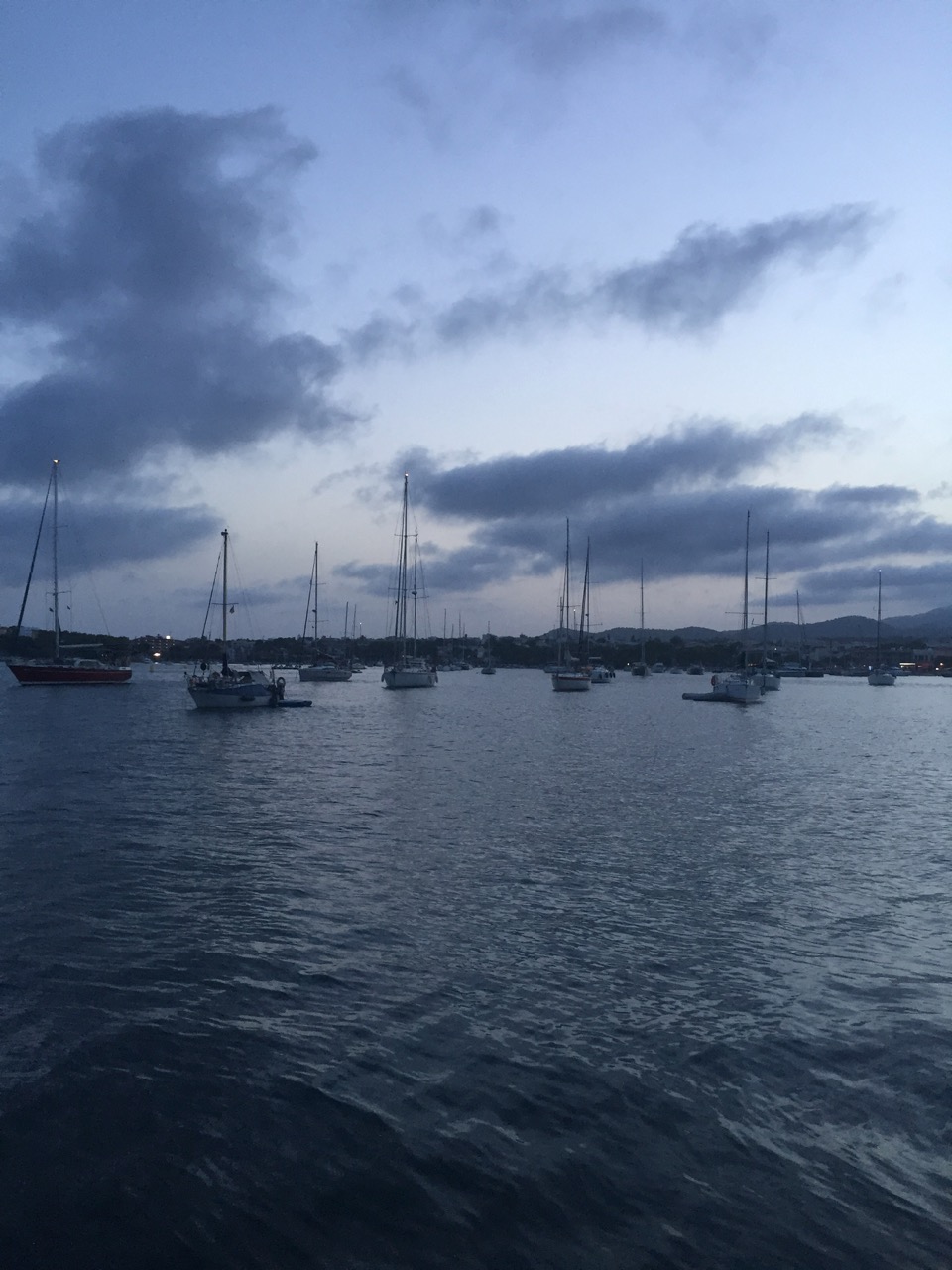 Dusk setting over the bay 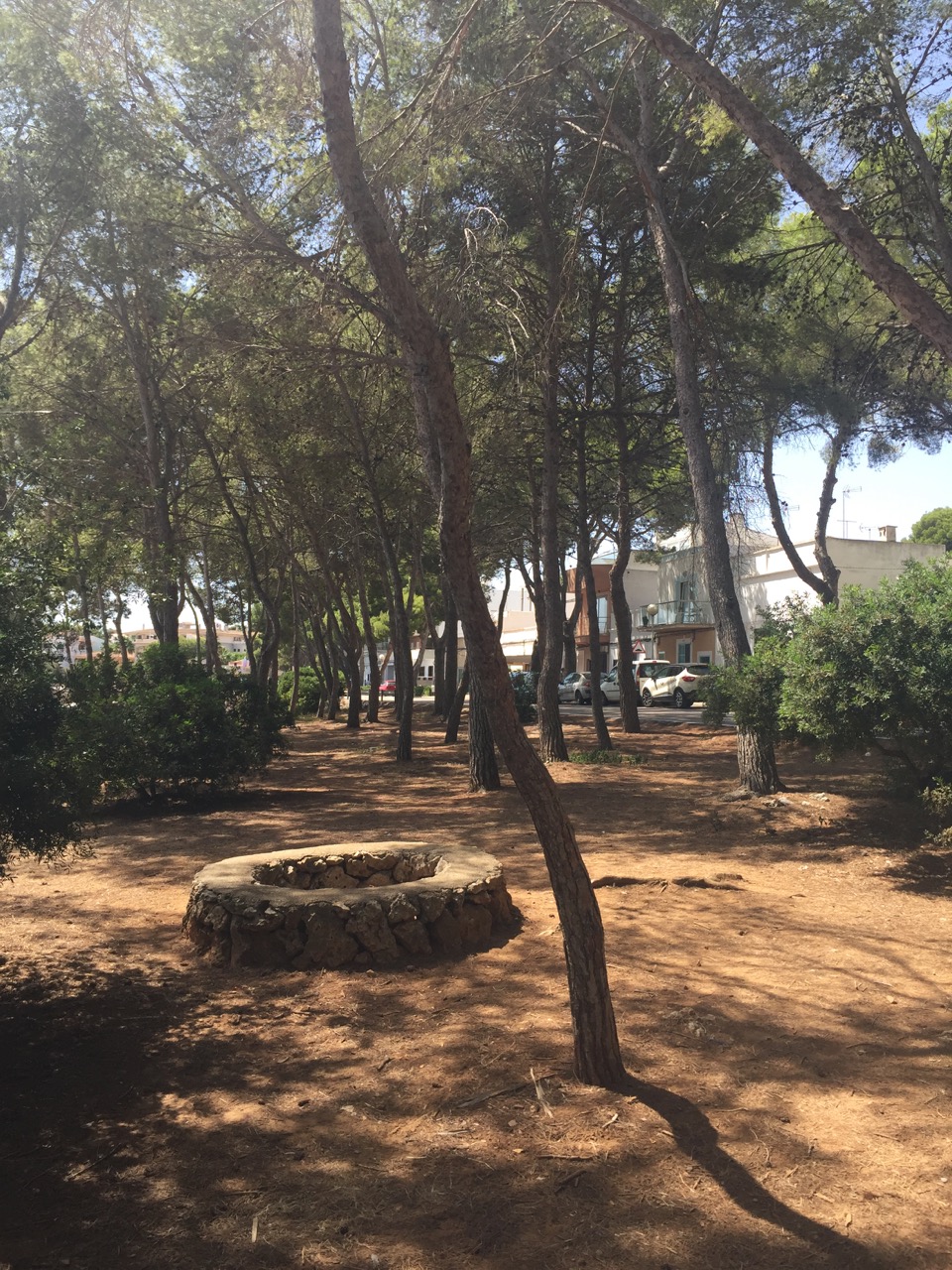 Porto Colom shore
Strip of greenery, shaded by pine trees, between the shore and the road 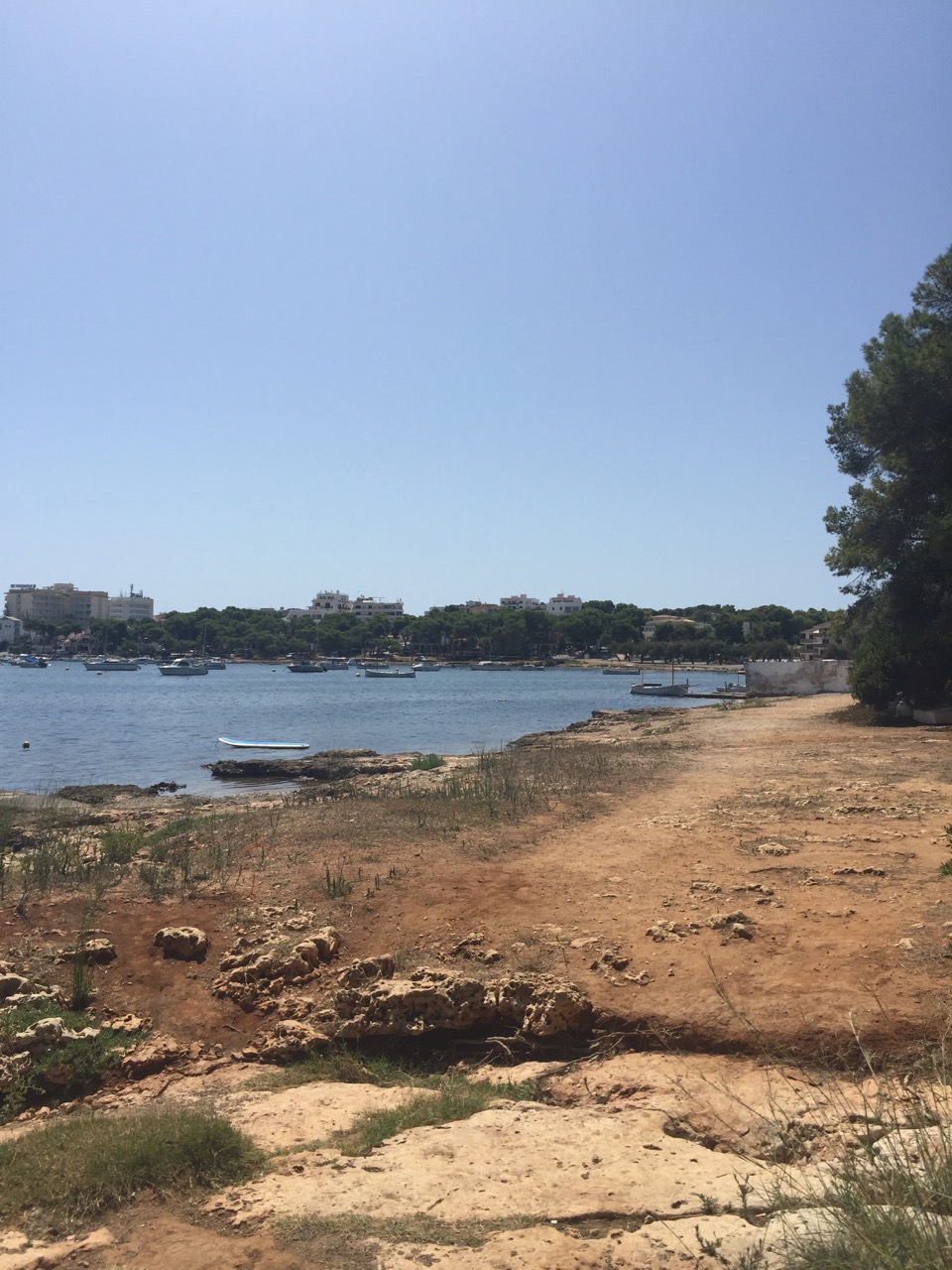 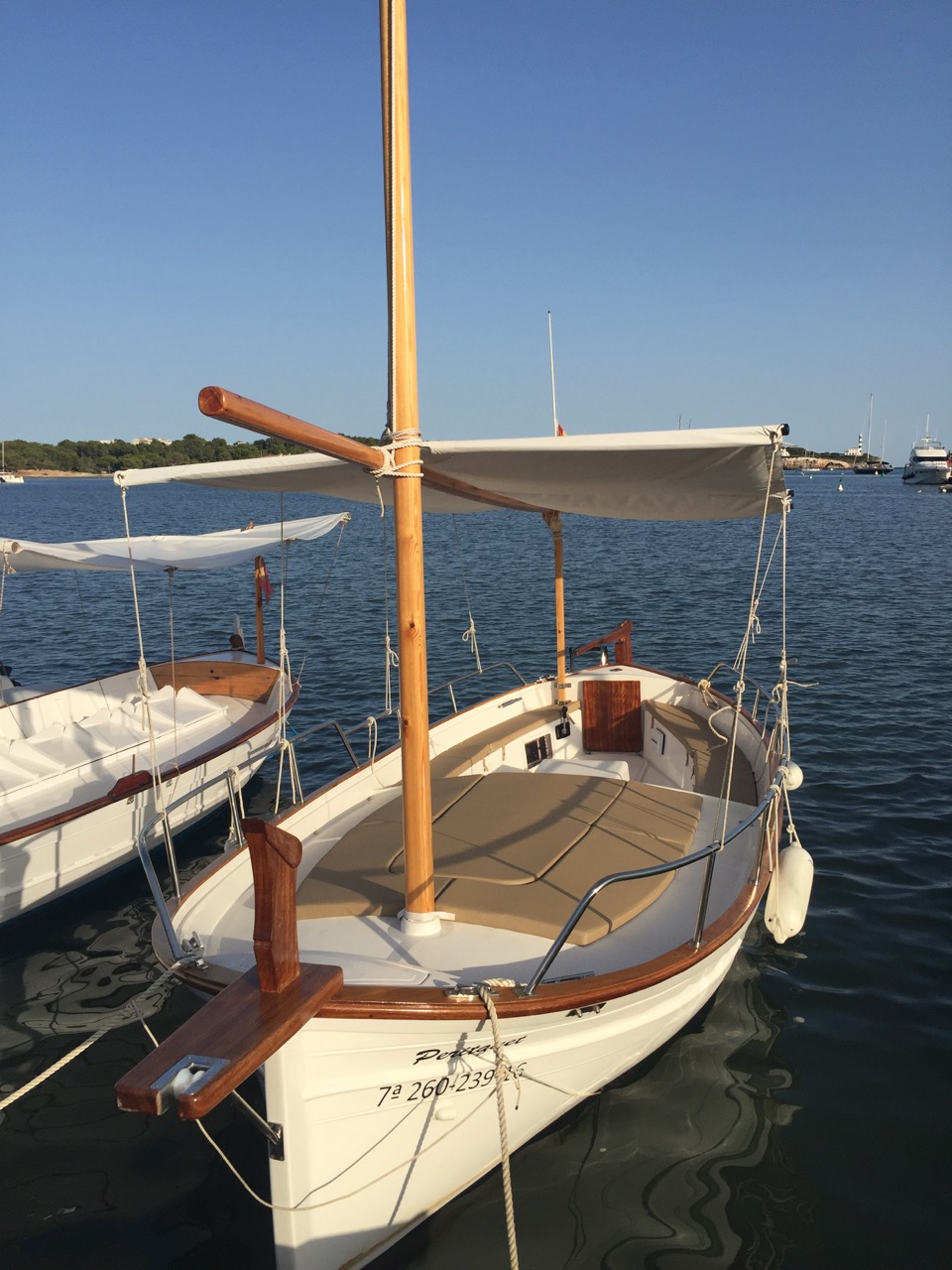 Local design
You saw many of these lovely looking boats. They are used by local fisherman and are also for rent. 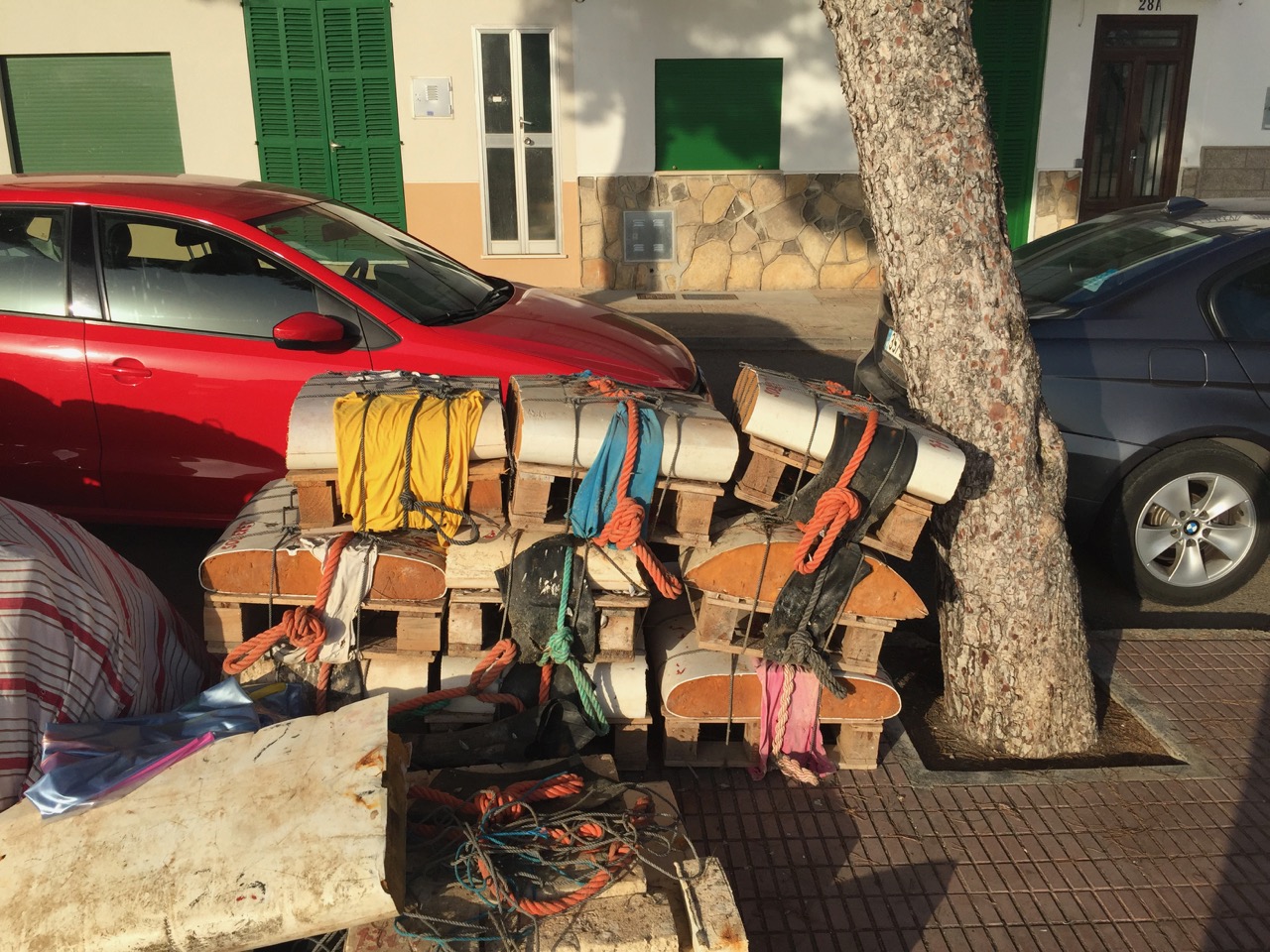 Recycled
Floats made from used surfboards 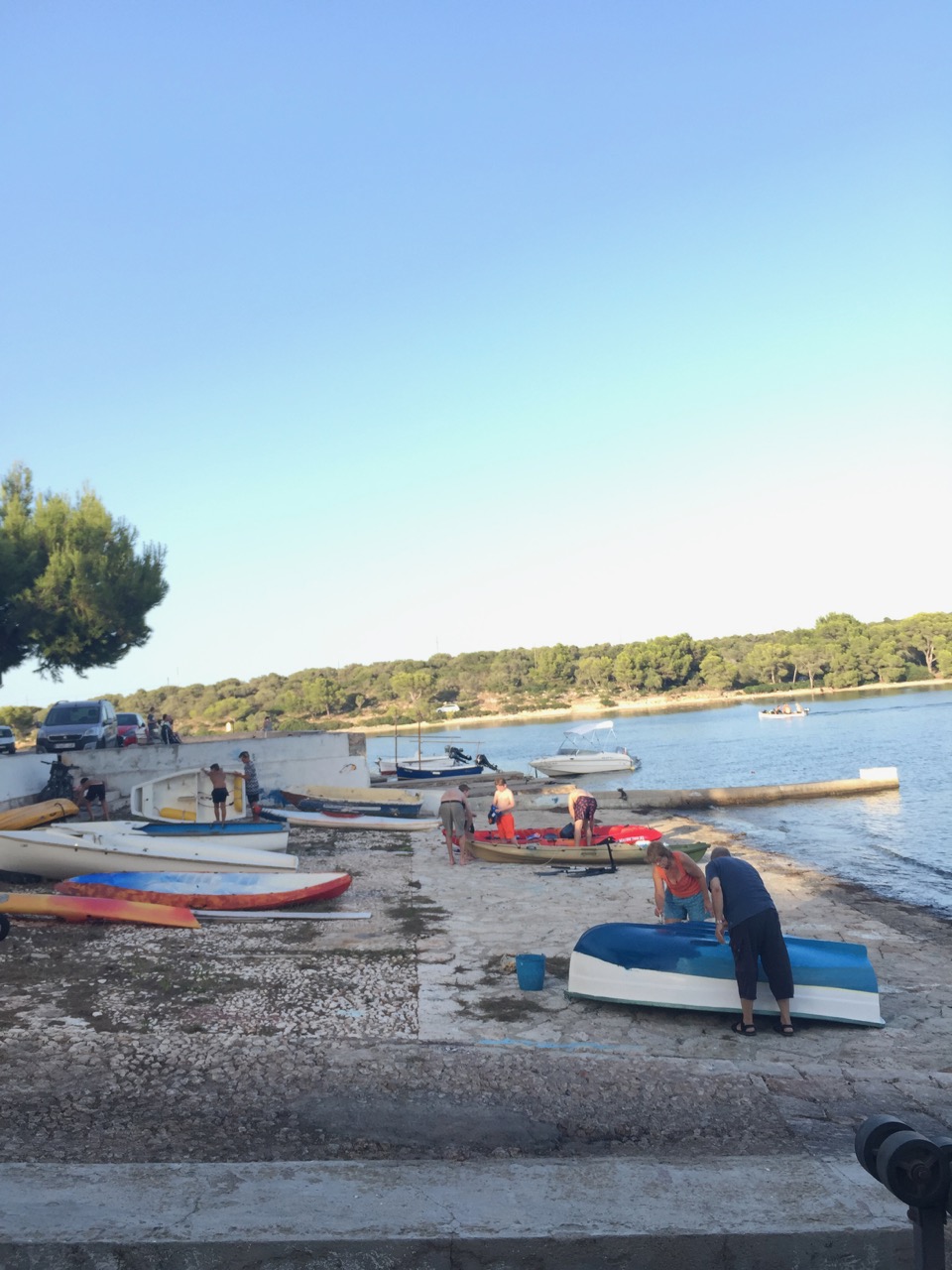 Shore life
A couple painting their boat, people returning from kayaking the bay 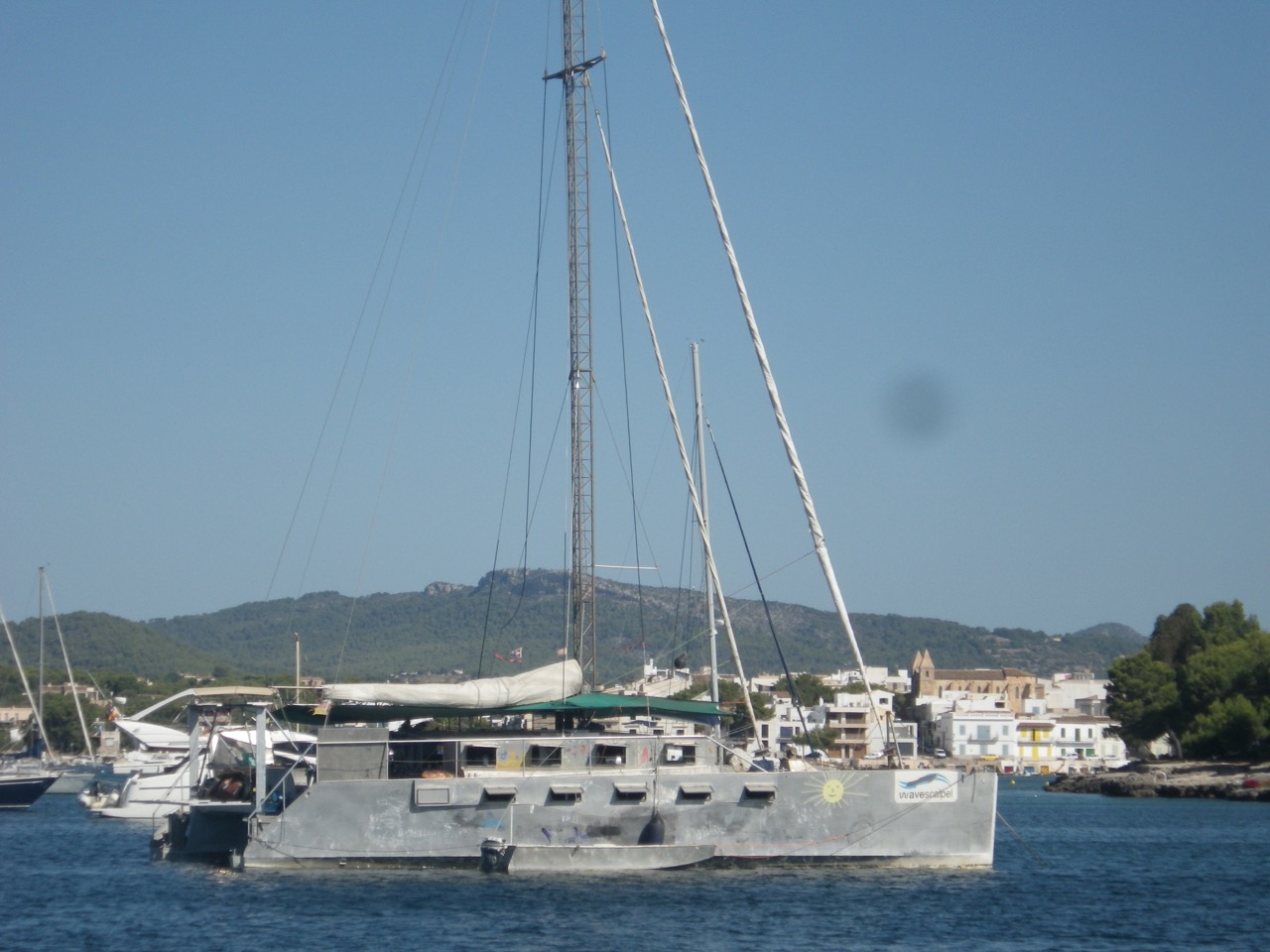 One of the neighbours
Very utilitarian looking catamaran

We stayed here for a week and it was lovely: snorkeling, catching up on work, reading books (Margriet), watching Star Trek (Jon). It was like being on holiday except we were not: this was our life now. It seemed like it couldn’t get any better. But then our backstay broke… That story deserves a post on its own.