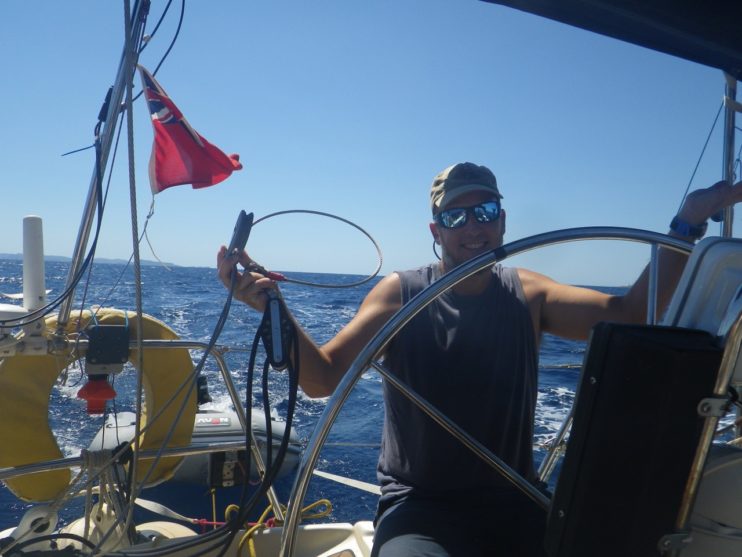 Sunday the 13th of August we left Porto Colom for the south of Mallorca. At first there wasn’t much wind so we engined. While I was inside working on my laptop, I suddenly heard some noise: Jon had caught a fish! Actually 2 at the same time, and shortly after another 3. Keeping the big ones and releasing the little ones, within 30 minutes we had 5 nice sized mackerels in our fridge and we decided that was sufficient for our dinner, so we took the lines back in. The wind picked up and around lunchtime we were able to put the sails out. Because we were going downwind we poled out the jib sail with the spinnaker pole. 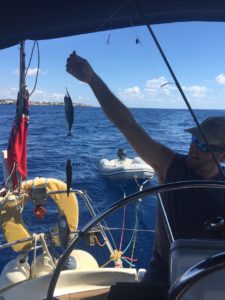 Oh oh, something is not right!

Around 3pm we arrived at Punta Salinas, the Southern tip of Mallorca. I was on the helm turning starboard to go west and while Jon was sorting out the spinnaker pole I suddenly noticed the block and multipliers from the backstay collapsing in a heap next to me. Miraculously they had missed the puppy who was sitting beside me on the cockpit seat. It took me 1 second to realise that the backstay had broken and it took me another 2 seconds to remember the word ‘backstay’. As soon as I figured it out I shouted: “Babe, the backstay is gone!”Without either of us understanding exactly what had happened, but both of us realising this was bad and we had to do something, Jon jumped into action and ordered me to steer into the wind while he rolled in the jib. I turned the engine on while he pulled the mainsheet to the center and together we lowered the main. Jon took the main halyard (the line that normally holds the mainsail up) to the stern and connected it to the hard point on the stern so this would act as a temporary backstay. 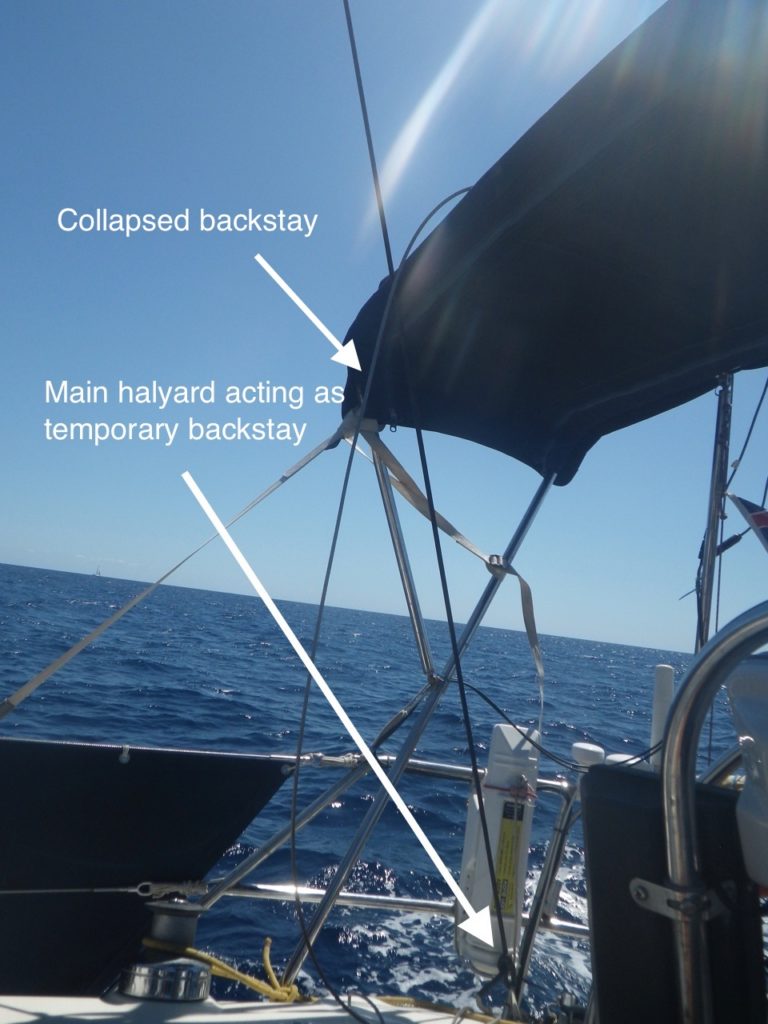 Only now did we have time to investigate what had happened. It turned out that the top of the block at the end of the backstay cable had completely corroded and broken off, causing the backstay cable to swing around freely around our mast and the other blocks and multipliers (connected to the stern of the boat) to fall down, narrowly missing my head and puppy’s head. 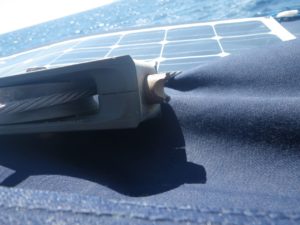 The broken block: the top of the metal eye had broken off

Luckily we had the sun cover up between our bimini and the spray hood so the culprit of it all, the corroded block, had fallen on this cover. If we had left the suncover rolled up, the force of it breaking and subsequently falling down could have caused some serious damage. There’s always an upside to everything!

What is the backstay??

The backstay is kind of a big deal. It is the line (or cable in our case) that runs from the top of the mast to the stern of the boat. It is the counterpart of the forestay, which runs from the top of the mast to the bow of the boat; the two stays together with the shrouds, on either sides of the mast, form the standing rigging. The main function of the standing rigging is to support the mast –  quite an important job.
A secondary function of the backstay is to allow the mast to be tuned whilst sailing: you can bend it more backwards or forwards to counteract the force of the sails. In order to do this, the backstay is divided into several parts, so you can pull it in or let it out without too much risk and without using too much force. For this reason our backstay consists of 2 blocks (the second one is not clearly visible in the picture below) and a multiplier. 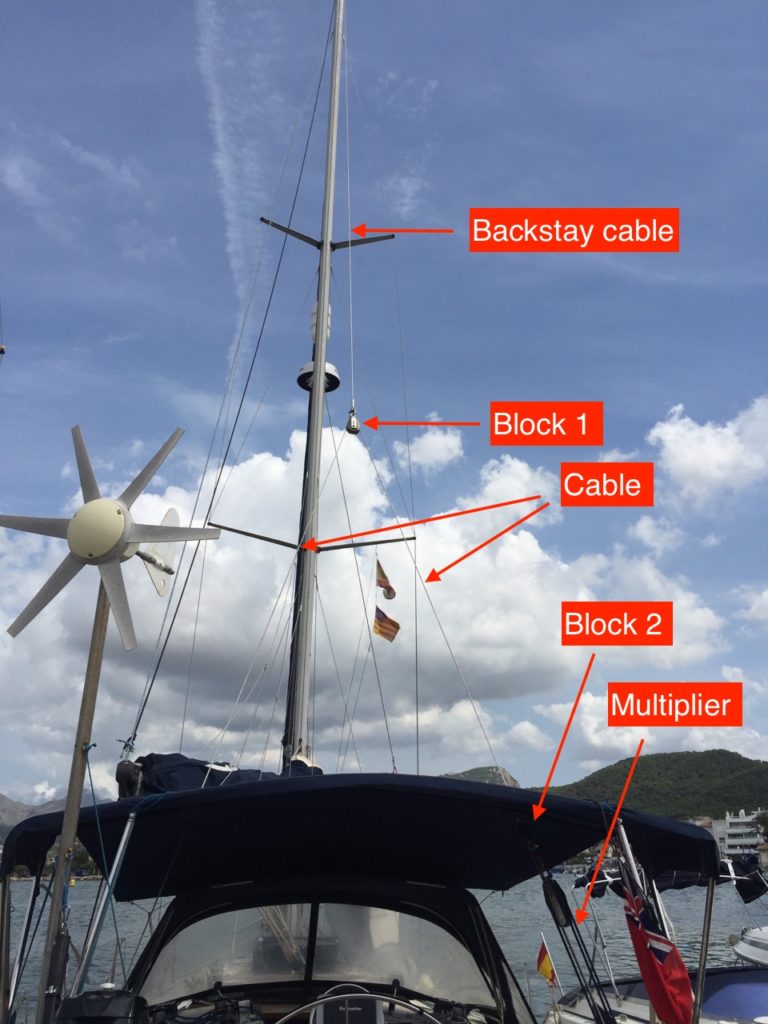 Now, we replaced all of our standing rigging last winter because the previous rigging was more than 20 years old and our insurance would not insure us for a de-masting unless we replaced it. While all the cables were being replaced, we were told that the blocks that were used by the backstay were of excellent quality and “would probably outlast the hull” so we did not replace those. Perhaps a trained eye could have spotted the metal corrosion on the block (block 1 in the picture above), but since it’s 3 meters up in the air it’s not something you check regularly.

What to do next?

The cable that was connected to the broken block and the top of the mast was now swinging loose around the mast. We had to tie it down, but that was easier said than done because it was more than 3 meters up from the deck. Jon fiddled around with the boathook and eventually managed to get a slipknot around the shackle at the end of the cable and tied it down to the boom. 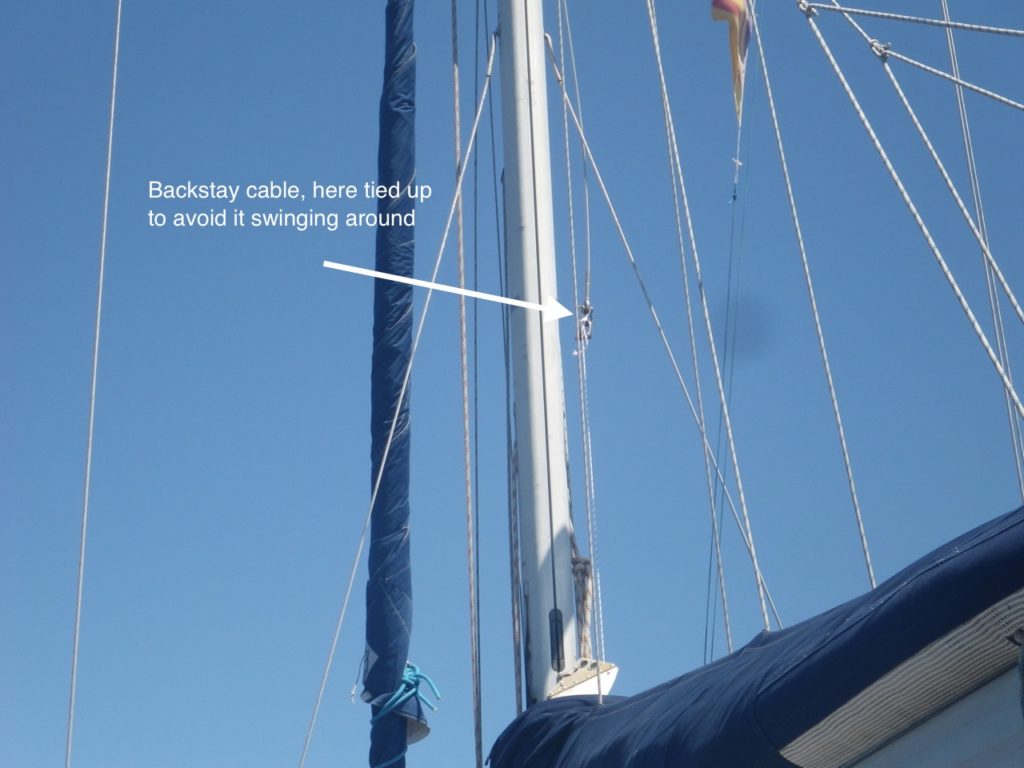 Given (luckily) we were in very light winds there was little danger of our mast actually collapsing once we stabilised it however you definitely don’t want to continue sailing or in any way or put extra pressure on the mast.
We had two options: we could continue to where we were going: a yet to be decided anchorage on the south of the island or we could go back to Porto Colom. It didn’t take us long to decide to turn around and head back up north to Porto Colom. We knew this was a sheltered anchorage with good holding and lots of space. We also knew there was a car rental, and it would only take us an hour to get to the chandlery in Palma to get a new block.
The three hour trip back to Porto Colom was a little bit tense as we were now going into the wind and into the waves, without our backstay. Suffice to say we were quite relieved when had the anchor down again in Porto Colom.

‘Just’ getting a new block

We decided to take a rest on Monday, so on Tuesday Jon headed up to Palma in a rental car while I stayed at the boat to do some work. When he arrived at the chandlery, it was closed though: it was a bloody bank holiday! We should have known better as Spain has bank holidays at the most unusual days (apart from national holidays there are also often provincial and local holidays), but we could barely remember what day of the week it was most days so let alone considering to check for the Assumption of Mary!
No major harm done though (except the expense of hiring the car), and on Wednesday off Jon went back to try again. Mission completed: he returned with 2 brand new blocks and a new multiplier mechanism. 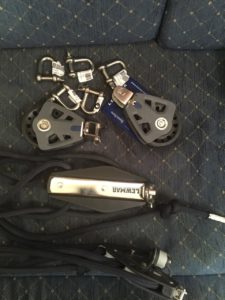 On attempting to fit everything back together on Thursday there was one problem: the cable that had to be fed through the block had a large ring on each end, which meant it did’t fit. If only the block could be opened up – like the old one – but alas, that was not the case.
So on Friday we were off to Palma once again to find out if we could change it for a different block that could be opened. Well, such a block did exist but the price we were quoted for it was over € 1000! Thankfully the lady serving us in the chandlery was very helpful and she suggested to re-use the old block (as that could be opened) but replace the top metal part that had broken with the part from the new block. This turned out a fantastic idea, and in the end it cost us less than € 100 to fix the problem.

A week later than planned we ventured out again to explore the south side of Mallorca. This time with a very solid backstay, which, regardlessly, we watched like hawks for hours. If your backstay goes, it could not have been at better circumstances then when it did for us: in calm weather, near the shore, with relatively easy access to replacement parts. Still, it’s one of those heart-stopping moments you can do without. 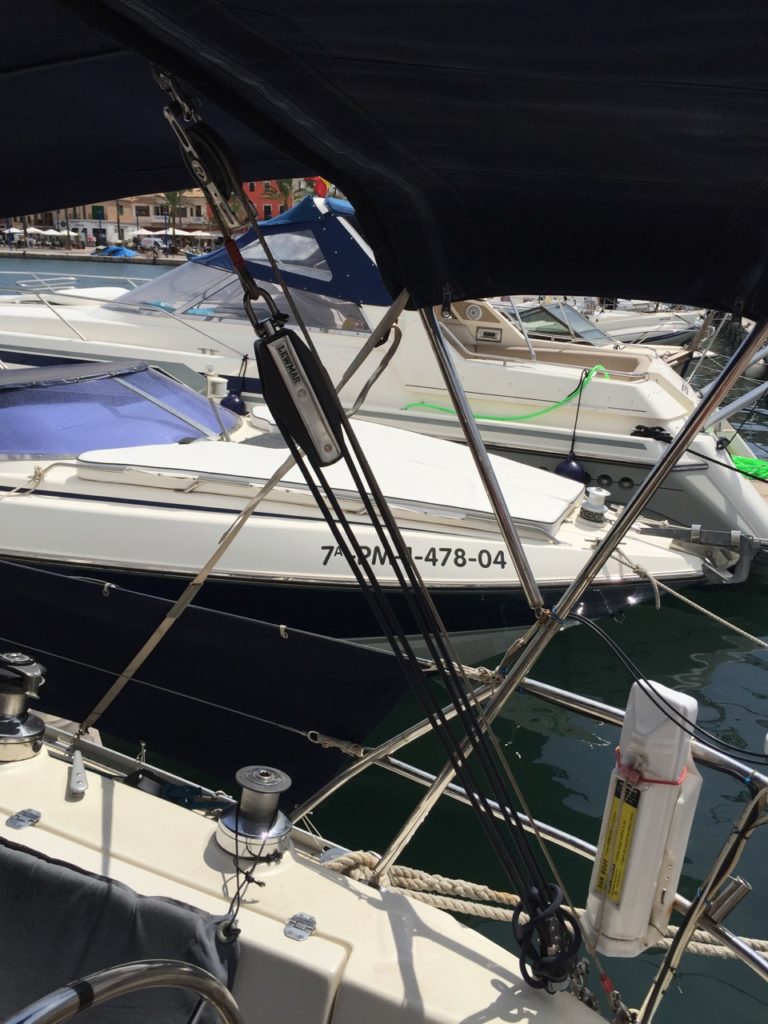