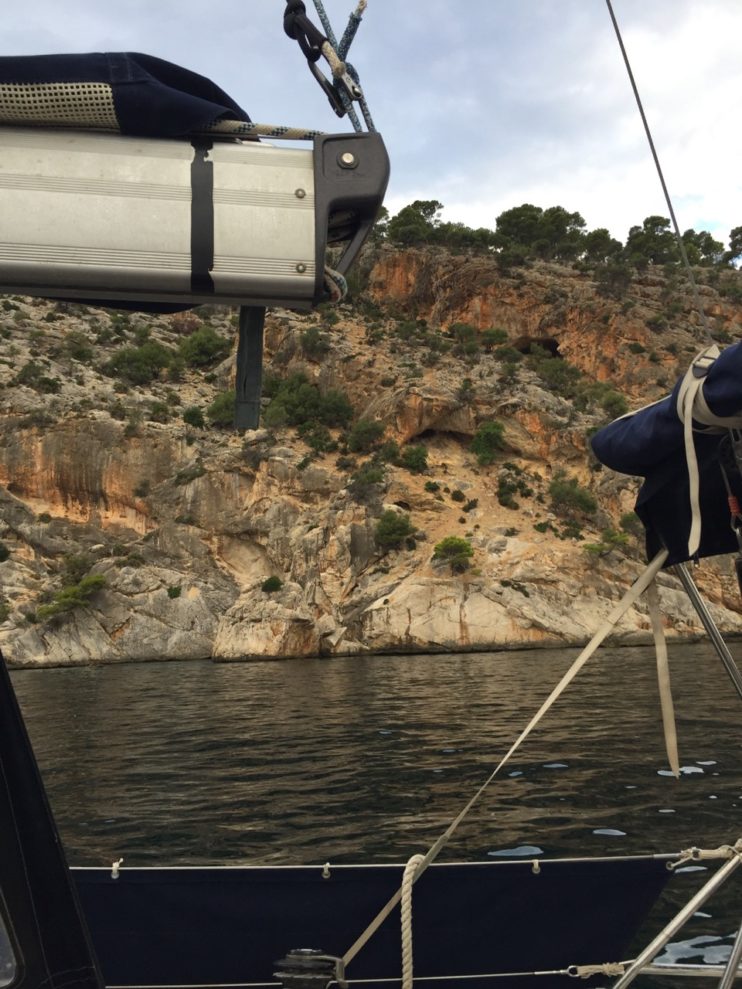 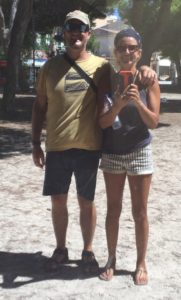 Compared to the east of Mallorca, the south coast was much more impressive nature-wise. Our first stop was a large bay to the east of a little town called Colònia de Sant Jordi. There were several places to anchor, but you had to look out for shallow rocks. We found a lovely spot off Playa d’es Carbó, where we stayed for 2 nights. It was a beautiful spot for snorkelling, while keeping a close eye on passing jetski’s and rubber boats.

We made a little trip to Colònia de Sant Jordi, which was a very small town focused on tourism. With kilometers of sandy beaches next to it, you can see why people would spend their holiday here. 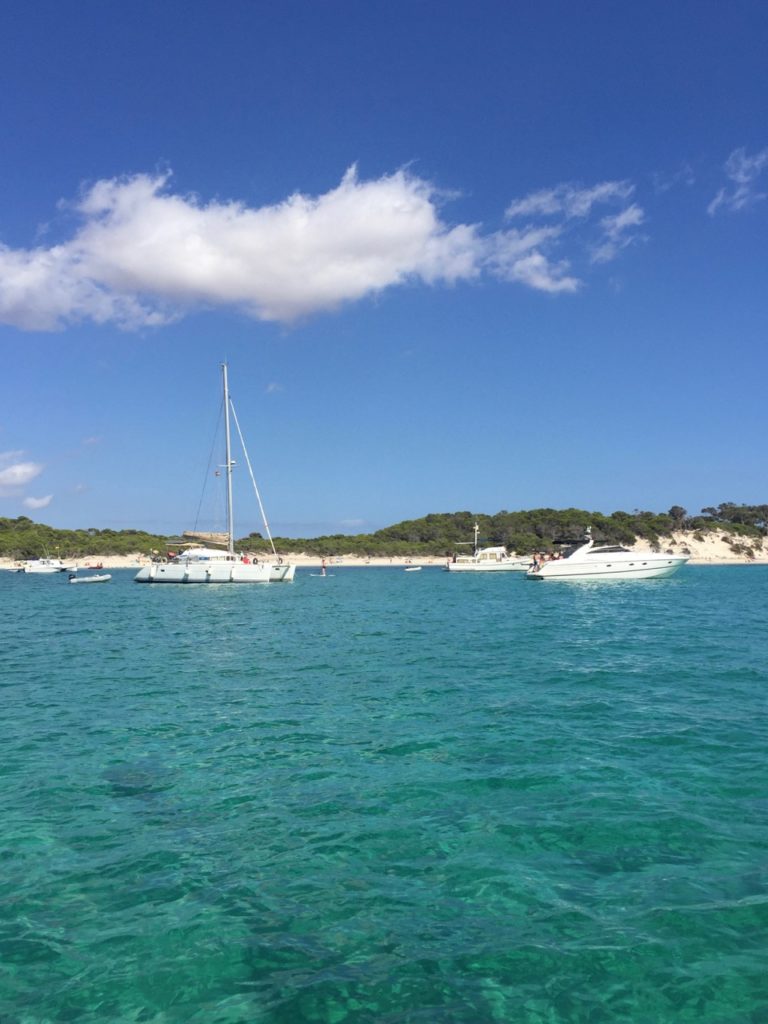 View on the beach in Playa d’es Carbó 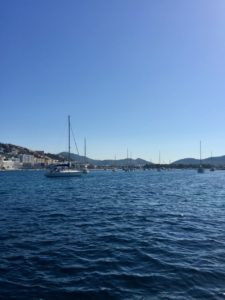 A 7 hour journey, equally divided between the engine and the sails, across the bay of Palma took us to Santa Ponsa; a well-known bay with ample anchoring space. We were surprised how little traffic we encountered while crossing the bay in front of Palma, the capital of Mallorca. We expected a lot of ferries and cargo ships, similar to Ibiza, but fortunately it was much quieter. The coastline changed dramatically on the west-side of the bay: instead of vast stretches of white sand with clear blue water, we were greeted by steep rocky cliffs with patches of pine trees.
On entering the Santa Ponsa bay we suddenly noticed that the foot of the mainsail was flapping: the shackle on the outhaul had come loose. We decided to lower the sail and sort this out later. The anchorage looked pretty busy from a distance, but once we came closer there was actually lots of space. We usually do a little round to find a sandy spot for the anchor: sometimes the water is so clear that you can clearly see the bottom and avoid anchoring in weed or rocks. Other times it is not so easy to see, and the most you can hope for is spotting a lighter coloured patch in the water. After dropping the anchor, we put the boat in reverse for about 30 seconds at around 2000 revs to make sure the anchor has good holding.

Time for a Goodvibes upgrade?

We were keen to get ashore because we needed to get some provisions and it would be good for Puppy to run around a bit. Somebody had told us there was a dinghy dock in the nearby marina but we struggled to find it. Eventually we just tied up at the end of a dock and crossed our fingers the dinghy was still there when we returned – which it was. (At the moment we don’t lock the dinghy to the quay or even the engine to the dinghy. Europe is pretty safe but if we venture further away we will no doubt need to take more precautions) 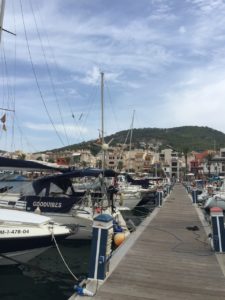 The weather was forecast to get a little bit more unstable so we booked ourself in to the Andratx marina. After pulling up the anchor and motoring out of the Santa Ponsa bay we hoisted the sail but something didn’t look right: while re-attaching the shackle of the outhaul, the second reef line was repositioned on the ‘wrong’ side of the sail. The solution was easy: the line needed to go on the other side of the sail, but the execution of the resolution took a bit of head-scratching. Eventually we worked out that we had to loosen the outhaul again, pull the mainsail towards the mast and on moving it forward to the end of the boom again, ensure all the reef lines were on the right side of the sail. Another problem fixed and another lesson learned.
In Andratx there are 2 locations to berth: one is right next to the town centre along a quay with many restaurants and cafés, the other one is on the other side of the harbour – a decent walk away from all amenities. We were hoping the governmental berths that we had booked into were on the town side, and luckily they were. This made it a lot easier to get some laundry and shopping done.

After 2 nights in the marina we moved to Cala camp de mar, only 5 nautical miles east of Andratx. Another windy spell was forecasted for a few days later and we decided that at that time we would go back to Andratx marina, so we didn’t want to venture out to far away. 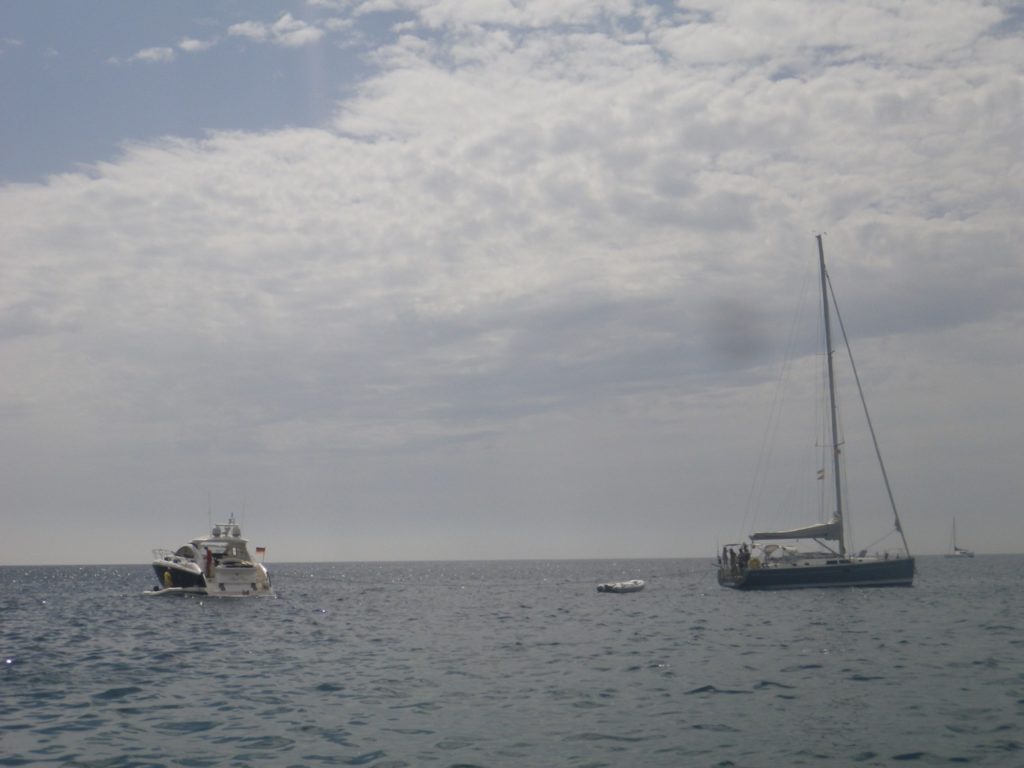 Just after we anchored we noticed that a sailing boat anchored next to us appeared to be towing a motorboat. We were observing this from our cockpit and soon it became clear that the motorboat had been anchored much further along in the bay but that his anchor must have started dragging. Perhaps they hadn’t reversed on their anchor to check it was holding! Somebody on the sailing boat managed to get onto the motorboat while it floated past,  to tie a line to its stern. Another hundred meter or so and the motorboat would have drifted onto the rocks. A dinghy approached with 2 people from the motorboat on board. They hauled up their anchor, started the engine and motored back to the other side of the bay. There they anchored again, and without any qualms dinghied back to shore again! They were obviously not too concerned about spending some time on board to make sure the anchor would hold properly this time. 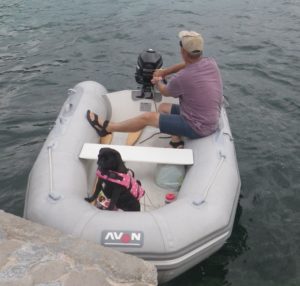 Going ashore in the pugboat

During the first night we had quite a lot of swell and the next morning the wind had picked up as well. We decided to move a few hundred meters up to a small bay called Cala Blanca. This was a bit better protected against the southwesterly swell and the following night we had a much better sleep.

In the end the wind did not pick up as much as forecast, but still we were happy to go back to Andratx for a few nights. The marina is very convenient and in the evenings there is a very pleasant atmosphere in the town due to the many eateries lining the quays.
We met up with some sailing friends we had met earlier in the summer in Gibraltar, which was fantastic as we hadn’t really socialised with anybody else for at least a few weeks! Although we did meet some fellow sailors in marina’s we stayed in, it is rare that you later end up in the same place at the same time. And in anchorages it is a lot harder to get to know other sailors, so we are super happy when we see some familiar faces. 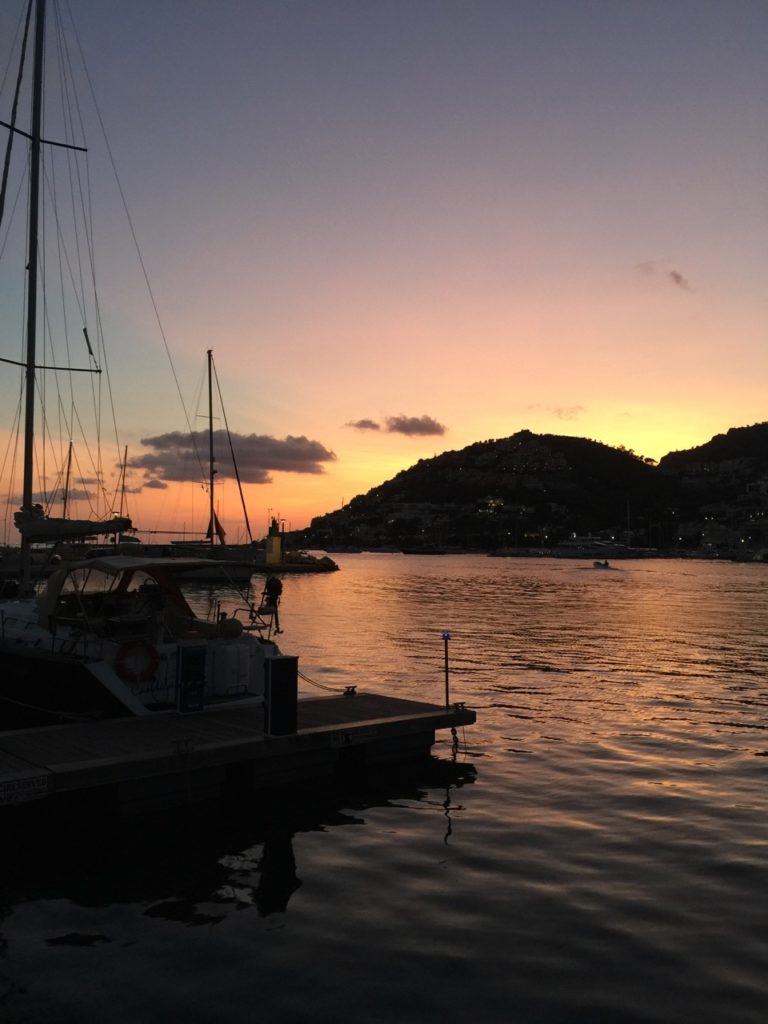 The weather was getting increasingly variable and we also had to start thinking about where we wanted to spend the winter. Rather than picking an unknown marina in an area where we didn’t know anybody, we reached the conclusion that we would return to Gibraltar. It has a lot of advantages for us as it’s close to our storage, close to our mailbox and we will near friends. It’s a familiar marina and apparently you can now get high speed internet which means we will be able to work from the boat without issues and we get to catch up on youtube video’s and Netflix! So our sailing adventure for this year was slowly coming to an end, but we did of course still have to sail back to Gibraltar.

One Comment on “Sandy beaches and rugged coastlines: south Mallorca”