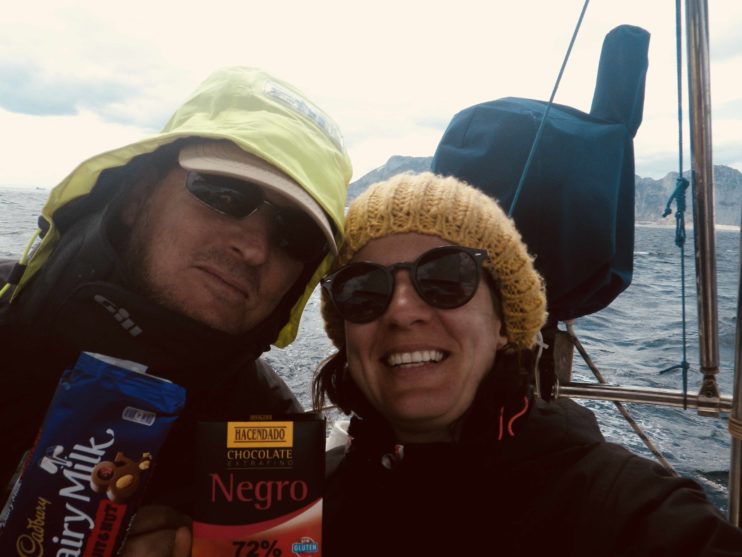 Preparing for our second sailing season

After being settled in Gibraltar for 7 months, we needed a few weeks to get sailing ready again. Because the weather had been so bad in March and April we hadn’t had a chance to do all the necessary preparations yet. 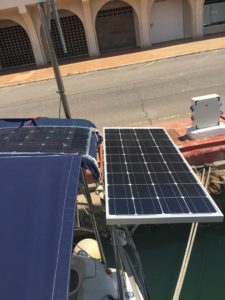 The main job was to fit our new solar panels. Last year we only had the 1 flexible panel of 100 watts which was nowhere near enough. It also got damaged during a heavy storm in January (we really should have taken it inside!) and was basically useless. So we bought 2 new flexible panels and 2 fixed panels. The flexible ones fitted nicely on top of the bimini, but the fixed ones required a bespoke fixture on to the bimini metal framework. Jon epoxied a piece of wood and attached the panels with metal clips. To keep the panels horizontal, he created two arms out of some left-over metal. We now have 400 watts of solar power which is more than enough to not even have to use shore power in marinas.

Another important task before leaving was provisioning. Last year we thought we did not need to bring a lot of food and drinks because you can basically buy groceries anywhere on shore, right? Well, it turned out that certain things can be hard to find in small supermarkets, for example squash and cereal not loaded with sugar. Secondly, shops are not always close to the marina and definitely not close to your boat when you are at anchor. You really want to avoid having to go to the shops every few days because it can easily take up half a day. Not to mention the prices local businesses charge when there is no competition from major supermarkets. 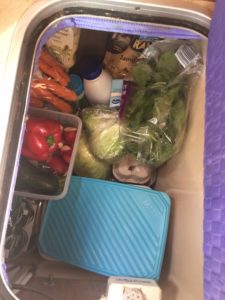 The fridge is not even full!

So this season we decided to stock up. For a few weeks I would buy essentials at every supermarket visit in Gibraltar: pasta, pesto, tomato puree, rice, baked beans and of course wine and chocolate. We squirrelled everything away under the sofa, in the v-berth and in the aft cabins.

Leaving the rock behind us

A few days before the end of April we removed our passarelle and dug out the sailing safety equipment we had stashed away for the winter. The mould had to be wiped of the life-vests and we had to ensure our gas-bottles were refilled. Now we just had to wait for the right weather!

Monday the 30th of April the wind was going to be westerly and although the wind was going to get up to 20 knots gusts, it looked a lot better than the days before when gusts over 30 knots were forecasted. My only concern was that we had not taken the boat out at all since we had arrived in Gibraltar in September 2017. Would the engine behave? Would something suddenly stop working? This worry combined with the weeks of anticipation and uncertainty of when we would leave, meant I did not sleep so well on Sunday night.

On Monday however, I was very excited to finally go sailing again. I made one last trip to the supermarket to get meat and fresh fruit and vegetables and cooked two meals for the passage. Jon did a last engine check and tidied up the last few bits and bobs. We said goodbye to some of our neighbours in the marina and around 1pm we untied the lines that had held us safe during the many heavy blows in the 2017/2018 winter. 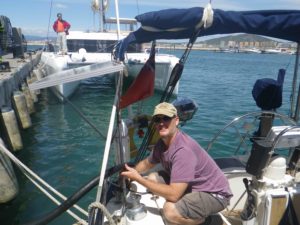 At the fuel dock

We headed over to the fuel dock and easily manoeuvred Goodvibes in place. All practice of the previous year was still somewhere lodged in our brain and bodies and it felt very natural to be on the lines (Margriet) and the helm (Jon) again. After filling up our tank and 2 jerrycans with diesel and another jerrycan with petrol for the outboard engine, we were as ready as we would ever be to once again leave the rock behind us and venture out in the Mediterranean. 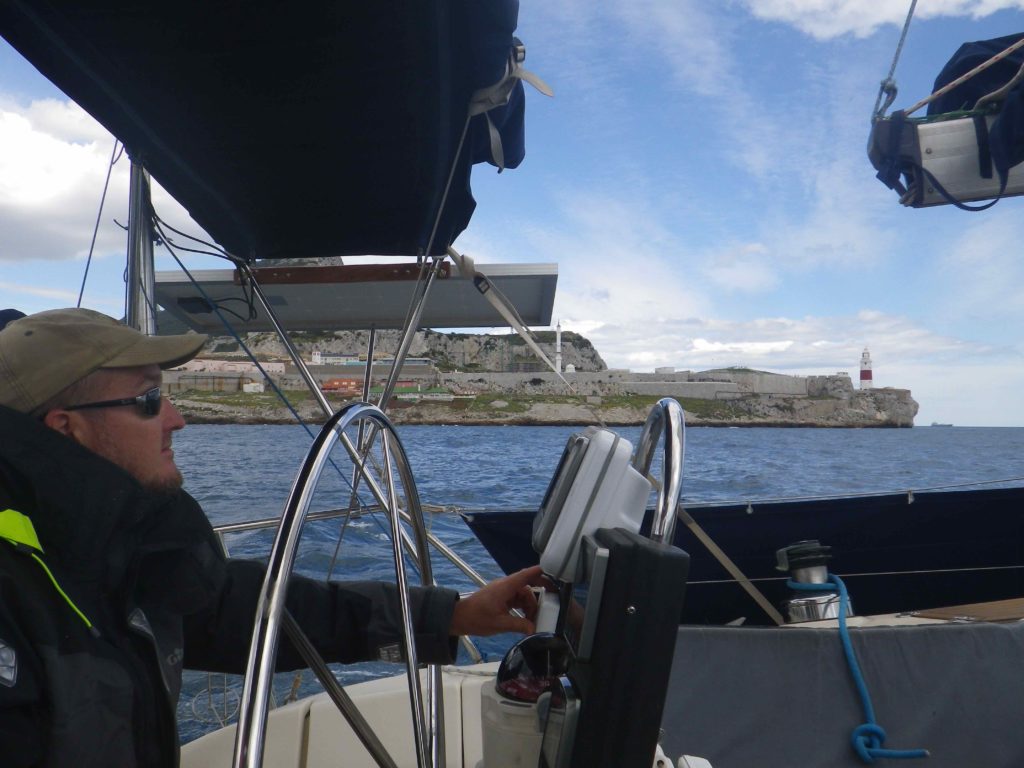 We took it easy going around the rock as we learned last year that the winds there can be very treacherous. As soon as we were on our course heading east, we turned off the engines. Thanks to the wind and the waves behind us we were making 6 to 7 knots. The tide was also in our favour and we kept going faster and faster. At some point we registered a new record speed of 8.9 knots!   We already had 1 reef in but we also made the genoa a bit smaller by adding a couple of extra turns. 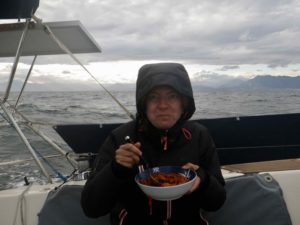 I was glad I didn’t have to cook because we were rolling quite a lot. It was hard enough to heat up the pre-cooked chili con carne without dropping plates etc. on the floor. Even though the wind was with us, the waves were a little bit mixed and coming at us from an angle. This caused Goodvibes to sway a lot from one side to the other. We had kind of forgotten about the impact this has and had not stowed everything properly: everything on the table had fallen on the floor, a bag full of milk bottles and juice boxes had fallen down and our food cabinet opened and spilled some tins and bottles on the sofa. During all this Puppy was happily snoozing on our bed.

After the sun had set, the wind almost disappeared. To keep a decent speed we had to turn on the engine. Jon was going to take care of the first night-watch and I tried to get some sleep. I didn’t get much sleep though, because the waves were still tossing us around. Just before midnight the wind picked up again so Jon put the sails back up. At 1am it was my turn to take the helm as Jon joined the Puppy in bed. With increasing wind (gusts up to 30 knots) the speed again started to reach 8 knots. I managed to roll in the genoa on my own but there was not much I could do about the main sail without Jon’s help. 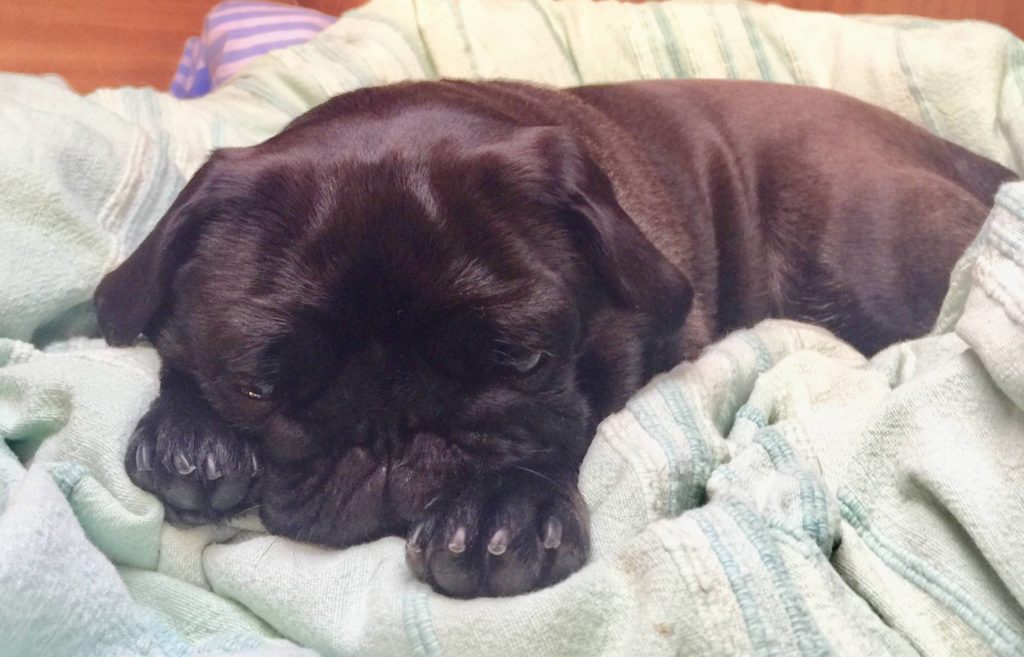 Puppy sleeping through all the commotion

Luckily he put his head out of the companionway at 3.30 am after we rode a particular big wave which made him roll around in the v-berth.We decided to put a second reef in. This didn’t go very smoothly as we had trouble to de-power the main and we were still being tossed around. We got it in though and this immediately decreased our speed to a decent 5 to 6 knots. I stayed on watch till around 4. There was very little traffic so I had a chance to listen to some podcasts. Jon’s second night-watch was fairly uneventful and by the time I got up again at 6am the wind had almost disappeared. I had to turn on the engine and we did not hoist the sails again.

A Swedish welcome in Almerimar

Our second day at sea was fairly uneventful except for some dolphins that joined us for about an hour just after the sun had come up. The sea slowly calmed down and the wind remained at around 5 knots. 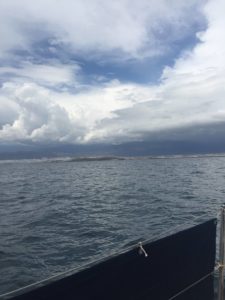 Menacing clouds on our arrival

The forecast had warned about a bit of weather on Tuesday late afternoon. Indeed, when we were getting close to Almerimar we could see huge cumulonimbus building up ahead of us. There was  even some lightning over the mountains behind Almerimar. We didn’t catch any rain but a 15 knot wind picked up just when we entered the marina, around 5pm. While we berthed at the visitors dock the marinero very kindly suggested to go to directly to a berth without checking in as it was very busy in the office. So we immediately continued into the marina.

While entering our appointed basin, we were greeted by Helena and Fredrik from s/y Wilma – waving on deck. We had met this Swedish couple in Gibraltar and they had arrived in Almerimar a few days previously. As great as it was to see some familiar faces, we had to concentrate on reversing into our mooring with a steady crosswind. Again, we quickly fell into the same routine as last season and Jon steered Goodvibes into the assigned spot without any issues. The lines were secured and we had officially completed our first sail of 2018! 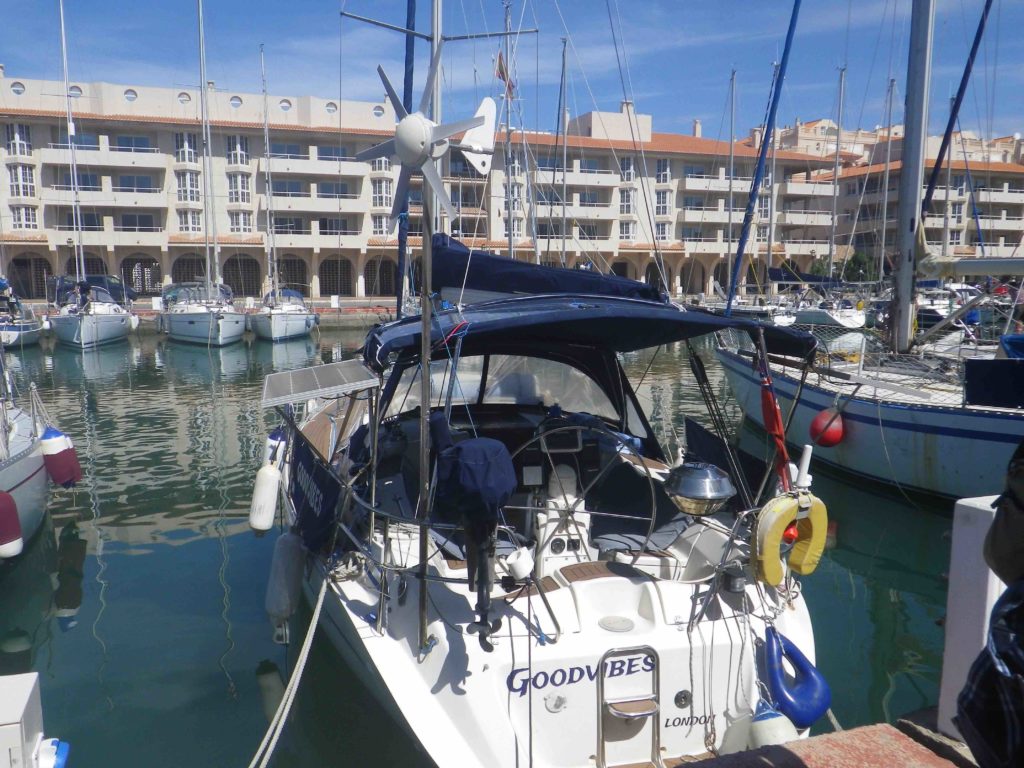