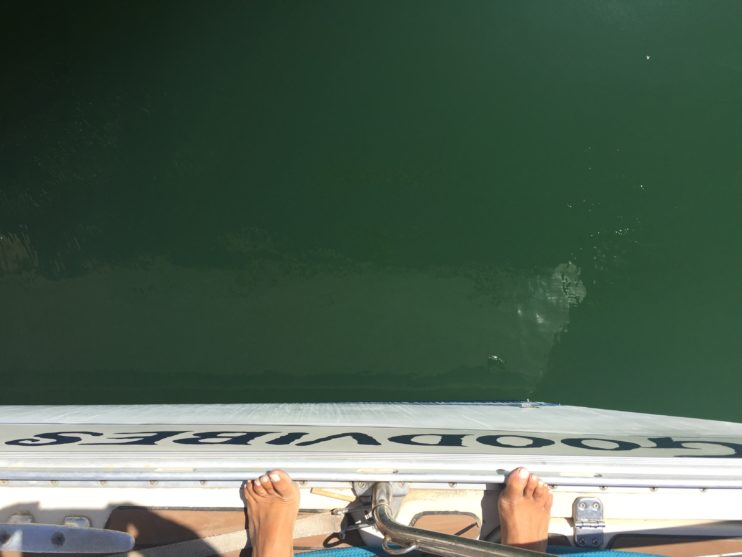 After spending a week and half in Almerimar we were ready to move on. But Goodvibes was not, and she is the boss so we had to listen to her. 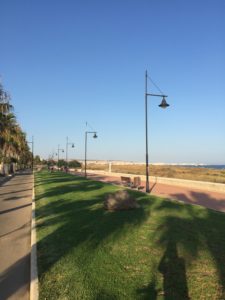 Beautiful long cycling path along the coast in Almerimar.

To begin with, there was still the engine issue: white smoke from the exhaust. Jon had chatted to an engine mechanic and he basically confirmed that everything that we tried so far is exactly what he would have tried up to this point (check and replace the exhaust elbow, clean and flush the heat exchanger, check the impeller, flush and replace the coolant… the list goes on). He suggested doing a few tests:

After some more googling, Jon came up with the idea to divert the seawater intake from the sail drive to the, newly installed, sea water inlet for the salt water tap. This way the entire sail drive mechanism would be bypassed. If the smoke still appeared, a blocked sail drive was not the cause of the problem, if the smoke no longer appeared, the problem was in the sail drive. You can see how his professional testing background serves its purpose 🙂 And yes: success! No more white smoke!
A separate test to measure the water being spit out via the exhaust confirmed that the water flow in the sail drive was some how partially obstructed, meaning not enough cooling water was coming through. According to the documentation, 18 liters of sea water should be exiting at 1200 revs. When using the sail drive we measured this to be only around 5 liters and using the diversion it was a very acceptable 20 liters. This lack of cooling water resulted in the engine running a little hot; enough to make steam from some of the sea water.  The most likely culprit for the smoke was some mollusk growth or other gunk obstructing the sail drive deep inside.
Thanks to an ingenious design from Volvo Penta, there is no clear route to run wire through this flow as it passes through an antechamber, none the less industrial strength cleaning vinegar does a great job of dissolving calcium… plan hatched. Since vinegar is much lighter than salt water, pouring it down the access line would have it sit nicely for some time in the sail drive doing the job of dissolving the stanky mussel growth. Alternating this pickling process with high pressure flushes through the drive from the fresh water hose on the quay seemed to do the trick.
After a couple of days of repeating this process we took another test drive in the bay and eureka it was confirmed: the smoke is gone!

On Friday 7 July we had tentative plans to leave but then the AIS started playing up. We had noticed on previous legs that we would occasionally get an ‘AIS connection lost’ message on the chartplotter. It had so far not caused any problems, but this time, when we turned on the chart plotter to program our route to Cartagena, neither AIS nor GPS information was displayed. It turned out there was a configuration conflict between the master chart plotter at the helm, and the slave chart plotter at the chart desk. After changing this, the AIS connection remained stable but nevertheless we decided to stay a little bit longer in Almerimar. There were 2 other important jobs to do: installing the radar (which we had bought in Gibraltar before we left and was taking up precious space in our port aft berth) and installing a bilge pump.

The radar goes up 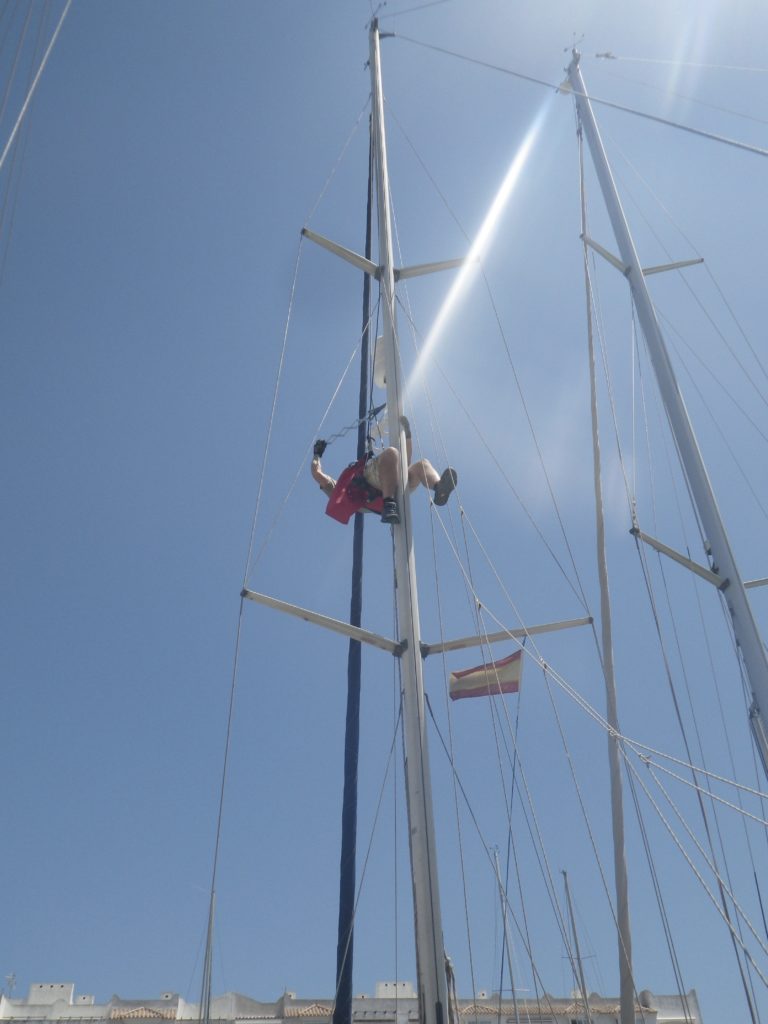 Pop riveting up the mast

Installing the radar was interesting. First the bracket had to mounted on the mast by drilling holes in the mast and fixing the bracket using a pop rivet gun. Then another, bigger, hole needed to be drilled for the wire to go down the mast. It’s not a very pleasant thing to do: drilling in your mast. You don’t want to make any mistakes and end up with unused holes in what is arguably one of the most important parts of your boat. But all went smoothly and Jon could drop the electricity wire through the hole while I fished it out at the bottom of the mast. Now it was time to drill a hole in the deck: also great fun! The wire was fed through and directed via the ceiling of the v-berth and the back of our clothes locker to the electricity panel. This was another situation where Jon’s background came in very handy: it takes somebody with quite some knowledge of electronics to deal with the mess of wires hidden behind this panel.
The last and most terrifying part of the radar installation was hoisting up the radar and putting it on the bracket. The radar has a diameter of probably 80 cm and a height of 20 cm. It was quite awkward to handle and had no means of attaching a safety line to it. We pulled it up the mast using a shopping bag and then, halfway up the mast, Jon had to take it out of the bag, place it on the mounted bracket and screw it on – obviously without dropping it or bumping it off the bracket before he had fixed it! A nail biting 5 minutes later our radar was solidly fixed on the mast and after finishing up the wiring, our first radar picture appeared on the chart plotter! Now we have to learn to interpret the data, which apparently is not so easy. We probably won’t use it so much on short trips under normal weather circumstances but it will be invaluable in fog and on longer passages. 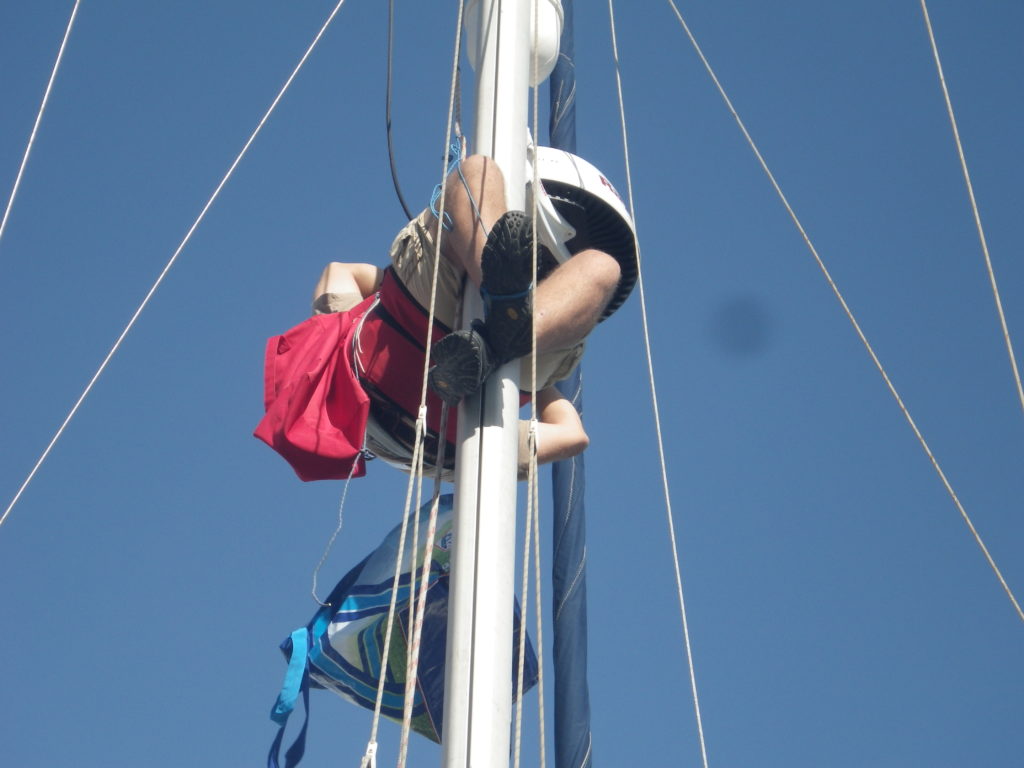 Moving the radar from the shopping bag (thanks Aldi) onto the bracket.

Let’s hope we never use it

Organised chaos behind the electronics panel

A lot of equipment on board you hope you never have to use. An heavy duty bilge pump is one of those: nobody wants to get water in the bilge because that means that either something is leaking or, worse, that you have a hole somewhere where you definitely do not want it. However, if one of those situations does occur, you would probably give up your left arm for a bilge pump. We do have a manual one but using it for an extended amount of time (i.e. more than a few minutes) is quite tiring and it is much slower than an automatic one.
The installation was not a big job, but like every project on board: it takes time. A drainage pipe has to be cut to size and put in place in order to move the water from the bilge (in the middle of our saloon), via the space below the fridge and oven in the galley, to the outlet at the stern. The electricity wires had to be fit from the infamous electricity panel, via the space below the starboard bench, the space beneath the v-berth, and the space below the sink in the heads to the space below the port bench and, eventually, the bilge. Of course electricity and water don’t work very nicely together so all wires had to be properly sealed and insulated to ensure they would not short when submerged in water. Done and dusted, we should now be able to remove any unwanted water from our home at a rate of 2000 gallons (more than 7000 liters) per hour.

With a much safer and happier boat and crew we were now definitely ready for a change of scenery.

7 Comments on “More boatjobs in Almerimar”