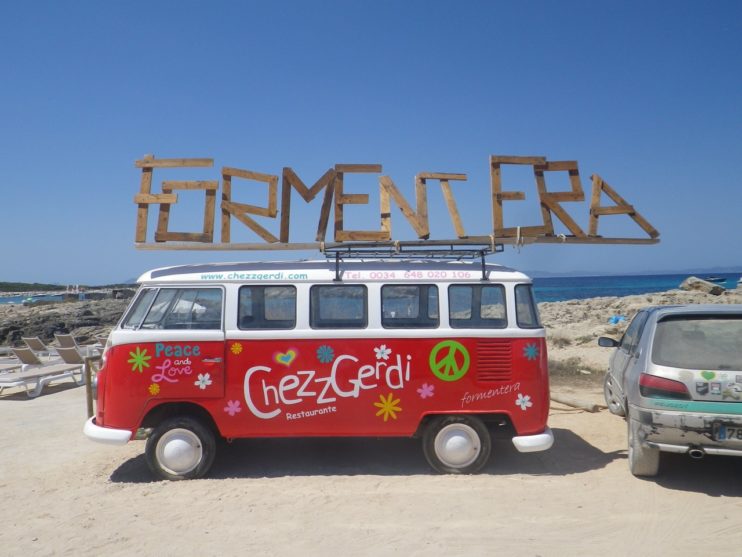 Waves higher than 2 meters are not fun. When you get them straight onto the bow, the boat surges upwards and comes down again with a loud bang – the hull slamming flat on the water. When you get them at an angle, the boat heels over one way and then – after the top of the wave – quickly switches to tipping over to the other side. Basically very uncomfortable. We had been going like this for about two hours on Wednesday 19 July. The forecast had been little swell and little wind, so we thought it was a perfect day for crossing from Mar Menor to Ibiza. This was going to be a trip of 140 nautical miles (which would take us about 28 hours). But we found out as soon as we left Mar Menor that the swell was a lot higher than forecast – in fact it was really taking its toll on the engine, which struggled to maintain an even power, and in fact on the entire boat, as she was being tossed up and down and swung from left to right. We agreed this was not a good start of what would be our longest journey so far so we decided to turn around, anchor at Mar Menor and reconsider our options.

Instead of crossing straight across to Ibiza, we decided to continue up along the coast. That way we could still progress in small increments even if the weather or waves were not cooperating. At the end of the afternoon, on Friday the 21st, we passed through the bridge at Mar Menor for the 4th time and headed out towards Moraira, a little marina just passed Calpe. The swell had decreased and for once the wind was favorable so we were able to sail most of the time. 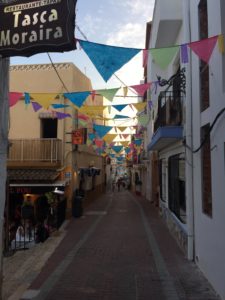 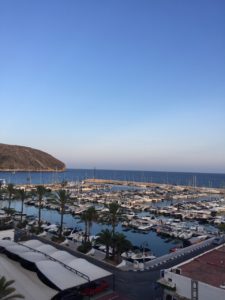 The Moraira marina turned out to be more of a yachtclub with most berths reserved for club members but luckily we managed to get one of the last visitor berths. After a shower, water refill, putting all equipment on the charge and giving Goodvibes a rinse off, we had some time in the evening to stroll around the little town which turned out to be very charming. The local feria was on, but as is customary in Spain it didn’t start till late that night; by that time we would be in our berth to get a good night’s sleep as we would leave at the crack of dawn the next day for Ibiza. As we were now much closer it was going to be a 53 nm trip – doable in 1 day.

Playground for the rich 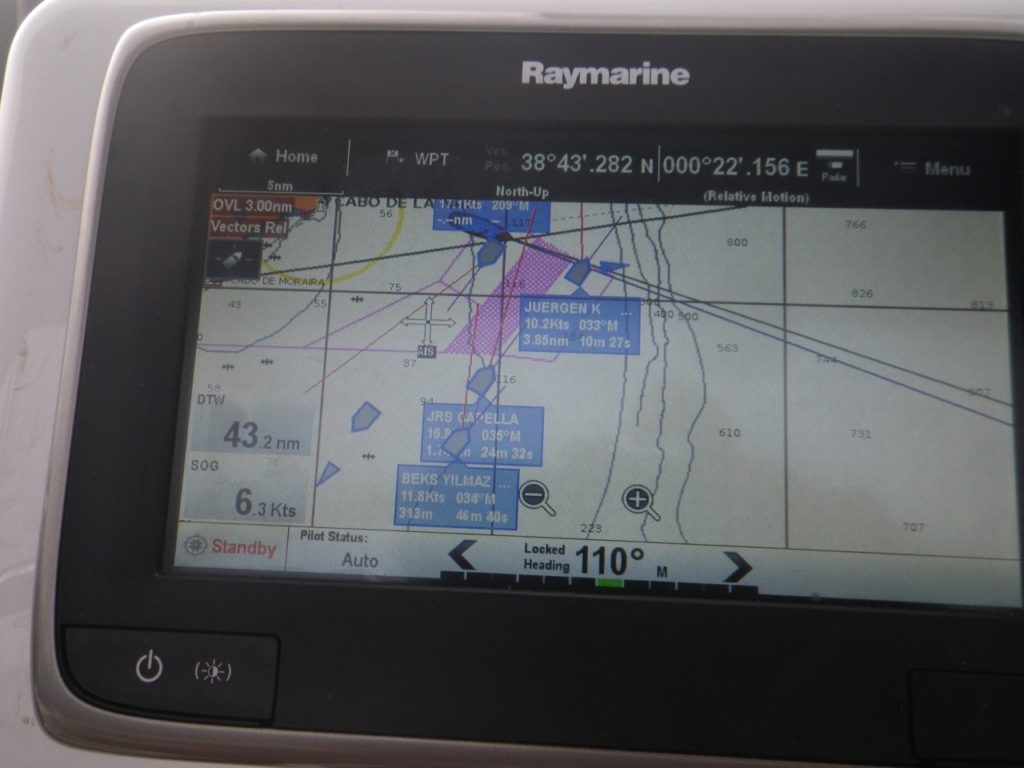 Keeping a close eye on the big guys – ‘Beks Yilmaz’ was of particular concern as we would be crossing at a distance of only a few hundred meter (313 m at the time of when the photo was taken).

Crossing the traffic separation zone just off the Spanish coast was interesting: it’s like crossing a motorway in very slow, slow motion. You can see the containerships (doing more than 20 knots) on AIS more than an hour before they will reach you. In that time you are constantly evaluating if you should adjust your course or speed in order to avoid a close encounter, while at the same time trying to anticipate what the big guy is doing: is he slowing down because he has a slower ship in front of him, is he going to head for France and turn a sharp left at the end of the traffic separation zone, has he seen us??

A few hours after dodging the various freight ships, we approached Es Vedra, a small island to the west of Ibiza. We continued for Cala Port Roig on the south of Ibiza which would give us shelter from the northeasterly blow that was forecast for Mondaynight. It was pretty busy in the cala but there was still space for us – although it was a bit hair raising dropping the anchor in between huge motorboats and fancy catamarans. Ibiza is a popular choice for people with money, no doubt about it. We saw 15-year olds driving dinghy’s with bigger engines than we have on Goodvibes. 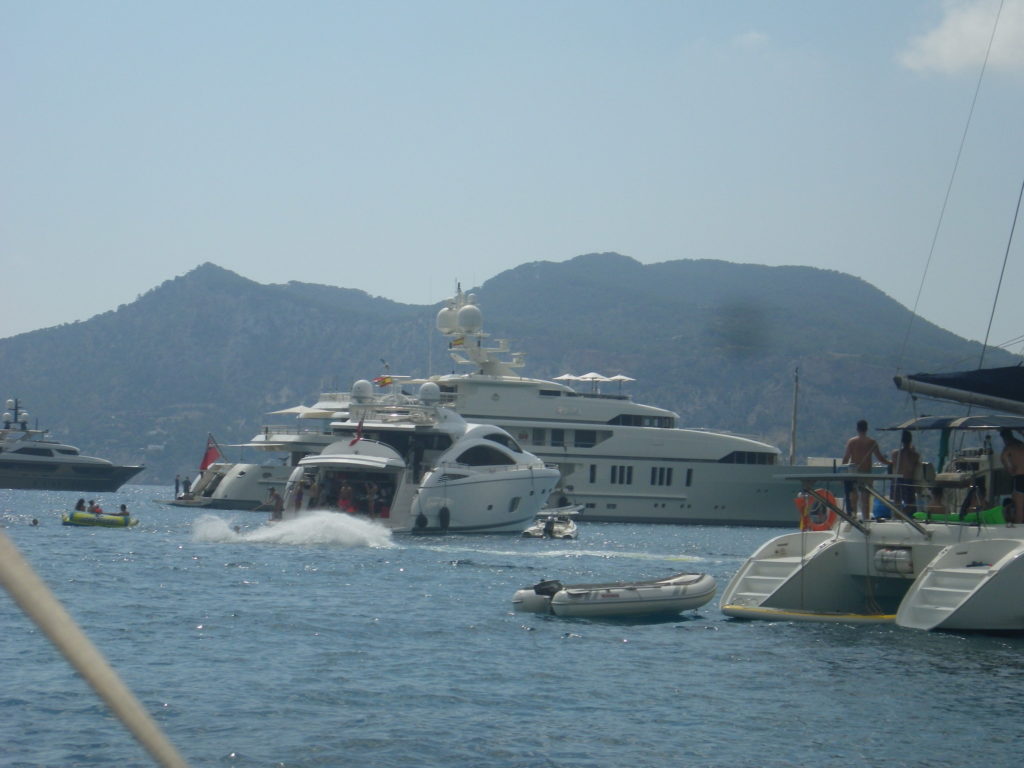 Out come the toys!

Several shiny motorboats opened the storage area at the stern and unloaded a collection of toys: jetski’s, floating trampolines, floating sofa’s, water scooters, self-powered wakeboards, flyboards etc. Puppy was very busy barking at all these strange motorised vehicles whizzing past. It was fun to watch, and the water here was definitely much nicer to swim in than in Mar Menor, but it was not exactly our kind of environment.

A beautiful place but not very tranquilo 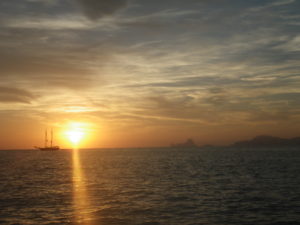 Sunset in Formentera, Ibiza on the right

We were not sure the rest of Ibiza would be any different so we headed to Formentera instead. This is a small (roughly 10 miles by 10 miles) island very close to Cala de Port Roig. The waters here were also very, very busy with high speed ferries, sailing boats and speedboats all going in different directions. We anchored close to the marina on Formentera so that we could drive in with the dinghy to get some provisions and walk the dog on the shore. Unfortunately there was no place in the marina to tie up your dinghy, and the beach was crowded with swimmers: not the kind of place to drive in with the outboard and to leave the dinghy unattended. Also, being close to the marina entrance meant getting a lot of wake from the frequent ferries (every 5 to 10 minutes one would shoot past). The beach, water and sunset were amazing but not being able to go ashore and the bouncing around all day and night made us move on again the next day. 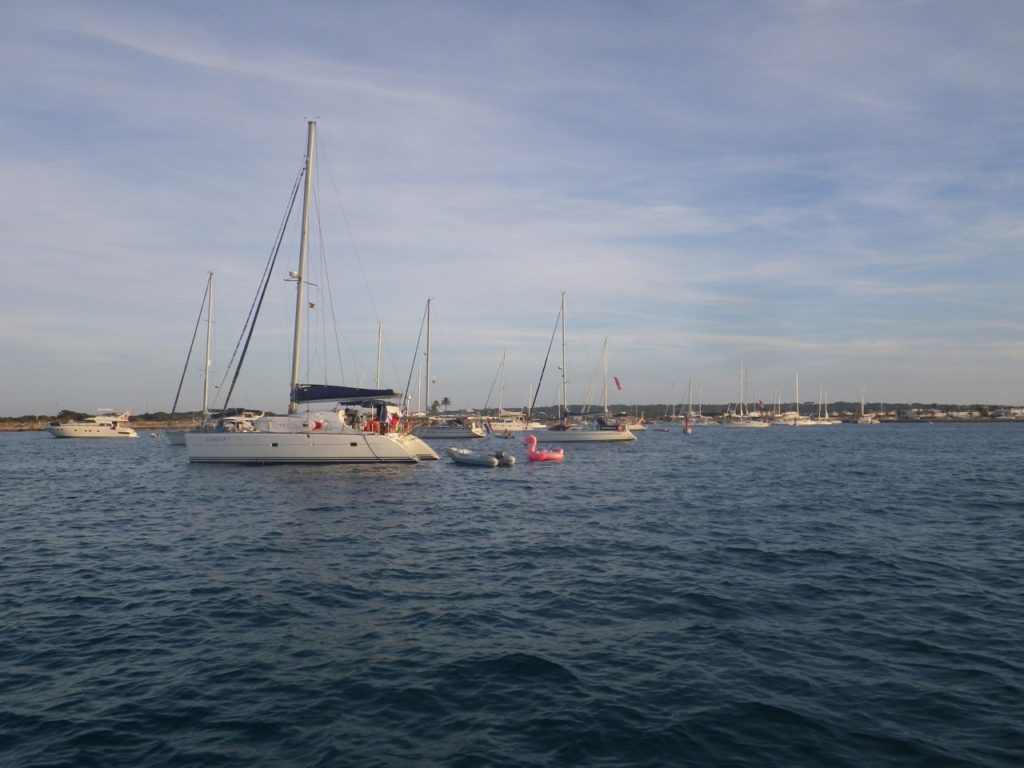 Hello neighbours! (Quite a lot of them)

We had a fantastic few hours sail to the other (east) side of the island and there we found exactly what we were looking for: a charming fishing village with a quay to tie up the dinghy and some small shops.

Peace and quiet in beautiful surroundings 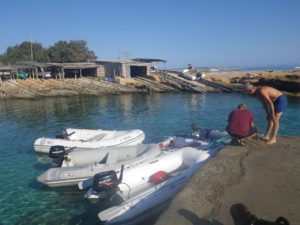 Tying up the dinghy

This place was like in the pictures: clear blue water and white beaches. When we arrived there were quite a few other boats at anchor but the next few days this thinned out to only a handful. The little village consisted of 2 small supermarkets, 2 or 3 restaurants, a moped/bike/car rental, some houses and not much more.People were swimming in the shallow rocks around the dinghy quay which was next to the launching tracks for the local fishing boats. It was a breath of fresh air.  We spent the next few days snorkeling, driving around Formentera on a rented moped and finally experiencing one of the best parts of cruising life. 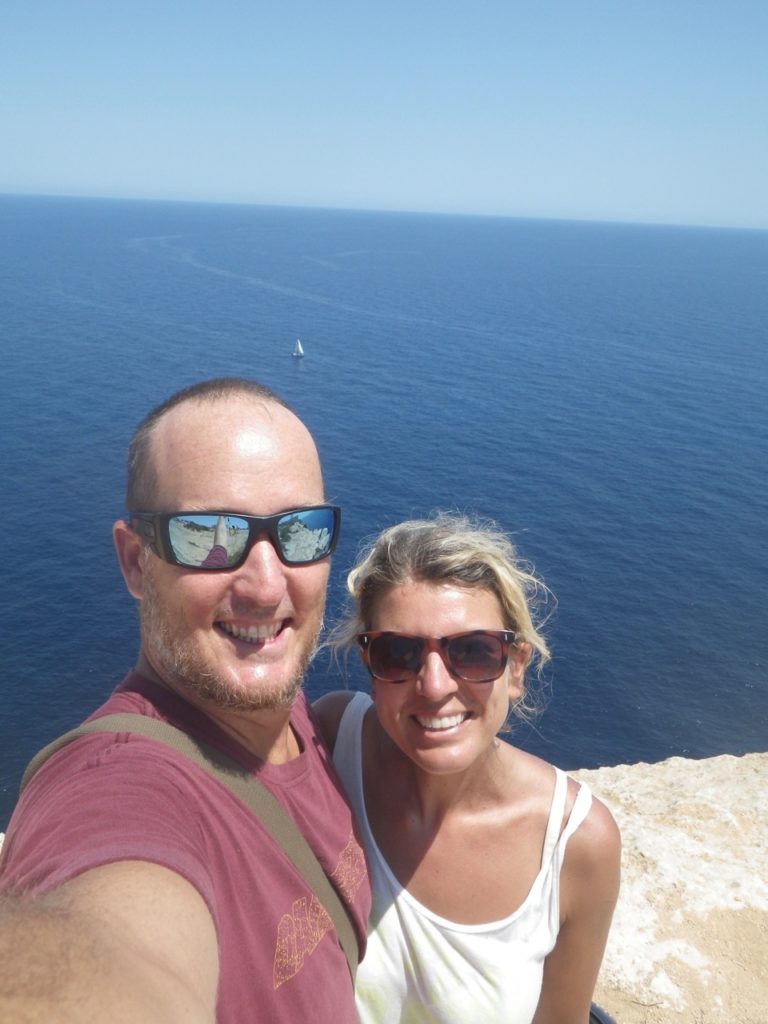 At the southernmost point of Formentera. No, of course, that’s not Goodvibes in the background

3 Comments on “Sailing Ibiza and Formentera: beautiful and busy”