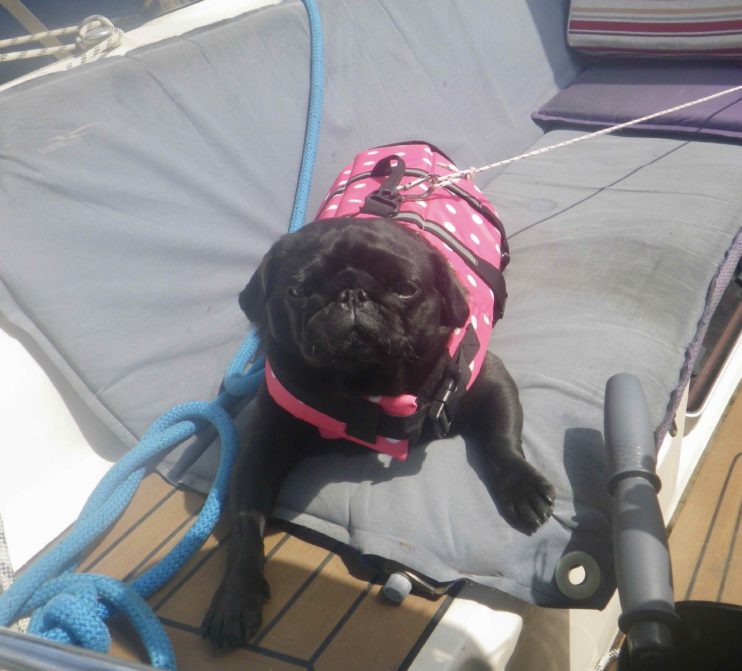 It is Wednesday 9th May 2018, 14:03. We have just left the anchorage in Aguilas and are heading towards Cartagena 25 nautical miles away. There is very little wind so we had to put the engine on. We want to arrive in daylight so the speed under sails of 2 nm was not really fast enough. So far it is a very comfortable passage as the sun is warming up nicely and there is no significant swell.

This was not the case 2 days ago: it was getting so rough that we had to turn around and wait for the weather to ease off. We left the anchorage in Almeria earlier than planned because the Guardia Civil chased us away. (We were anchored quite close to the marina entrance).

Initially there seemed to be no wind at all. Then it went quickly up to 20 knots so we put a reef in. We were doing approximately 5 knots but with the waves coming at an angle we were bashed around. The food cabinet opened again (we must fix that!) and the contents slid around on the floor. Puppy was in the v-berth. When I came to check up on her she stood up but due to the quick up and down movement of the bow she was actually airborne for a brief moment!

We were on our way to rounding Cabo de Gata – a notoriously windy cape. By now we had already put 2 reefs in and had rolled in the jib as the wind was up to 25 knots. We decided to turn around and see if the weather was a bit calmer closer to land. That proved to be a good strategy as indeed the winds eased off and we were no longer tossed from side to side. 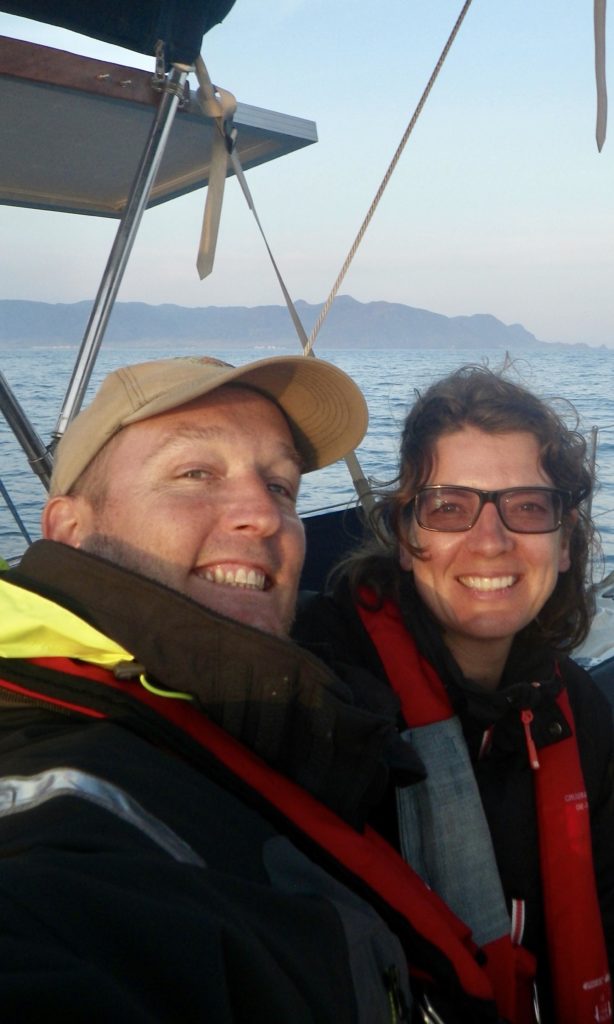 Passing Cabo de Gata on our second try, in much calmer seas

Anchoring in the dark

We had left together with 2 other boats: s/y Wilma (a Swedish concrete boat owned by Helena and Fredrik who we first met in Gibraltar and caught up with in Almerimar) and West Monsun (a steel boat also owned by a Swedish couple, Sten and Annika). They did not have any problems with the wind and waves because their boats are about 3 times heavier than we are. As a result they cut through the waves whereas we tend to bounce around like a cork in a washing machine.

Wilma and West Monsun had therefore already arrived at the anchorage by the time we arrived around 10.30 pm. We would have to anchor in the dark – a first for us, and not something that is advisable because it is hard to see rocks, buoys or other obstacles. We could see the anchor lights of the other 2 ships so approached slowly. Fredrik was out on deck with a torch to help us find a good spot. We lowered the anchor and luckily it set the first time.

It was a pretty tiring day, with a total of 6 hours sailing under difficult circumstances and more than 3 hours on the engine. Unfortunately we were not getting much sleep that night because the swell was coming into the anchorage and we were rolling around the whole night. The next morning we noticed quite a few buoys very nearby that we didn’t see at all last night, so it’s definitely not recommendable to arrive after sunset.

A view like this is still worth any anchoring woes

Anchoring in the rain

The next day the captains conferred via Whatsapp and the decision was made to leave around 9am. The wind forecast was pretty good for the first 12 hours but then very little for the next 6 to 10 hours. We could either try to make it all the way to Mar Menor but that would very likely mean having to motor through the night. So we decided to follow the Swedes to an anchorage in Aguilas, halfway to Cartagena, to get a (hopefully) good night’s sleep.

This time we had an absolutely fantastic sail: 10 hours with a 15 to 20 knots running wind. The waves were on our bum and we sped along regularly doing 6 to 7 knots. After lunch I spotted a turtle! We had seen very little wildlife so far, hardly any fish or dolphins, so we were pretty excited to see this little swimmer.

The last 2 hours the wind died off and we had to engine the last part into the anchorage. As we approached, we say grey clouds over the town of Aguilas. About 20 minutes before we came in it started to rain. As soon as we were behind a large breakwater, we put down the sails taking care not to slip on deck. We passed West Monsun, who had already arrived, to anchor on their port side. We dropped the anchor but it didn’t hold. When I got it up it had turned into a christmas tree (i.e full of green seeweed). I scraped it off with the boathook and we tried again. The second time was also unlucky so we decided to keep a closer eye on the sea bottom to see if we could spot a sandy patch. We dropped the anchor right in it and, third time lucky, we were set.

Jon stayed outside for another 20 minutes to return the favour by helping s/y Wilma to anchor. They set the first time and we quickly got out of our wetgear and boots to have a glass of wine to warm up. 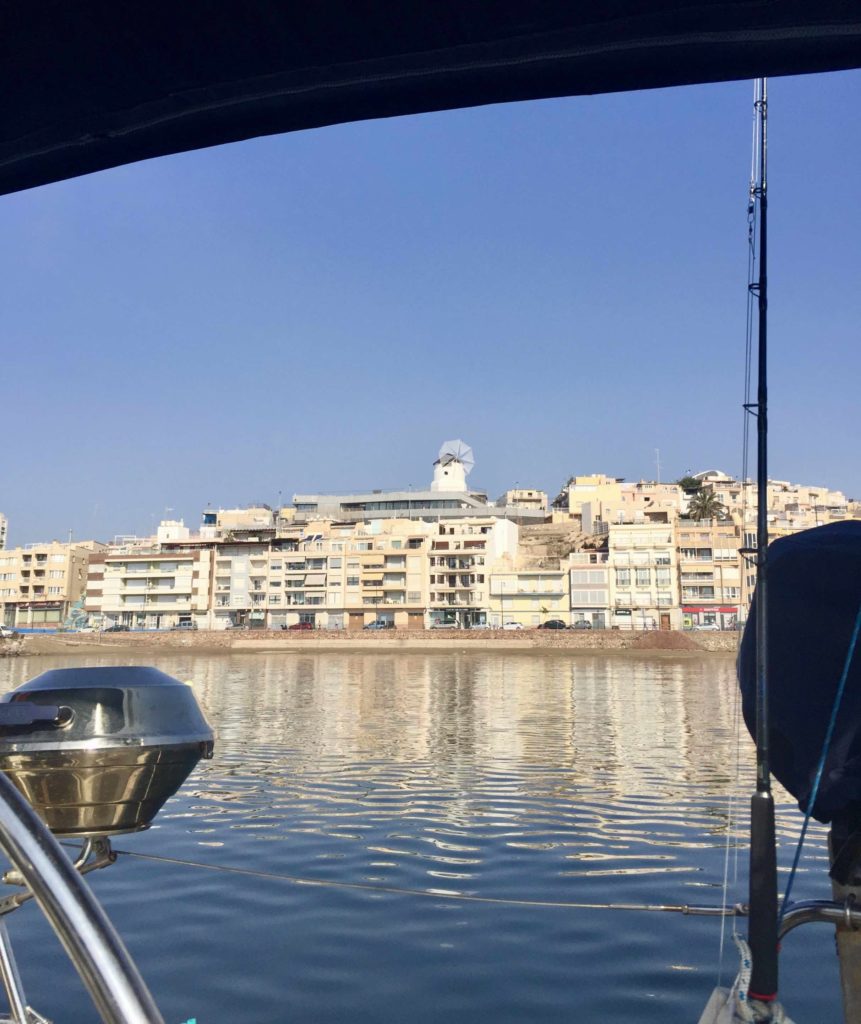 The rainy anchorage of Aguilas in daylight and with sunshine

4 Comments on “Sailing in bad weather around Cabo de Gato”