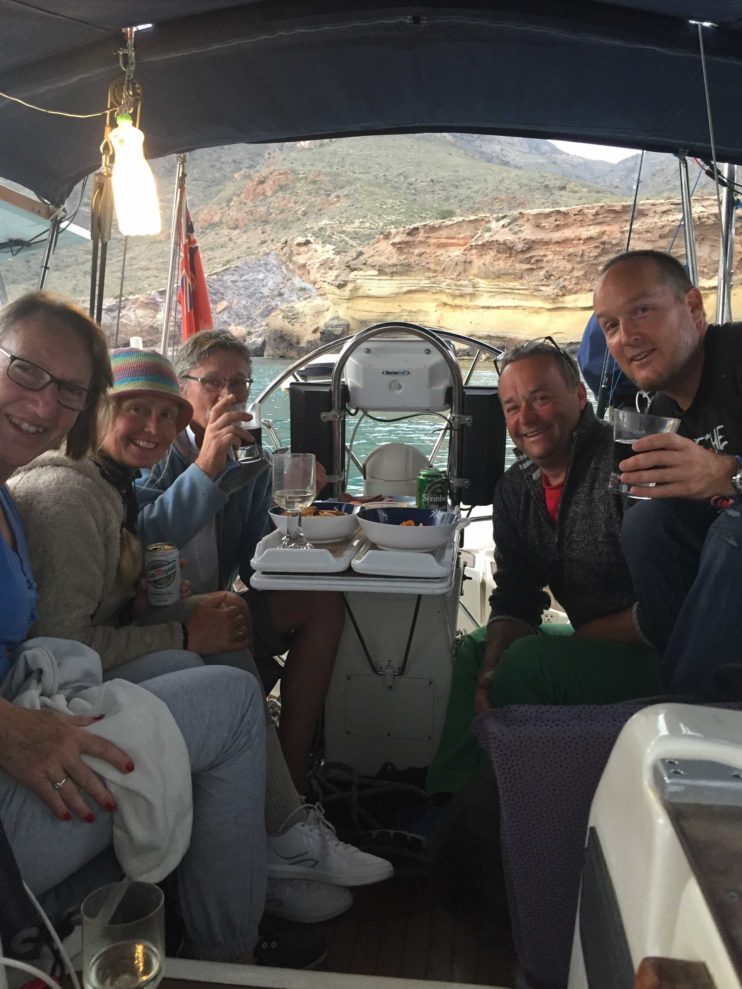 Last year we barely met any other sailors. This year – so far at least – it has been the opposite. During the winter in Gibraltar we met various fellow sailors that we’ve stayed in touch with. Because a lot of people head east from Gibraltar to the Balearics, it’s very likely you meet up with each other again somewhere along this route. Thanks to Facebook and Instagram we can keep an eye out for sailors we know in the marina’s and anchorages we’re visiting.

Via social media you can also easily meet new people. Almost all cruisers, and also in fact most other kinds of travellers, post frequently on Instagram. When you find each other in the same location at the same time, it’s like you’re meeting people you already know. 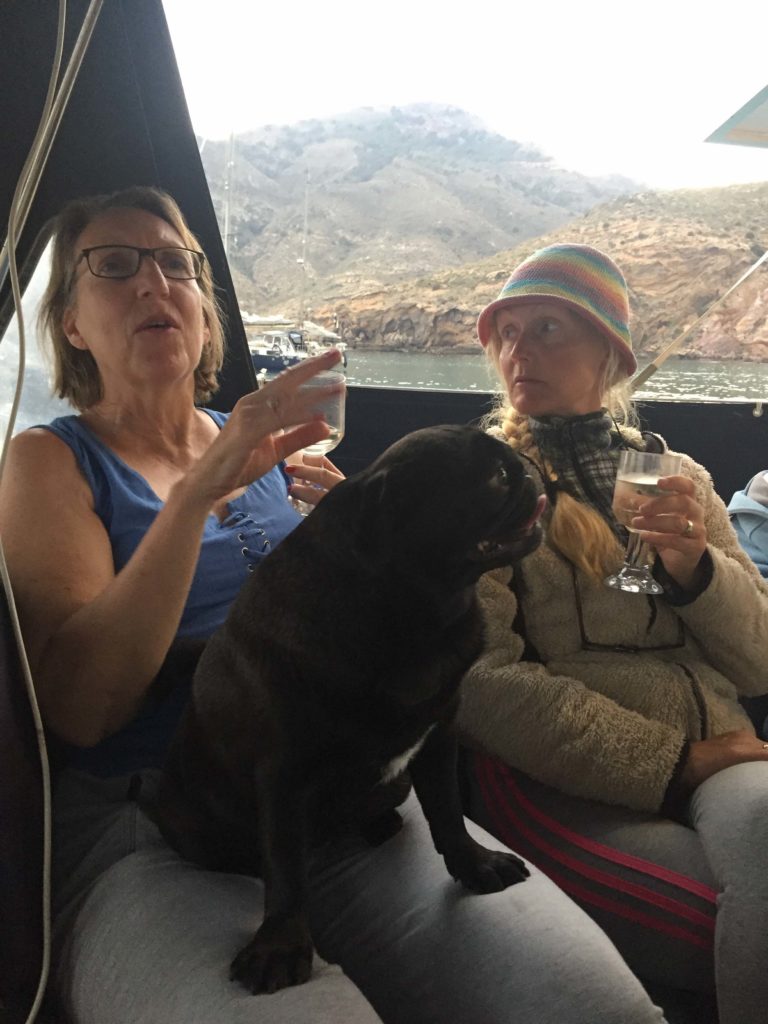 New and old friends in Cartagena

On Thursday the 10th of May we checked into Cartagena marina for 2 days. Here we met a fellow South African who I’d been following on Instagram. Marky (marky.warren) has been in Cartagena since last summer and is fixing up his uncle’s boat he acquired after his uncle passed away. It is always interesting to find out how and why other people chose the sailing life. Actually a lot of people we’ve met didn’t necessarily have a lot of sailing experience when they started. Just like us, they just chose a different lifestyle and a boat offered a way out of the rat race. Jon and Mark exchanged some good old South African-isms and we also found out that Mark had been living in Wimbledon around the same time we were there. Who knows, perhaps our paths did already cross, more than 10 years ago! 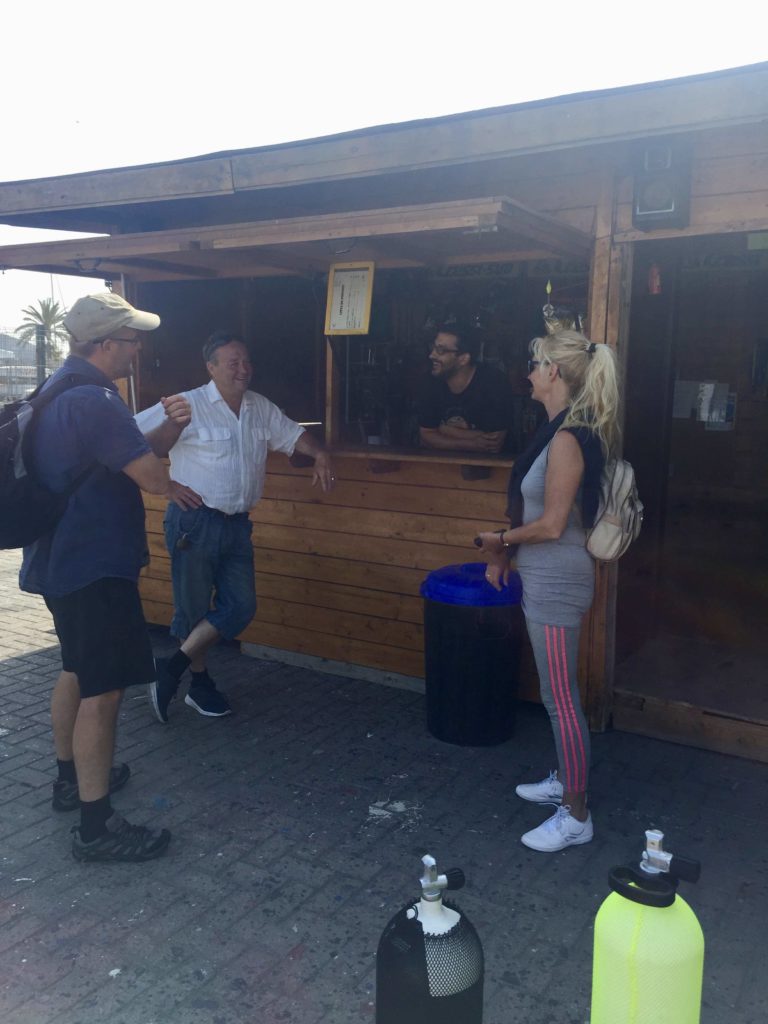 After lunch we had some errands to take care of. Together with Helena and Fredrik from s/y Wilma we found a place to fill up Jon’s and Fredrik’s diving bottles. After that the three of them went to the local chandlery while I caught up with Lea and Roland – an American couple who also spent the winter in Gibraltar. Lea and I had originally found each other via the Women Who Sail facebook group. After having shared a few meetings with fellow Women Who Sail in Gibraltar, we had also briefly seen each other in Almerimar. At that time they had just fixed some engine problems and, keen to get some renewed faith in their engine, they decided to engine all the way to Cartagena during a period with little wind. This was why they had already been in Cartagena for a few days before we arrived. They were keen to cross to Ibiza in the next few days and I was able to give them some tips on cruising in the Balearics based on last year’s experience. 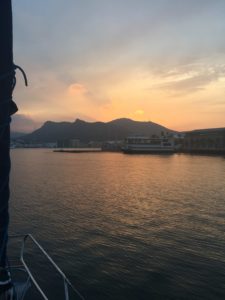 In the evening we made a trip to the Mercadona (the supermarket) and we bumped into Sten and Annika from s/y West Monsun. They were heading to Barcelona so we weren’t sure we would see them again and we said our goodbyes. A few days later, they actually would be in Mar Menor the same time as us, but not in the same anchorage so we did indeed not meet again. Who knows, perhaps in a few weeks, months or even years we have a chance to share a glass of wine again.

New and old friends at a beach barbecue

We had a brilliant sail from Cartagena to Mar Menor: a strong 20 knots behind us gave us a speeds of 6 to 7 knots. We anchored outside Mar Menor to wait for the 6pm bridge opening. Just before 6 we heard over the radio that there had been an accident on the bridge and it would not open until 8pm. We cooked some dinner and proceeded to enter the lake at 8pm while we were treated on a beautiful sunset. 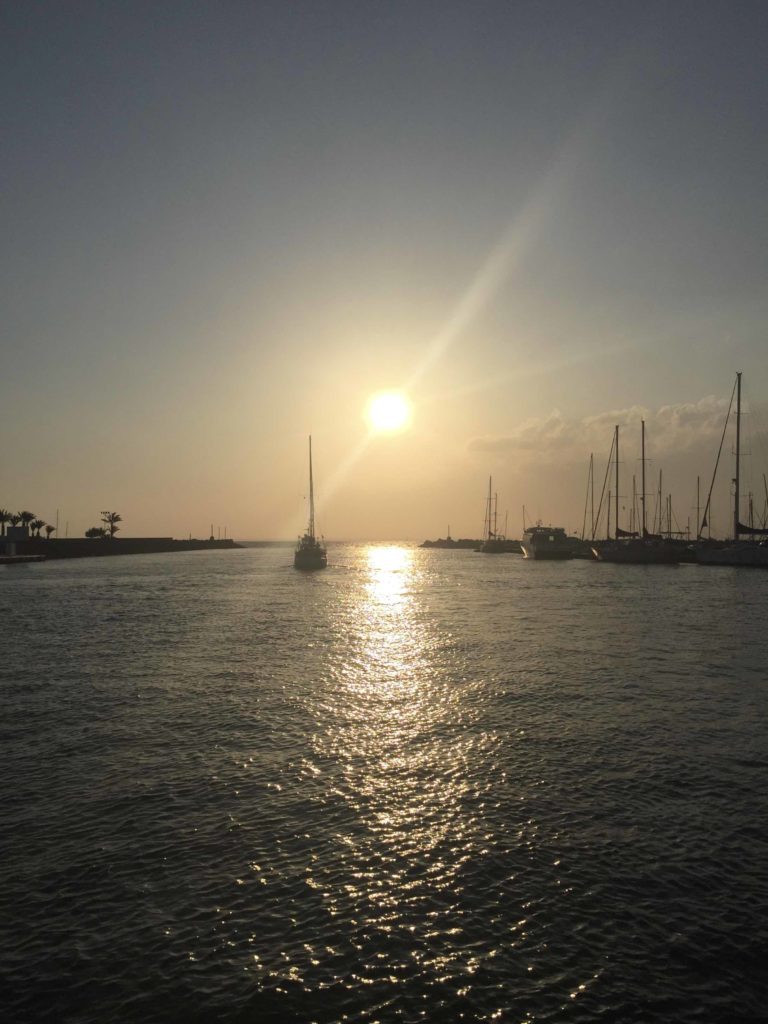 Together with s/y Wilma we joined a solitary boat in a sheltered anchorage behind one of the little islands in Mar Menor. And, surprise, surprise, Helena and Fredrik had met Susan, the other boat’s owner, months before in Portugal! The next day we all dinghied ashore for a barbecue on the beach of the island. Together with a very excited puppy we had a great meal while we got to know each other a bit better. Susan told us about her solo mission all the way down from England and the Swedes treated us to a national piece of theatre: singing and dancing to a song about a frog (“Små grodorna, små grodorna…”)

We couldn't have asked for a better backdrop 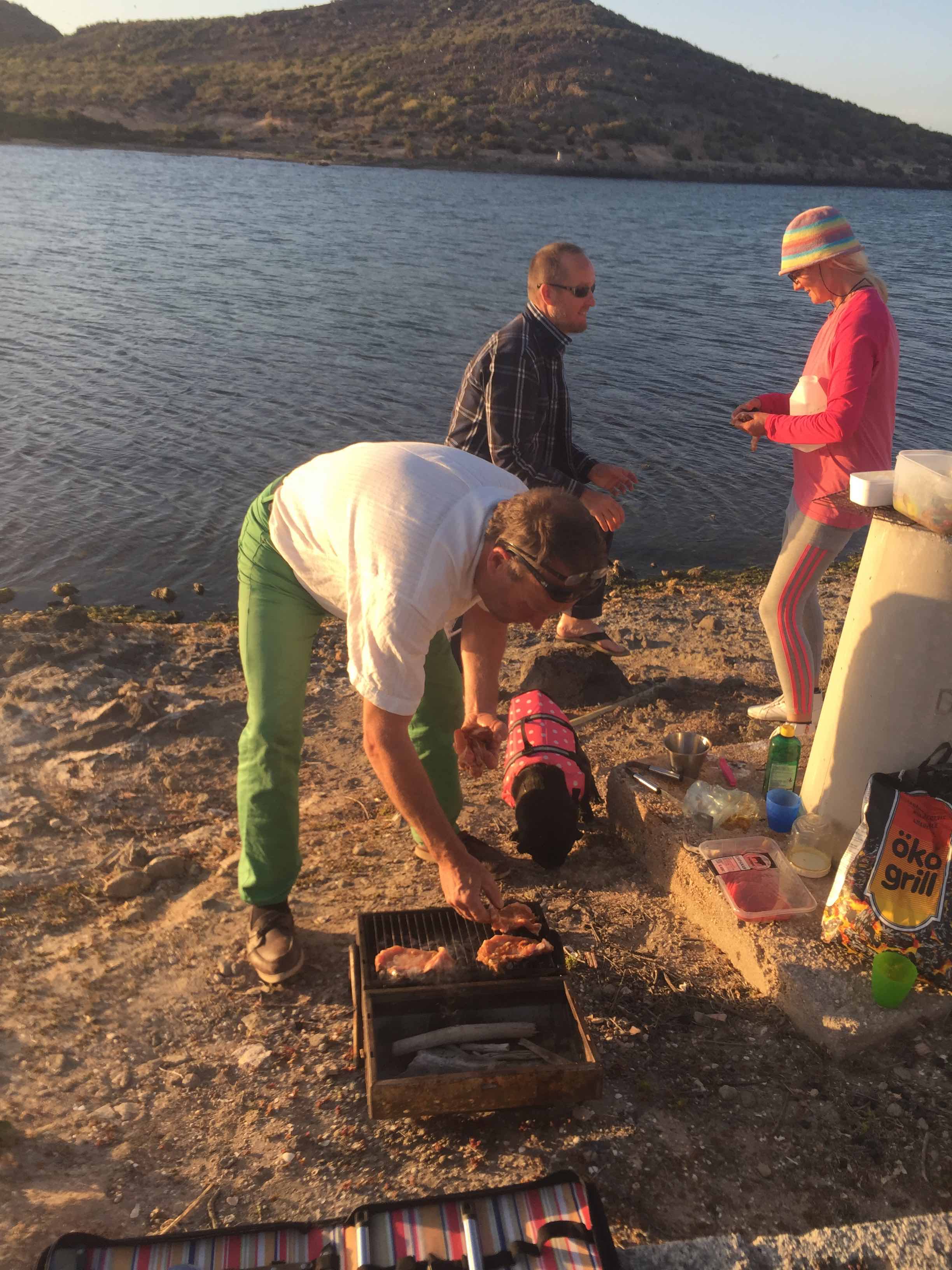 Getting the meat on! 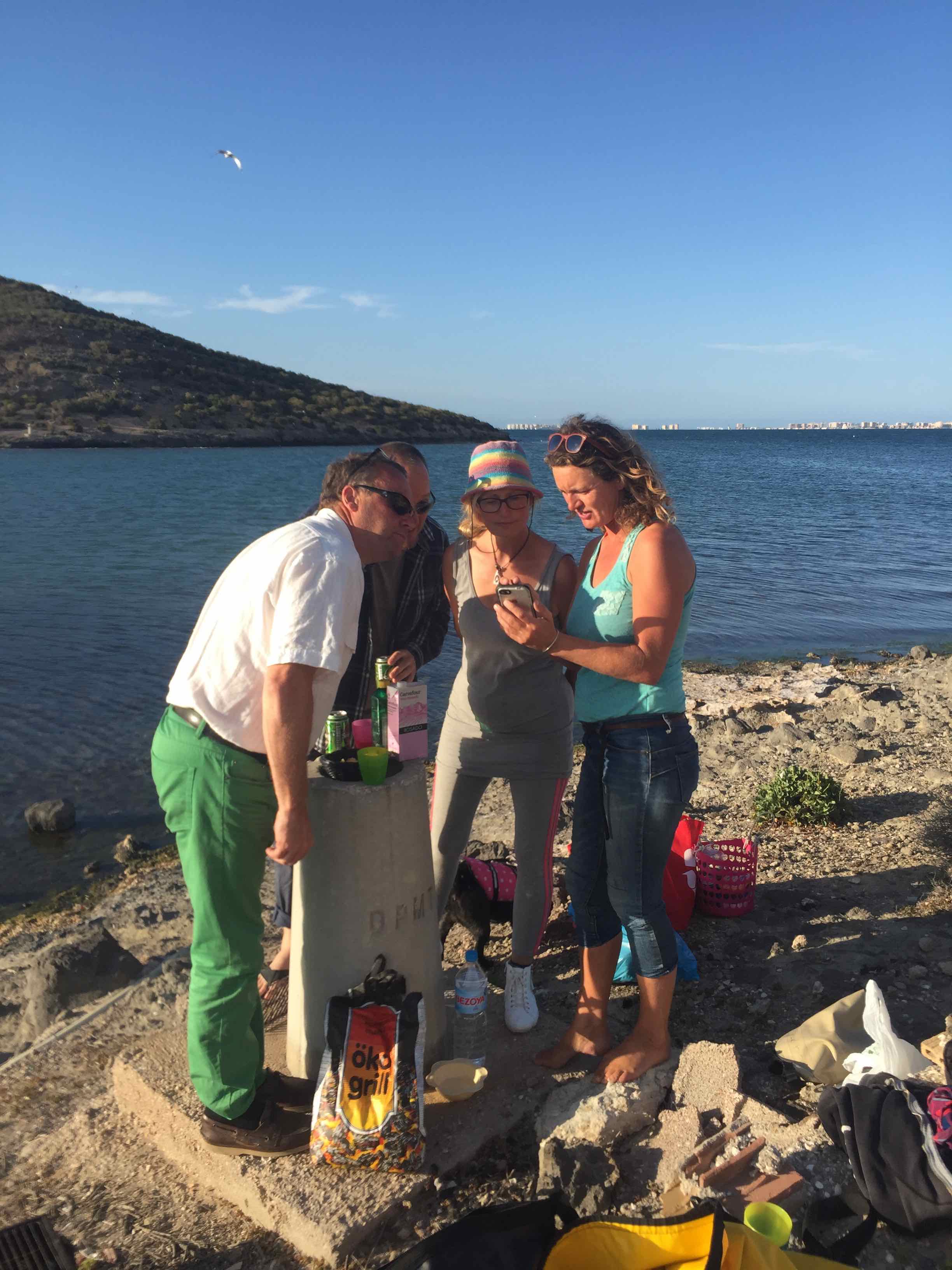 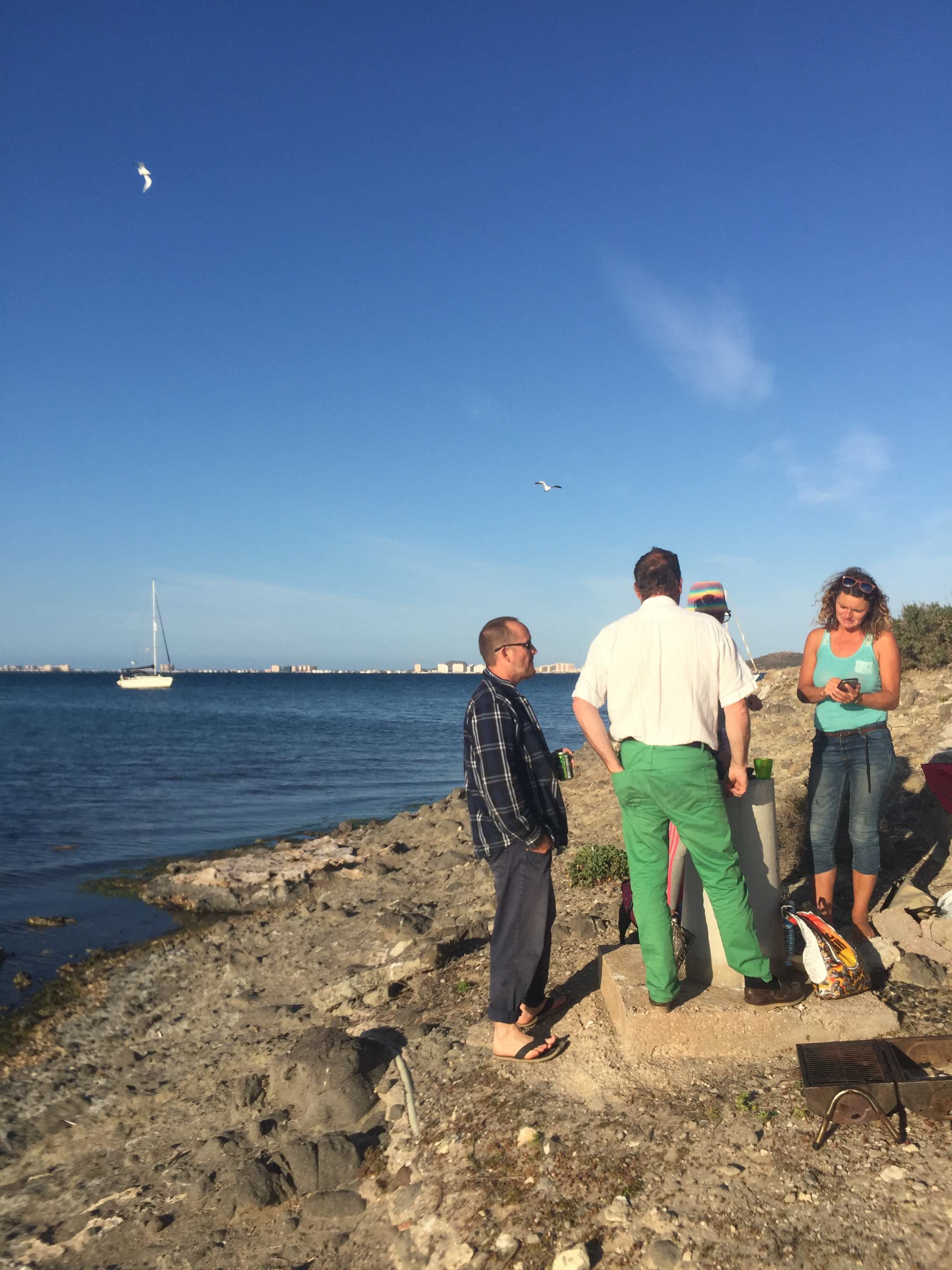 Beautiful spot for a barbecue, with Goodvibes in the background 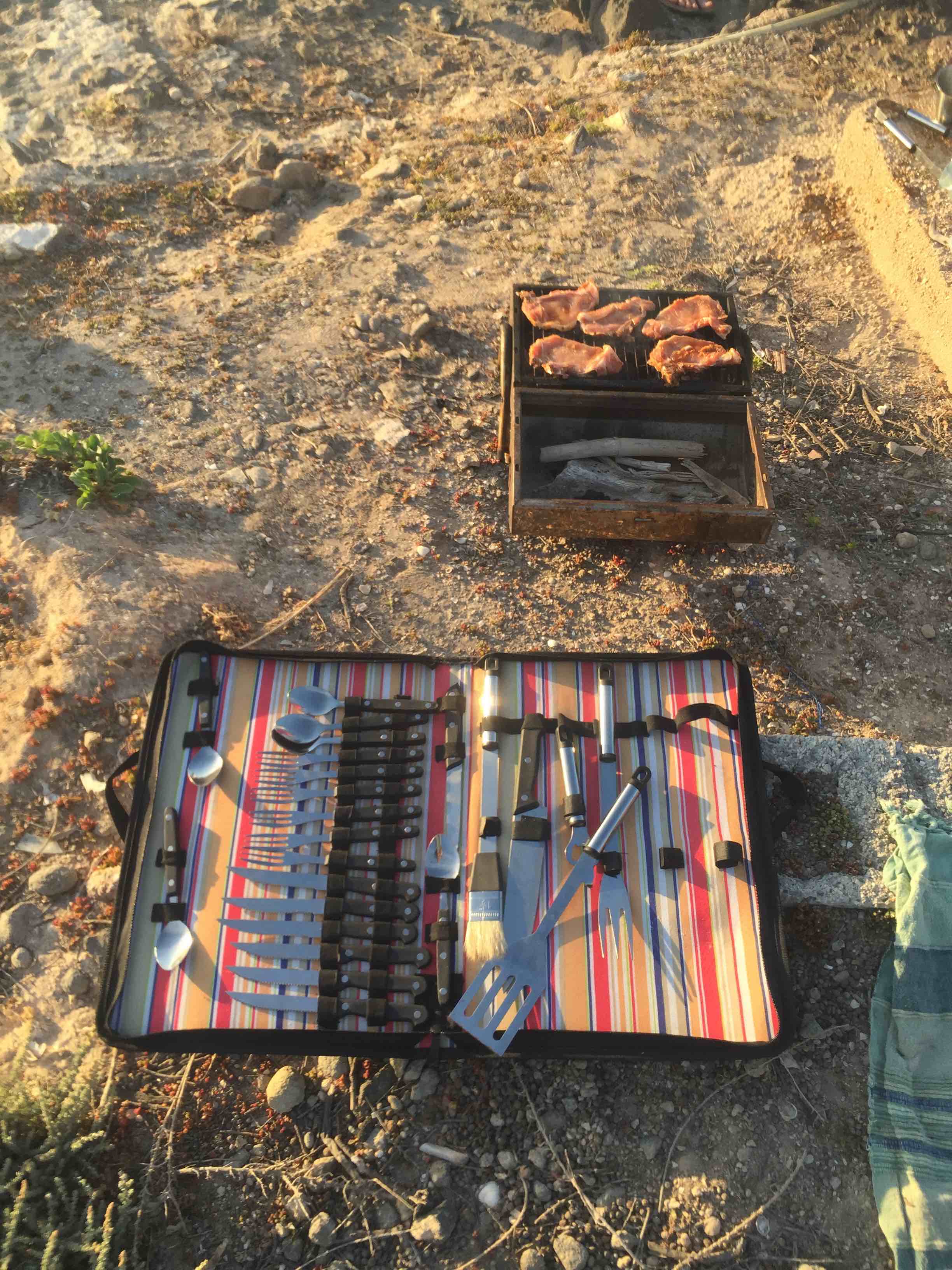 Well equipped for a braai on the beach 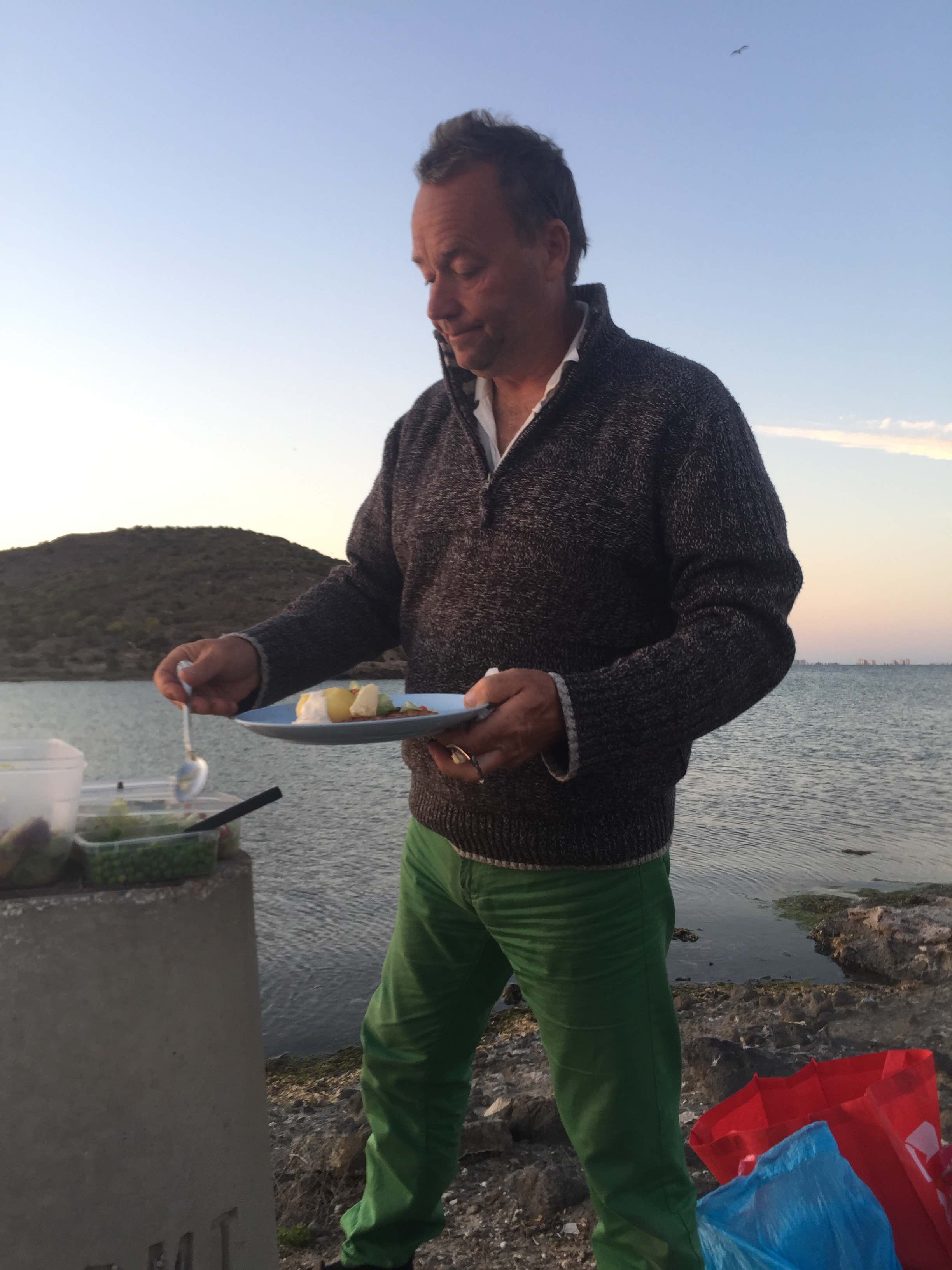 Don't forget the vegetables and salad... 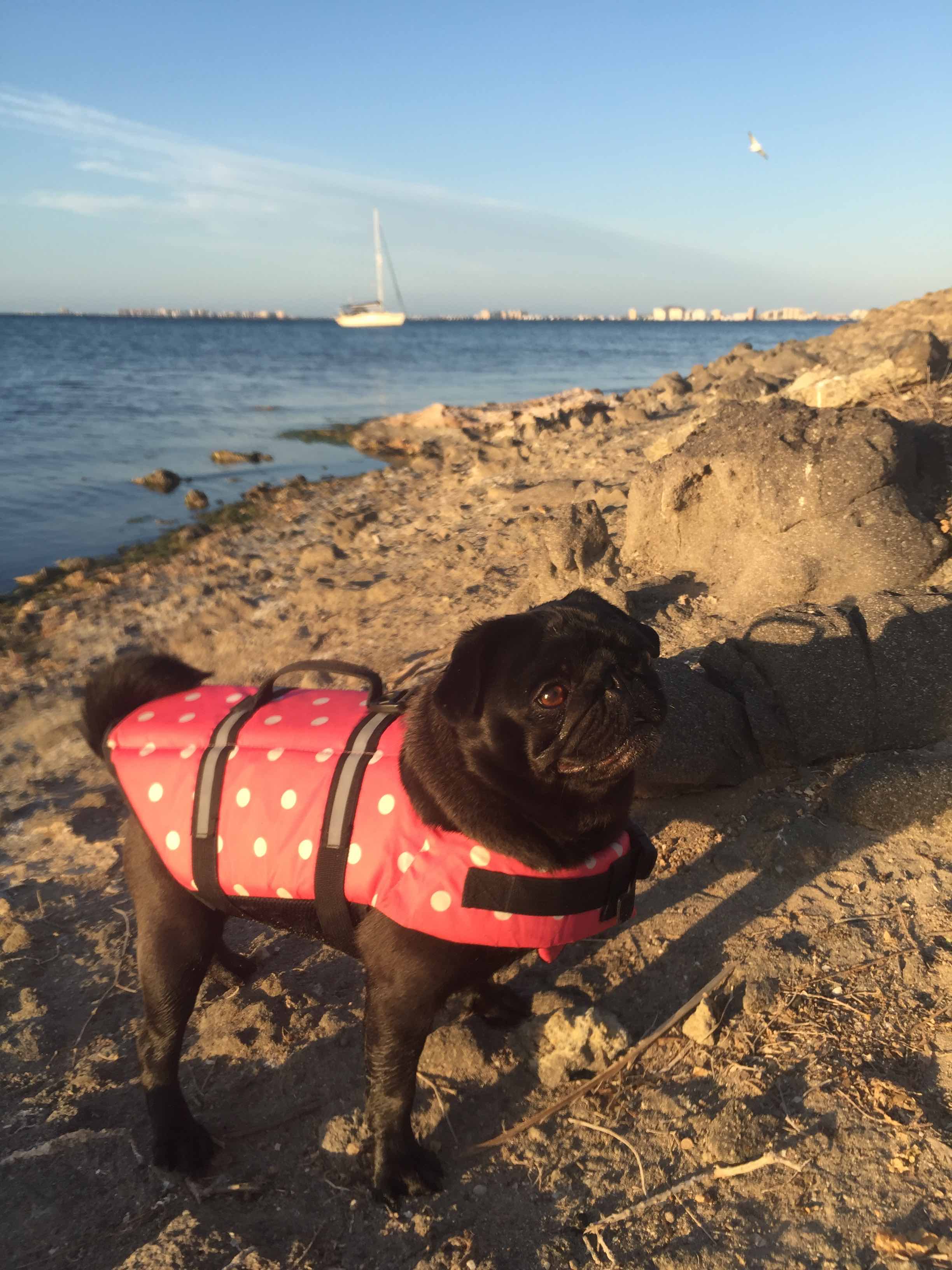 Puppy was excited to spend a few hours on terra firma

Earlier that day our fleet had also been joined by Bonduca bringing us Marcus and his friend Roger. We’ve known Marcus for more than a year now; he also wintered in Gibraltar the past two years and last year we managed to briefly catch up in Formentera. This year we had discussed leaving together but he still had to finish some jobs by the time we were leaving. When he was ready to set sail, about a week after us, disaster struck and he lost his propellor! Luckily divers were able to retrieve it and it could be refitted. He left Gibraltar on Thursday and thanks to a strong following wind and some pretty admirable persistence he managed to catch up with us in 4 days. However, he was too tired to join us at the barbecue and went straight to bed after arrival. 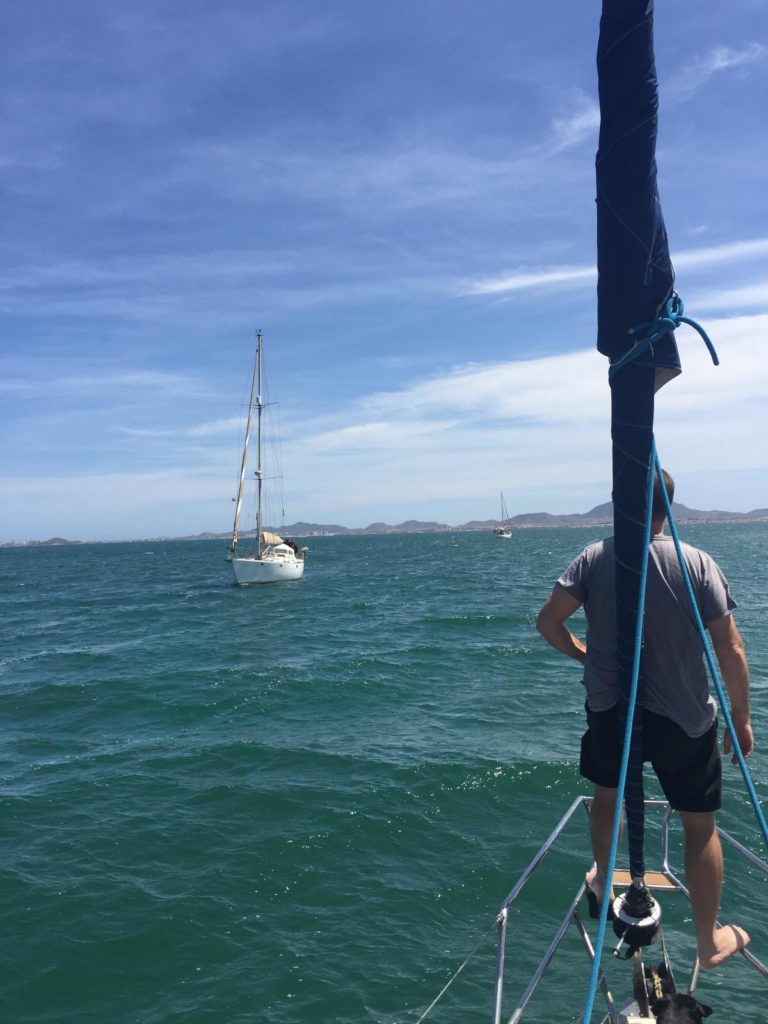 Enjoying each day as it comes

At the beach barbecue we were talking about how even when we have no schedule and are completely free to take our time, we still set deadlines for ourselves. ‘We want to be in the Balearics before the end of May’, ‘We want to reach Greece this summer’, ‘That boat is already there, while we are still here’. It’s crazy that we’re always looking ahead instead of just enjoying the present.

At the moment it looks like we won’t be able to get further north in the next few days. But instead of fretting about this, we’re just going to spend some more time in the company of our old and new friends.