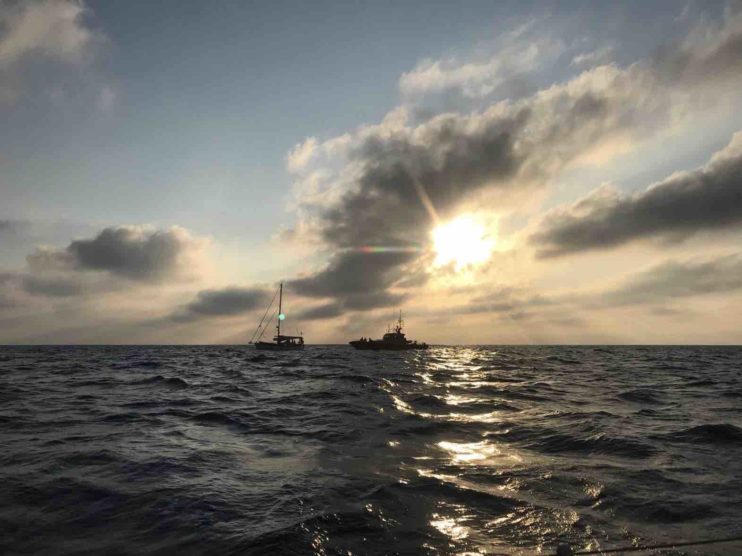 We left Mar Menor to cross to Formentera in a fleet of 5 boats. We took the 10am bridge opening and from leaving Mar Menor up until later in the evening we had a lovely sail doing about 4 knots on average. Then the wind died down and we turned on the engine because the mainsail was just flapping around. Half-way through my shift from midnight to 3am the wind crept up to 7, 8 and then 9 knots so I decided to turn off the engine and pulled out the jib. When I went to bed at 3am we were sailing along nicely at 5 knots. The moon had just disappeared below the horizon and it was now pitch black outside.

By this time De Witte Raaf had already disappeared in the distance as it sails very quick even in light winds. Goodvibes was keeping time with Bonduca; we were followed by s/y Wilma a few miles behind us because, hard-core sailors as they are, they had not turned on the engine when the wind had eased off. Last in line was Susan, on her own, in her 26 feet boat with a tiller system and a defunct autohelm. Wilma was keeping in touch with her every 2 hours to make sure she was ok. In fact, all of us had been keeping regular radio contact through the day and, to a lesser degree, during the night.

4.40 am. So it was not so strange to receive a call over the VHF for Goodvibes from Wilma at this hour. Jon picked up the call as I heard their message lying in bed:

Panpan Panpan Panpan. We are being approached by a rib with approximately 10 people on it. We believe they may be refugees.

Wilma requested us to relay the message to the coast guard as they had not yet received an acknowledgement of the Panpan. I got out of bed and put on my clothes while Jon repeated their Panpan over the radio.

4.45 am. Just minutes later we heard another call from Wilma:

My heart skipped a beat because my first thought was that one of our friends had somehow gotten in the water while dealing with the other people. Pretty soon it became clear that 2 of the people from the dinghy (it turned out to be a dinghy rather than a rib) had fallen in the water. Luckily they were quite soon after retrieved by the others on the dinghy.

Jon had been able to get in touch with the Spanish coast guard (who thankfully spoke very good English) and they had advised Wilma to keep a safe distance and to throw life-vests and other emergency gear overboard to the people, if needed. Wilma was now circling around the dinghy to keep them in sight. 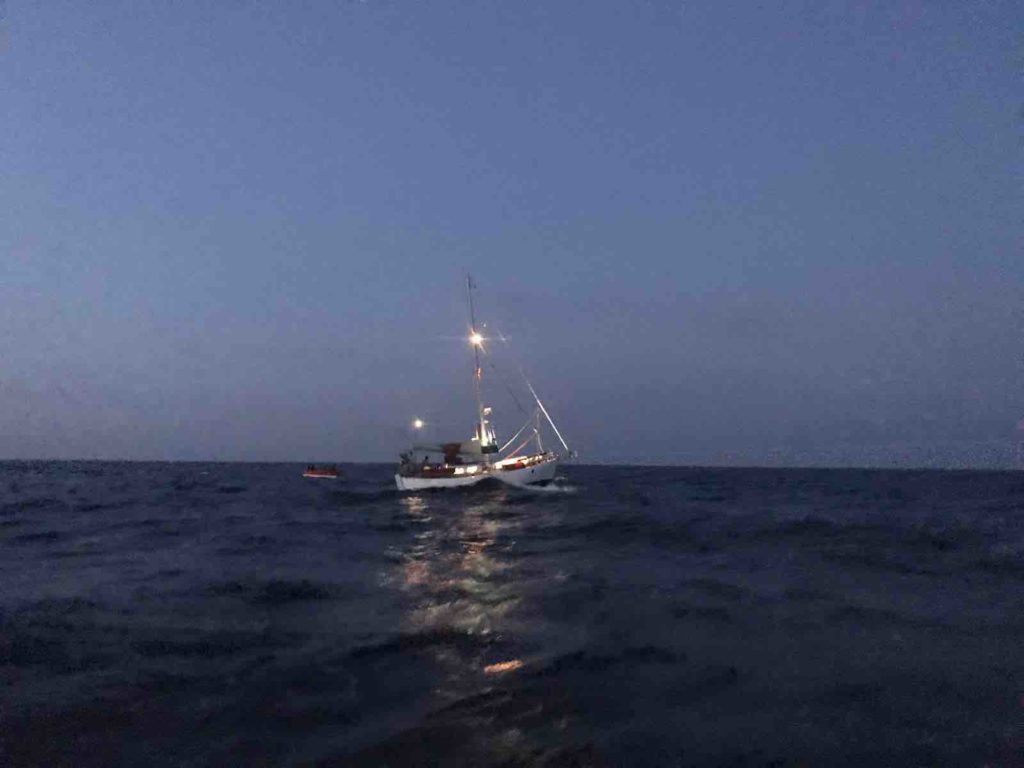 Wilma and the dinghy with 11 people on board. (Photo taken by Susan)

Our first instinct was to turn on the engine and to turn around to see if we could help. However after bashing into the weather for a bit we realised it would take us about 2 hours to get there. So instead we decided to turn back onto our Formentera course again and double-reefed to slow down. Feeling a bit helpless, we focused on maintaining radio contact and monitoring the situation.

The coastguard was very quick in responding and would, in any case, have beaten us to Wilma with ease. A helicopter was dispatched from Palma – ETA  30 minutes – and a rescue boat had departed from Alicante – ETA 2 hours.

The next hour there was more communication between Wilma, the coast guard and the rescue helicopter over the VHF. Helena and Fredrik had established that the people had departed from Algeria; the engine of their dinghy was no longer working; in total there were 11 people and one person was on board Wilma.

5.40 am. The helicopter arrived overhead of Wilma. Because there were no immediate medical emergencies they decided not to attempt a dangerous airlift from the dinghy. Instead the helicopter continued to circle above Wilma to assist if necessary until the rescue boat arrived.

6.40 am. The helicopter was running out of fuel so it returned to base. The rescue boat was expected in 20 minutes.

7.40 am. Over the VHF we heard confirmation that the rescue boat had taken 11 people on board and was now heading to the mainland. Wilma could continue to Formentera.

Needless to say, we didn’t get much sleep in the next few hours. We were relieved everybody was safe and the rescue services had been extremely efficient and fast. In total the rescue operation had lasted around 3 hours. Because we had been moving away from Wilma we no longer had radio contact with them. We just hoped they were not too shaken by the whole experience. 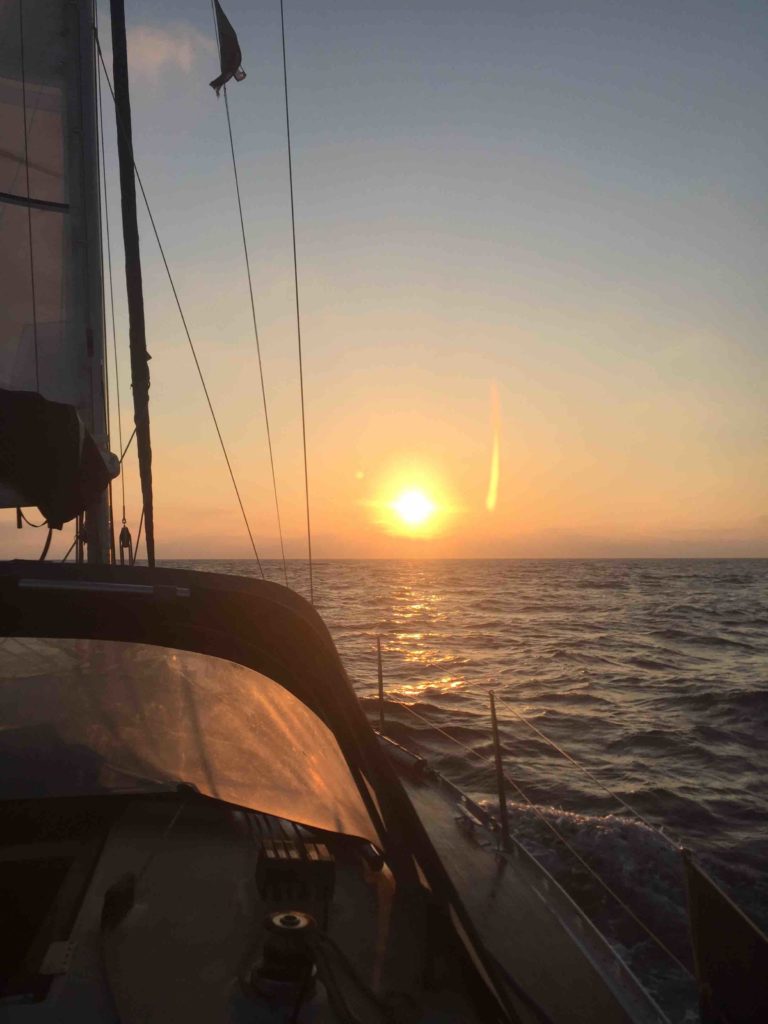 Sunrise over Formentera after. A beautiful sight after an eventful night.

Around 3pm we arrived in Formentera. We both had a much needed nap and some food. We kept the VHF and AIS on so we could hear or see Wilma and Susan approaching. We very glad to see them arrive in Formentera around 6pm. After some messages back and forth we were reassured that everybody was ok and all that was needed at that time was a stiff drink and a long, well-deserved sleep.

You can read about s/y Wilma’s impressions of this eventful night in their blog post:

and watch this short video they made:

6 Comments on “Receiving a Mayday: immigrants at sea”