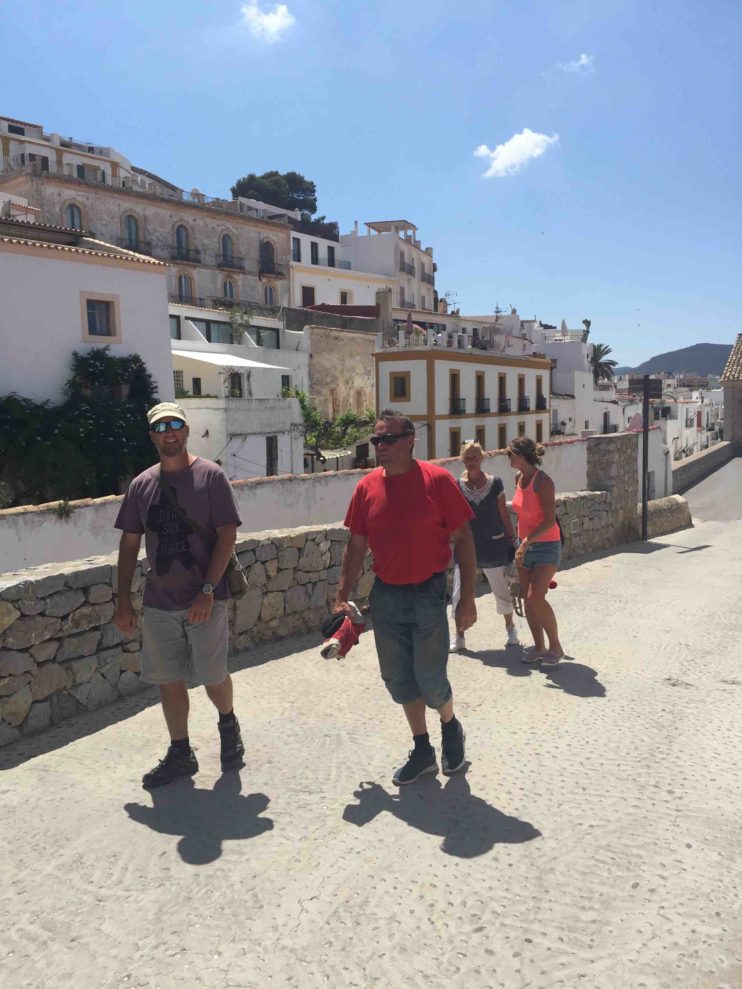 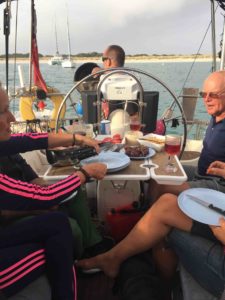 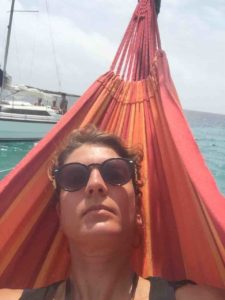 The few days we spent in Formentera passed by quickly with barbecues on Goodvibes, trips ashore with the Puppy and generally relaxing and hanging out with our friends. The water was as gorgeous as we remembered from last year, but the weather was a little bit disappointing. While Northern Europe was getting 30 degrees and had the warmest May on record, Spain was having one of the worst springs in decades. Most days were cloudy and it was barely warm enough to wear t-shirts. If the sun did appear, the fairly gusty wind would still keep the temperature down. I spent some hours in our hammock rigged up between the forestay and the mast, but due to the wind I was swinging so much that I had to hold on to the lifelines to break the speed. 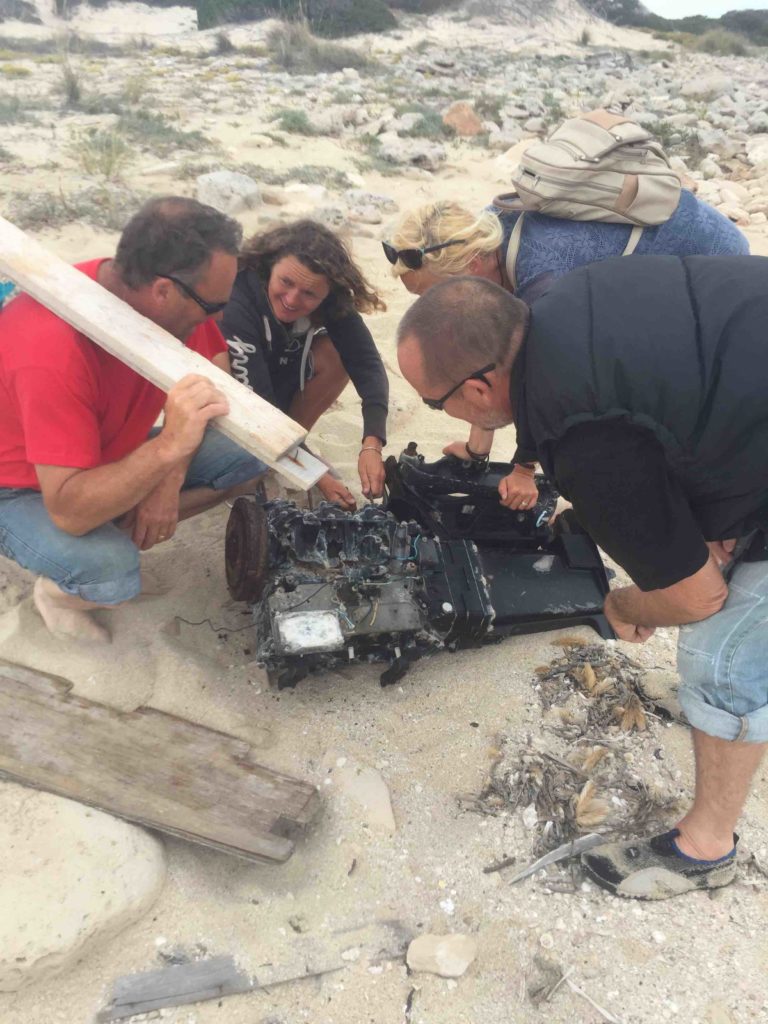 Espalmador, our anchorage in the northern tip of Formentera, attracts a lot of day tourists from Ibiza. They arrive at 10 or 11 in the morning on expensive motorboats and commercial catamarans. This gives it, especially at weekends, a real Ibiza party vibe. As cool as that may sound, after a few days we had enough of the blaring music and yelling teenagers and we decided to move on. A friend of Susan’s was scheduled to arrive on Ibiza in a few days and we wanted to be somewhere on Ibiza where we could rent a car to pick her up from the airport. 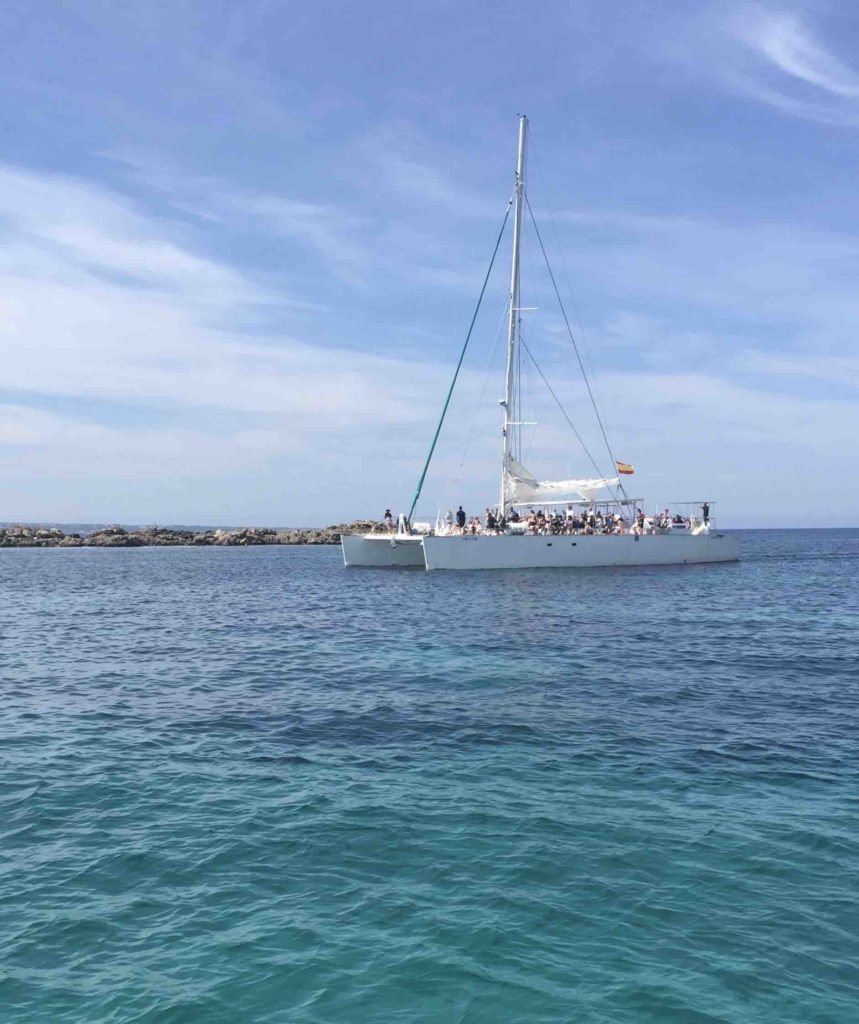 We left just before lunchtime for a 30 mile journey to Portinatx on the north-east of Ibiza. The first hour was spent dodging fast ferries and other sailboats and motorboats. Between Ibiza and Formentera there is a small passage of roughly 2 kilometers – marked by a north and south cardinal – where most traffic between the two islands has to cross. In other words, you have to keep your eyes on the ball. 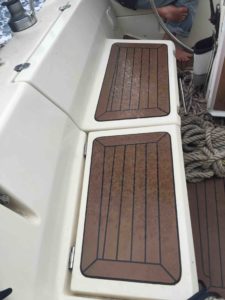 The first proper rain in weeks

We had a very decent 10 knots on the beam and we were making good speed. Just before passing a little island called Tagomago, Jon suggested to put in a reef because it can often get unexpectedly gusty around those types of headlines. And did we need that reef! As soon as we headed on our course north-west, the wind picked up with gusts of up to 22 knots apparent wind. We were clocking 7, close to 8 knots! It never felt bad because both the wind and the swell were mostly in our direction, but it was a little bit tiring and combined with the increasingly worsening weather (we had to put on our sailing jackets even though it was the middle of the afternoon – usually the warmest time of the day -, put on our socks and shoes because it was getting so cold, and even got some drops of rain) it didn’t exactly make for a pleasant passage.

Summer in the med?

Our friends on Wilma and De Witte Raaf arrived at the Portinatx anchorage just ahead of us. It looked very crowded and after consultation with Wilma we decided to go to the bay just beyond Portinatx. This turned out to be a much better location: the large bay was mostly empty and there was plenty of space to anchor. We had to keep a close eye on the depth because it did quite rapidly get shallower and we also had to make sure to anchor in the sand and not in the weed. The wind was still fairly strong but fortunately the swell reduced significantly closer to the shore.

De Witte Raaf, who had initially managed to find a spot in Portinatx, joined us too and about an hour later Susan arrived. She had problems rolling in her jib and part of it was still out. While she threw down her anchor (she has to do this by hand from the bow) the wind caught this sliver of sail and she was rapidly being blown onto Wilma. Their anchors got entangled and her hull had to be fended off so she would not bump into Wilma. Jon quickly changed into his swimwear so he could dive down on the anchors if necessary, but luckily Fredrik managed to get on board Susan’s boat and hauled up her anchor. He was also able to manually roll in the jib completely and shortly after they safely anchored Susan’s boat. We have our share of challenges but at least we’re always with the two of us. When you are on your own a lot of jobs are much harder to do. I certainly have a lot of respect for all solo sailors out there. 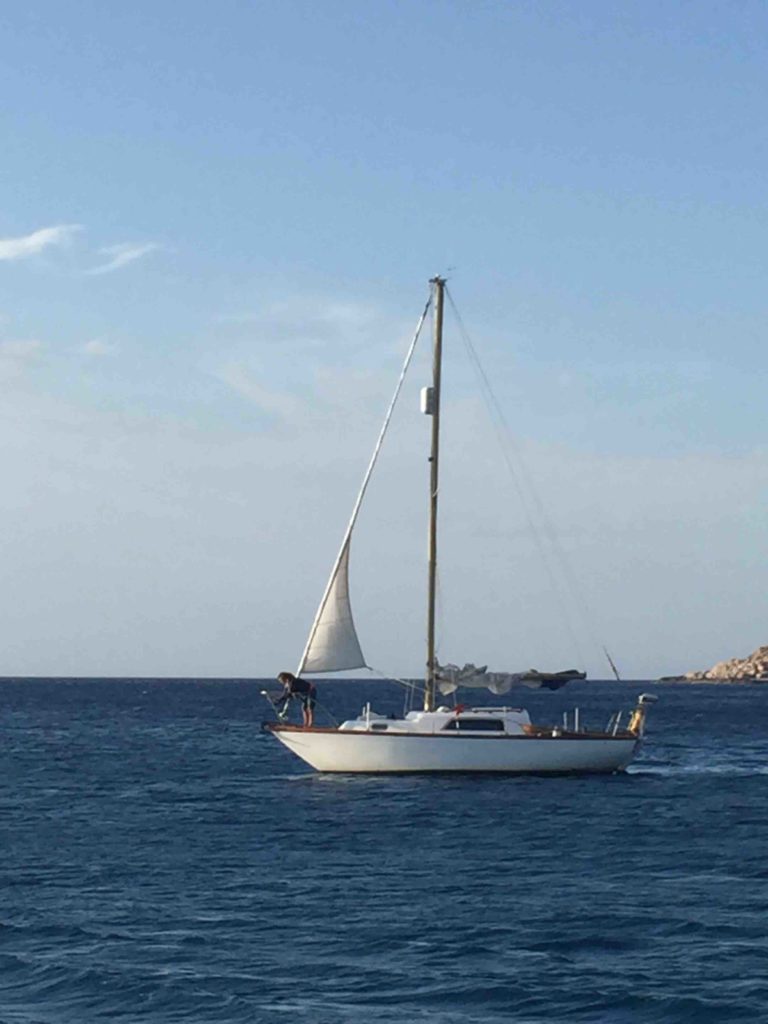 Solo sailing – not for the fainthearted

On the day we had rented the car, at around 10 am Fredrik took Jon and me ashore. It was a short walk of around 20 minutes to get to the car rental place in Portinatx. The town itself looked quite pleasant: a lot of tasteful holiday apartments and wooden walkways across the beach. We drove back to a little beach close to our anchorage where the others (Helena, Fredrik ,Susan) joined us – together with all our rubbish of the past week and a half or so. First stop: the bins. 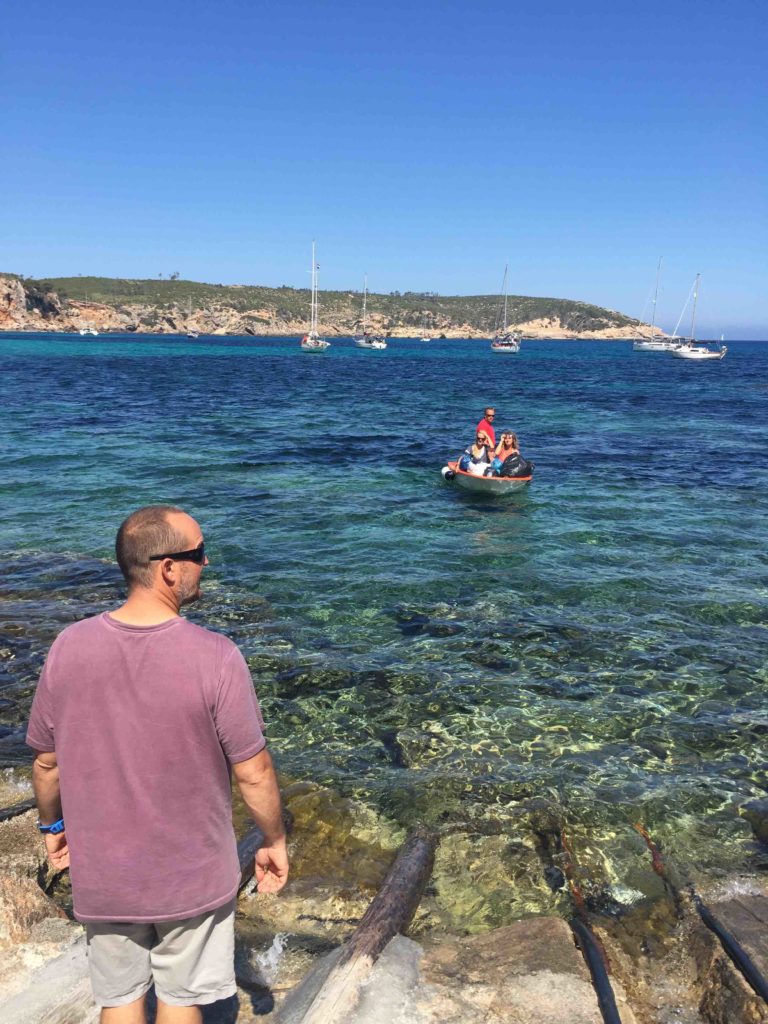 Then we set off to Ibiza town. We stopped at a chandlery where everybody bought a few necessary items. No large purchases were made as it was quite expensive (this is Ibiza!). I found out there was a Decathlon (a large shop with sports equipment) nearby and about an hour later I was the owner of a new wetsuit. Up until now I had been using an old wetsuit from Jon’s brother but as he is over 2 meters tall, it didn’t exactly fit me nicely. With the new suit I will be able to snorkel for much longer in the still chilly waters of the Balearics.

We parked the car near the marina and went in search for lunch in Ibiza town. We were all pleasantly surprised at how clean and pretty the town looked. There is definitely more to the island than clubbing and extravagant beach parties. After lunch we made a short walk up to the old town but we could not stay long because we still had to fulfil one of our most important missions of the day: to get water. The boot of the car was full of jerrycans and water bottles, as we were all keen to top up our watertanks. The last time we got water was in Mar Menor – 10 days before. Our water tank holds 140 liters and we were pretty sure we still had enough left for a few days but it’s one of the supplies you just don’t want to be running low on. 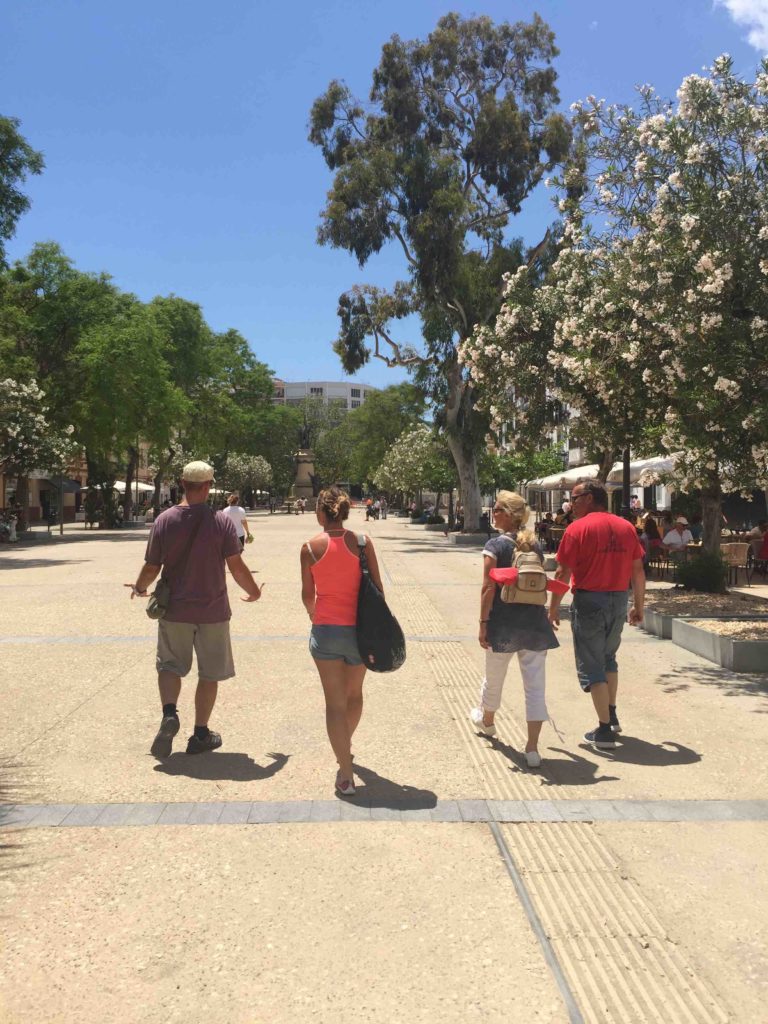 Look at us, walking on solid ground!

We stopped at a petrol station but at the air/water station there was a sign that the water was not suitable for drinking. We were a little bit at a loss what to do next because presumably, as Ibiza has to purify its drinking water and it’s therefore not available in abundance, we would not be able to find drinking water at any other petrol stations either. At first we thought that maybe we could kindly ask at a restaurant or cafe, but we didn’t spot many suitable places that were open. So we decided to head towards San Antoni where we knew they supplied water at the marina. On our way there, we saw an industrial water distribution point with trucks and large waterbottles. Hopefully they wouldn’t mind selling us some water?

I went to into the office and in my best Spanish explained that this was perhaps an unusual request but that we lived on a boat and needed to top up our water. Could we perhaps use the hose and fill up our jerrycans, for some payment of course? The woman I had spoken to said that there was a machine to buy water just around the corner. I was not really sure what she meant or where exactly it was, but she wasn’t overly friendly and didn’t elaborate any further so I got back in the car and slowly we drove into the indicated direction.

You cannot imagine our surprise when, just around the corner, there were indeed several basins with water taps. For a euro you got 20 liters of water. Halleluja! We didn’t even know these places existed, but it was exactly what we needed and we happened to stumble upon it! Almost giddy with excitement we filled all our cans and bottles and returned to our little beach. 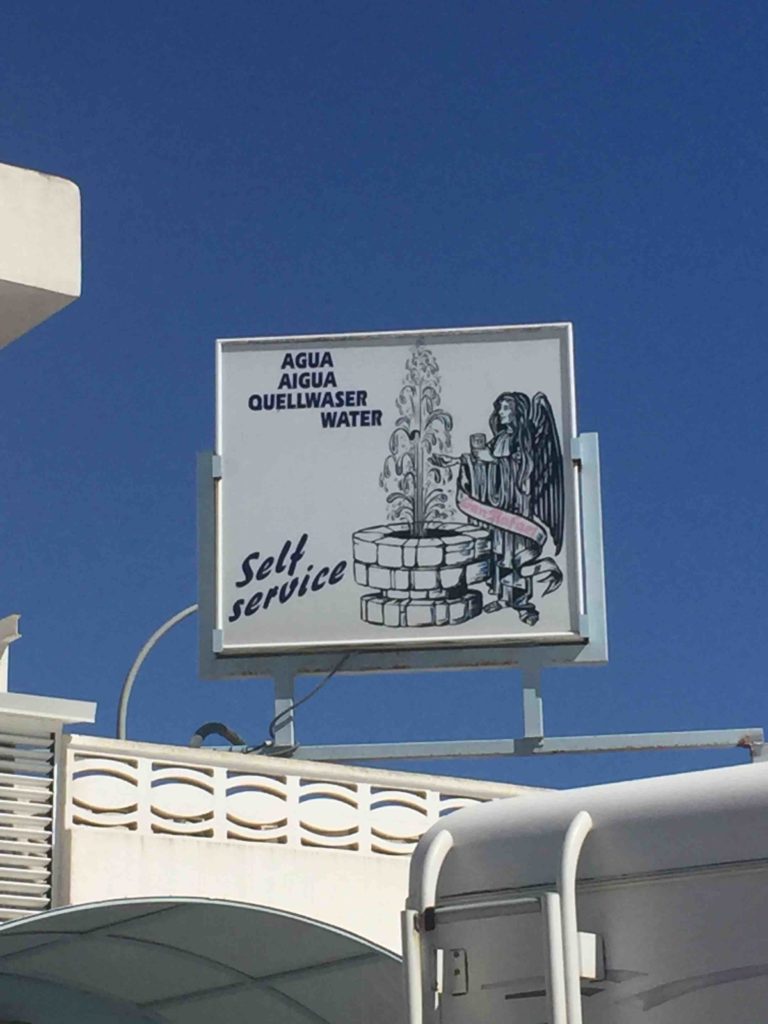 A water fountain sent from heaven

We managed to collect over 100 liters of water

Mercadona to the rescue

We weren’t done for the day yet, though. Everybody had almost run out of fresh meat and vegetables and having the car was a perfect opportunity to do some shopping. So we unloaded all the waterbottles, put them next to the dinghy on shore, kept our fingers crossed nobody would take them, and went off in search for a Mercadona.

It was a good 30 minutes drive to the supermarket and we spent a good hour or so filling up our carts. Not all of the shopping fitted in the boot so the 3 ‘children’ on the backseat had to carry some bags on their laps. By now it was past 8 o’clock and we were all pretty tired and hungry. We could not yet relax though, because we had to dinghy all the water and shopping to our respective boats and store it away. When we finally did sit down in our floating houses, we were very pleased that we had managed to achieve everything we wanted, especially thanks to the miracle of the water fountain! 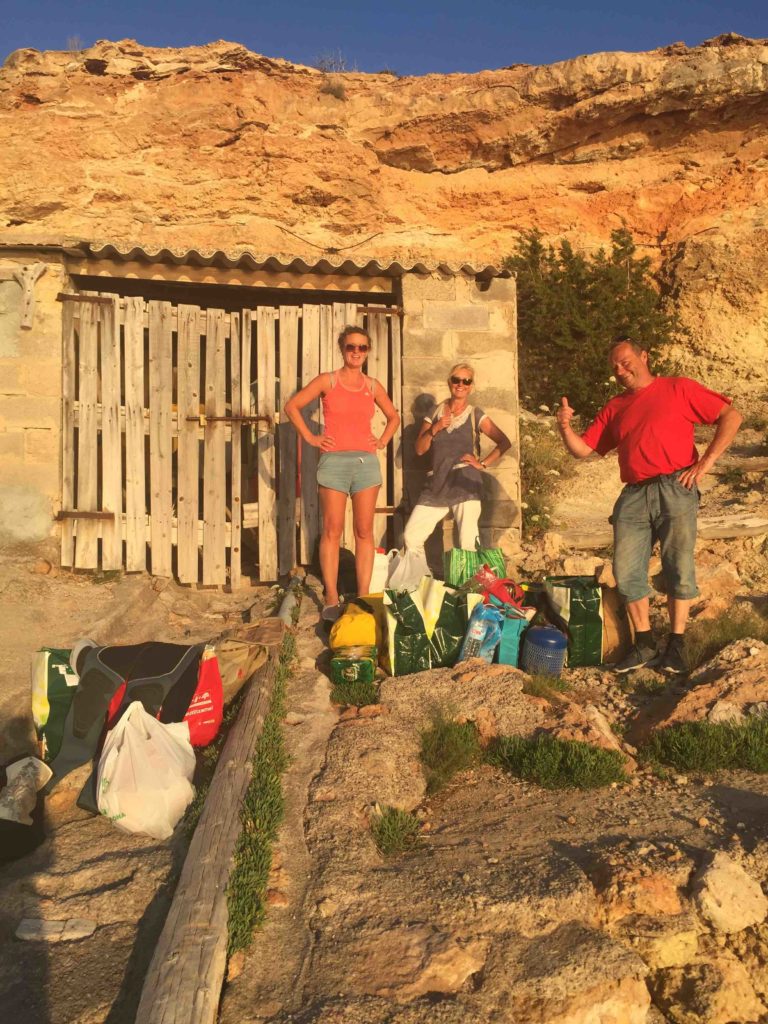 A long but successful day

And finally: a late trip to the airport

The main reason for hiring the car was to pick up Susan’s friend Cat from Ibiza airport. She was scheduled to arrive at 11.30 at night but early in the evening she messaged to say her flight was 1.5 hours delayed. In a way we didn’t mind so much, because it meant we had enough time to cook and eat some dinner before heading off again.

Around midnight we left Goodvibes in our dinghy to pick up Susan and to go ashore. The airport was only about 30 minutes away (the other side of the island…) so we didn’t have to rush. Cat arrived around 1.15 and it was probably 2.30 or so by the time we were back on our respective boats. Strangely enough we were not really tired so we ended the day with a glass of wine and some not-too-taxing tv (i.e Family Guy :-). 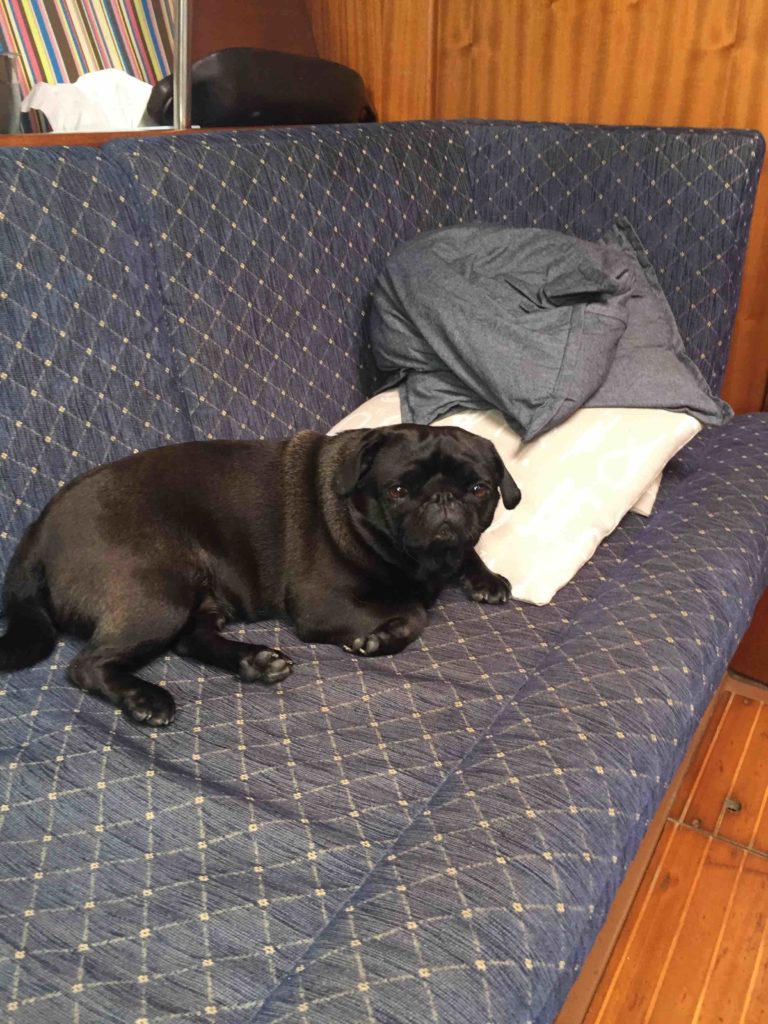 Puppy was happy (well, was she?) to see us again after we left her alone for a whole day…

The next morning Jon and Fredrik got up around 9 to go on another water mission. We were so excited about the easy water access that we wanted to make the most of it while having the car. They then dropped of the car in Portinatx and, after a sneaky eggs and bacon breakfast, headed back on foot.

In total we spent €138 on the car rental, including petrol. Although we are all sailors on a budget and trying to spend as little as possible, it was totally worth getting the car for a day. We were able to do shopping for at least a week, get water – without having to check into a marina -, saved on alternative airport transport and we got to see a little bit of the picturesque towns and inland of Ibiza. 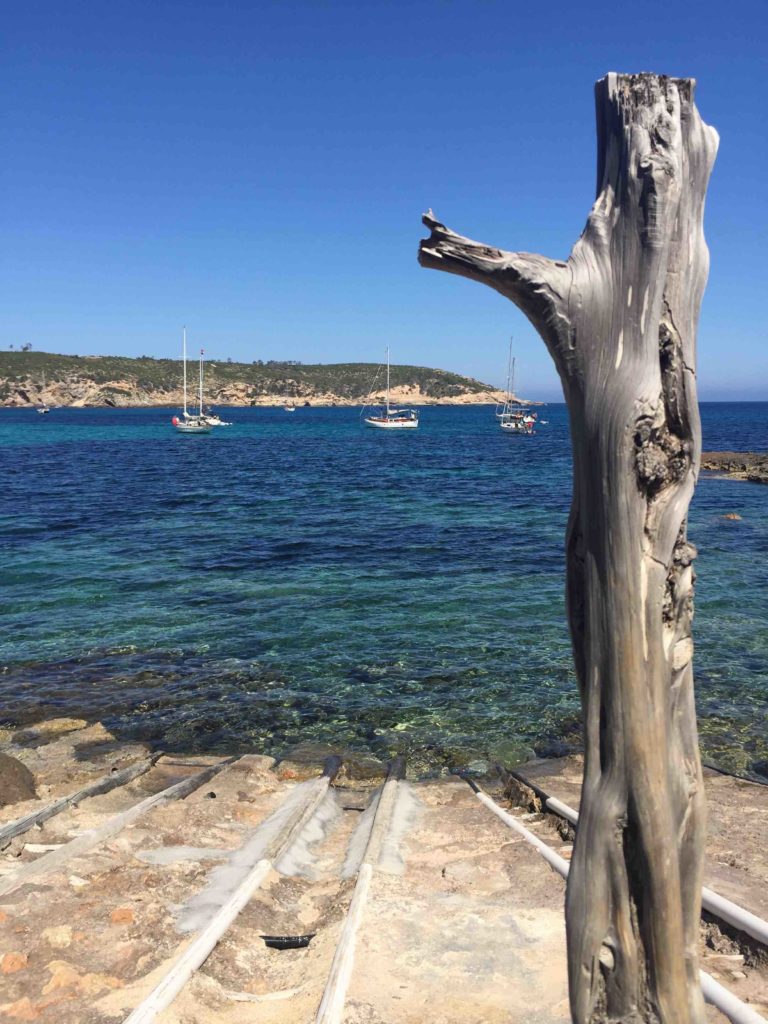 2 Comments on “Exploring Ibiza by sailboat and by foot”