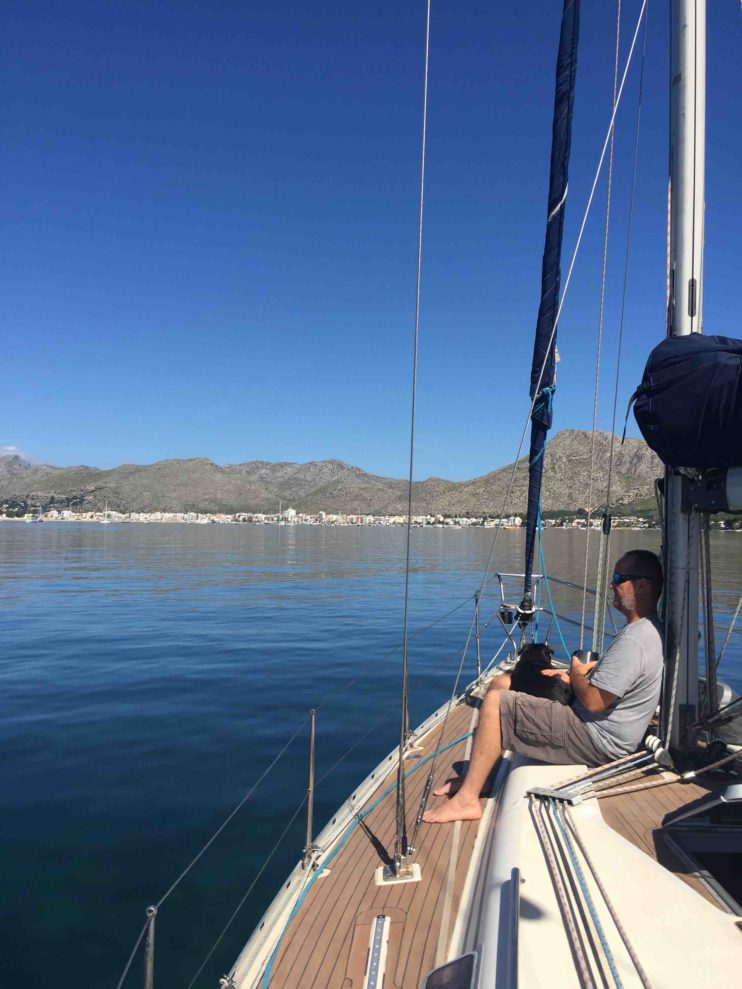 We really liked Cala Tuent. It was only a few minutes with the dinghy to go ashore and there were bins just at the top of the concrete pier we used as the dinghy dock, which meant it was very easy to get rid of our rubbish. People came to the beach during the day but it never got really busy and because the anchorage was not very large, there were no visits from large motorboats. 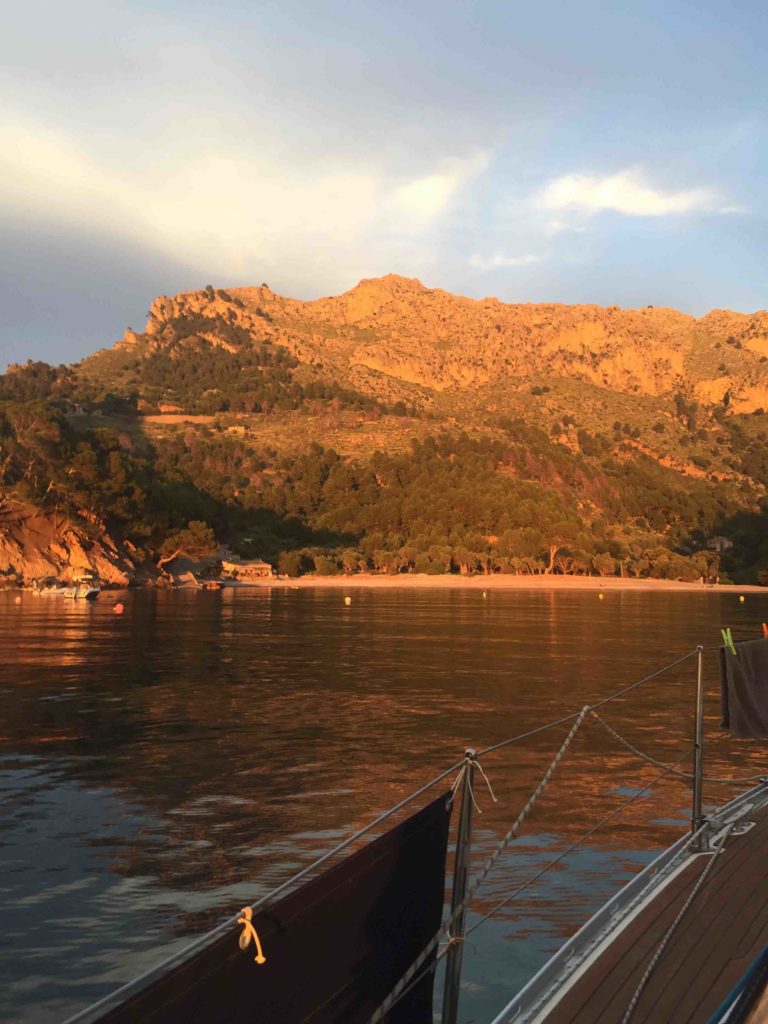 Cala Tuent by sunset. This night it was very peaceful.

On the second night in this cala, after a lovely meal at Wilma, we prepared to head back to Goodvibes around 10 pm. The wind had suddenly picked up though and during the very short dinghy ride back we got splashed on quite a bit. I went straight to bed, but woke up a few hours later wondering why Jon’s side of the bed was empty. It turned out the wind had increased even more and because it was not consistently coming from the same direction we were swinging all over the place. Jon had stayed up in the cockpit with a cup of hot chocolate to make sure we didn’t drag or bump into one of the other few boats in the anchorage.

There didn’t appear to be any direct danger and around 2am he also went back to bed. The noise of the wind and the constant worry of swinging around the anchorage kept both of us awake for most of the rest of the night. Around 6am we both had a look outside. It was surprisingly warm (a lot warmer outside than inside) and the sun was just about to come up. The sailboat next to us was quite close to us and, more worryingly, also pretty close to the rocky shore – just at a few meters distance. For a moment Jon considered blowing the foghorn to wake up the people from the neighbouring boat, but they did not appear to be getting much closer to the rocks. I decided to stay outside so Jon could get some sleep. If anything would happen I could wake him up.

It was not unpleasant to spend a few hours in the warm air, with the sky getting lighter and lighter. However, the constant worry about us getting closer to the other boat (or not?) and perhaps having to wake the neighbours urgently to let them know they were going on to the rocks meant that I could not really relax and enjoy it. After some time Fredrik appeared on deck of Wilma. They had also been very, very close to the boat behind them in the middle of the night and he wanted to make sure everything was still ok. Finally, I also saw a person appear on the boat we had been keeping an eye on next to us. I waved; I got a wave back and with relief I saw that the man took place in his cockpit. Now it was up to him to decide if he wanted to move or not.

After about an hour he was joined by a woman and they decided to haul up anchor. By now the wind had eased off and we could catch up on our sleep in peace. Later we caught up with Wilma, who had also been completely surprised by the gusty weather. They had had a quick chat with a visiting boat the next morning which had just come from Soller. It had been quite a chaotic night there: boats dragging and others having to re-anchor in the middle of the night. We were quite relieved we did not stay there. 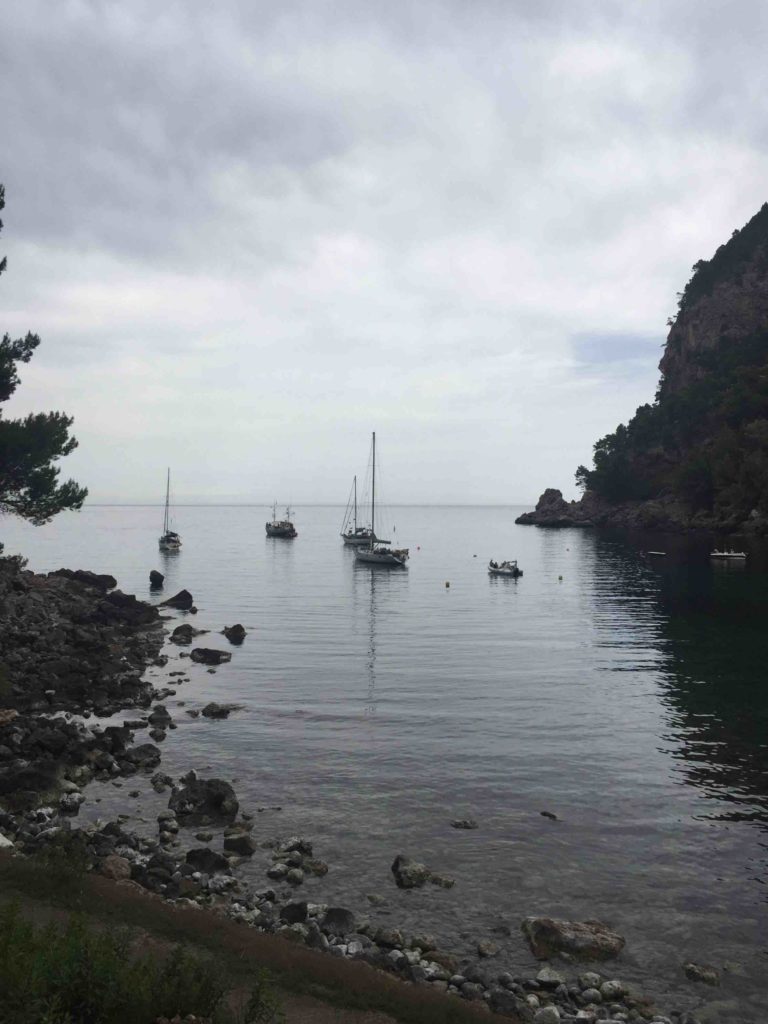 Cala Tuent is quite narrow and has rocky shores

For the next few days there was a strong north/north-west wind forecast so we decided to set sail to the bay of Pollensa. This bay faces the east and contains several anchorages which together provide shelter from swell and wind from almost all directions.

As soon as we came out of Cala Tuent at 9.30 am there was a nice 10 knot wind behind us. We spent half an hour setting up the spinnaker pole to be able to pole out the jib. Once that was in place, we set the jib sail to starboard and the main sail to port so we could goosewing with the wind right behind us. 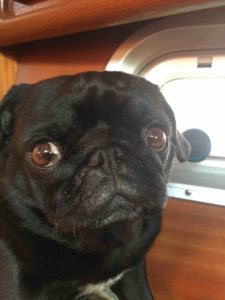 Puppy keeping an eye on everything from belowdecks.

On our previous sail we had noticed that the jammer for the main halyard didn’t always work 100%. Its purpose is to lock the line (the halyard) that keeps the main sail up  so the sail won’t fall down. But while hoisting the sail I noticed it wasn’t locking and the line was slipping back out. Captain Jon quickly tied the line on to a nearby cleat so at least the halyard – and the main sail – would stay safely in place. He investigated the jammer and after spraying some WD40 in it, it was doing its job again.

We had a great sail doing over 6 knots to Cape Formentor. There we decided to go carefully because we had to do a turn of almost 360 degrees which meant we would be almost facing the wind (now between 15 and 20 knots). We could have sailed very close hauled but with that amount of wind it meant the boat would have heeled over a lot. In fact, we were watching Wilma and some other sailboats behind us and they were indeed heeling a fair amount. So to keep the ride comfortable we decided to stick on the engine and spill most of the wind over the main. It was only 5 miles or so to the anchorage so it would not take long. 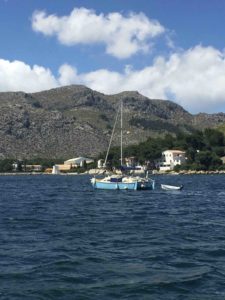 When we arrived we immediately spotted our friends Elena and Ryan on Kittiwake. We had been in touch with them the day before and we were all very excited to find out that they were so close to us and we would be catching up on them. We had met them once before in Gibraltar, a few days before we left, and before that we had seen them on their you tube channel and social media. If you haven’t heard of them, it’s worth checking them out: they are a young (to us!) couple who sail on a budget, proving that this life is achievable for anybody who sets their mind to it.

The anchorage was very nice: a very large space with not many boats and a depth of around 4 to 5 meters. We wouldn’t have to worry about dragging into other boats here! Across the anchorage lies the port of Pollensa, a small town with a dinghy dock and a supermarket. 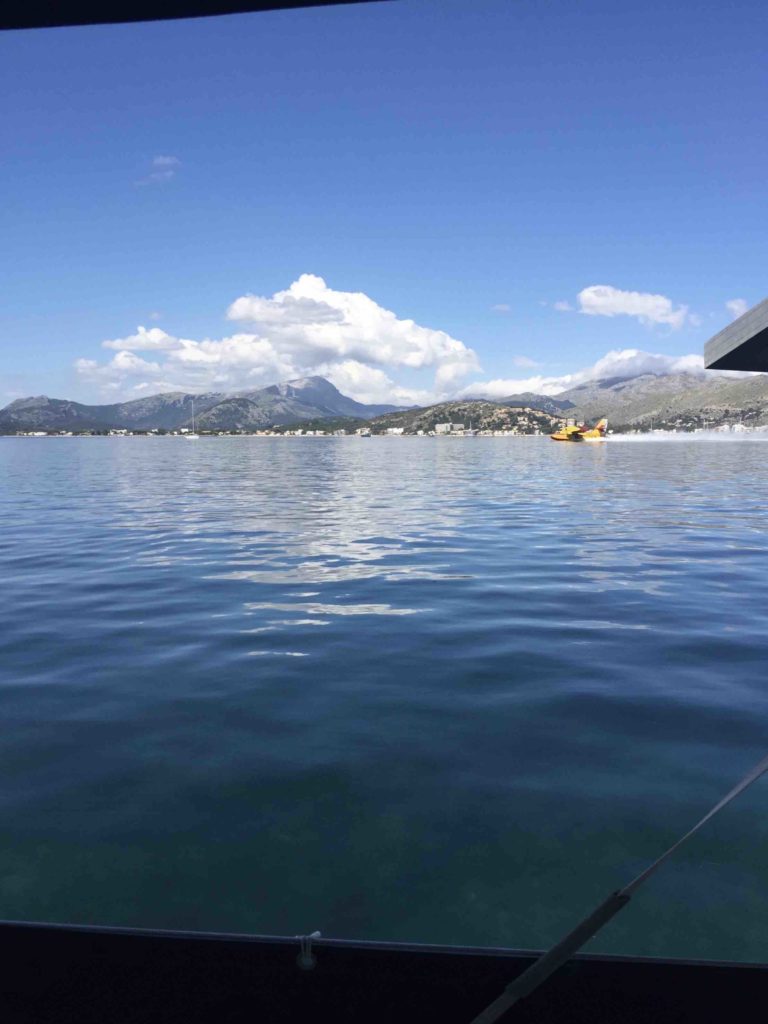 Pollensa bay is a practice area for seaplanes used for extinguishing forrest fires. Quite unusual to see them land and take off right next to the boat.

The next few days we got to know this little town reasonably well. There was an Eroski, very useful for shopping, and there were bins a short walk into the backstreets. It was not so easy to find water though. We went on various missions: the marina did not provide water, the petrol station normally didn’t, but we managed to get a few liters for a small ‘bribe’. Eventually we resided to buying local spring water in bottles from the supermarket. €0.47 for 5 liters is hardly a big expense. 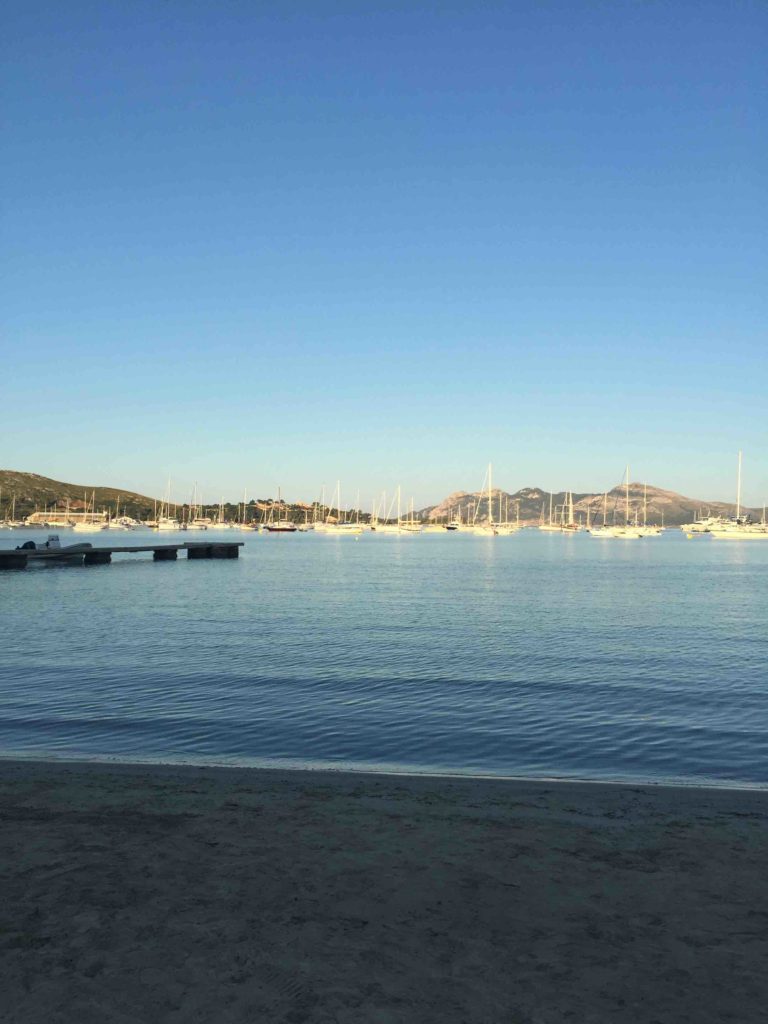 The bay of Pollensa contains a large number of boats on mooring balls, and in addition a fair amount of boats at anchor. It may not look like it here, but as there is a lot of space you don’t have to worry about being too close to your neighbour. 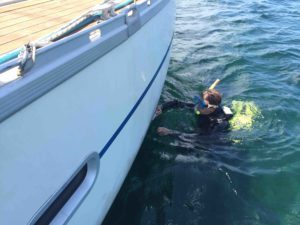 Scrubbing the growth off the hull

We stayed in Pollensa for 10 nights. What do we do all day when we’re not sailing? Well, we like to take it easy in the mornings. No alarm to wake us up, so we can sleep as late as we want. Which is not crazy late: usually we wake up between 8am and 9am. After a leisurely breakfast there is some cleaning up to do. Usually the dishes are left from the night before, I do a quick vacuum of the saloon, or there is some laundry to wash.

If we take the dinghy to go into town, that can easily take a few hours. First we have to find our way around. Then we usually pop in at a supermarket, we may have a coffee somewhere, walk around a bit etc. Back at the boat there are always jobs to do: preparing a new fishing line, servicing the outboard engine, cleaning the deck. In between we may go for a swim or a snorkel or catch up with our friends. 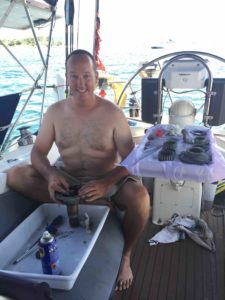 Every day we check the weather forecast so we know what weather to expect and also to plan the next few days. If we intend to go to a new place we read up on the anchorage/marina/facilities etc.

In the evening we take our time for cooking dinner. Jon has gotten very good at cooking a perfect pizza, with a homemade base, and we often grill our meat on the barbeque. A lot of the times we have to improvise what to make based on what ingredients we have or that need to be eaten, which means we’re rapidly expanding our cooking repertoire! After dinner we often watch tv. We have a few harddrives with our favourite series and a large collection of movies so there is always something to watch.

It is not so easy to establish a daily routine because sleep is often interrupted by weather, swell or unfamiliar noises so we frequently have to catch up on sleep during the day. When we are sailing the activities are very different again. But that’s part of why we chose to do this: to have a more unconventional and exciting lifestyle. It certainly beats sitting in an office 5 days a week. 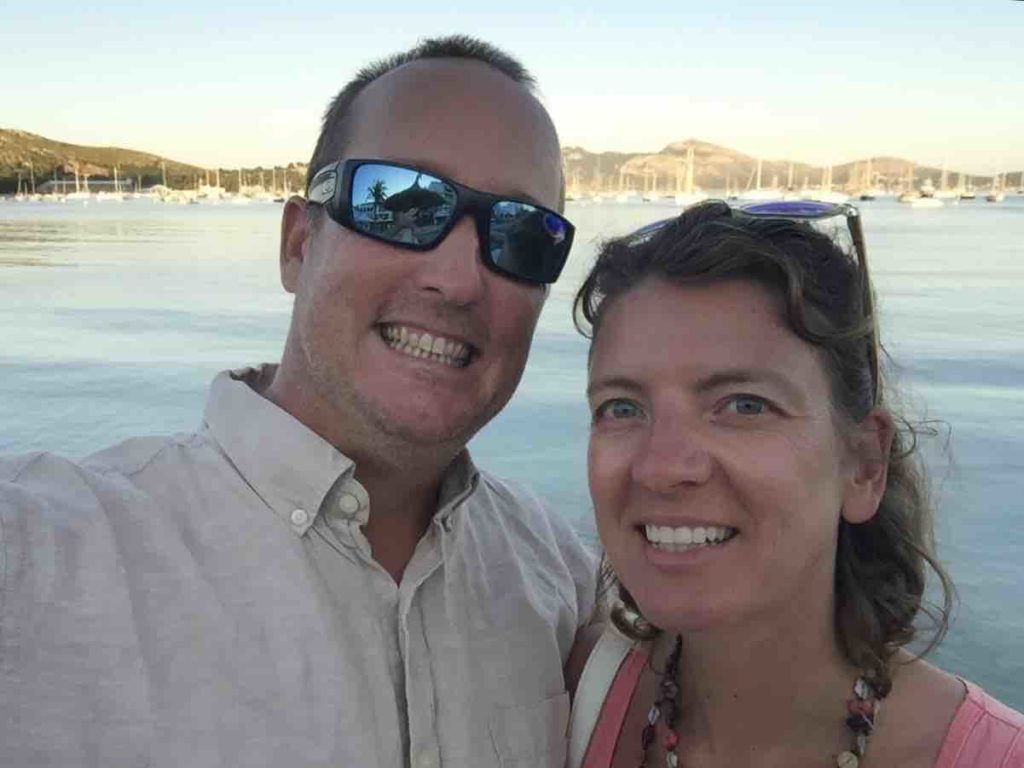 Exciting to be on the sea, excited to get on land.