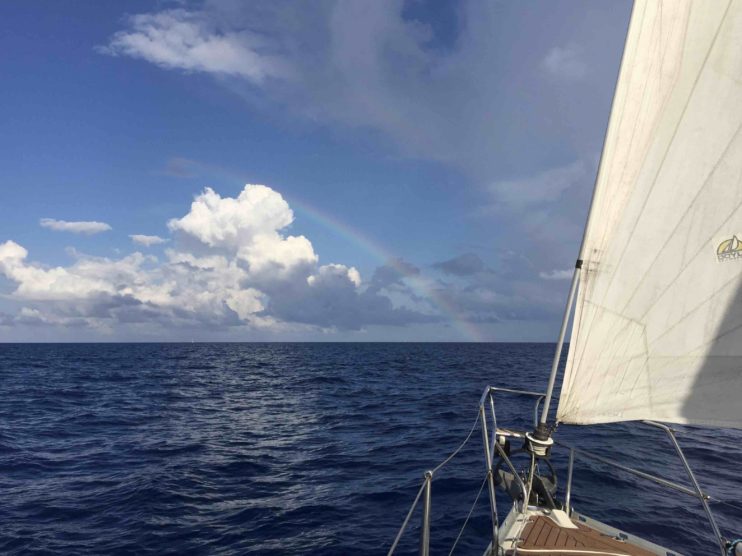 We had been looking forward to spending some time in Villasimius in the South of Sardinia because we could access the land via the marina and take care of the usual landjobs: laundry, shopping and getting rid of our rubbish. 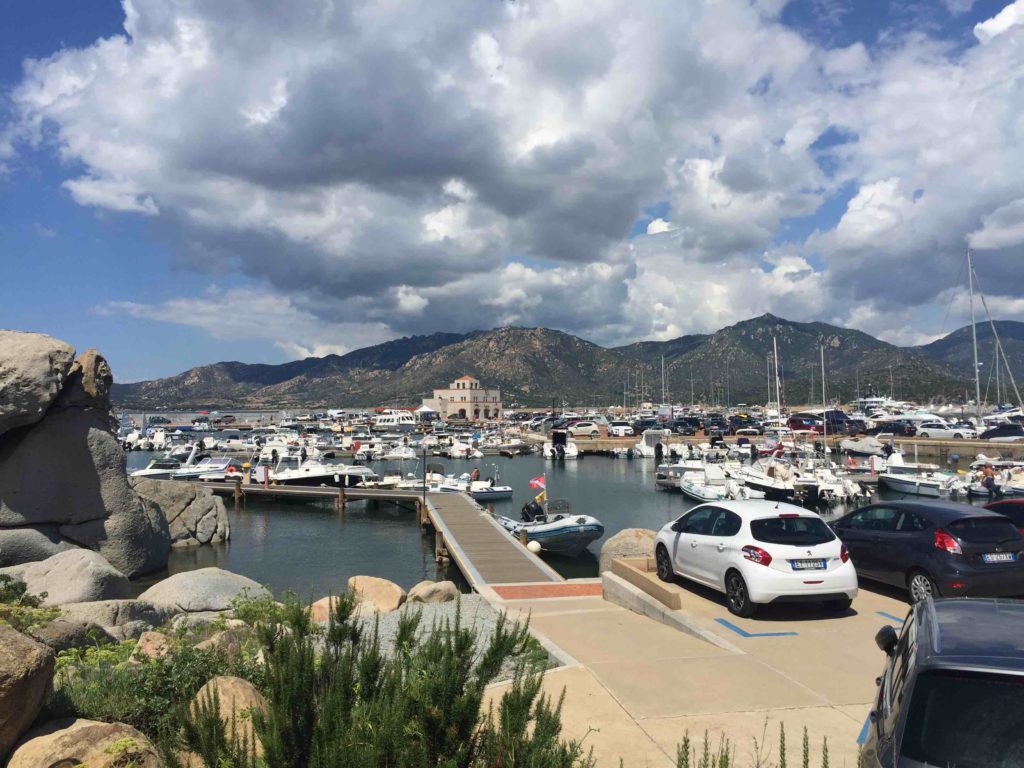 The busy and large marina of Villasimius.

There was no official dinghy dock in Villasimius marina but there was a wooden fence alongside one of the floating pontoons which was perfect for tying up the dinghy out of the way. It did mean you had to hop on land via some rocks but this was a small inconvenience. There were a lot of rental boats and boats organising dive tours in the large marina, which meant there were always people walking back and forth with bags etc. So we could easily sneak in with our rubbish bins and shopping bags. Or so we thought. We did not encounter any marina staff on any of our visits ashore, but our friends on Kittiwake, who were at the time in the same anchorage, were told to pay €10 to drop their rubbish in the marina bins! When they replied that in that case they would just carry the rubbish outside of the marina to find a bin there, they were told they still had to pay €10. In the end, they had to leave the binbags in their dinghy to get rid of another time.

But luckily, we had managed to drop our rubbish in the bins without any issue and were pleased to find a laundromat very nearby. For €14 we were able to do all our washing of the past few weeks. We even had some lunch in a nearby restaurant: a real luxury as we’d not eaten out in over a month!

The next job was to find the busstop. On the internet I had seen that there was a summer shuttle which would go past the marina and via several nearby beaches to Villasimius town. The center of the town, with supermarkets, was a good 45 minutes walk up a hill. A bit too much in the August heat so we were glad there was a busservice. 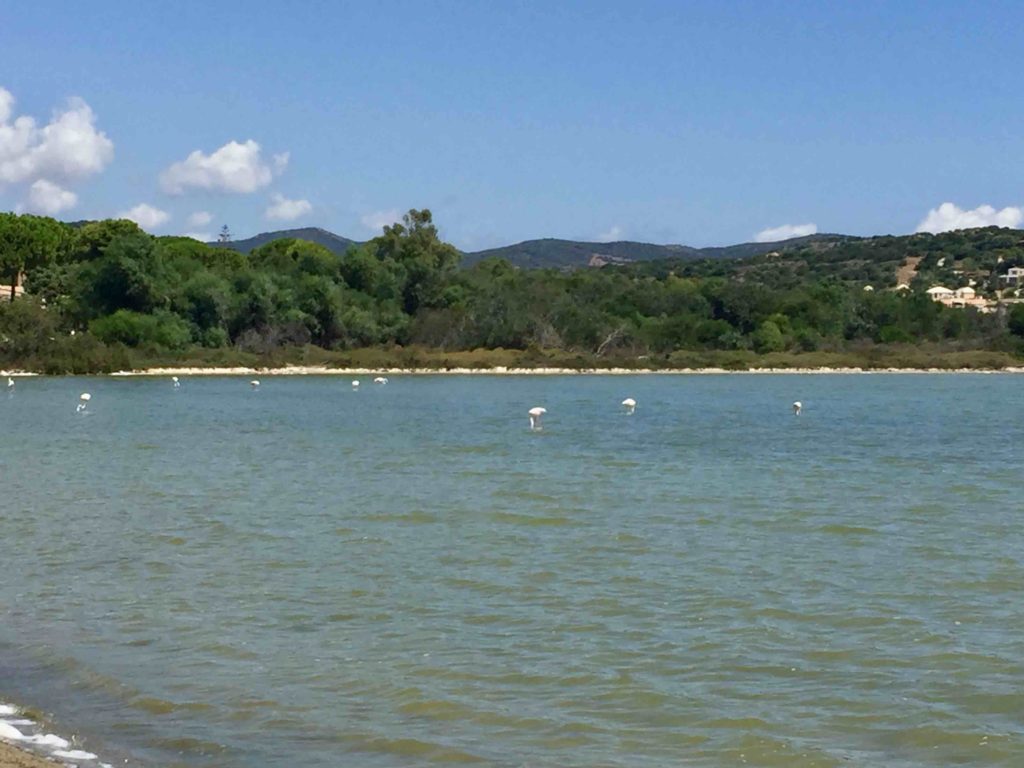 Near the marina was a lagoon with flamingos. It looks pretty peaceful here but just behind it was an extremely busy beach.

A minivan full of groceries

The busstop had no indication other than painted lines and the word BUS on the tarmac opposite the marina office. According to the website the bus came once an hour. So the next day we waited at the busstop (we hoped) about 15 minutes before the indicated timeschedule, ready for a big shop. We were lucky and the bus arrived exactly on time! Unfortunately it was not a proper bus but rather a small minivan with very cramped seating for about 10 people. The other passengers were obviously all beach-goers and the service was not meant for transporting bags of shopping. Anyway, that was a problem for later.

We got off near the center of the town and had a look around. As it was lunchtime, we treated ourselves to another meal out (pizza ofcourse!). After an espresso we were ready for our big shop. A few hours later we had gathered our 7 bags of shopping… How the hell were we going to get these on the bus?

Checking the way into town 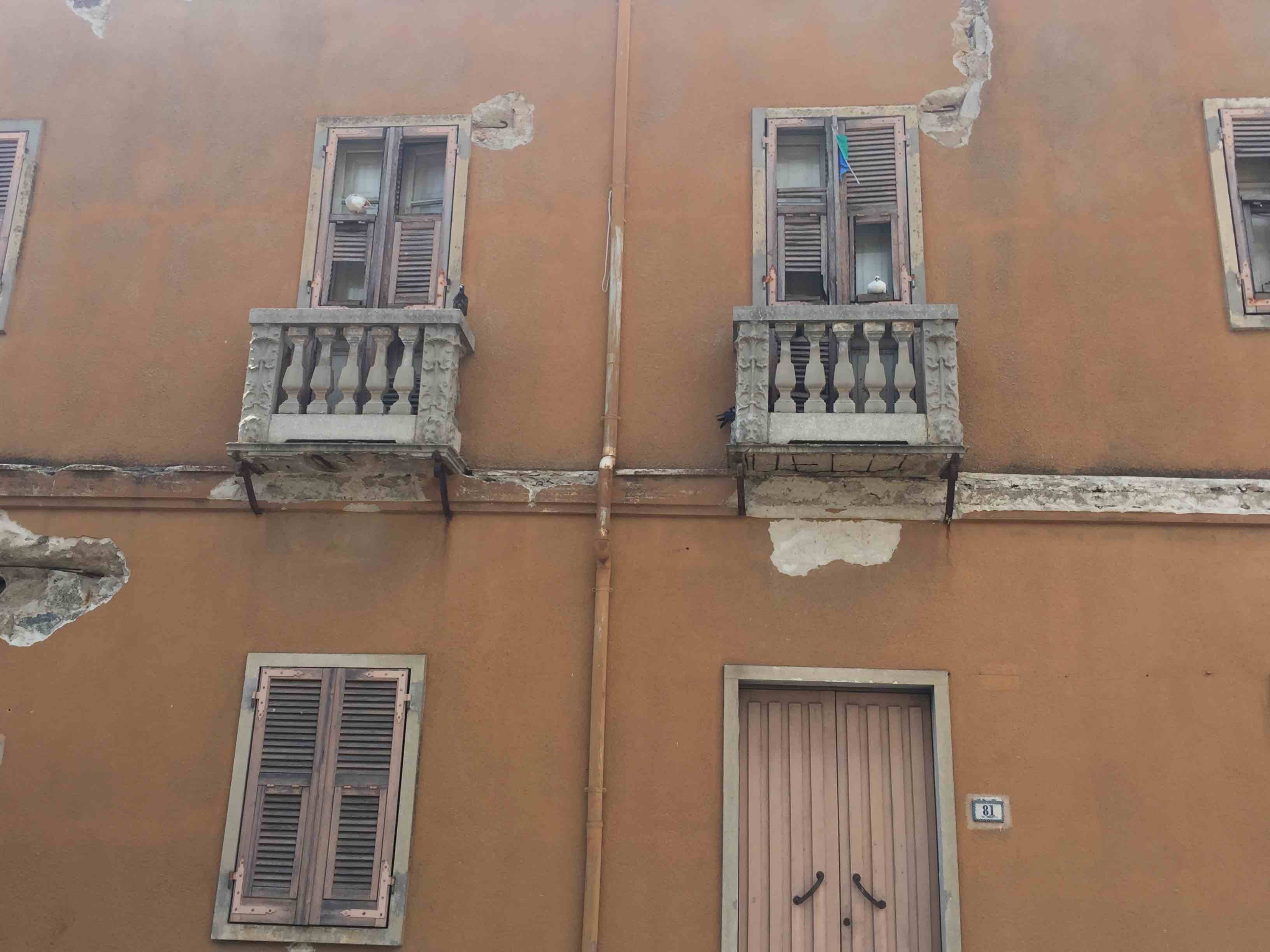 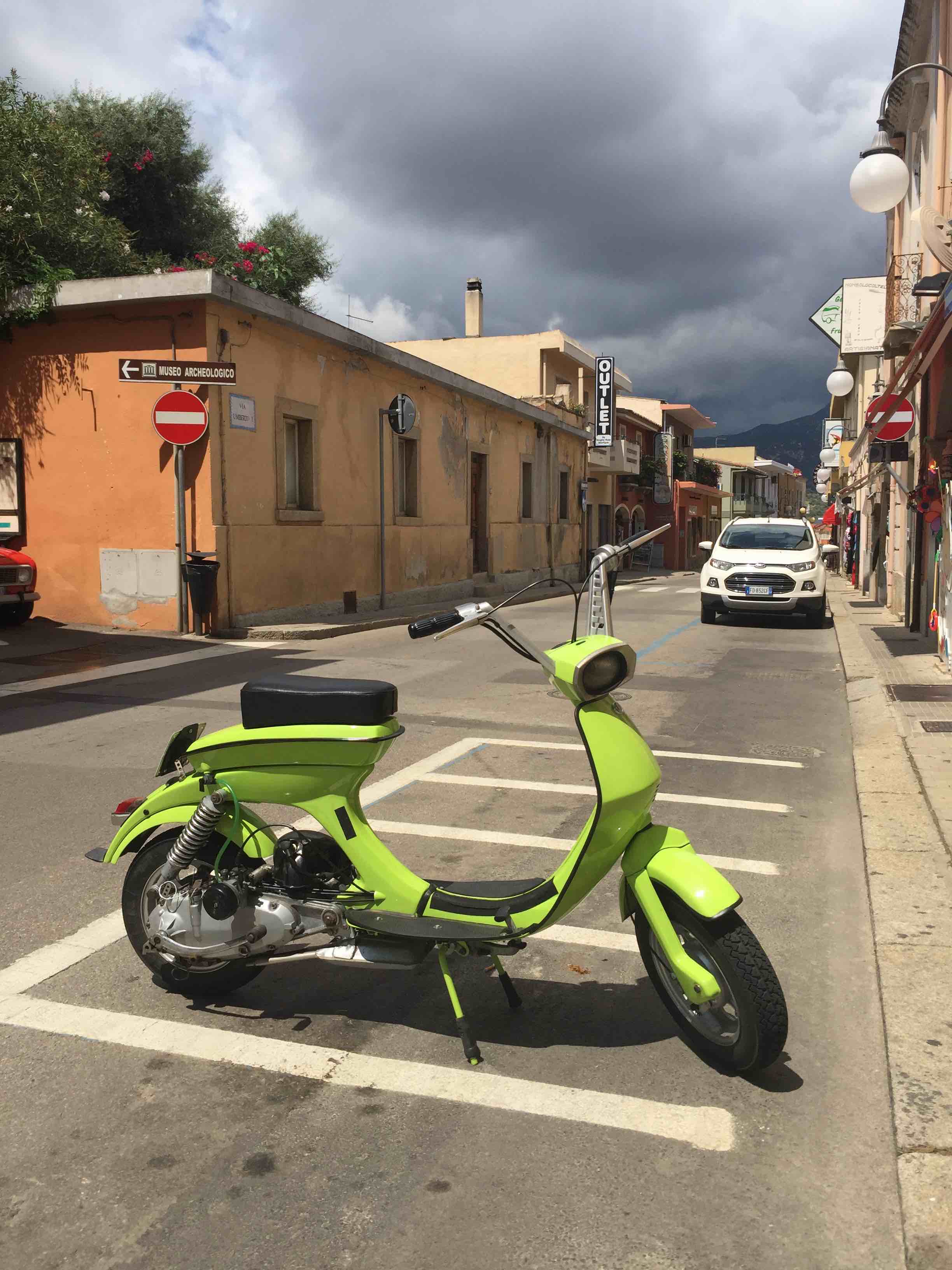 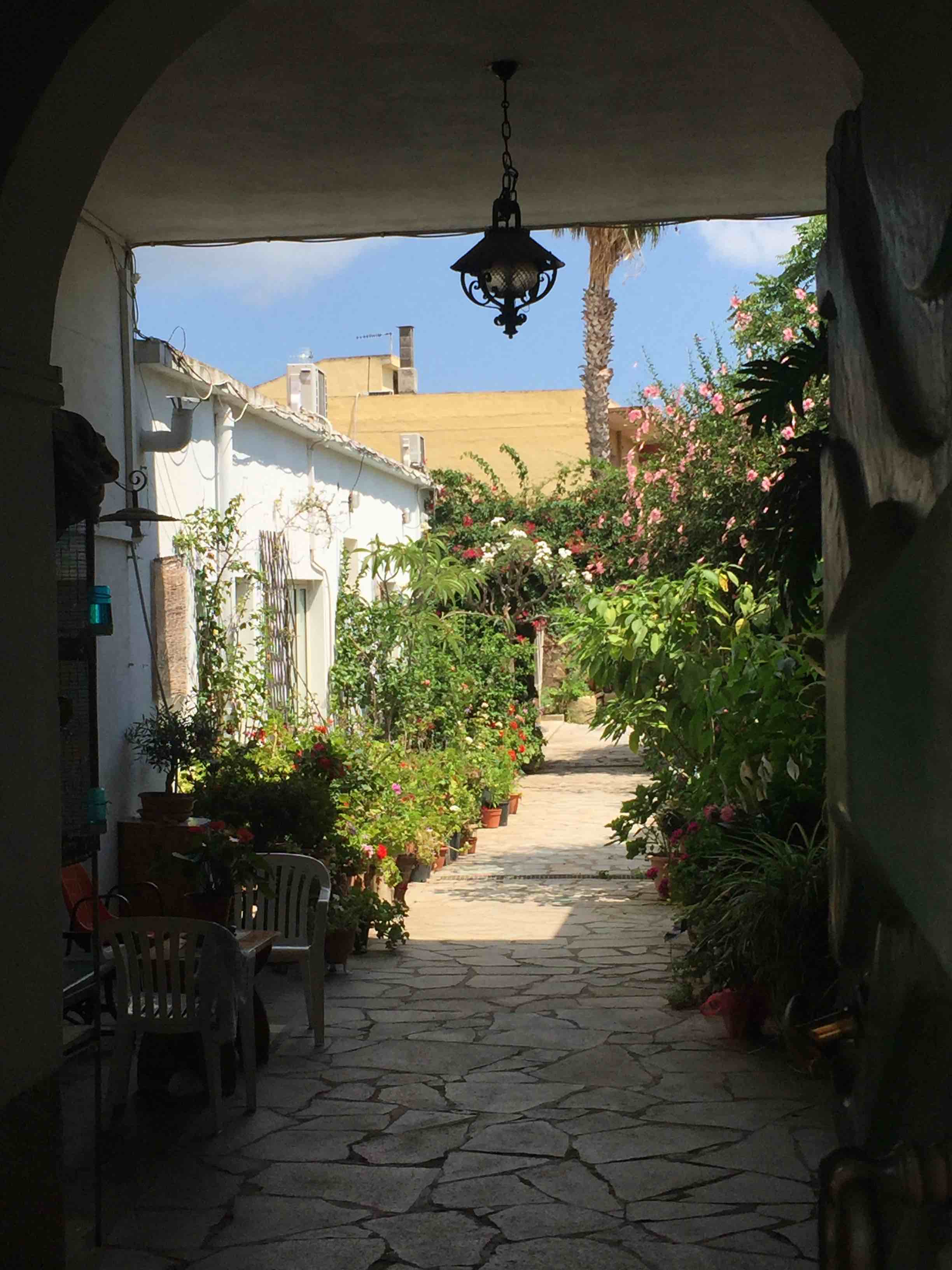 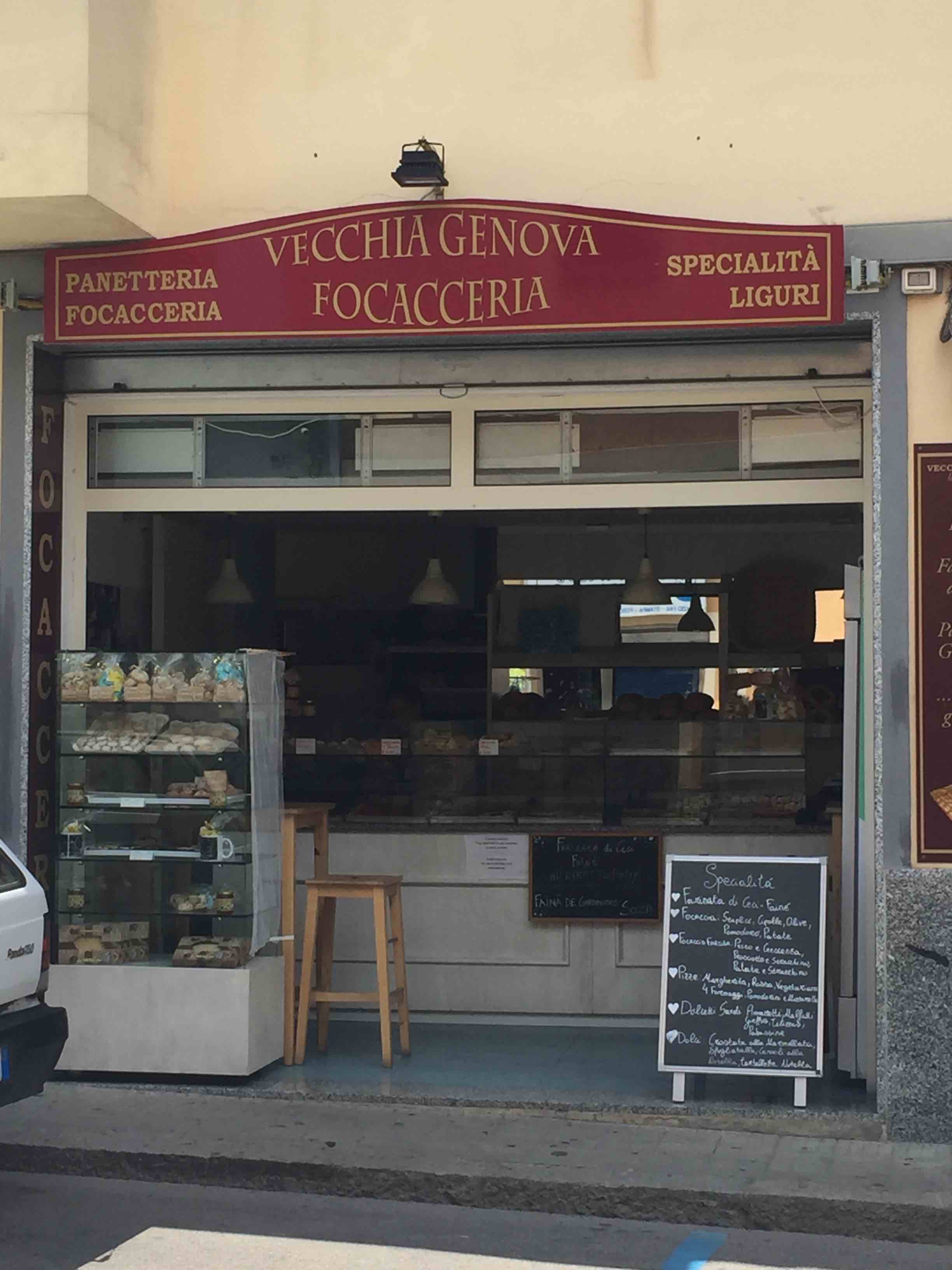 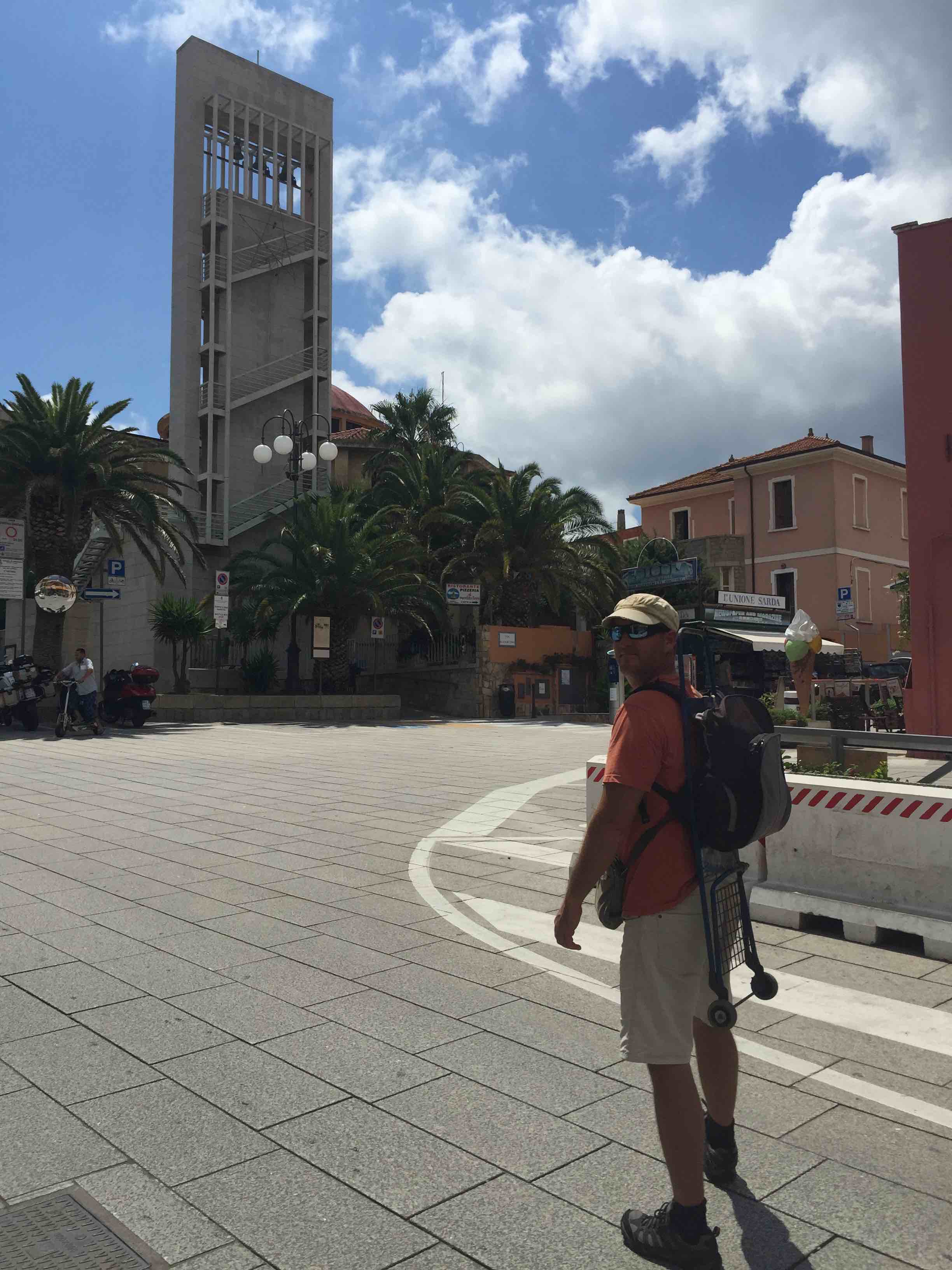 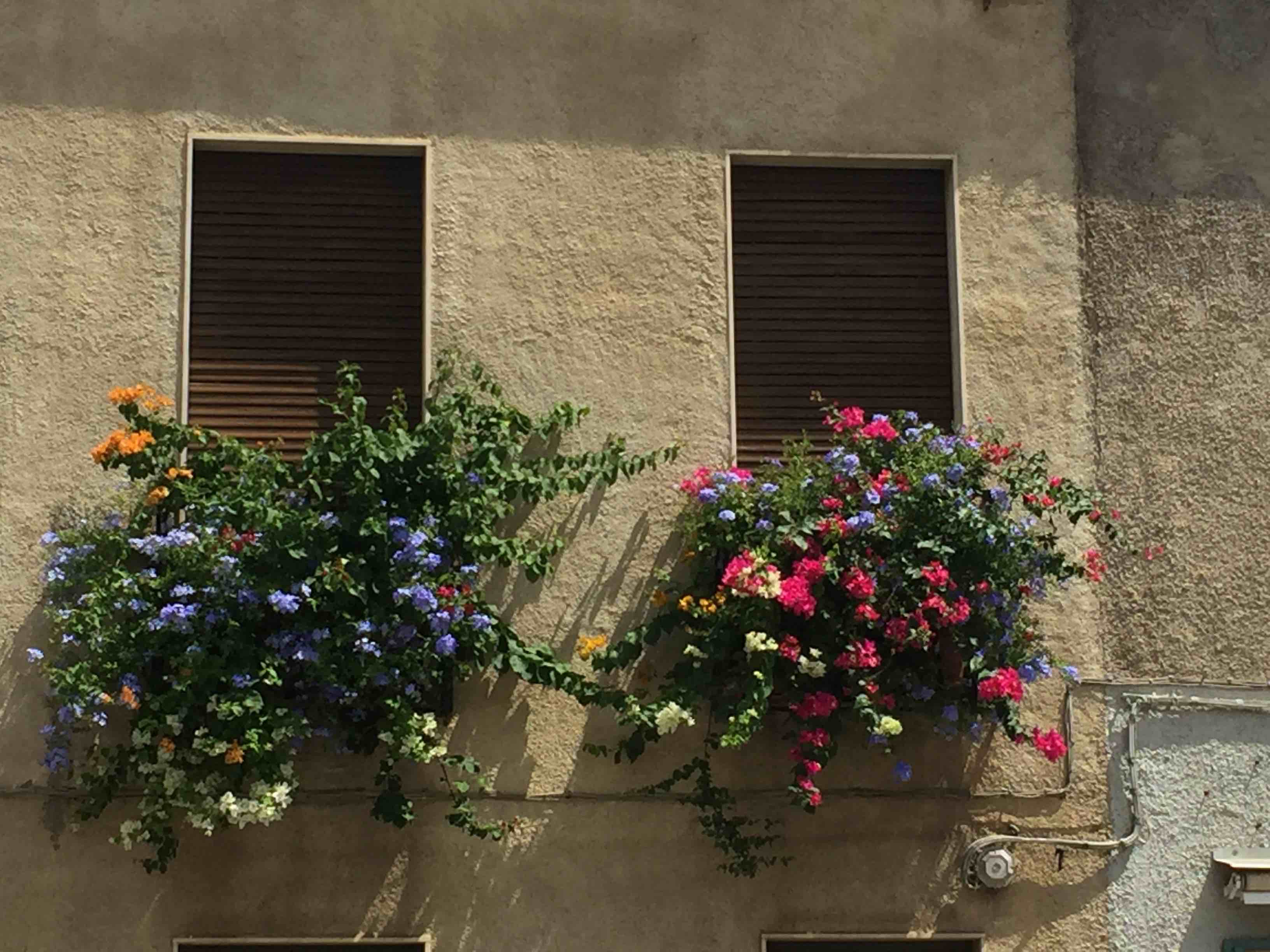 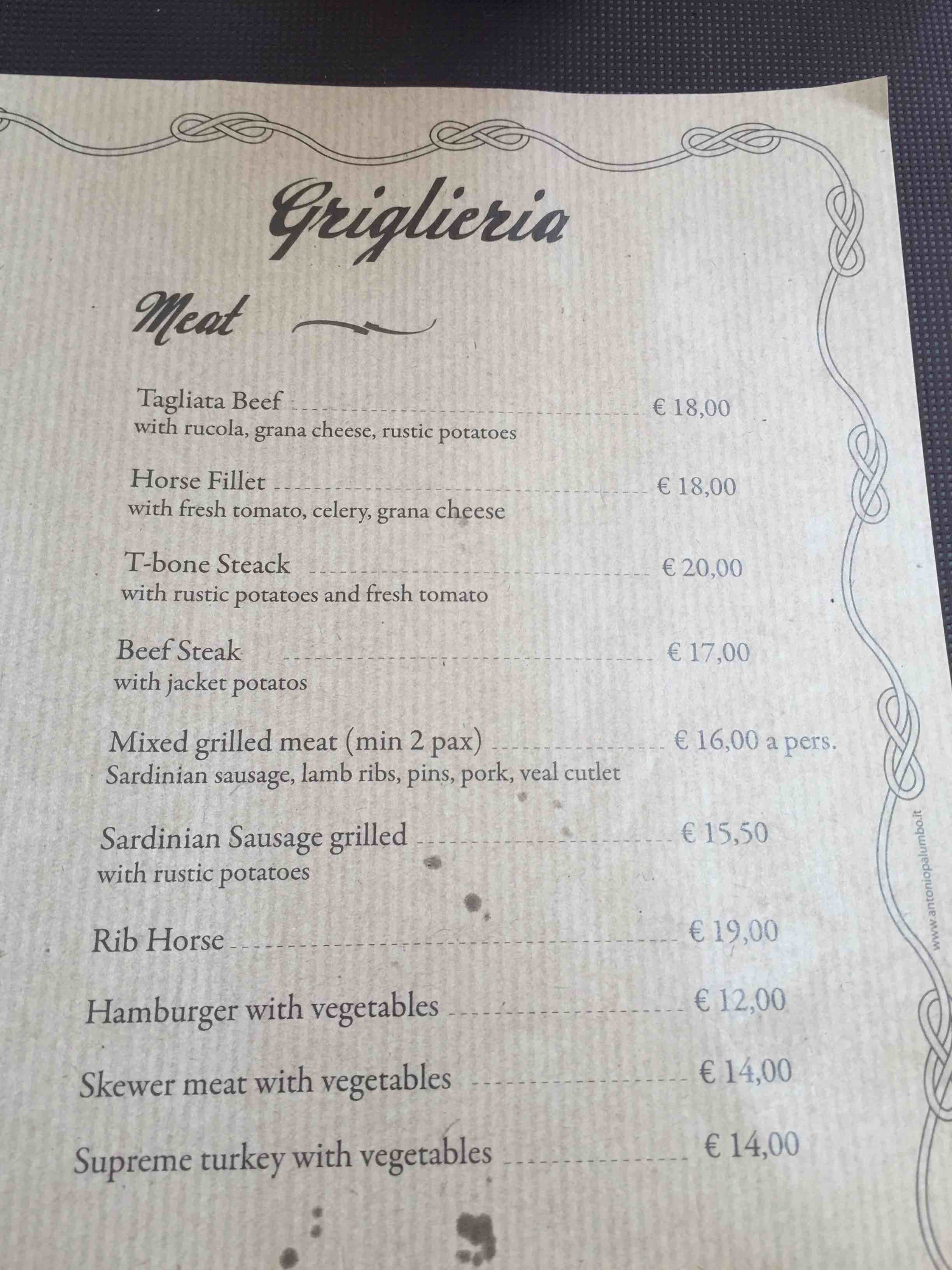 Apparently it's quite common to eat horse-meat in Italy 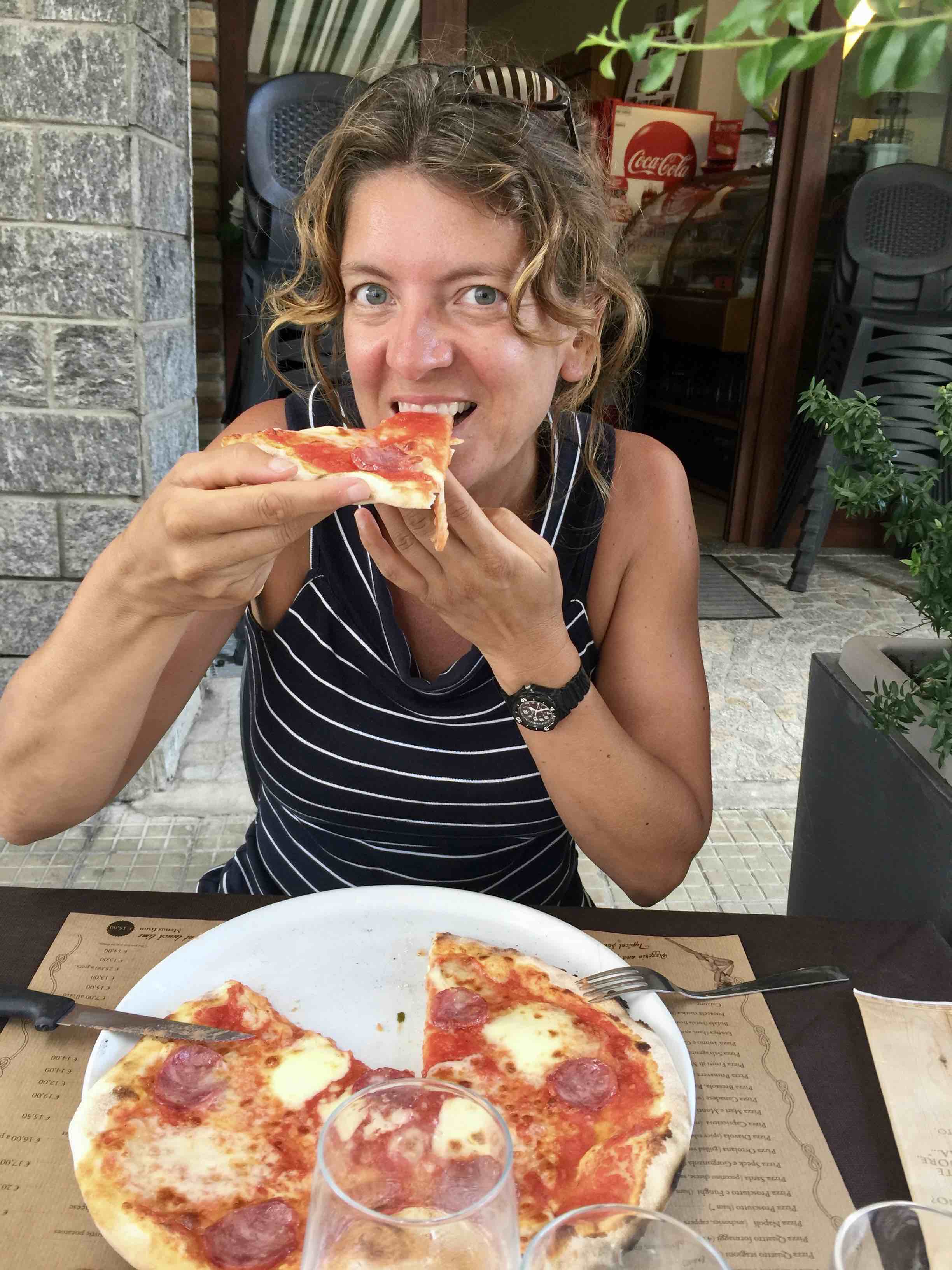 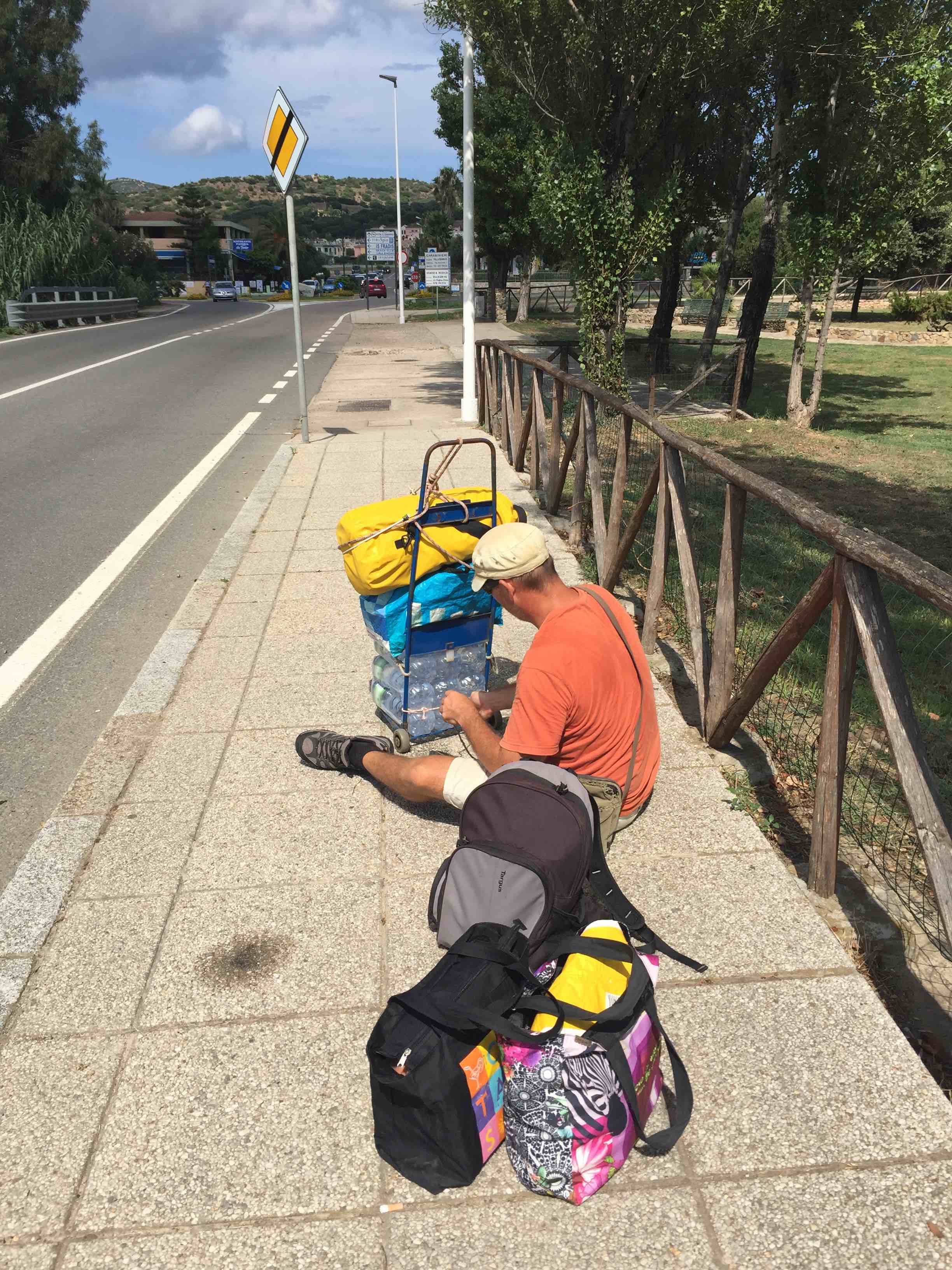 When you only go food shopping once every few weeks... 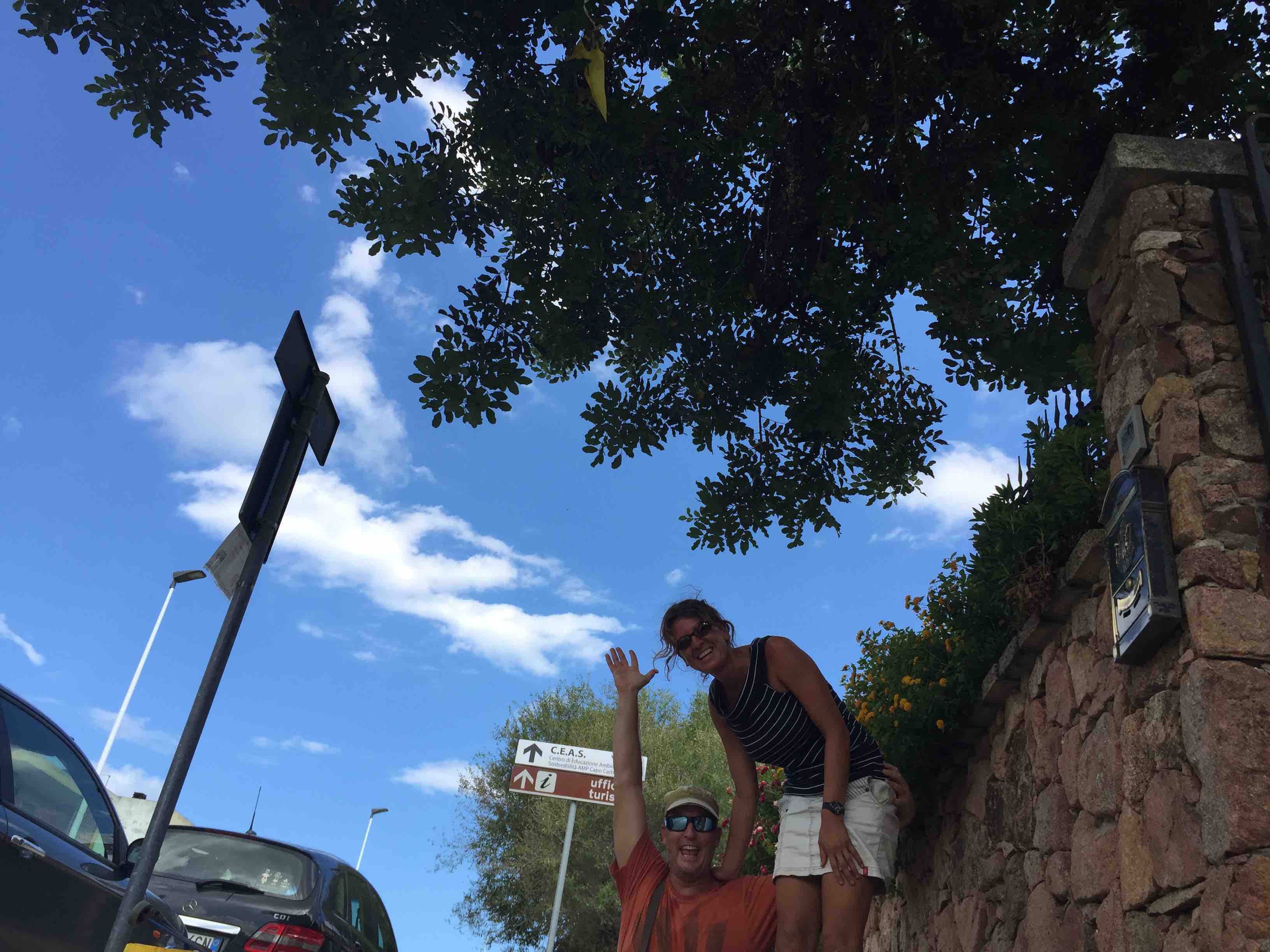 When you use the timer on your phone to take a photo but the aim is too high...

We split the bags between the two of us and somehow managed to squeeze past all other passengers (banging them in the head with our shoulder bags) to the backseat. A sixpack of water remained on he floor near the door because there was no way we could fit it in our seats. Nobody, including the driver, seemed to be too bothered so we got away with it. Back in Villasimius marina we saw dark clouds gather above the anchorage. We made it just in time to Goodvibes before the rain and thunder started. 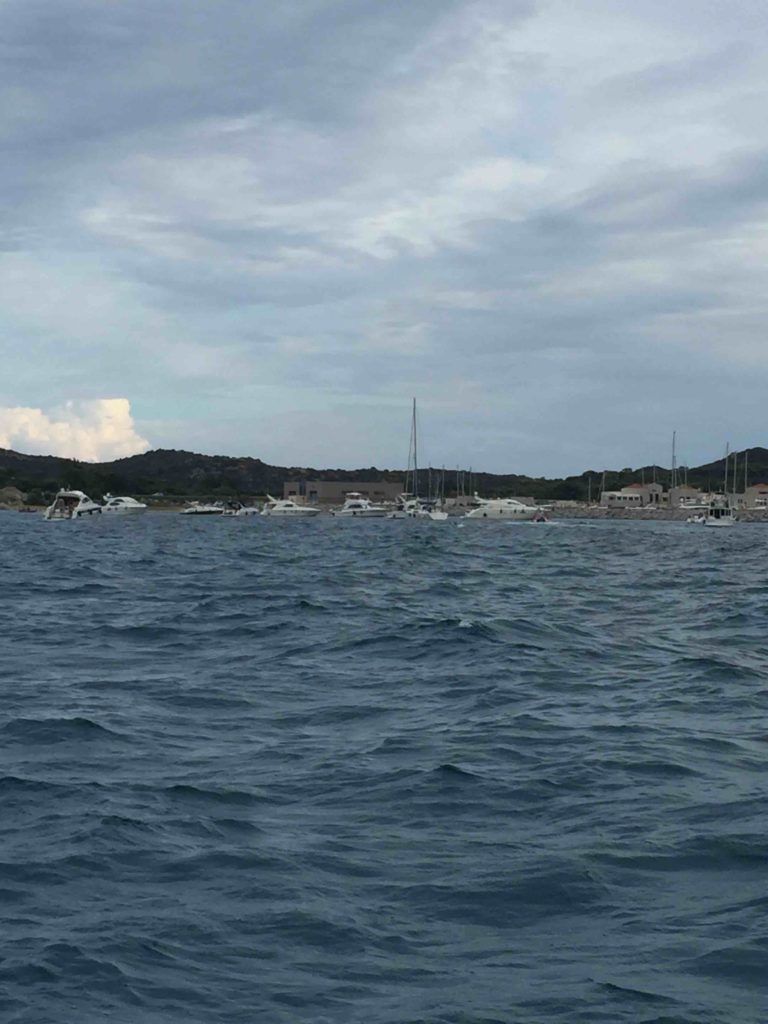 What’s with the weather?

The next day we repeated the bustrip to Villasimius with Susan. She had joined us in Villasimius the day before (after cruising the Southcoast of Sardinia) and was also keen on doing some provisioning.This time we made sure we came back with a more manageable amount of shopping. The weather was very similar to the day before; in fact it deteriorated very soon into a storm with a strong wind that whipped up a nasty swell.

For a few hours we had the swell right on the beam. Goodvibes swung from left to right, worse than in any sailing we’d done so far. Luckily it stopped early in the evening so we were able to sleep because we had planned to cross to Sicily the next day. 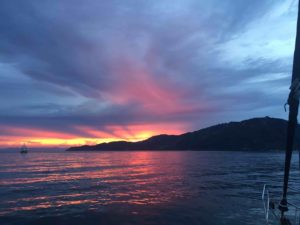 The stormy weather made for a beautiful sunset

When we woke up there were again rain clouds in the sky but the wind and swell forecast was allright for the crossing. Together with s/y Wilma and Vaare we had decided to set off around 3pm in the afternoon. Susan would not join us and would stay in Sardinia a bit longer.

We had quite a few preparations to do: dinghy up to the fuel dock to get some jerrycans of diesel and water, haul up the dinghy to deflate it and tie it up on deck; deflate the sup-board; cook a few passage meals. But again the weather acted up: just after Jon managed to get the diesel and water, it started raining and it continued, intermittently, for 3 hours. Now everything was soaking wet. We decided to wait a bit longer to give the dinghy, sup-board and outside covers a chance to dry.

Wilma and Vaare left at the agreed time and we followed an hour and a half later, after we had stowed away the barely dry items.

The passage started off well: we could see a weather system to the left of us and one to the right of us but as a result we were getting fantastic wind behind us. Very soon we were doing 5.5 knots and quickly catching up on Wilma and Vaare in front of us. We could see lighting ahead of us but it seemed very far away and since we’d been having thunderstorms almost every afternoon for about a week now, we didn’t consider this to be an issue. At 9pm we put a precautionary second reef in for the nightwatch. 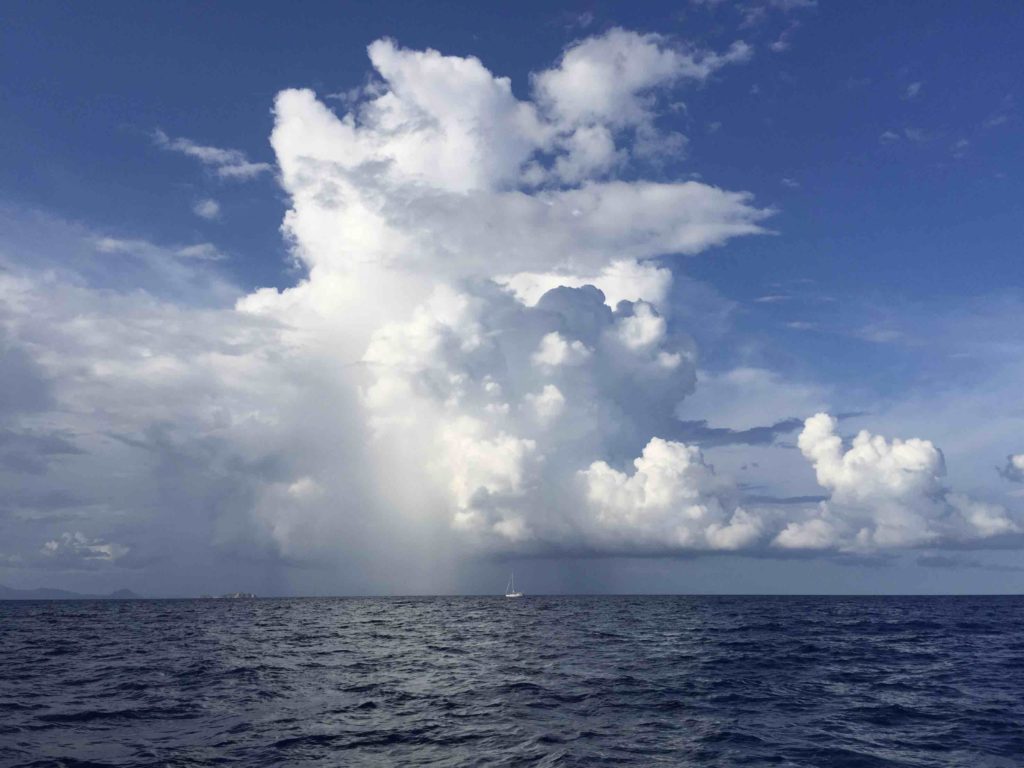 The weather system on our left 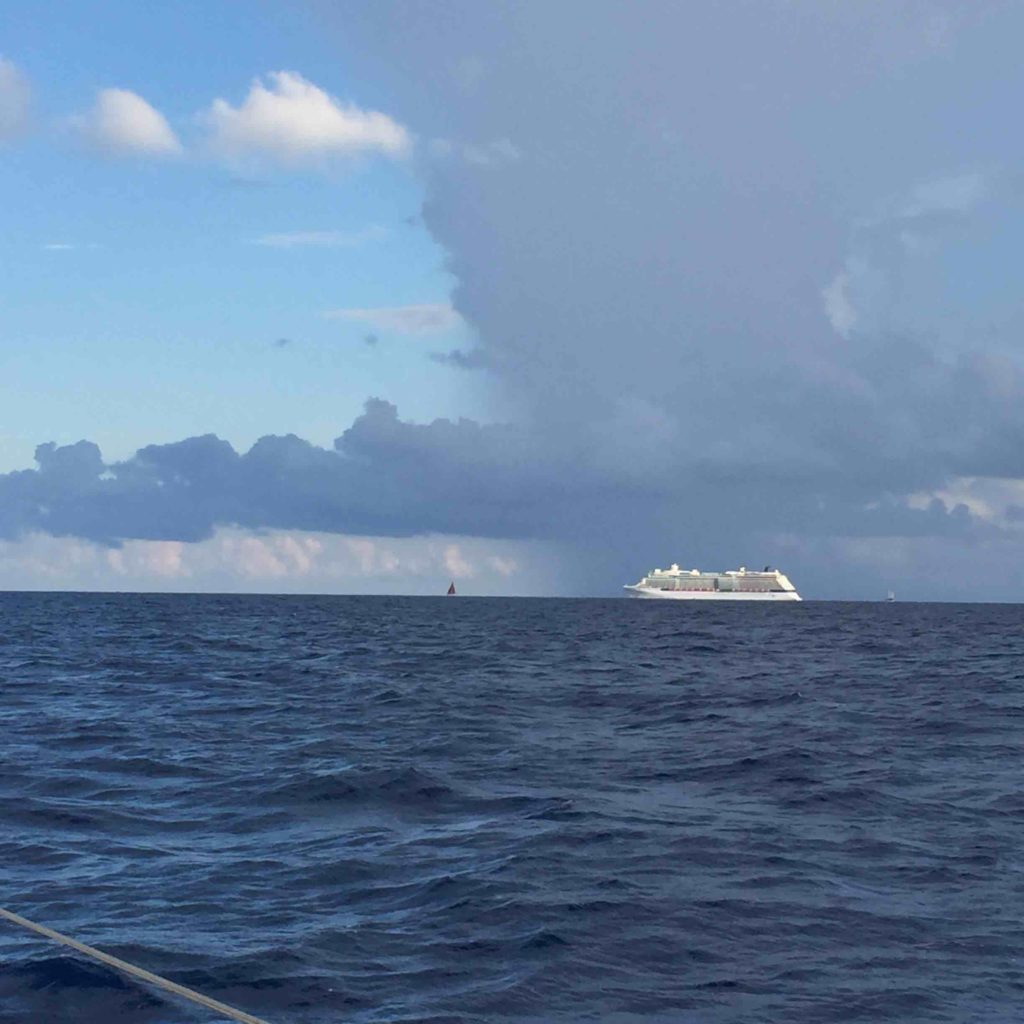 A cruiseship passing just in front of Wilma (left) and Vaare (right). This also shows the weather system that was on our right.

I went to bed around 10 pm, just after Jon had turned on the engine because the wind had suddenly died down: the weather systems besides us had moved further away. The lighting storm in front of us, however, had spread and intensified. After a while – I wasn’t sleeping yet – Jon told me that he wasn’t happy with what he was seeing and that he thought we should turn around. He contacted the crew on Wilma via the VHF, and we all decided to give it a bit more time. They were going to keep a close eye on their radar to see which way the system was moving. In the meantime all three of the boats changed their course to the North to try to sail around the weather.

The lightning was absolutely astonishing: it spread for about 100 degrees all the way in front of us. Every 10 or 20 seconds there was a discharge: sheet lightning that brightened the towering cloud formations alternated with cloud to ground flashes. There was very little thunder to be heard and fortunately there also wasn’t much rain or wind. It was purely the frequency and intensity of the lightning that made us all decide at midnight to turn around to Villasimius.

It was my turn to take watch and we were, at this point, sailing back in the opposite direction. Via AIS we can keep track of the speed of Wilma and Vaare which usually gives us a pretty good indication of whether they are sailing or on the engine. Wilma had initially been ahead of us, so after we turned around they were behind us, i.e. closer to the lightning storm. When I saw that they were going close to 7 knots I realised they were going fast on the engine in order to get away from the storm as quickly as possible as it was catching up on them. I also turned on the engine and hoped that we were able to stay ahead of the weather system.

After an hour it looked like the system was no longer closing in on us and I turned off the engine. We sailed for another hour but due to the lack of wind we had to engine the last few hours back to the anchorage. At 5am we were back in Villasimius. It was a little bit tricky to anchor in the night so rather than moving in between the other boats we dropped the hook on the edge of the anchorage. 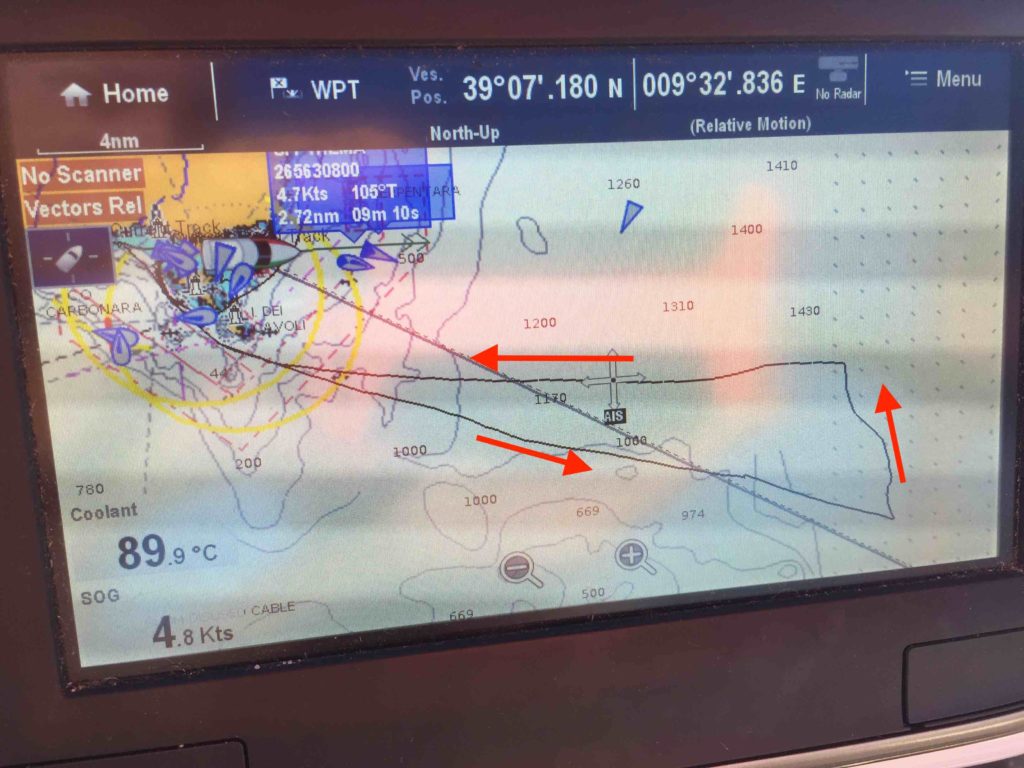 Track of our route out and back in

The next day we found out that the storm cell had been enormous and spread all the way to Sicily. Were we glad we decided to turn around! We started reading up on thunder and lightning weather predictions and the CAPE (Convective Available Potential Energy) index. So far we did not really take this into consideration but from now on we sure will. 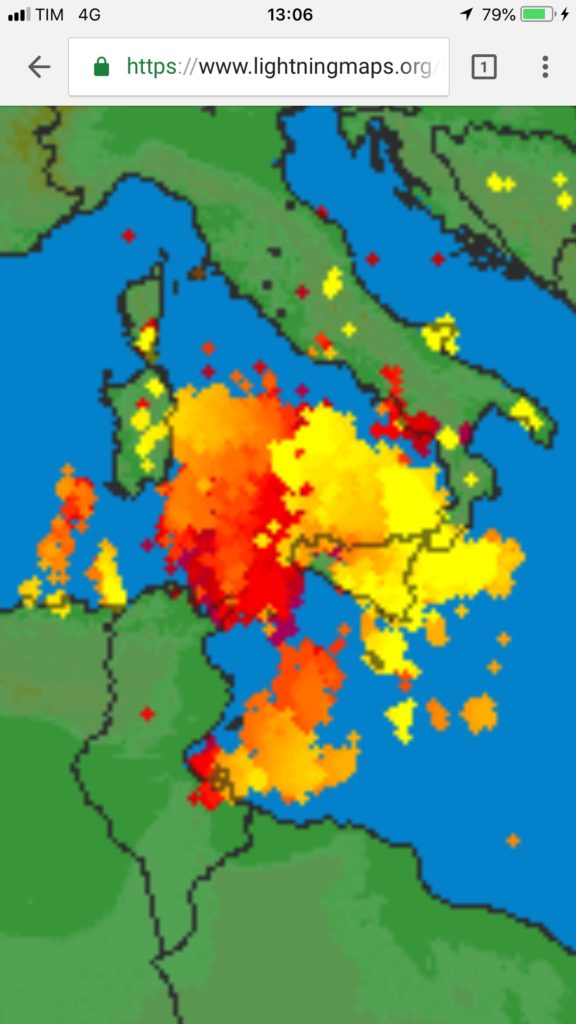 After a few days the forecast was for a strong Westerly wind. The anchorage in front of Villasimius marina does not provide a good protection against Westerly swell – as we had learned the hard way. So we moved around Cape Carbonara to a large anchorage in front of the beach of Simius. There was a lot of space here and the hills on the coast offered good protection from the wind. Now it was just a matter of waiting for a good weather window to try to cross to Sicily again. 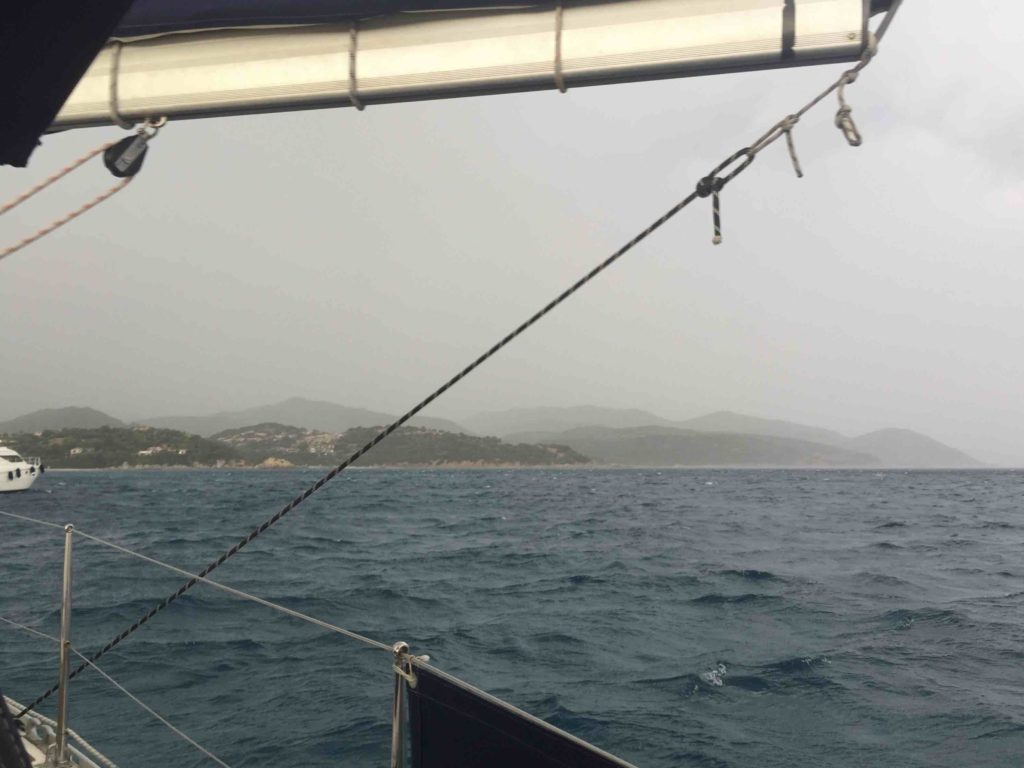 More bad weather after we had moved to Simius. The rain came down heavily but fortunately we were sheltered from the wind and most of the swell.