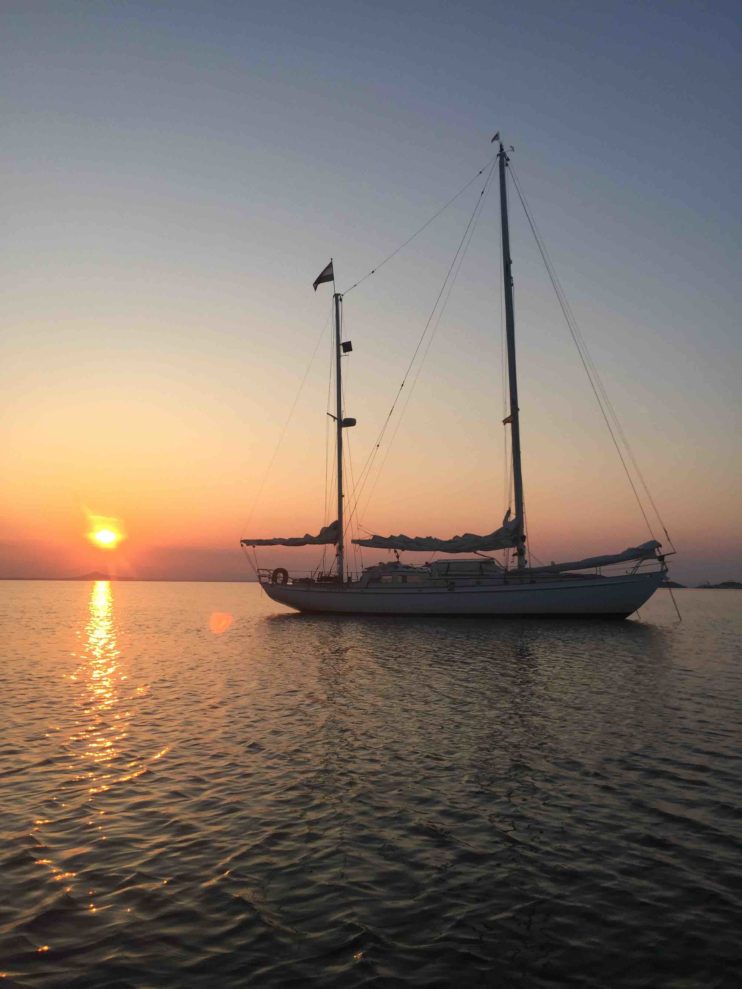 One day at anchor in Mar Menor we received the following invitation from our neighbour on a beautiful ketch flying the Dutch flag: 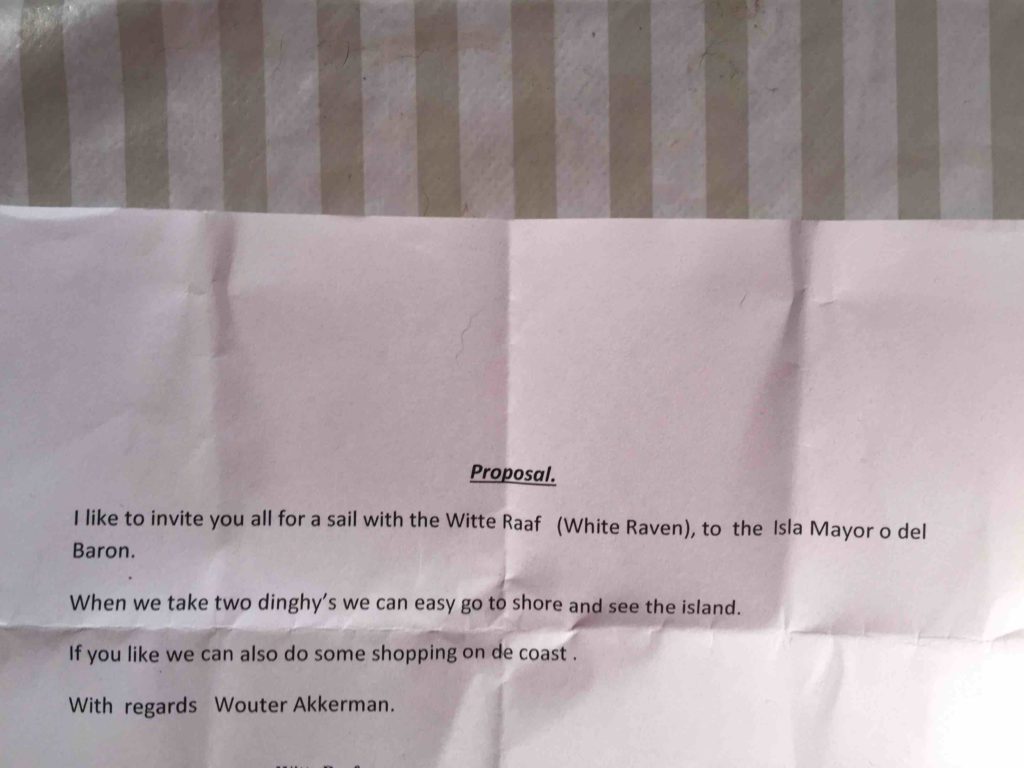 Of course we were up to nosing around somebody else’s boat, particularly a beautiful one such as  De Witte Raaf (‘White Raven’). The next day, we picked up some of our friends from the other boats with our dinghy and boarded this magnificent vessel with a fascinating history. 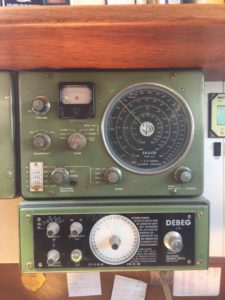 The story of the White Raven

Wouter, the current owner of the White Raven, showed us some albums with newspaper articles, photo’s and even original designs (previously under copyright of the builder) of this traditional Dutch ship.

The boat was designed in 1954 for the director at the time of the Dutch electronics company Philips, Ir. Tromp. He was a keen sailor and wanted a ship for both cruising and participation in competitions. In 1963 the ship was moved to the Philippines, to a new owner. However, Mr Tromp wanted to keep the name ‘Witte Raaf’ (White Raven) for his next boat, so she was renamed to ‘Trident’. Perhaps superstition is right and renaming a ship brings bad luck, because after only 2 weeks the ship got seriously damaged in a hurricane in Manilla.

She was completely done up and proceeded to participate various times in the China Sea Race. In 1972 she sailed back to the Netherlands where she was sold to another owner. In 1985 she was bought by Wouter. After consultation with the heirs of Mr Tromp he was allowed to give her her old name: the Witte Raaf was back!

Between 1996 and 2002 she was almost completely gutted and restored by Wouter himself. He redesigned the interior and very cleverly designed lockers and storage areas for all little corners. The Witte Raaf is full of clever solutions such as: 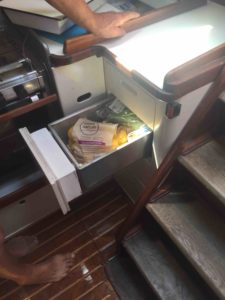 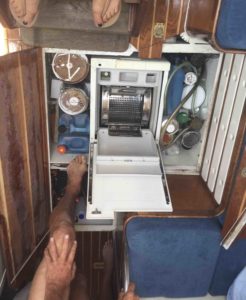 A washing machine in the bilge! 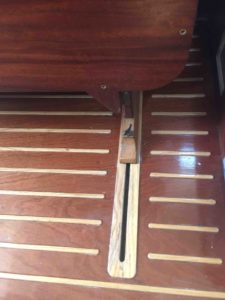 After a tour of the boat, Wouter hoisted the sails with Jon behind the helm and we sailed towards another island in Mar Menor. We anchored and were just about to go ashore to have a look when a motorboat with a few Spanish guys approached us. We were kindly told that the island was privately owned and we were not allowed to enter it. Ah well, we decided to have some lunch instead. The next stop was going to be the mainland to do some shopping, but as it was still siesta time there was no point going there yet. 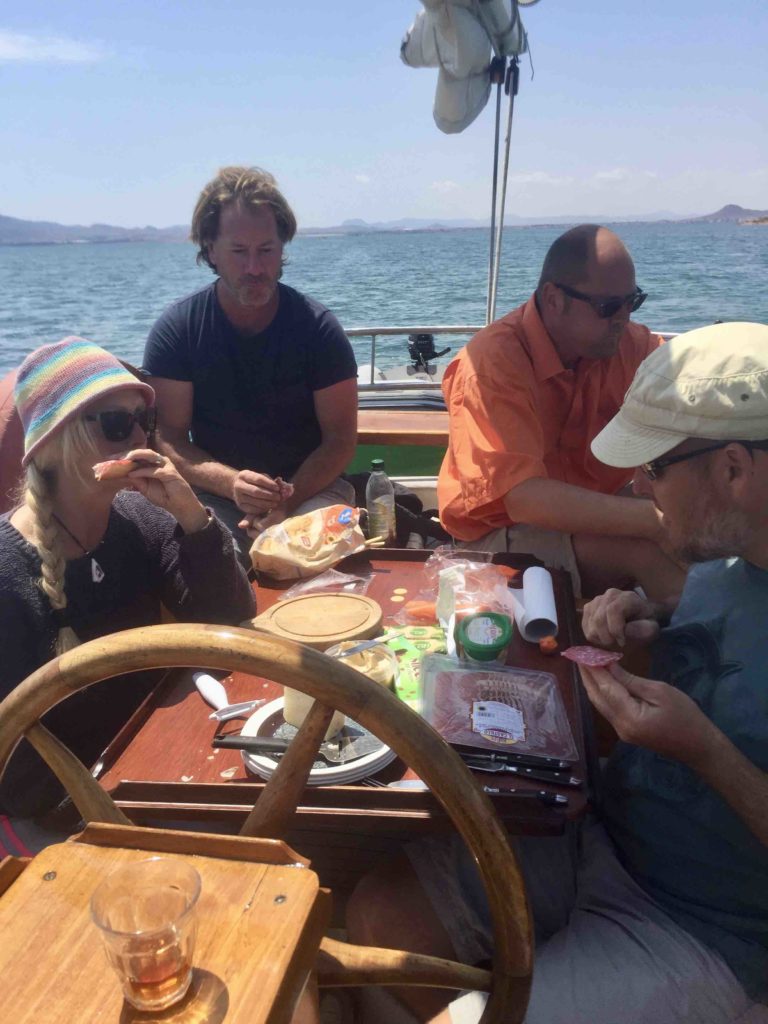 Lunch with a view

Around 4 pm we hauled up the anchor and set sail towards la Manga. It was not very clear what the best spot was to anchor: there was a little marina to go ashore or we could go a bit further down which would be closer to the shops. At this time Helena was at at the helm and we were waiting on Wouter to drop the anchor. We were all very closely watching the depth meter indicating the waterlevel below the keel, as it was getting quite shallow close to the shore. 1.0 m, 0.9m, 0.8m… ehm, shouldn’t we anchor by now? But Wouter had no fear. He said he’d anchored in 2 decimeters before. Finally the anchor went down but the meter was indicating 0.0 !! Helena put the engine in reverse and what we feared had happened: we were not moving an inch – we had run aground!

We were all a little bit anxious but not Wouter: he took the helm, put the engine in forward, wiggled the ship loose, and reversed back to (slightly) deeper water. Obviously a man with experience! 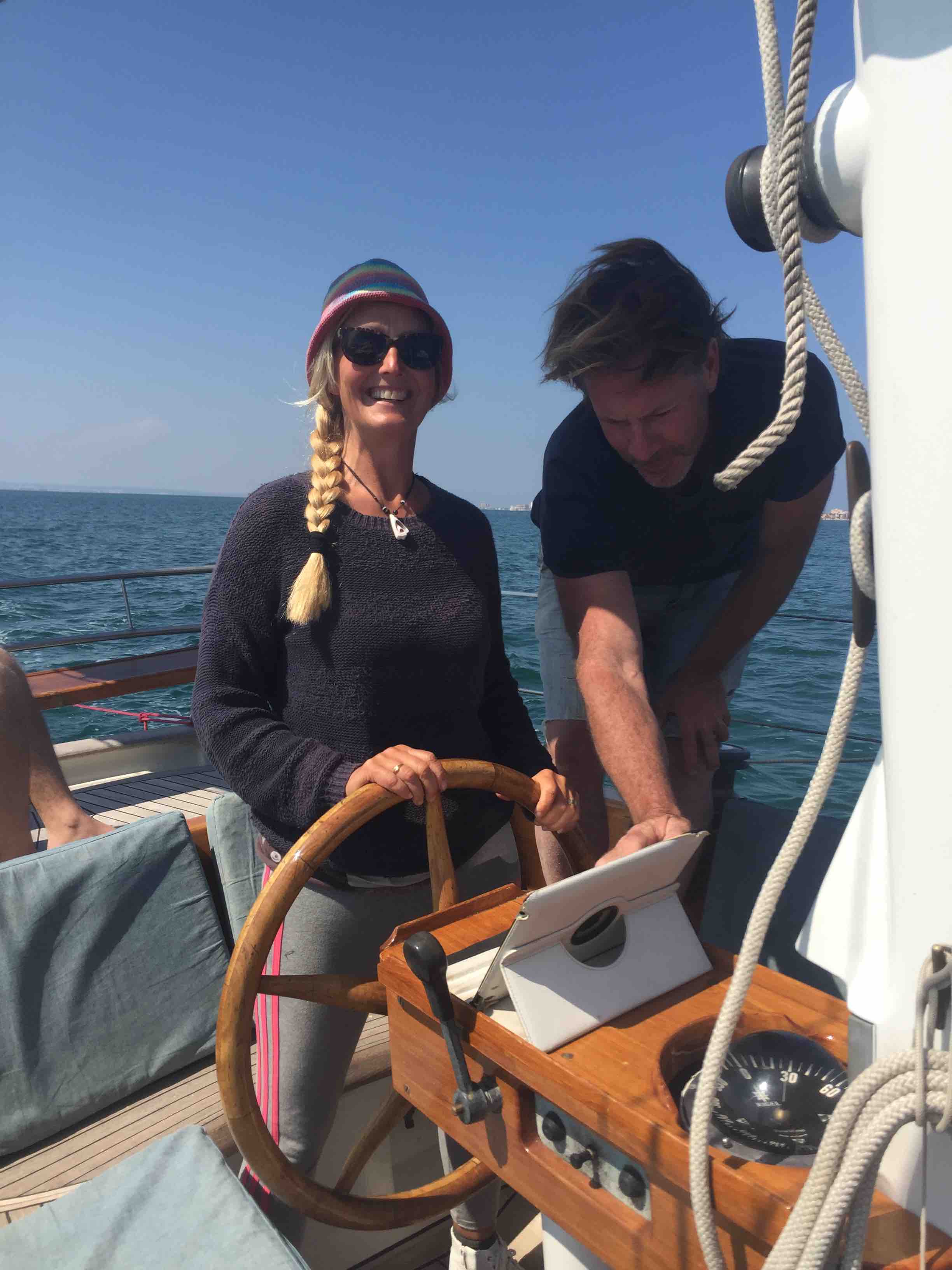 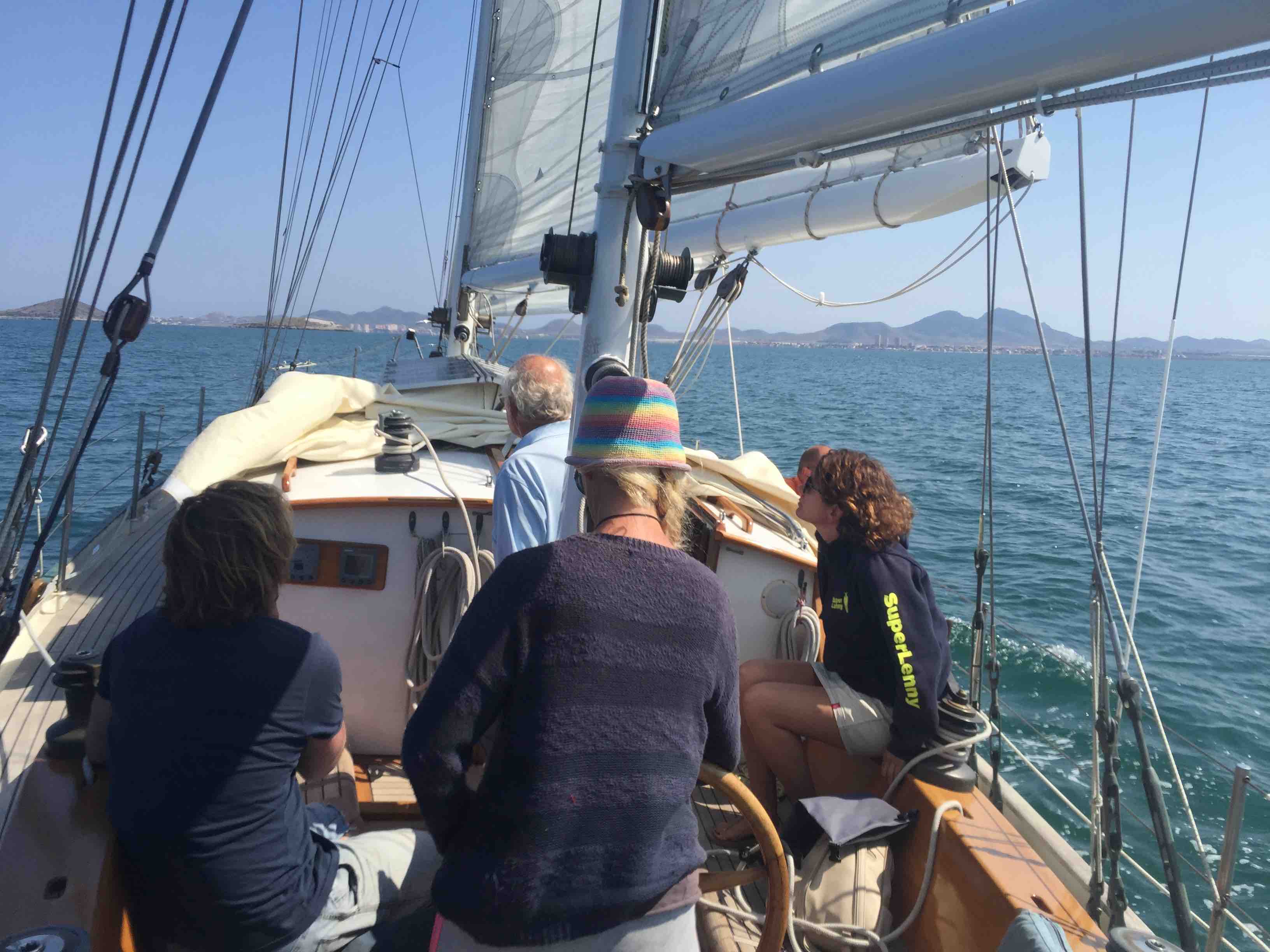 What a lovely day for sailing 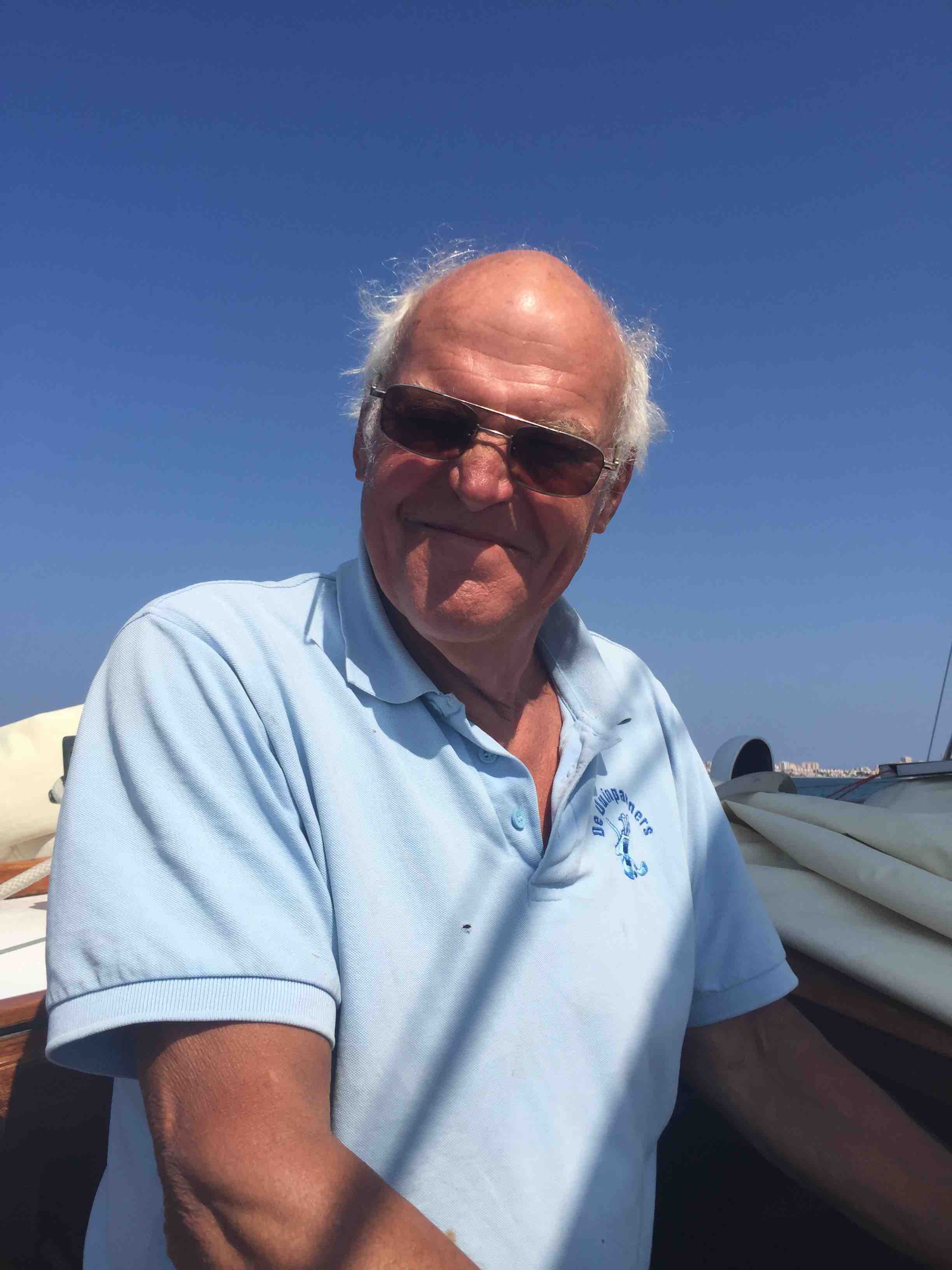 Wouter - owner of the White Raven 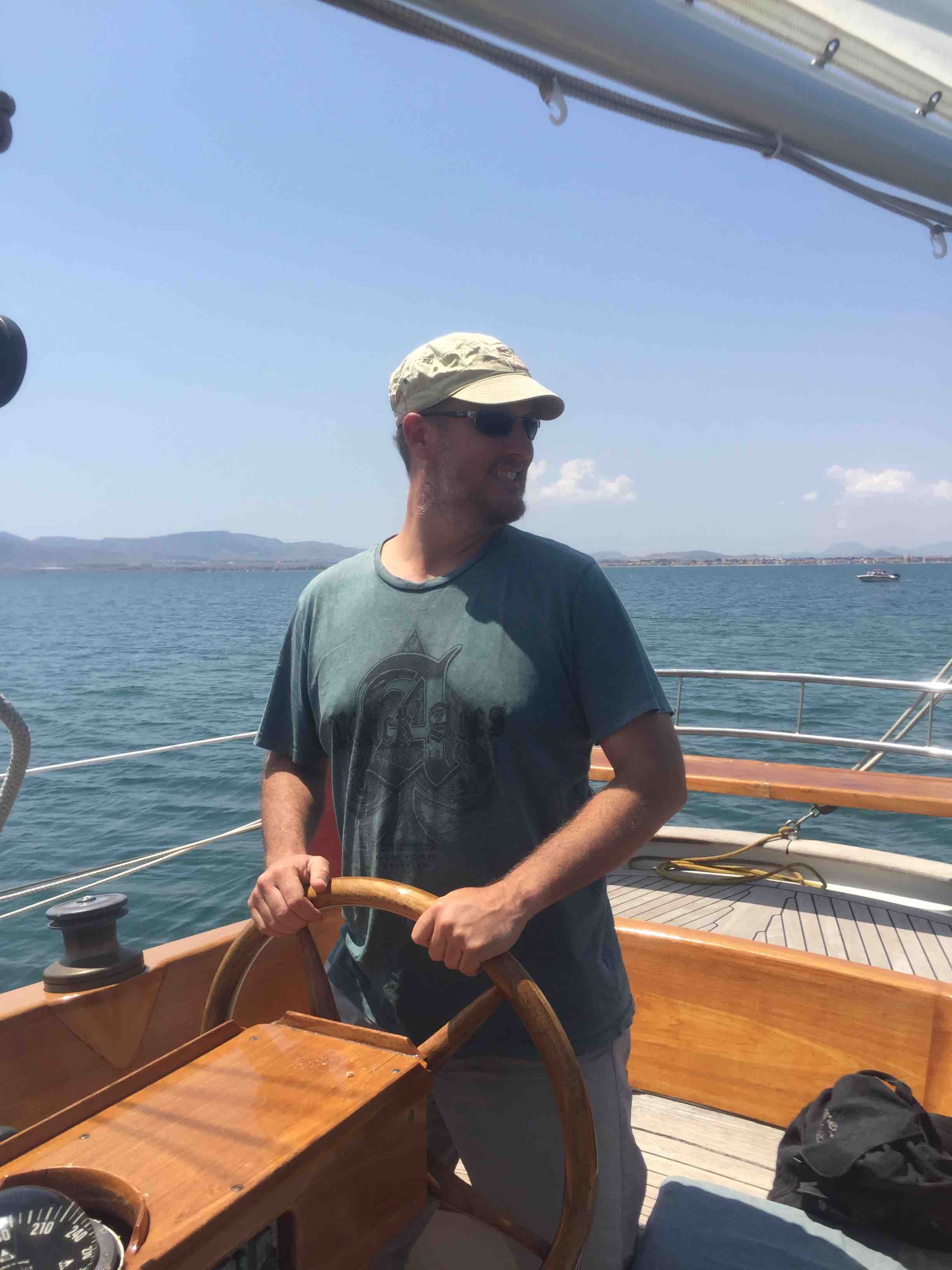 Jon at the helm 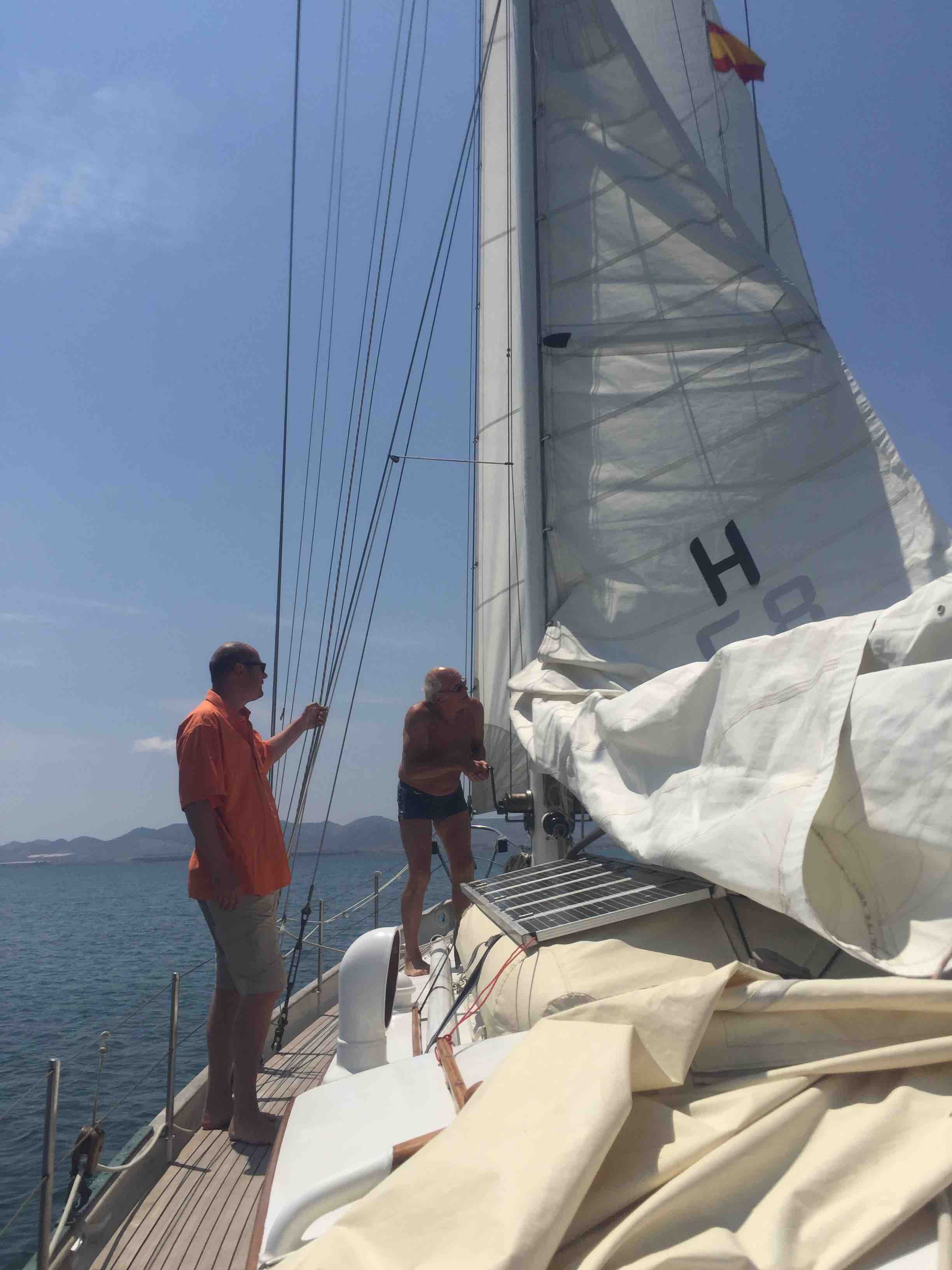 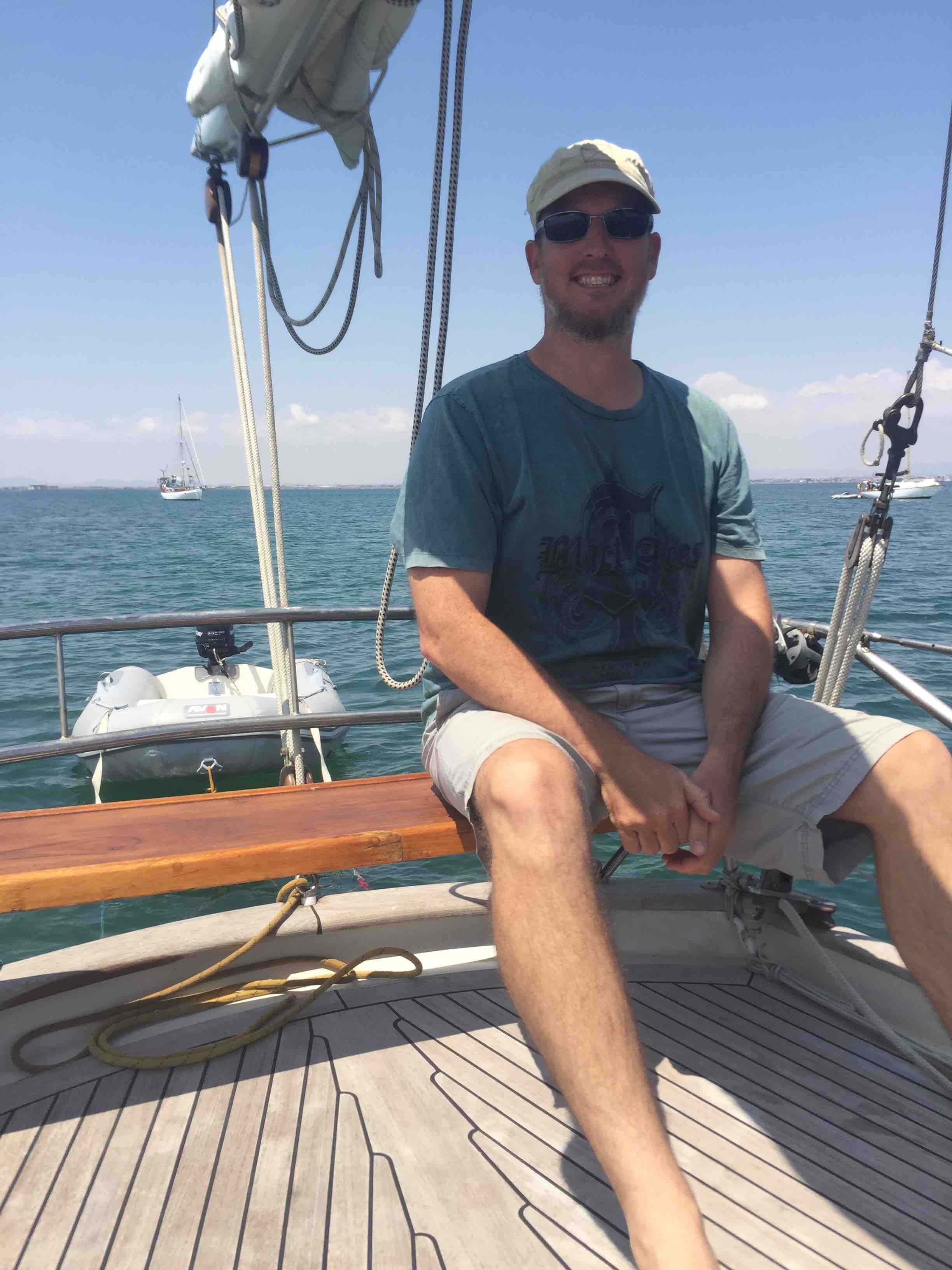 Best spot on the boat 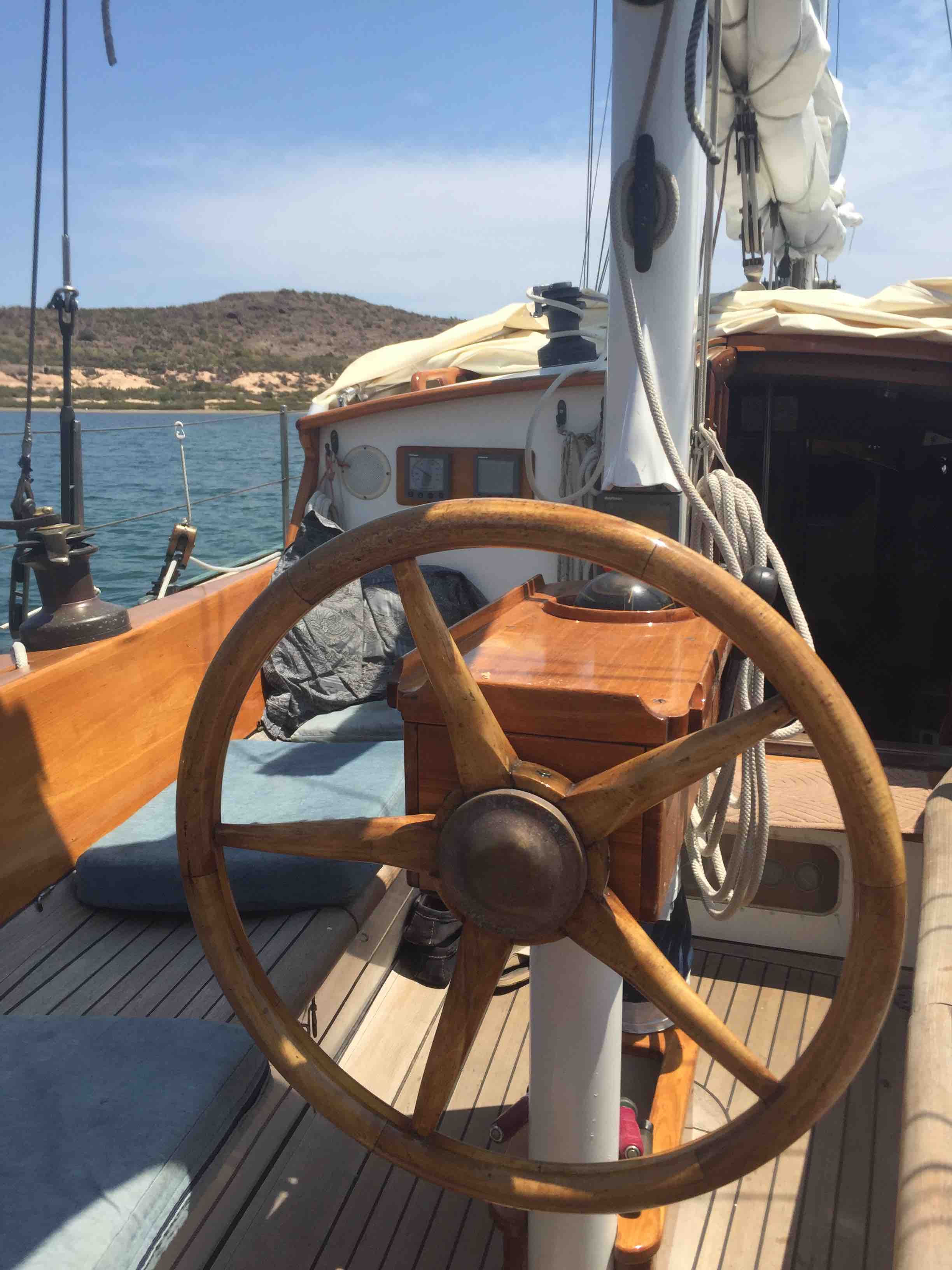 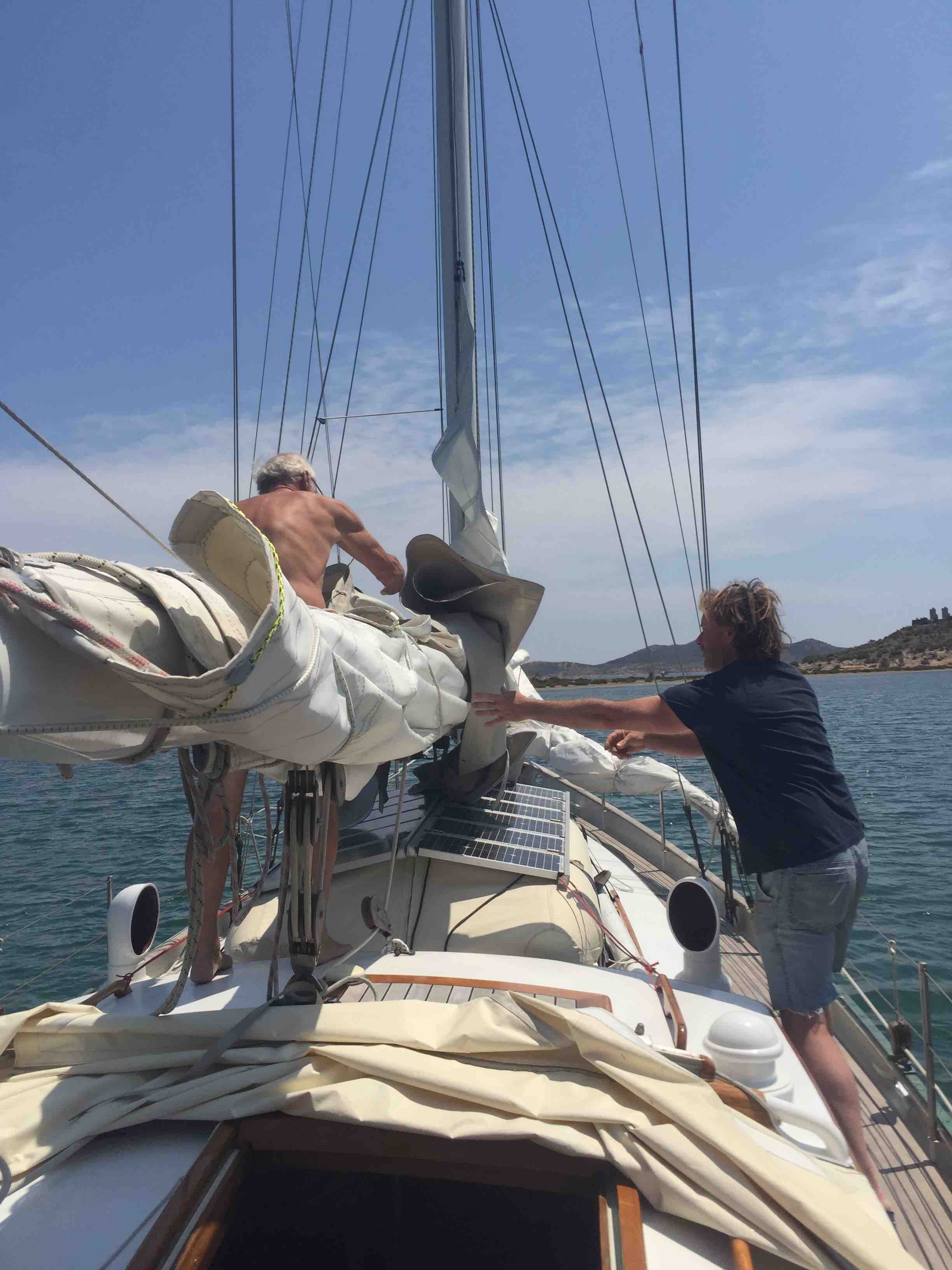 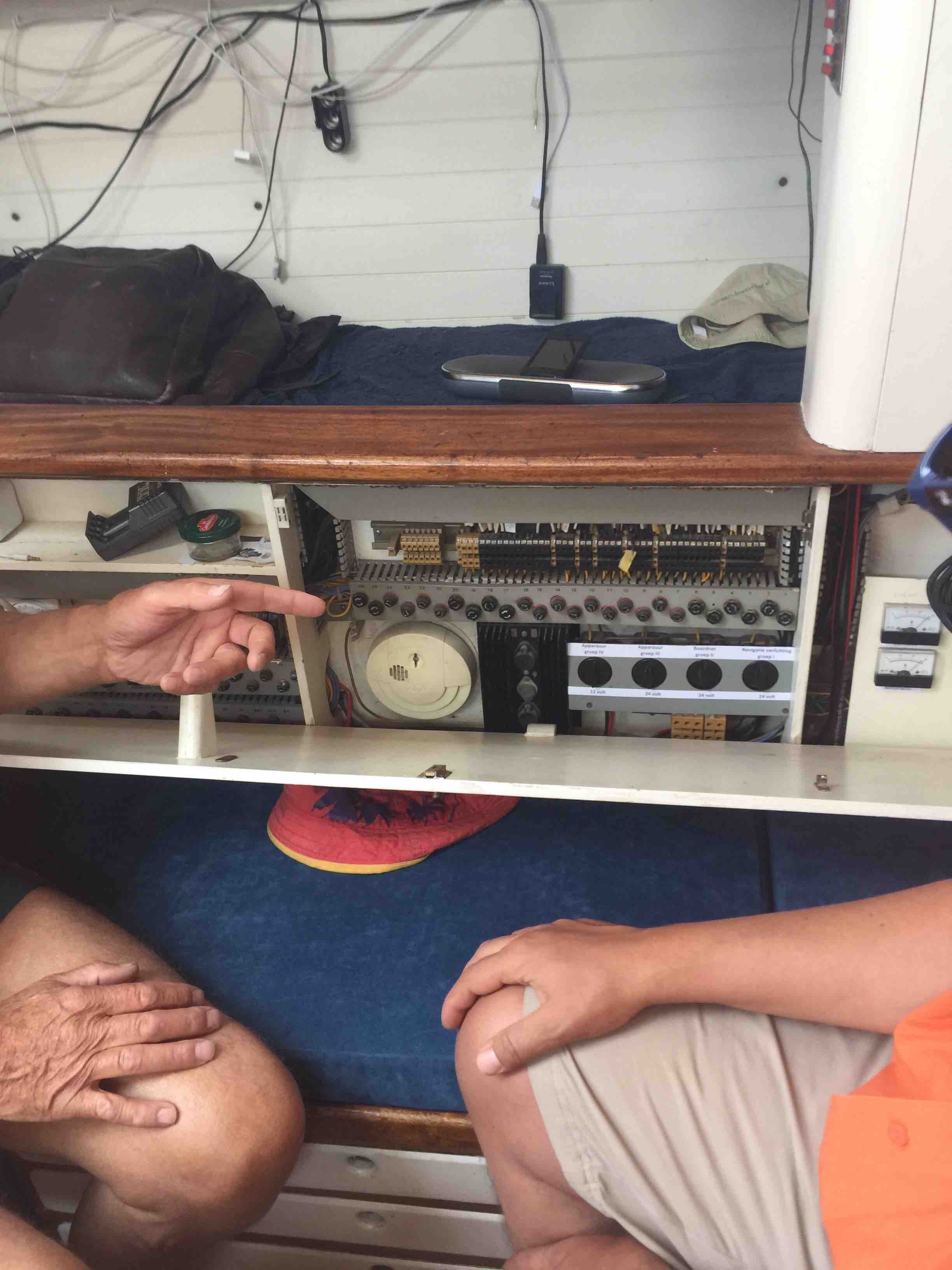 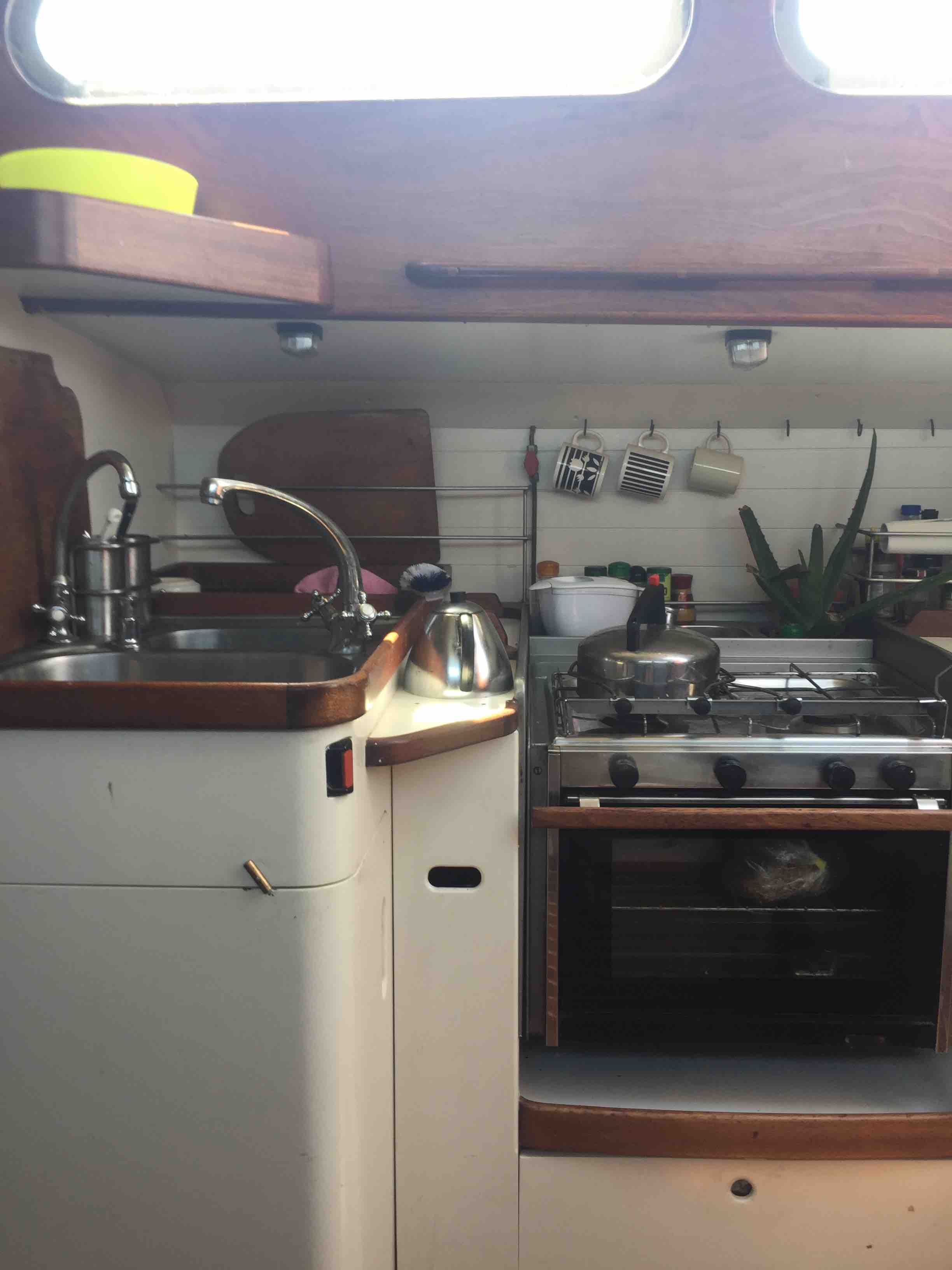 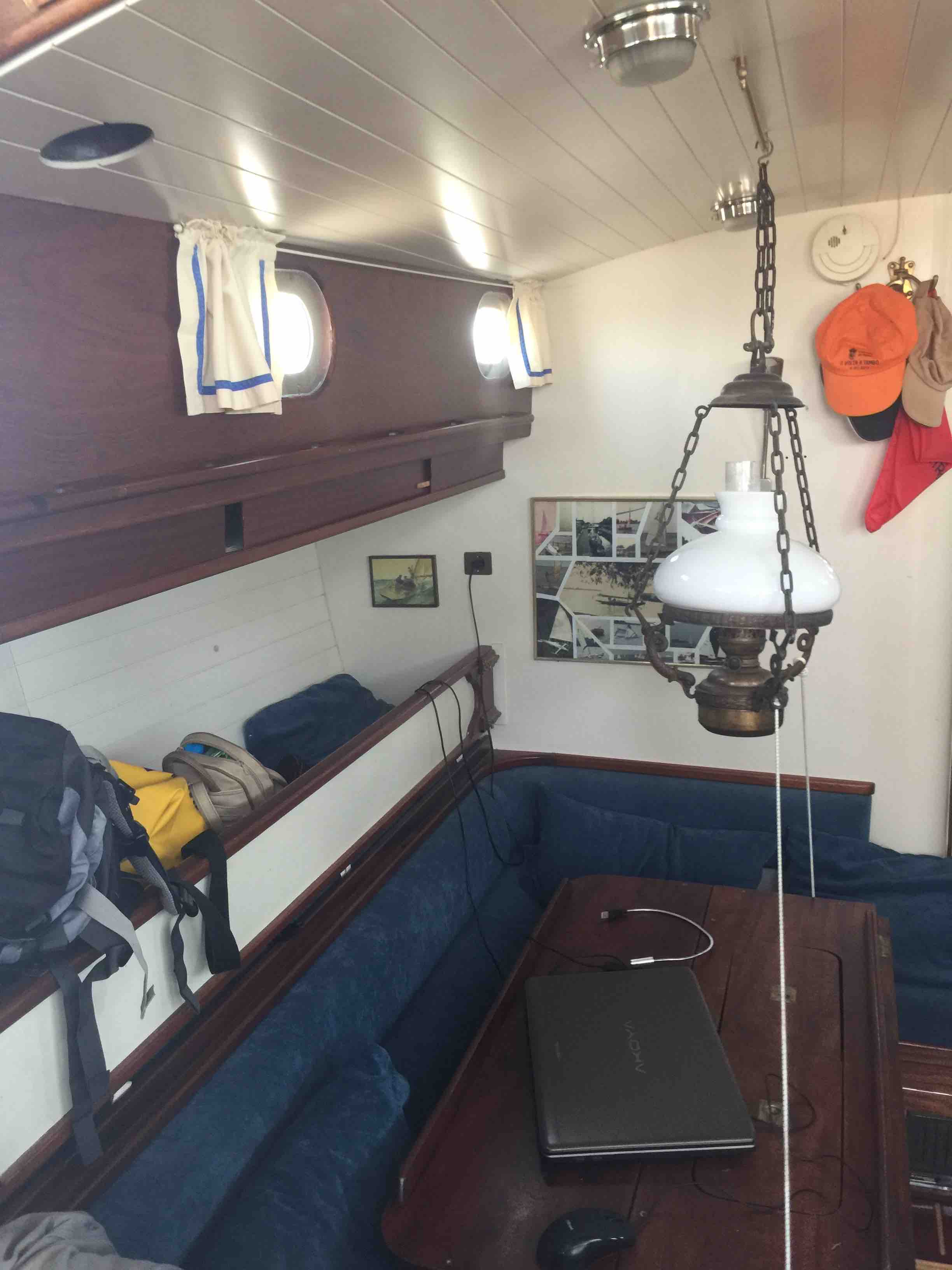 Stocking up and filling up

We anchored again and went ashore with the dinghy. There were some grocery shops nearby but we decided to head out a bit further to our favourite Spanish supermarket, the Mercadona. By the time we got back to the Witte Raaf, the sun already started to go down. The wind was nearly gone so we turned on the engine and headed back to our anchorage while we also started the preparations for dinner.

The day was finished by a late dinner with many glasses of wine and some cheeky Irish coffees for dessert.

4 Comments on “The White Raven, an authentic sailboat”