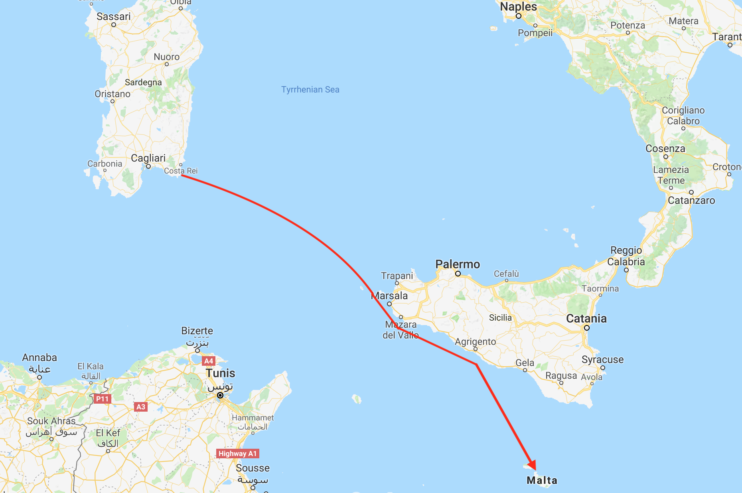 On Sunday the 26th of August there was still a lot of wind. We registered gusts of up to 30 knots and we had seen various inflatables come past that had been blown off the beach. The wind was supposed to ease off that day, and the next few days would be a suitable weather window for our second attempt to cross to Sicily.

The forecast for Monday was little wind but some left-over swell from the blow over the weekend. The swell was going to be on the beam (from the North, whereas we were going East) so we were hoping it wasn’t going to be too bad.

Vaare left first and set sail after a quick drive-by past Goodvibes. Wilma left shortly after and around 8am we also lifted our anchor. 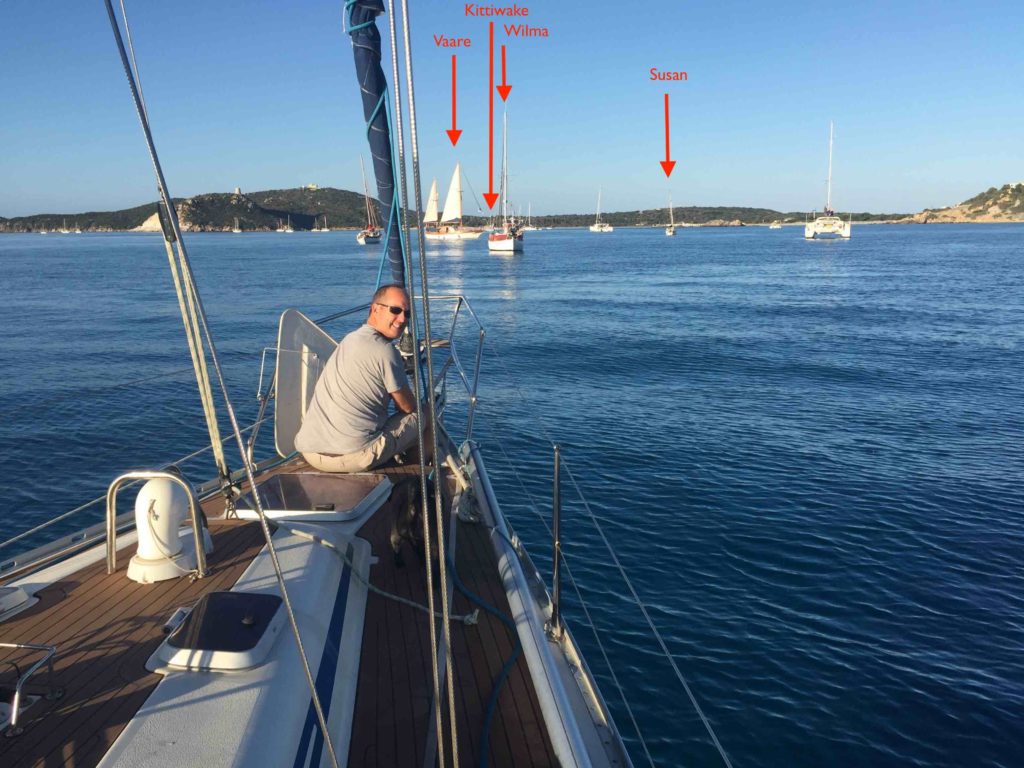 Leaving Simius in Sardinia. The last time we would be in the same place as our sailing buddies. (Susan and the Kittiwake crew stayed in Sardinia) 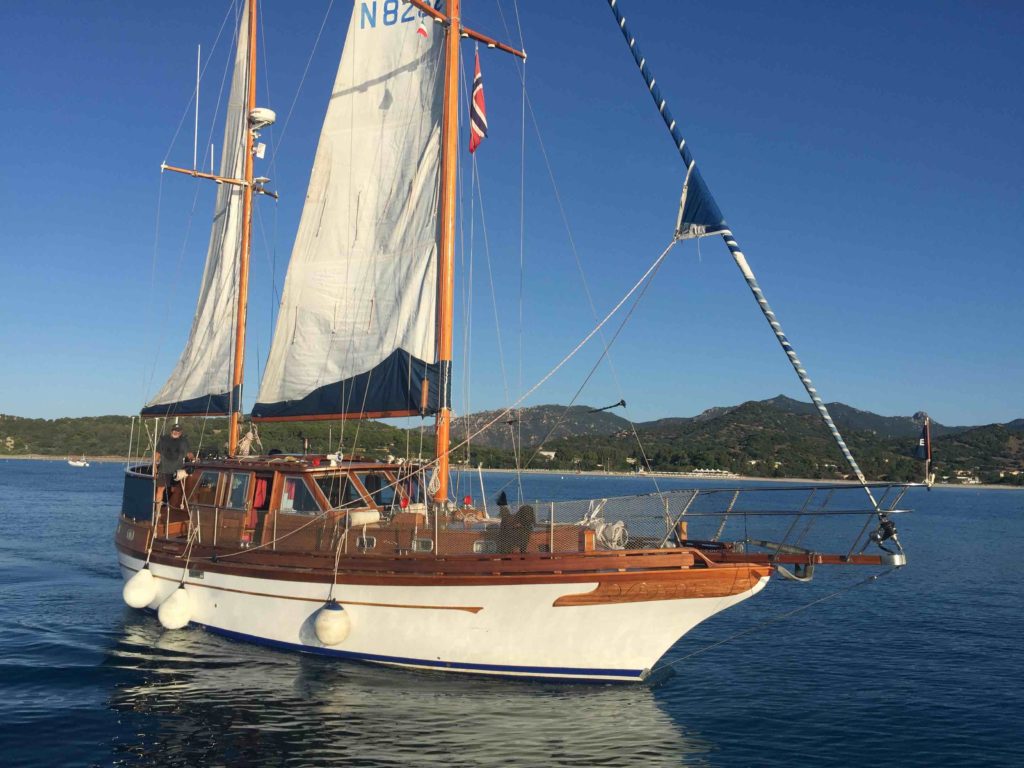 Goodbye Vaare! Perhaps we see each other next season. (Did you spot Birk on the bow?) 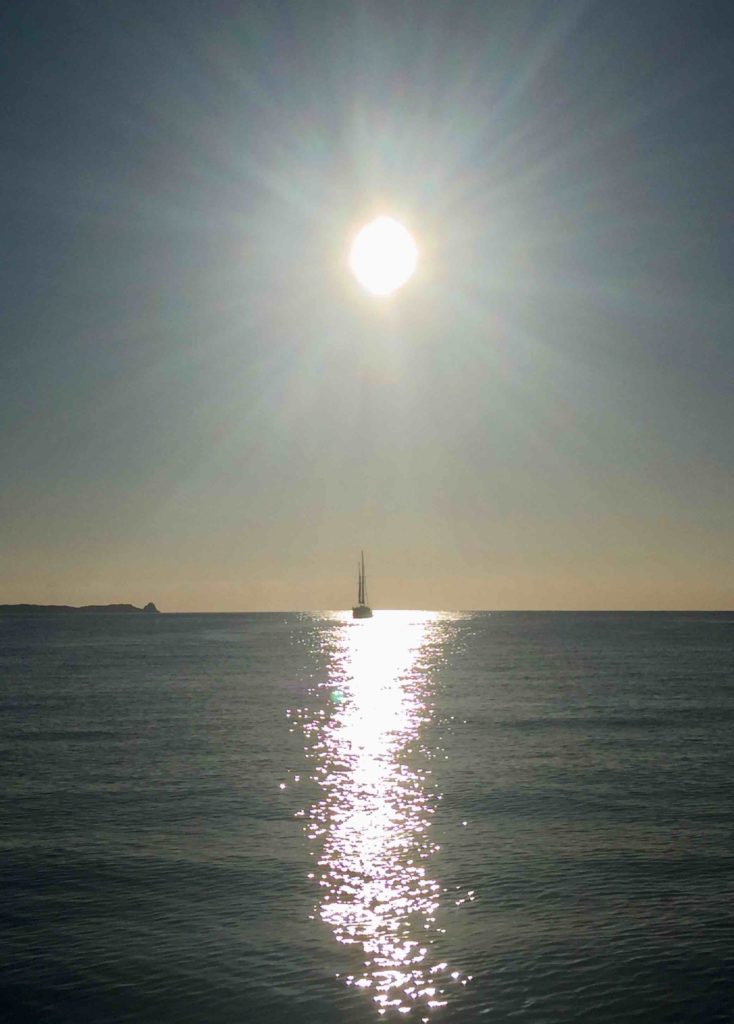 8am. Vaare is setting off due East.

Immediately we felt that something was not right: the boat was vibrating a lot more than normally with the engine on. This was not a good way to start a passage that would take at least 2 days and 1 night. So we turned around and dropped the anchor again to investigate the problem.

It did not feel like the engine was the problem, but rather the propeller. So Jon put on his swimming trunks and dove under the boat to investigate. Once down below it was pretty obvious to him what the problem was: one of the blades of our folding propeller was misaligned which meant the 3 blades were not symmetrical. He was able to manually jig the offending blade into place and the problem was solved. 45 minutes later we were on our way again.

As forecast, the winds were very light – 6 or 7 knots. Goodvibes can sail quite well in light winds so we turned off the engine and were sailing with a speed of 3.5 knots for a while. In the late afternoon the wind disappeared completely so it was time to turn on the engine. Unfortunately the vibrations were back. Time for the captain to make his first blue water dive, in the middle of the sea. He made sure he had tied a rope to the boat and, on the other end, around his weight belt. As we were only going at a speed of 1 knot it should not be too difficult to dive under the boat to realign the prop blades again. 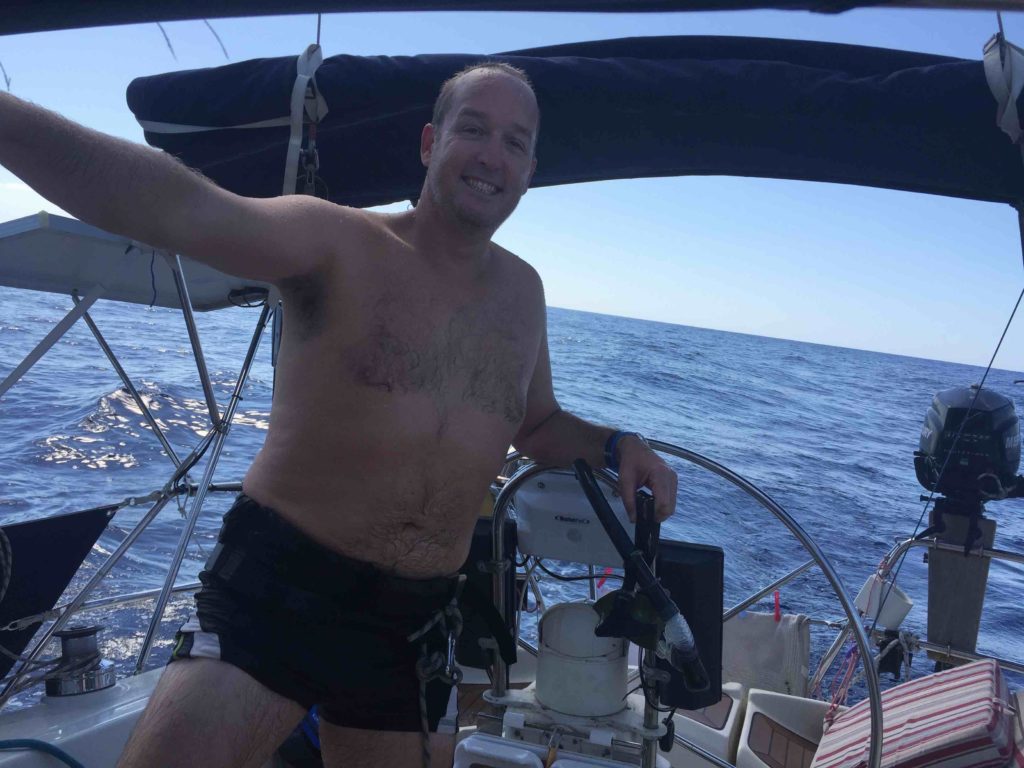 Very handy to have a captain who can fix things under the boat in the middle of the sea.

It took a few dives and I had to steer Goodvibes into the wind and waves to reduce the speed but he succeeded. From now on, we would only turn the engine off again if it looked like we could sail for a long time. As there was no bad weather forecast for at least a few days, we were not in a hurry so we could even sail at very low speed.

The first night at sea

Due to the swell on the side it had been a tiring day: our bodies had to constantly compensate for the sideways movement and walking around was a challenge, so we were physically quite exhausted.

I took the first watch from 9pm to midnight. When Jon took over, the windspeed had increased to over 10 knots so he could turn the engine off. We were sailing very nicely and the swell was gradually decreasing. We were slowly getting further and further away from Vaare and Wilma who had set course to the North-West of Sicily whereas we were aiming towards the South-West. The night was uneventful, as was the second day at sea. A few times we had to turn the engine on to top up the batteries or to increase our speed. Jon had found out that by putting the gear into reverse and forward a few times the blades would eventually align again so no more dives were necessary. 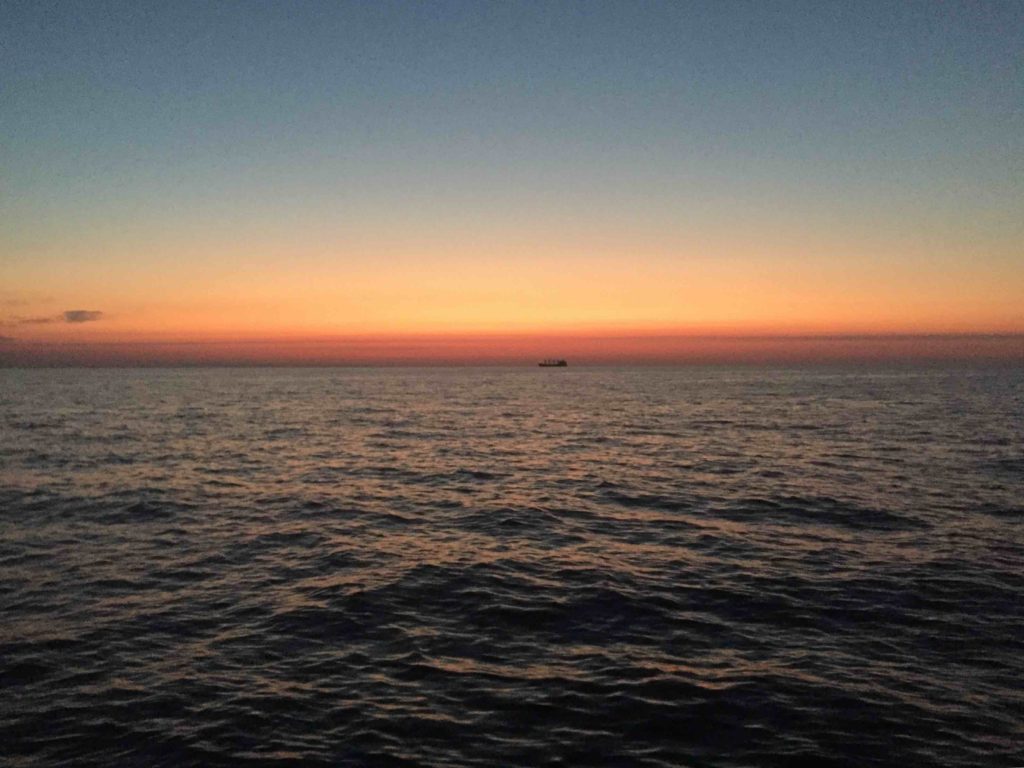 The sunrise is always very welcome after a long night at sea. Now you can see other ships instead of relying on AIS and (often confusing) lightsignals

In the evening of the second day at sea we were getting close to the Sicilian island of Marettimo. A little bit earlier we had been visited by a large pod of dolphins and we had also seen two turtles. Turtles are quite difficult to spot because they look like a wad of seaweed until you come close enough. The one turtle was waving at us with his front flipper so we were sure it wasn’t just some seagrass. 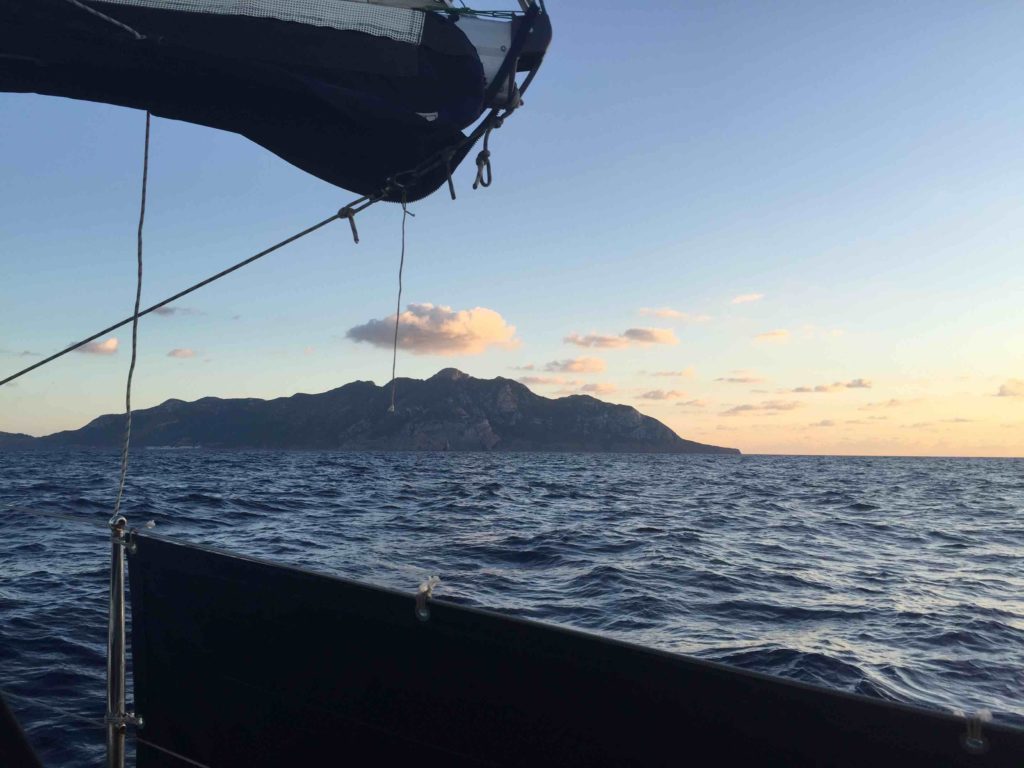 The Sicilian island Marettimo. The village (the white bit on the left of the island) looked quite pretty, maybe we can visit it some other time.

We had been sailing beautifully the whole day and we also had a chance to think about our options. Our plan had been to stop at an anchorage on the south coast of Sicily and then, in the following days, move east along the south coast until we reached Licata. From there it was only a daysail to Malta. However, as we were making good progress and we had no particular interest in going on land in the South of Sicily, we decided to push on and see how we felt the next day. 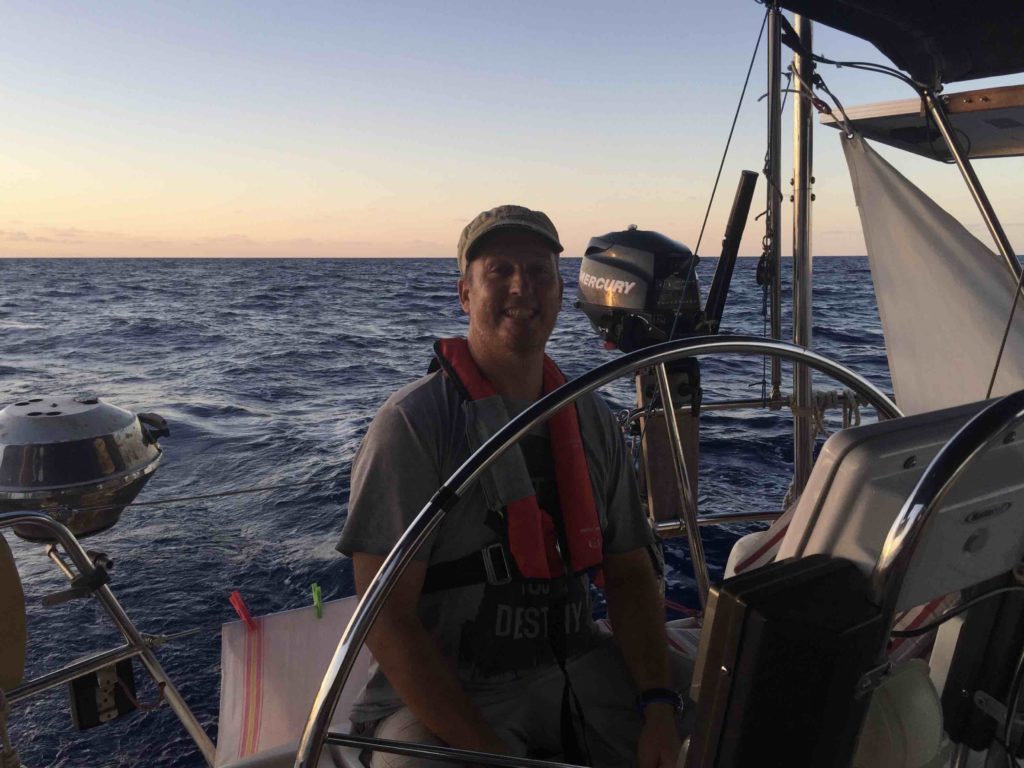 The second night at sea

At the start of my 9pm watch I suddenly heard an unusual sound. I looked over the railing and there were 6 or 7 dolphins playing around the boat. The moon had not yet risen but I could see them remarkably well as their lightly coloured bellies were clearly visible under the water surface. They stayed around for about 15 minutes – what a way to start the night.

Around 11pm, as we were only a few nautical miles out of the Sicilian shore, we were called on the VHF by Trapani Port Control. It’s always a bit disconcerting to be called by an authority, but fortunately they only wanted to ask if we had seen a flare earlier. We had not, and told them so. They probably had received a message of somebody seeing a flare and needed confirmation.

Around midnight our speed decreased to only a little bit more than 2 knots. A weird tide seemed to have come in which counteracted the wind and swell, which were in our favour. However, we were still gently going forward and the sails weren’t flapping so we left the engine off.

By now, our chart plotter was full of AIS targets – obviously the stretch of sea between Sicily and Malta is popular for cargo ships going from the East of the Mediterranean (Greece, Turkey, and even beyond Europe via the Suez canal) to the West (Spain, and the Strait of Gibraltar and beyond) and vice versa. It made the night watch certainly more interesting: nothing better to keep you on your toes than a 300 meter cargo ship on a collision course. 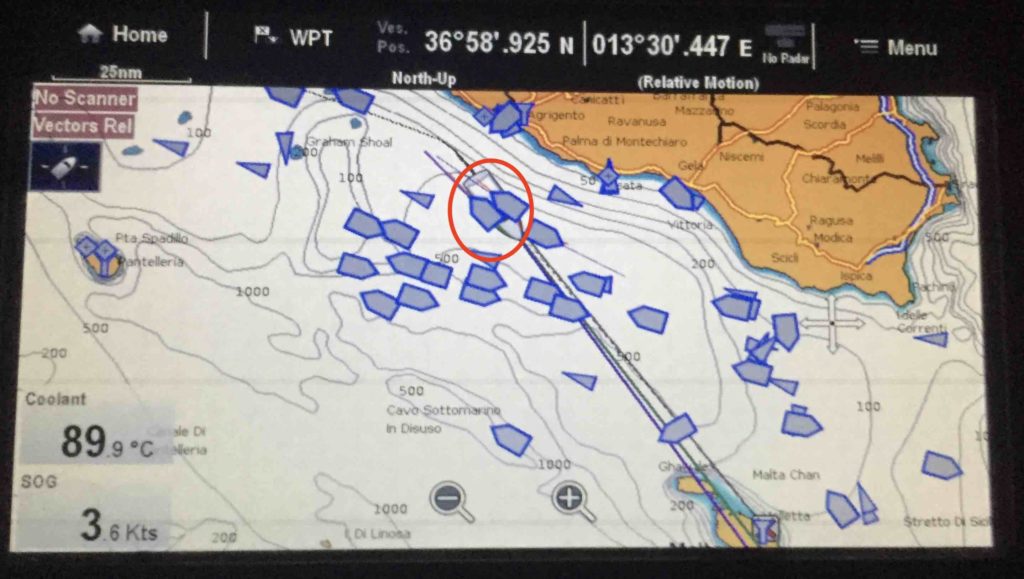 The red circle indicates our vessel. The scale is rather large which explains the 2 boats right on top of us.

Instead of following the South coast of Sicily all the way to Licata, we decided to head towards Malta sooner. It had been very useful to stay along the coast for a bit as we had been able to get 4G internet access. This allowed us to download the latest weather forecast. There was going to be little wind but at least that meant we could continue to take it easy. 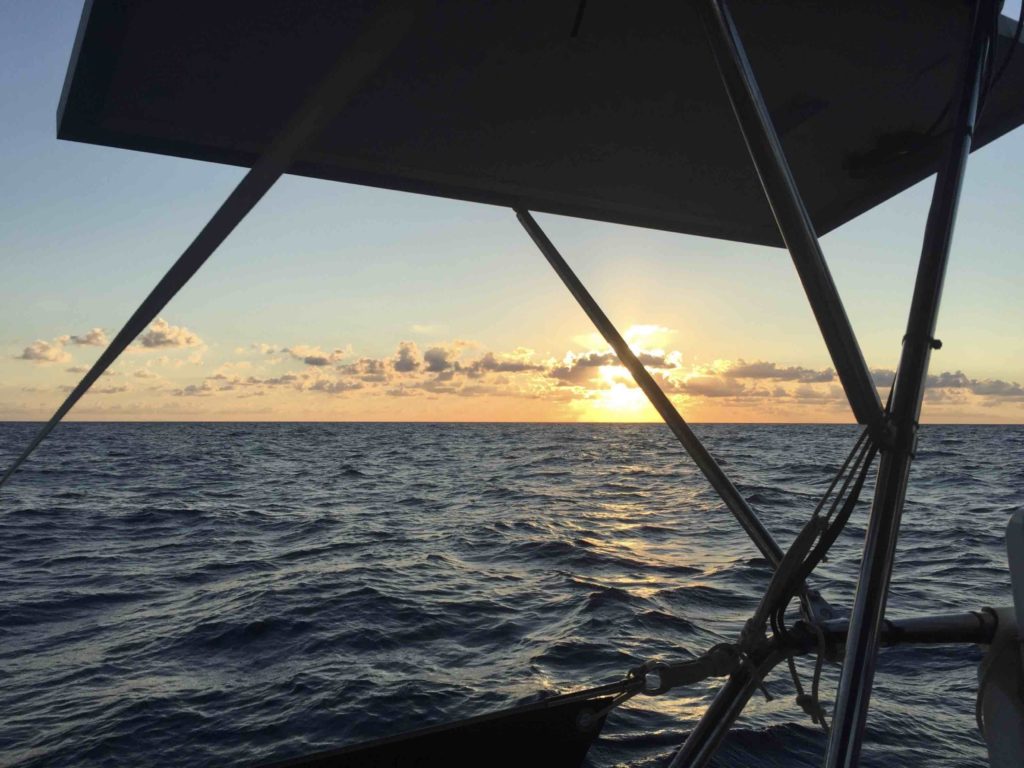 And before you know it the sun is setting again

By now we had fully settled into the passage routine and we had implemented the 3-hour watch schedule also for the daytime. Most of our time when not on watch was spent sleeping or napping. Then, of course, it was also necessary to make food and wash the dishes. Time takes on a different dimension when you are on a passage like this, especially because we did not have a scheduled arrival time (or even date). We simply kept going and only if speed fell below 2 knots did we turn on the engine. 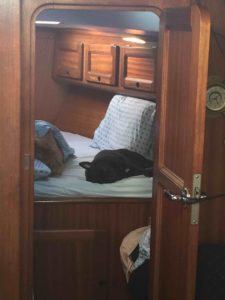 On passage puppy gets to join the ‘sleeper’ in the v-berth. 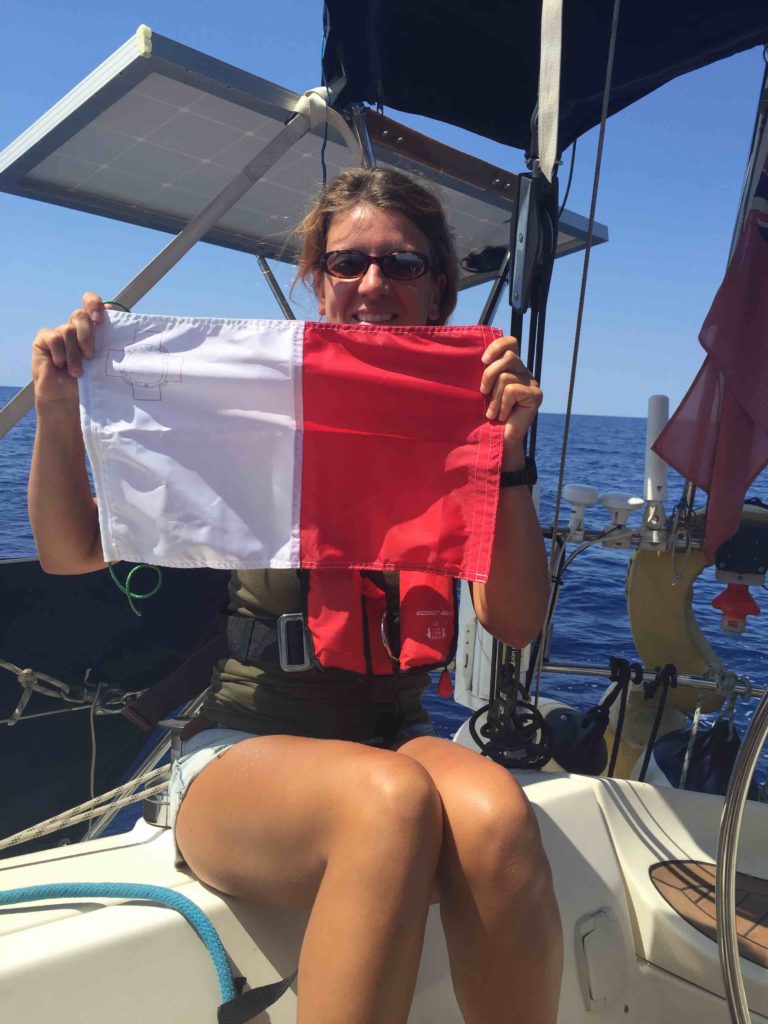 Around 3pm on the fourth day we arrived in Gozo, the northernmost island of Malta. The plan was to anchor just outside the marina in Mgarr, but on closer inspection it looked very small and the frequent ferries to the main island of Malta were giving a lot of swell.

We continued a little bit further. To the left of us we could see the famous Blue Lagoon on the island of Comino. It was very busy: many motorboats and tourist boats were continuously coming and going from this small lagoon with clear blue water. Definitely not the place for us to be; perhaps later in the season when it’s quieter.

Just a few hundred meters west of Mgarr marina we saw another sailboat at anchor in a shallow inlet. There was enough space for us and it was out of the way of the main traffic. We dropped the hook and poured ourselves a well-deserved glass of wine. No more long passages for us this season: we were going to cruise around Malta for a few weeks before settling into a marina in Valletta for the winter. 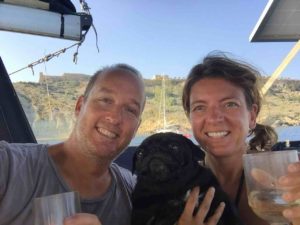 3 Comments on “Crossing by sailboat from Sardinia to Malta”