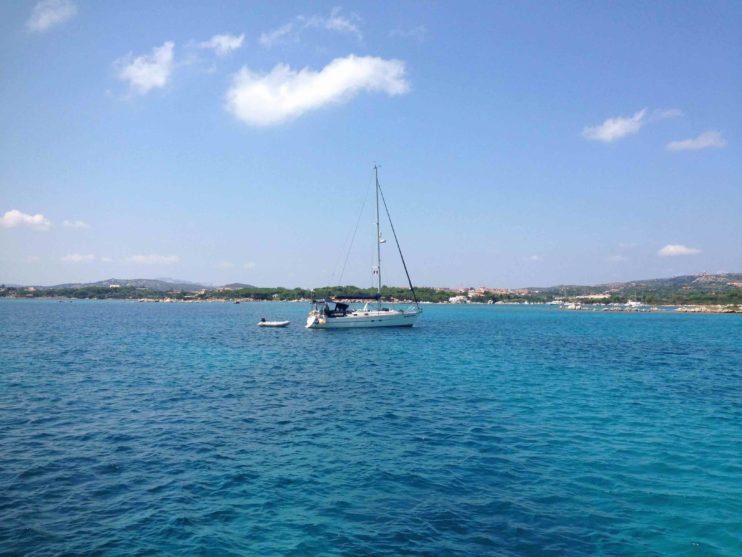 Even before we had bought the boat, we researched the Maddalenas. This island group in the northeast of Sardinia is, according to many cruisers, one of the best destinations in the Med. Clear blue water, shimmering sandy beaches – you get the picture. We could barely believe this kind of tropical beauty was to be found in Europe.

Fast forward 2 years and we are at a crossroad in Western Sardinia: we can chose to go South along the West coast (the shortest route to Sicily, our next stop after Sardinia) or go North past the Maddalenas. It would be a longer route but considering we had been dreaming of the Maddalenas for so long, it seemed a shame to not see it with our own eyes.

The 7 islands that make up the Maddalena archipelago are in a nature area. You are not allowed to  enter or anchor without a permit. It is very easy to buy this permit online. Even though there is a language selector on the site so you can get the information in English, it looks like the translator gave up halfway through, so half of the text is still in Italian. With the help of Google translate however you can still easily fill in the form. The main details that are required are id of the captain and registration details of the vessel. Instead of the registration number we entered the name of our boat. As this is clearly visible from the outside we thought that would save being asked for our registration number by the authorities. [We were right about this, we weren’t stopped or questioned by the official boats once, even though we same them checking other boats every day]

The permit costs €57 for a vessel of 11 meters, for 1 week. We have heard stories about cruisers without permit who were charged on the spot and had to pay a similar amount just for 24 hours. So it’s definitely worth getting the license sorted beforehand.

In the afternoon of Tuesday the 24th of July we left from Cannigione for a 4.5 hour sail to the north water between the two main islands Maddalena and Caprera. This large area contains various anchor locations and is reasonably sheltered. With a wind varying between 9 and 20 knots we had quite an entertaining sail.

Around 7 in the evening we arrived at the anchorage of our choice, just off Isola Giardonelli. There were two or three other sailboats but otherwise it was quiet. We had heard that the Maddalenas can get very busy in the height of summer so we were pleasantly surprised we had managed to find a space for the night. After scoping out the best spot (there were quite some underwater rocks to consider) we dropped the anchor in the sand. 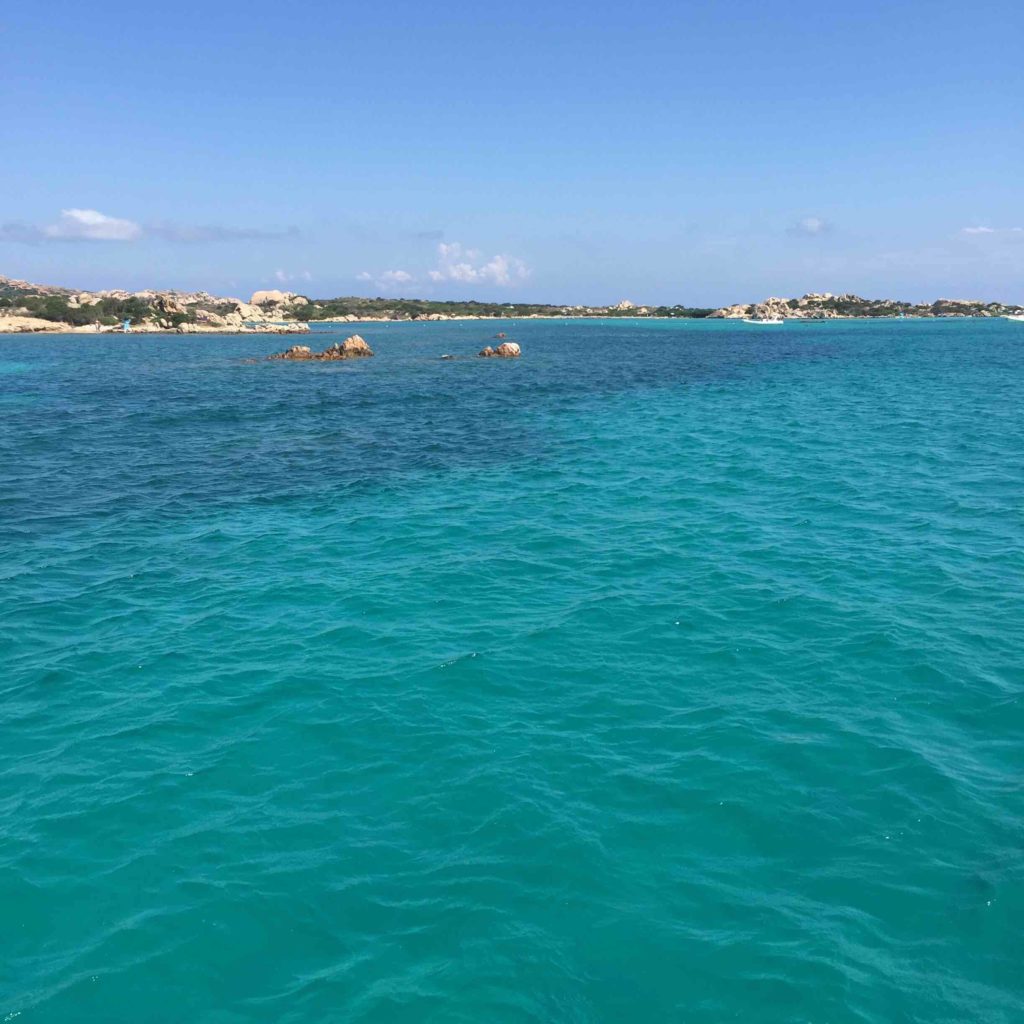 A quiet anchorage outside of peak hours

The next day we woke up around 9am by wake from passing motorboats. They didn’t slow down in passing Goodvibes to get as close to the beach as possible, and as a result we were swaying quite a lot. This continued until lunchtime. By then the quiet anchorage was filled to the brim with motoryachts, ribs and little motorboats. We knew they weren’t going to stay overnight so we were not too concerned about the large amount of traffic in such a small space. 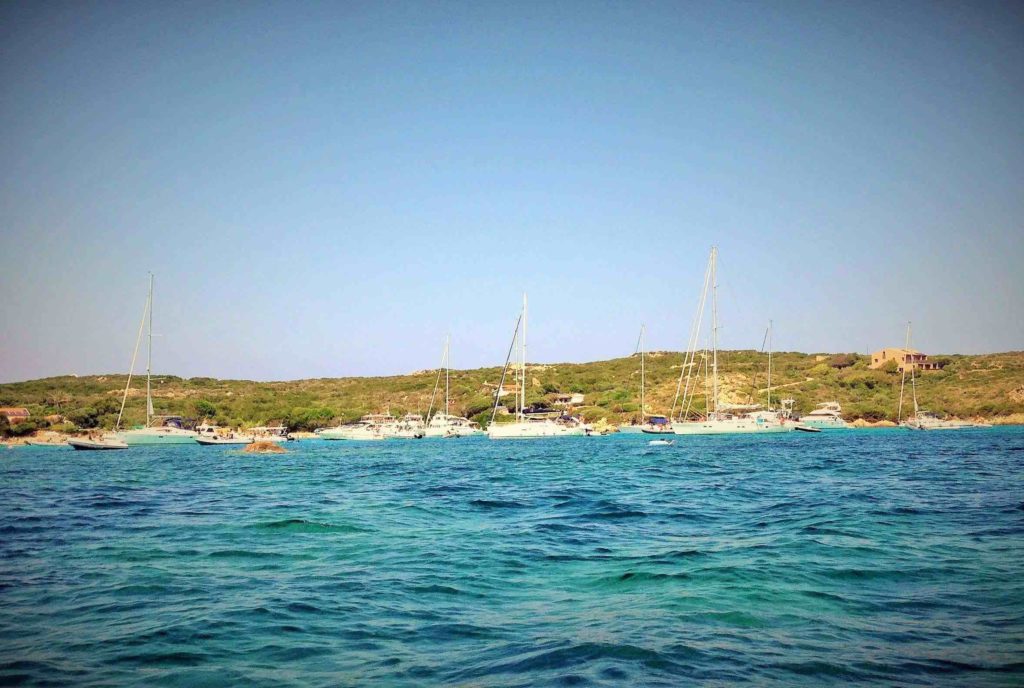 In the middle of the day anchorages are not so quiet anymore (disclaimer: not the same anchorage. Photo credit s/y Wilma)

This changed after our anchor got fouled by a super yacht. After untangling the chain and re-attaching our anchor we dropped the hook again in the same anchorage but we would be suspiciously eyeing every incoming motorboat from then on. 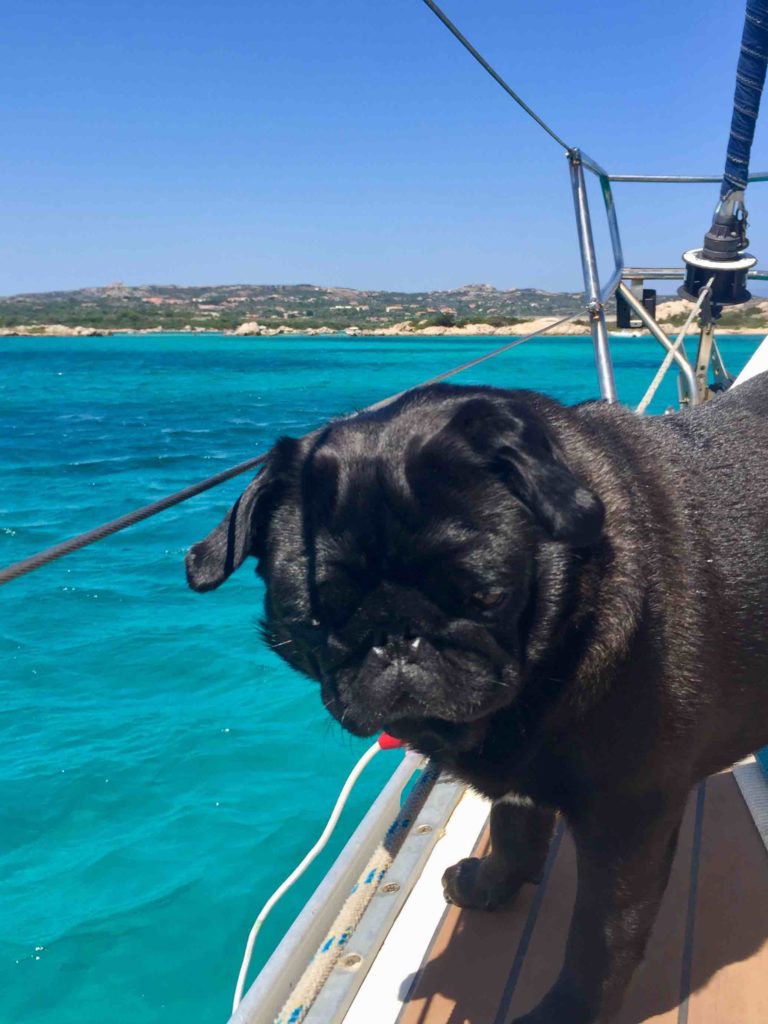 A visit to town

We were keen to visit Maddalena town, a few miles away on land. We tried to get as close to the town by dinghy as we saw possible. In the end we moored the dinghy in the corner of a small marina just south of the bridge that connects Maddalena island with Caprera island.

According to Google maps it was only 3 kilometers to town. However, after 45 minutes walking in the burning afternoon soon we were still not close to the town center. All we had seen were soulless apartment blocks and a lot of trash on the side of the road. Most of the buildings were ex-military and the presence of a military academy re-enforced the feeling that this was not exactly an upmarket residential suburb. 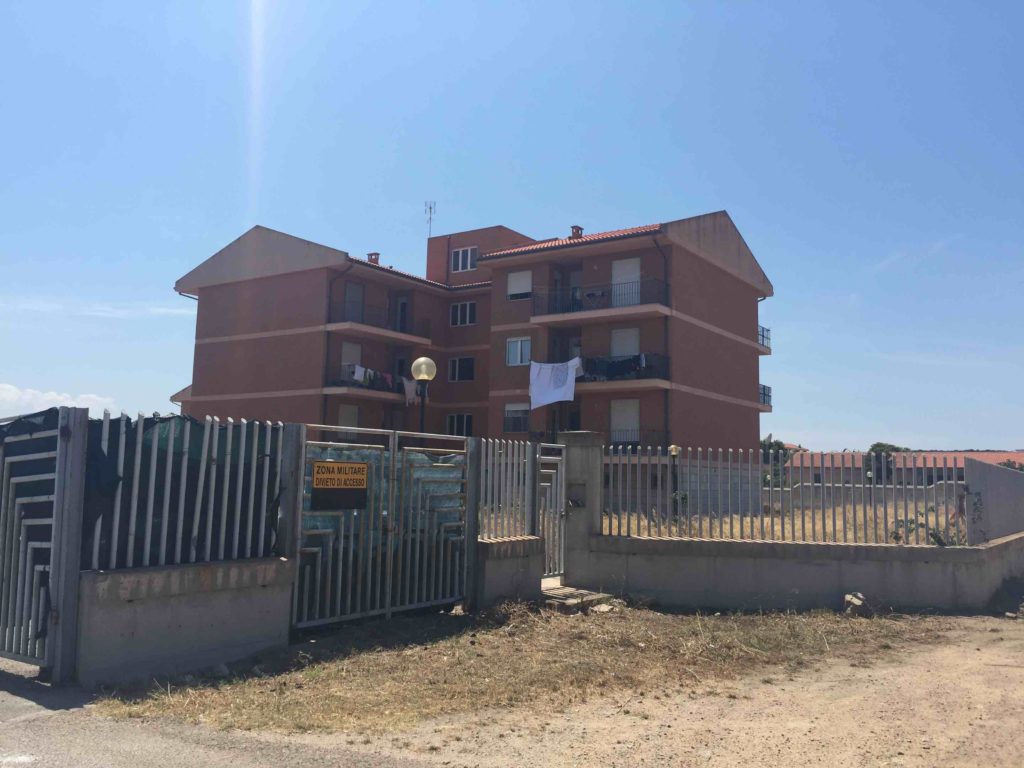 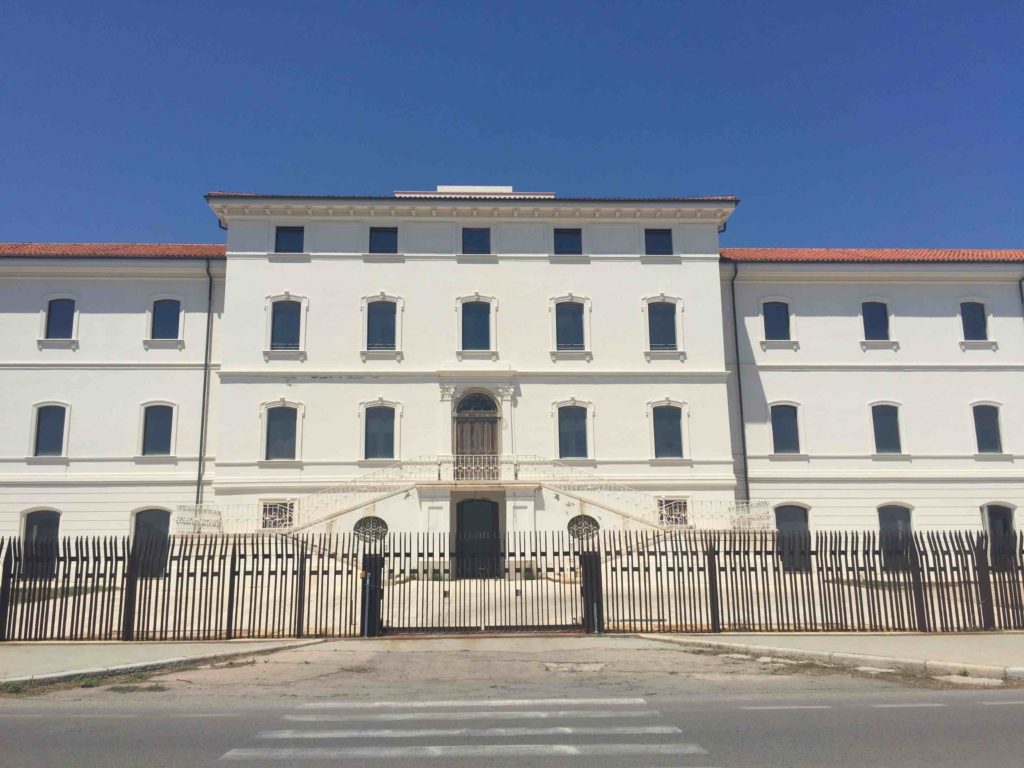 Finally, after about an hour’s walk, we arrived in the town. The shopping streets were quite pretty with a lot of knick-knack shops with prettily decorated window displays and artisan gelaterias. We had a frozen yoghurt ice-cream and a coffee and refreshed we headed to the supermarket. After getting some essentials, we were in no mood to walk back for an hour with heavy shopping bags so decided to get a taxi. There was no taxi-rank in sight but a local selling boattrips to tourists was friendly enough to call one for us. It cost €15 – not cheap, but worth it to avoid another walk through the uninspiring outer parts of Maddalena town. 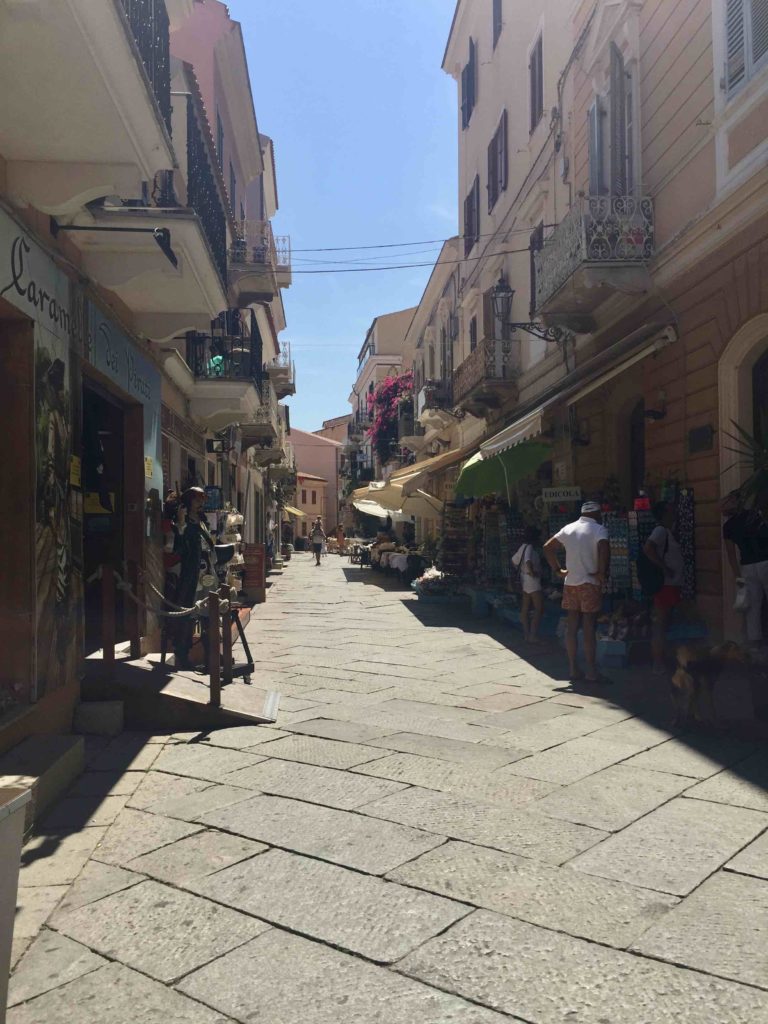 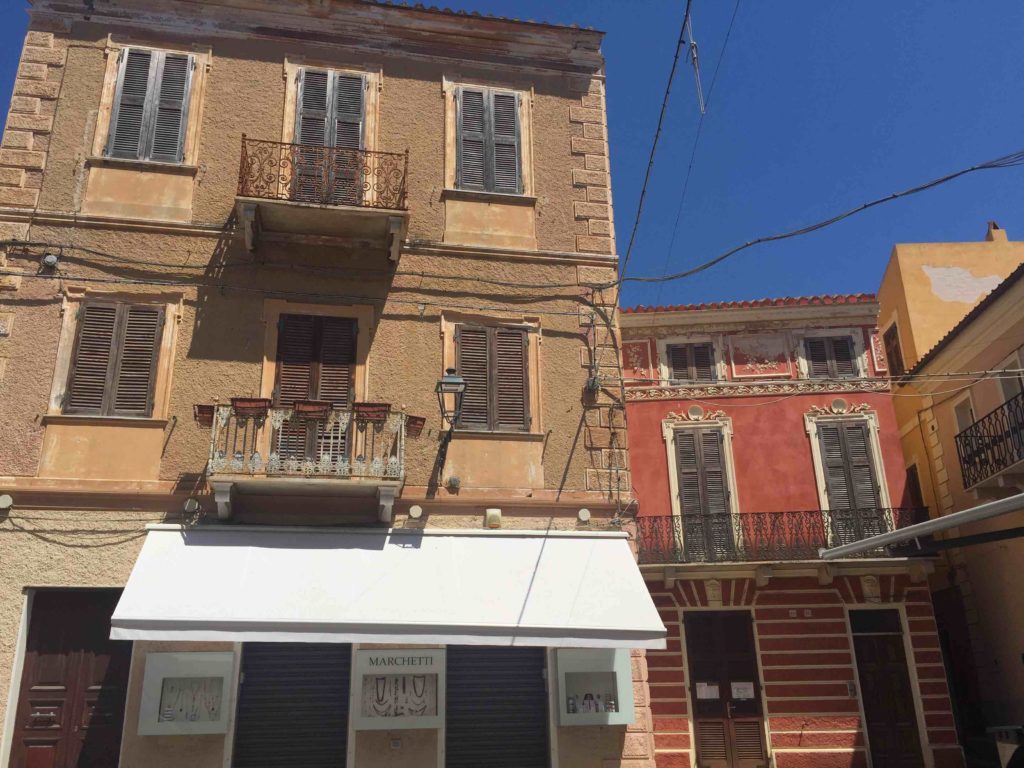 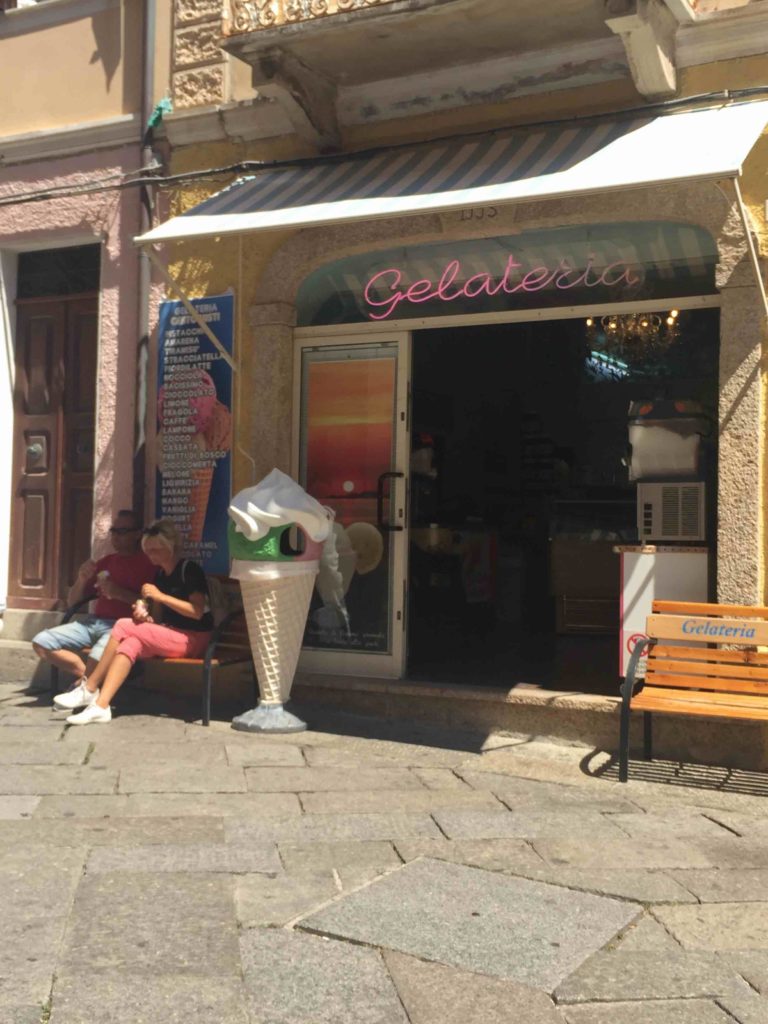 You don’t have to search long for a gelateria

Right behind us was the bay of Garibaldi. It looked a bit small and crowded for anchoring but it was close enough to explore by dinghy. Together with Wilma we zipped across to go snorkelling. We tried to moor the dinghy but we were immediately shooed of by an official looking guard. So we went a bit further and threw the dinghy anchor out instead. The waters were very clear and the bottom was mostly sand so the visibility was great. Unfortunately there wasn’t much interesting wildlife apart from some small fish. Still, the rocky shores made for an interesting dive. 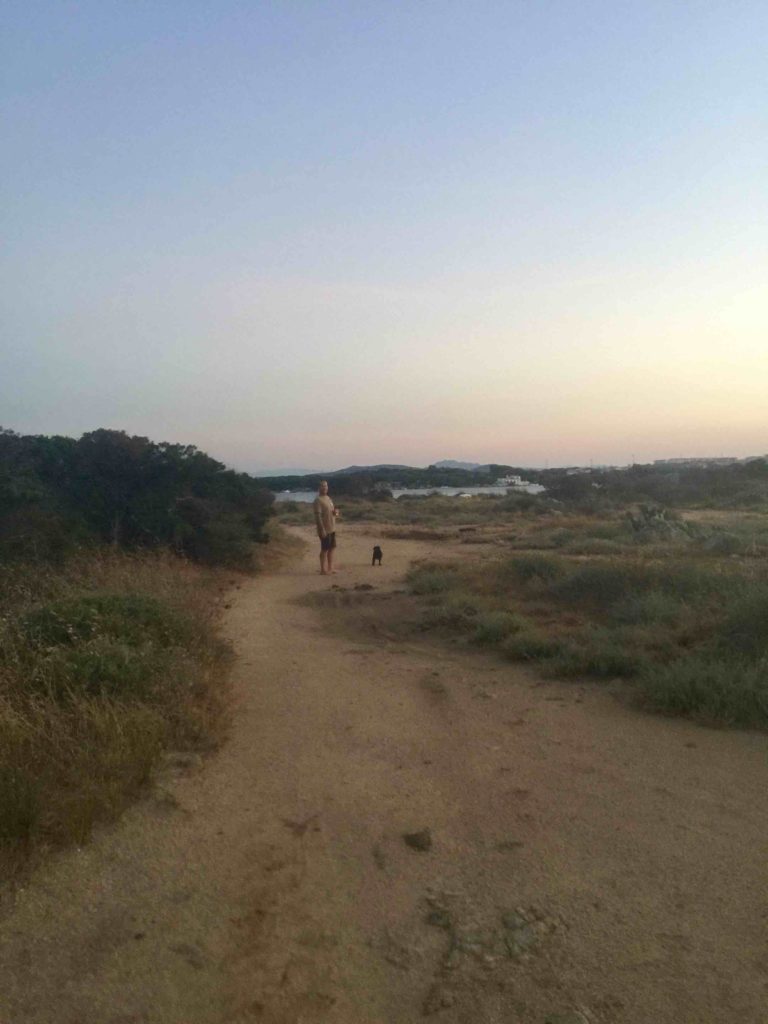 Ashore in the evening

On Friday the 27th we went ashore in the evening to view the lunar eclipse. Both Wilma and Goodvibes brought some delicious salads and treats for our picnic in the moonlight. We had a superb spot: the moon was rising right opposite our little beach. There were no other people and we could let puppy run around without having to worry about her. 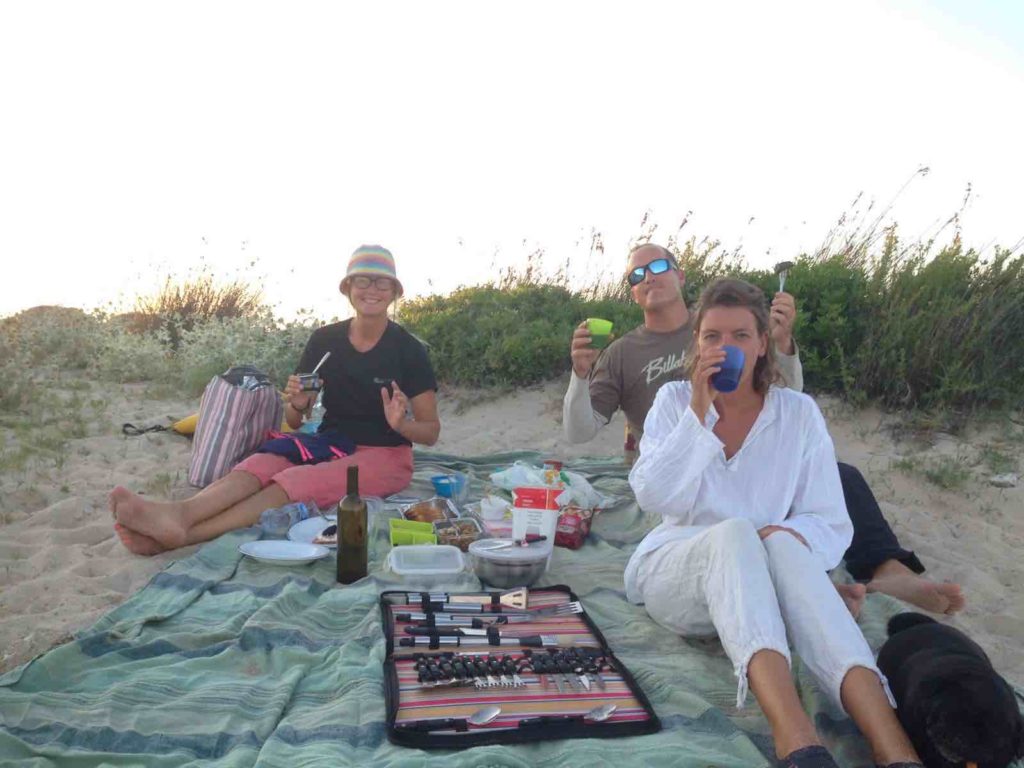 Getting our bellies filled before the moon spectacle takes place

First Mars rose in the evening sky. Then the moon very clearly became smaller and smaller until it became blood-red. It was pretty impressive and we couldn’t have asked for a better location to watch the eclipse. In nature, without light pollution and with our floating homes in the foreground.

Back to the mainland

By now, already more than half of our permitted time in the Maddalenas had passed. Ideally we would move on to another island for a change of scenery. However, we were a bit nervous about re-anchoring as we now had a damaged chain and we were afraid that other anchorages (most of them a lot smaller than our current one) would be even busier than our current one. Another issue was that there was consistently a heavy breeze from the west, especially in the afternoon, thanks to the funnelling effect of the Strait of Bonifacio. All other islands of the archipelago were west of us, so that would mean sailing into the wind to get there. ‘There’ also having to be a place with shelter from the west so we would be able to sleep and not get too much swell.

What we had seen of the main islands so far had been enough: we were keen to get back to Cannigione to get our new anchor chain ordered. So we headed back on Sunday, 1 night before our license expired. Thanks to the never failing Westerlies we sailed all the way back. The engine only had to be turned on briefly to lift and drop the anchor. 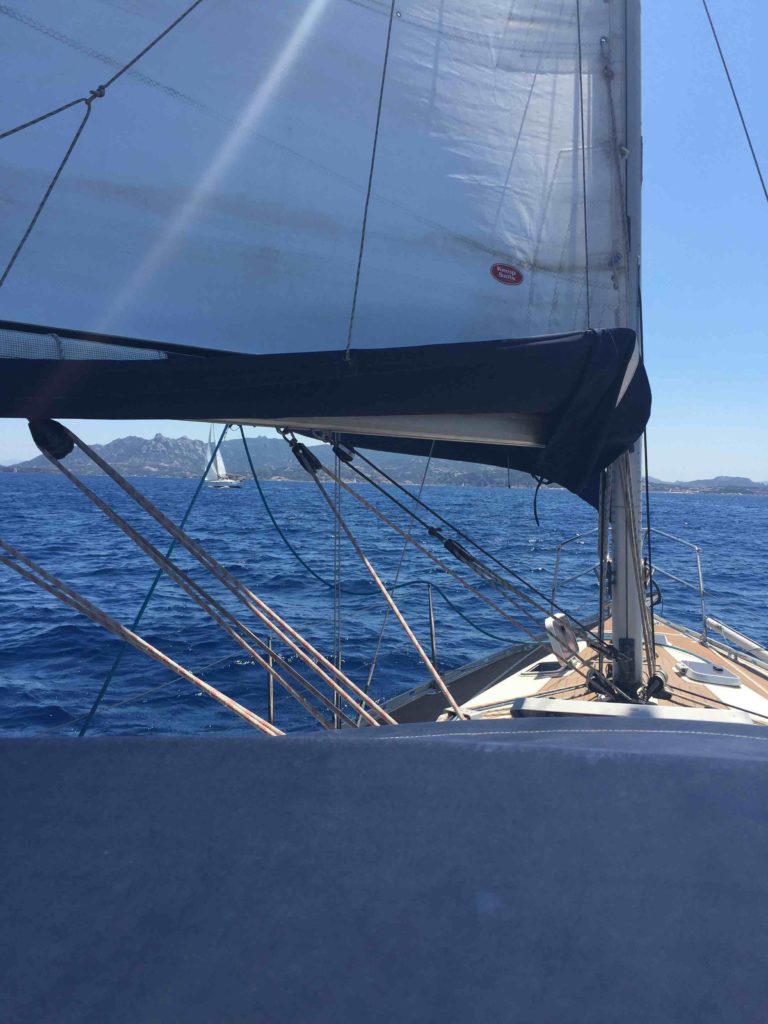 Broad reach sailing back to the mainland

Overall, we were quite disappointed with the Maddalenas. Of course, our run in with the motoryacht didn’t help us warm to the place. But even before that happened, we were not overwhelmed by what we saw.

Considering visitors have to pay to enter the park, you would have thought they would put that money to good use and at least reduce the amount of rubbish along the roads. The town we visited was not impressive, neither was the wildlife under water. Sure some of the beaches and the water are picture perfect, however, we have seen equally or even more beautiful places in the Balearics.

The biggest problem are really the daytrippers. In July and August most of southern Europe is on holiday and it seems that a lot of those people chose to go to the Maddalenas. The commercial tourboats push their way in to anchorages to get as close to the beach as possible with very little consideration for other boats. They put too little anchor chain out which means they drag and in general they anchor too close to other boats. Add to this big superyachts which need to be dodged and generate a lot of swell, and you can see how it’s not exactly a peaceful place. 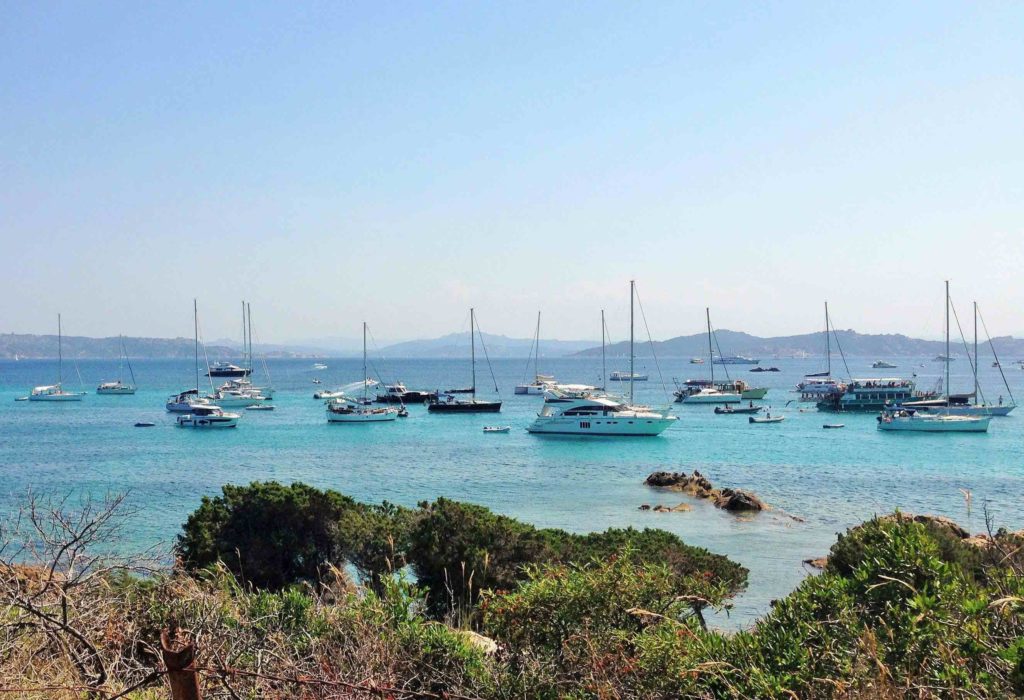 If you are planning to visit the Maddalenas in the spring or the autumn you most likely have the opportunity to visit some of the smaller anchorages and your experience may be different to ours. But for us, the Maddalenas was a disappointment. Still, we have no regrets. Even a bad experience is an experience nonetheless and at least we can cross the Maddalenas of our list of places to visit.