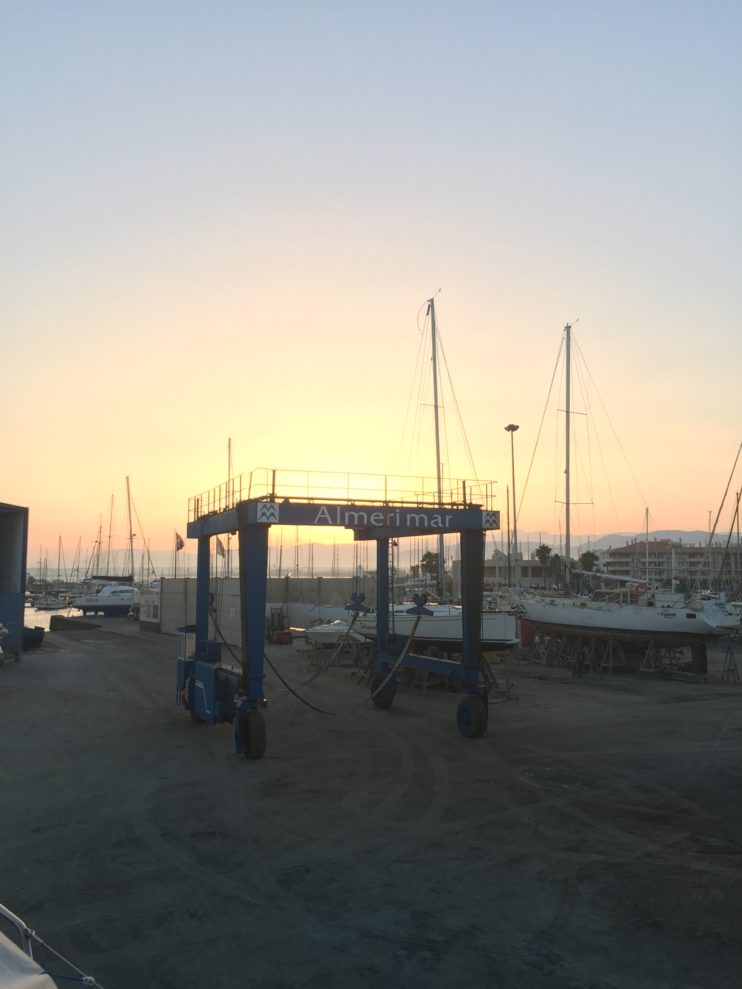 Arriving in Almerimar was a big milestone as we had planned to use the marina haul out facilities in order to address some jobs below the waterline. We had no real idea of what it would be like ‘living on the hard’ and how much time the jobs were going to take. So we were quite pleased when we arrived on Thursday 22 June that the marina office was going to try their best to get us hauled out the next day. That being a Friday, it meant that we would have the whole weekend to get used to the new environment and prepare for the work that needed to be done. 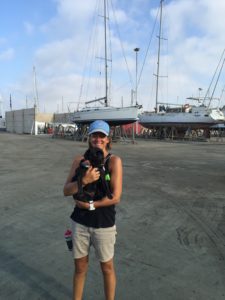 The office had told us to get to the boatyard on Friday at 8 am and follow the instructions of the staff there. We moored the boat next to the space where they haul out and entered a little space marked ‘office’. It turned out that this was not the boatyard office, but a little shop with boat maintenance materials. However, it was useful that we wandered in there because the owner was able to provide us with a lot of information about which products to use. He was also able to get in touch with a mechanic who might be able to have a look at our engine. Even though it seemed to behave fine and stayed at a constant temperature, the smoke from the exhaust was still white which did indicate something wasn’t happy. Even just for our peace of mind it would be great to discuss this with an expert.

By the time we left the shop, the boatyard personnel had just finished putting a boat back into the water and they indicated that they could haul us out next. And just like that, it was all action stations go: attach some lines to port side, so they could pull us along. Oh no wait, just put the engine on as that will be easier, and move the lines to the stern for manoeuvring when in the slings. In between, Jon managed to drop his (new) sunglasses in the water ánd retrieve them again through some ninja reflexes with the boathook. 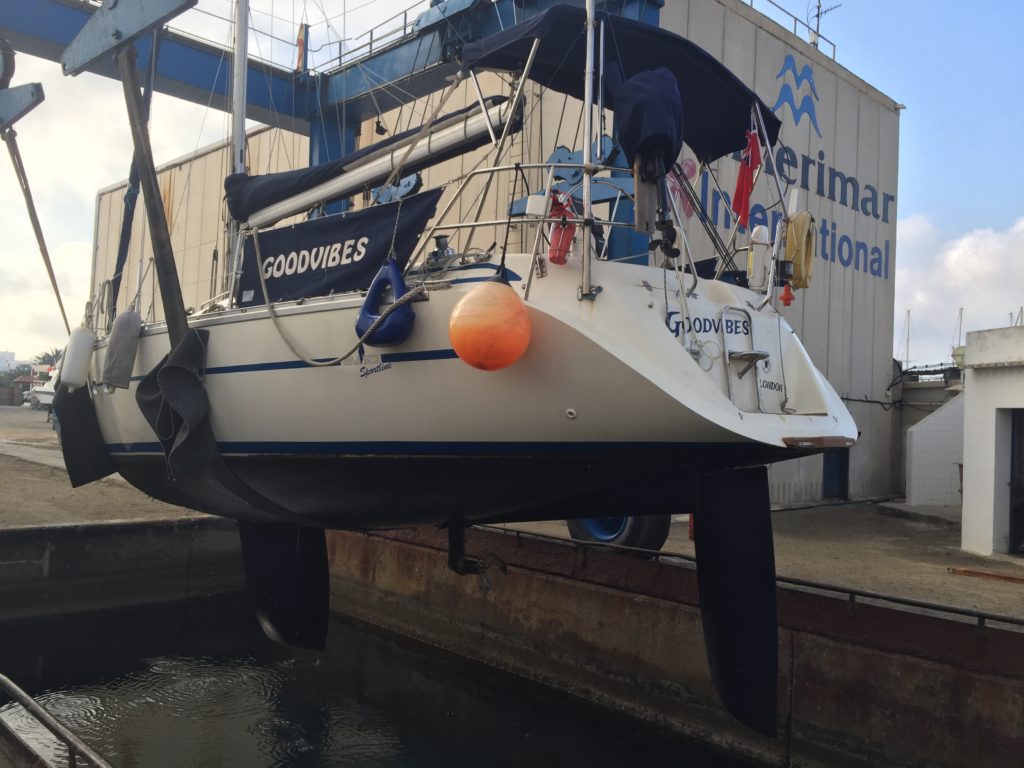 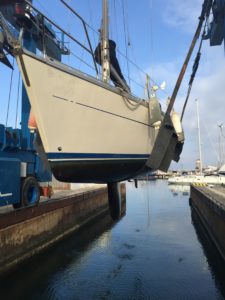 The crane that they use to lift up the boat has two slings which go underneath the hull. Obviously you don’t want the slings to be on your rudder or propellor. One of the workman asked us where exactly our propellor and sail drive was located so they could fit the slings around it. Hmm, we did not know exactly. He said that normally there are some markers on the outside of the hull to indicate the location for the slings. We couldn’t find any. But luckily the crane driver, who was located on the other – starboard – side of the hull, said he could see some markers. And yes, two little triangles just below the toerail seemed to be exactly what they were looking for. Good to know for next time!

We got off the boat and they started lifting her up. They kept a really close eye on all sides and the hull and all in all it was a very quick process. They then drove Goodvibes to a free space in the boatyard and proceeded with propping her up on wooden stands. The moment they lowered the slings (so she stood on the keel, balanced by the stands on the sides) was a little bit terrifying but we needn’t have worried as she stayed perfectly upright. Our nerves were going to be tested a lot more over the next few days as the wind picked up to close to 30 knots. 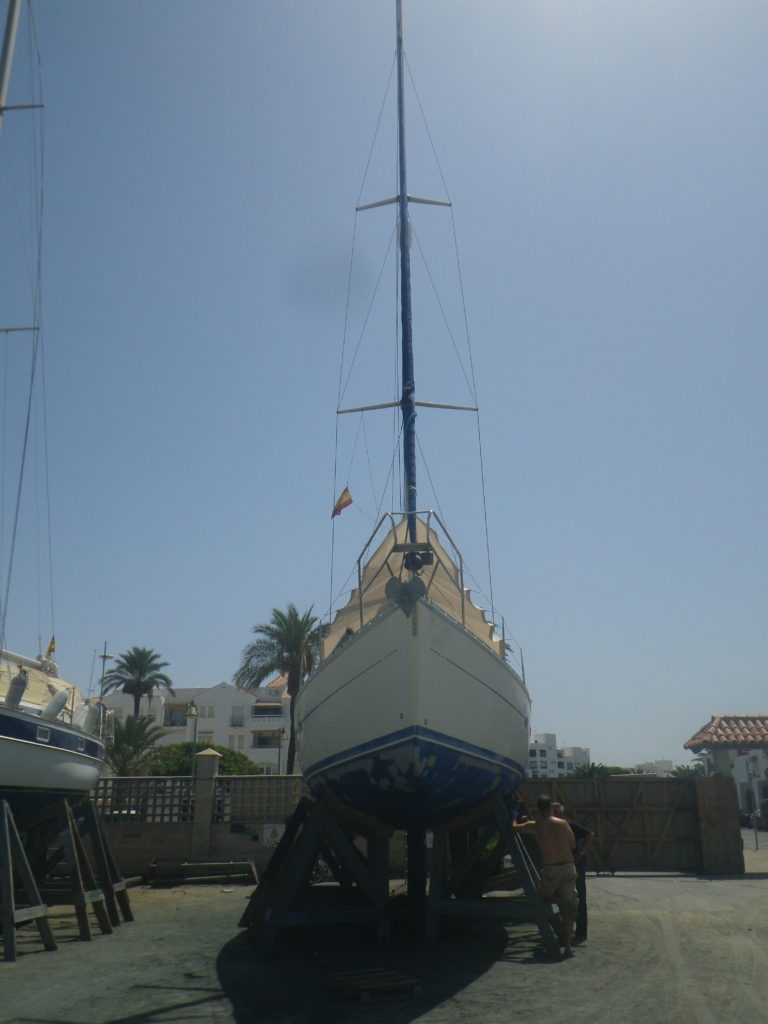 Living in the boatyard

We stayed on the hard for 10 days. There are a few big differences with being in the water, but once you get used to those, it is not very uncomfortable.

We hadn’t considered the fact that the fridge is water cooled via a heat exchanger on the hull. When out of the water, this could overheat and damage the fridge. Jon came up with a threefold solution: 1. direct a small spray mist of water on the heat exchanger in order to keep it cool. 2. fill some boxes in the fridge with ice. 3. turn the compressor speed down to its lowest setting. 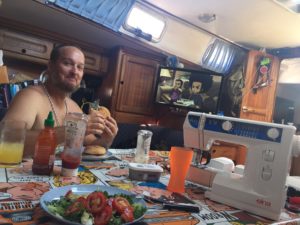 Time for lunch (and some tv) in between jobs

Actually, it was more of a fourfold solution, because we also simply ate all the perishables (meat,cheese) as soon as possible and after that we only kept items in the fridge that would not require constant refrigeration (juices, condiments, beers). As there was a supermarket near by I could every day buy fresh ingredients for that day.

When at sea, the toilet empties straight into the water. We do also have a holding tank but tend not to use it as we usually have marina facilities close by. Fortunately this was no exception and the facilities were located right next to us so it was literally 10 meters to get there. Of course you do have to get off the boat first, which is not such a pleasant thing in the middle of the night. Which brings us to…

Getting on and off the boat

With Goodvibes standing on her keel, the platform at the stern of the boat was about 2 meters above ground. The boatyard has ladders available to put up to the stern in order to get on and off your boat. Perfectly doable but still you want to be careful, especially when carrying the puppy on one arm when it’s time for walkies. 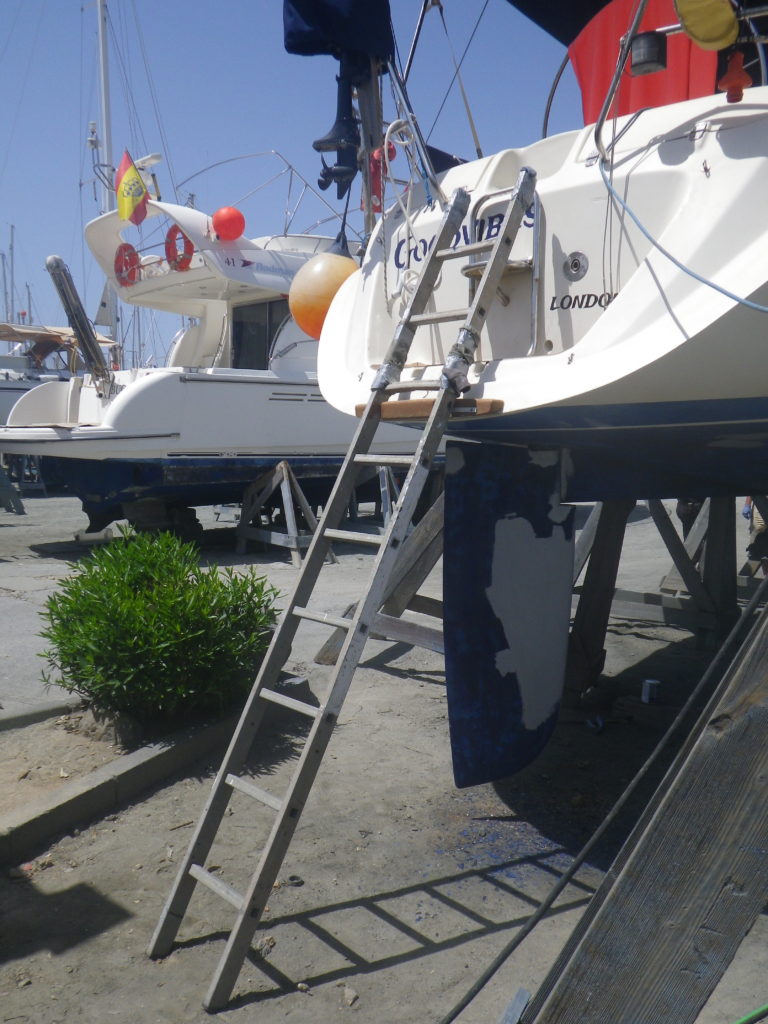 The deck was about 3 meters above ground: getting on the boat and walking around it was a bit scary the first time, but you soon get used to it.

The sink in the galley also goes straight into the sea, or when on the hard: straight on the floor below. We used water very sparingly (which is a good practise anyway) and used the sinks and showers in the toilets of the yard as much as possible. It was not allowed to wash clothes or dishes there, but we did use them a lot for washing hands. Considering…

This was on one of the first days. It only got worse

A boatyard is a messy place. The floor is mainly sand combined with years of paint flakes and who knows what other kind of chemicals. Pretty soon we realised we should not climb on board with our shoes (ok, flip flops) on, because it would bring too much dirt in the boat. In any case, your feet get really, really, really filthy. Even washing them in the shower did not remove the dark layer of dirt.

We still had access to water and electricity, and apart from the angle (the floor inside was at a 5 degree slope) and the fact that the boat didn’t move, it wasn’t that different from being moored in a marina. 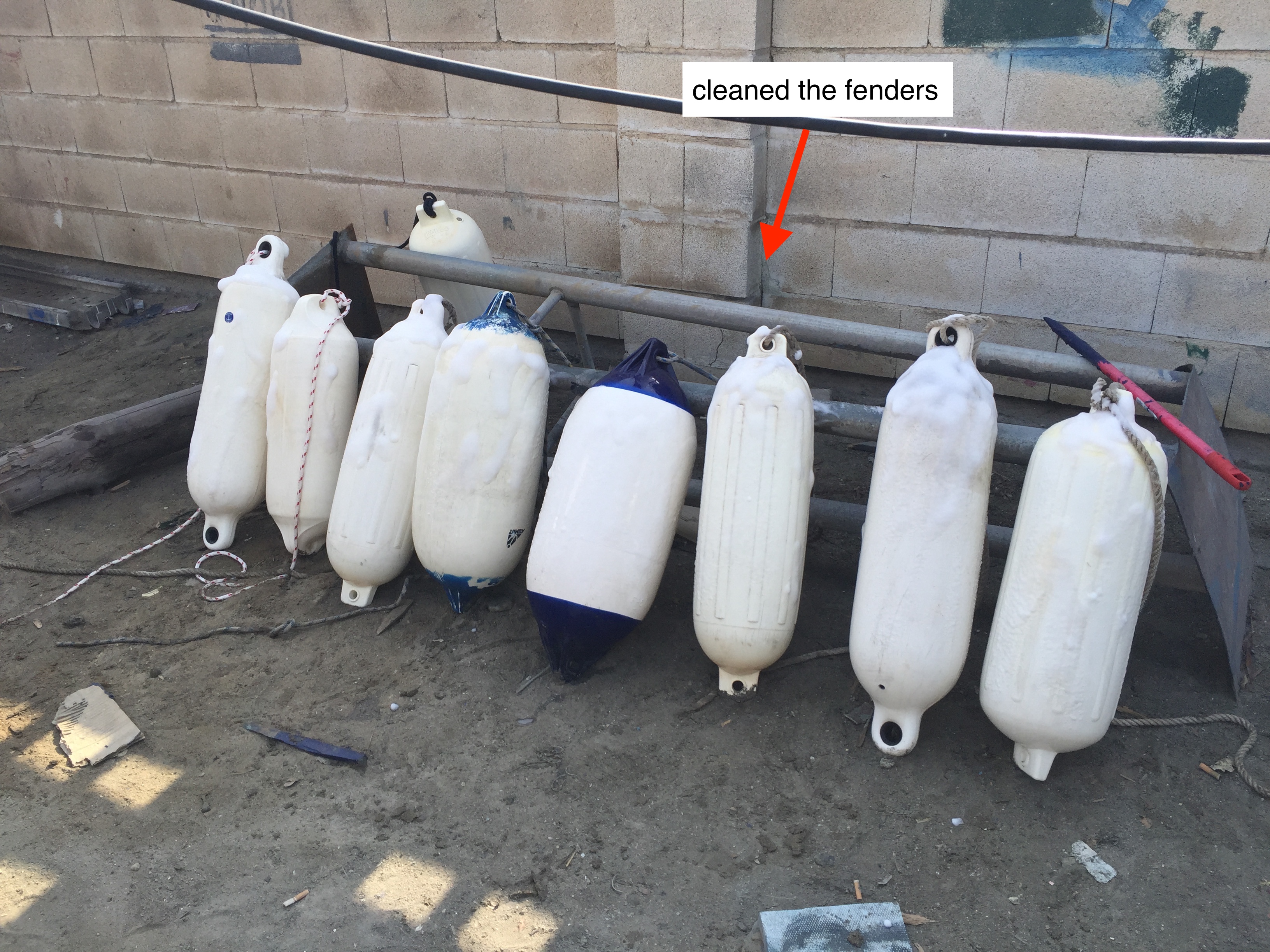 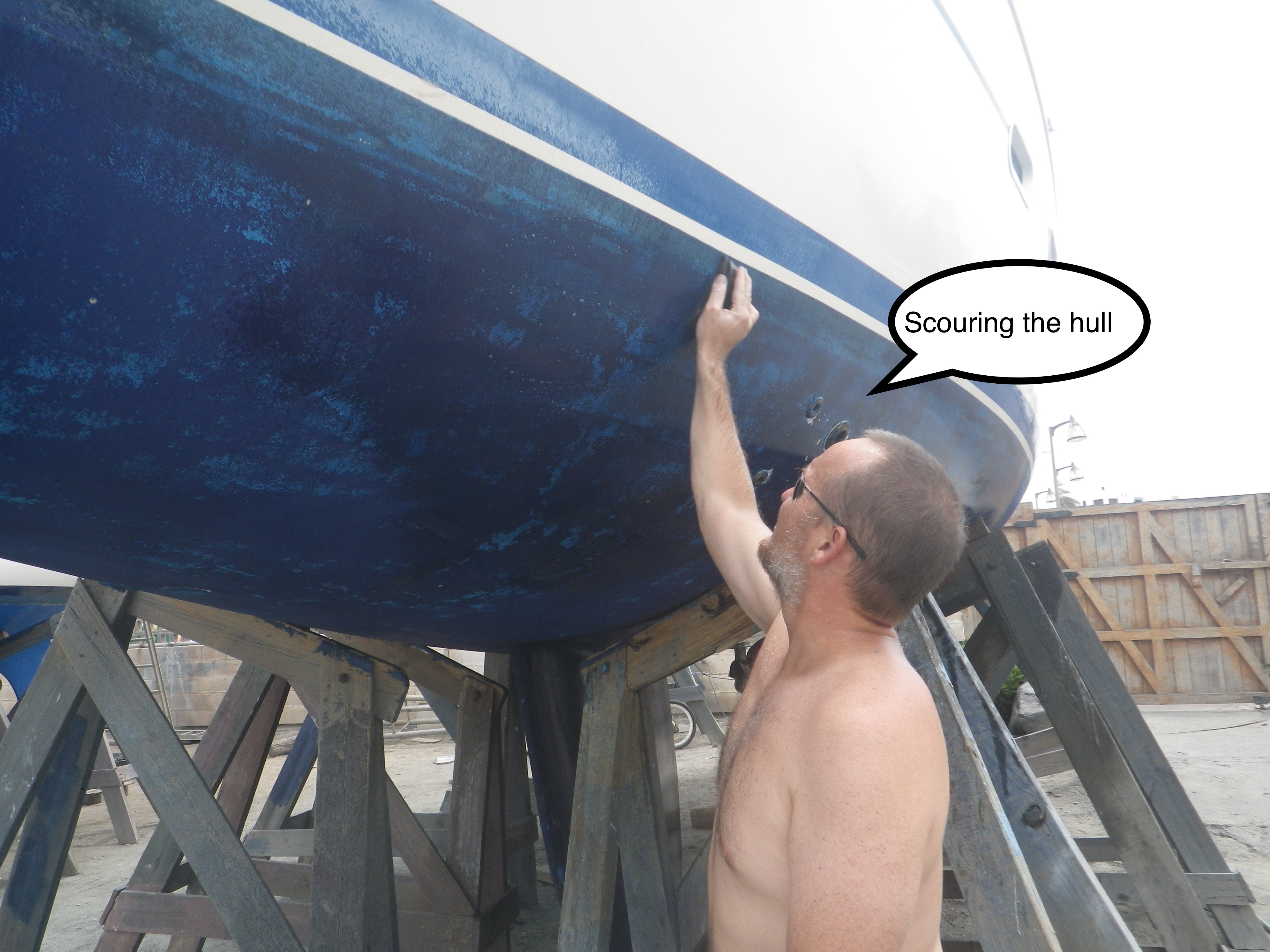 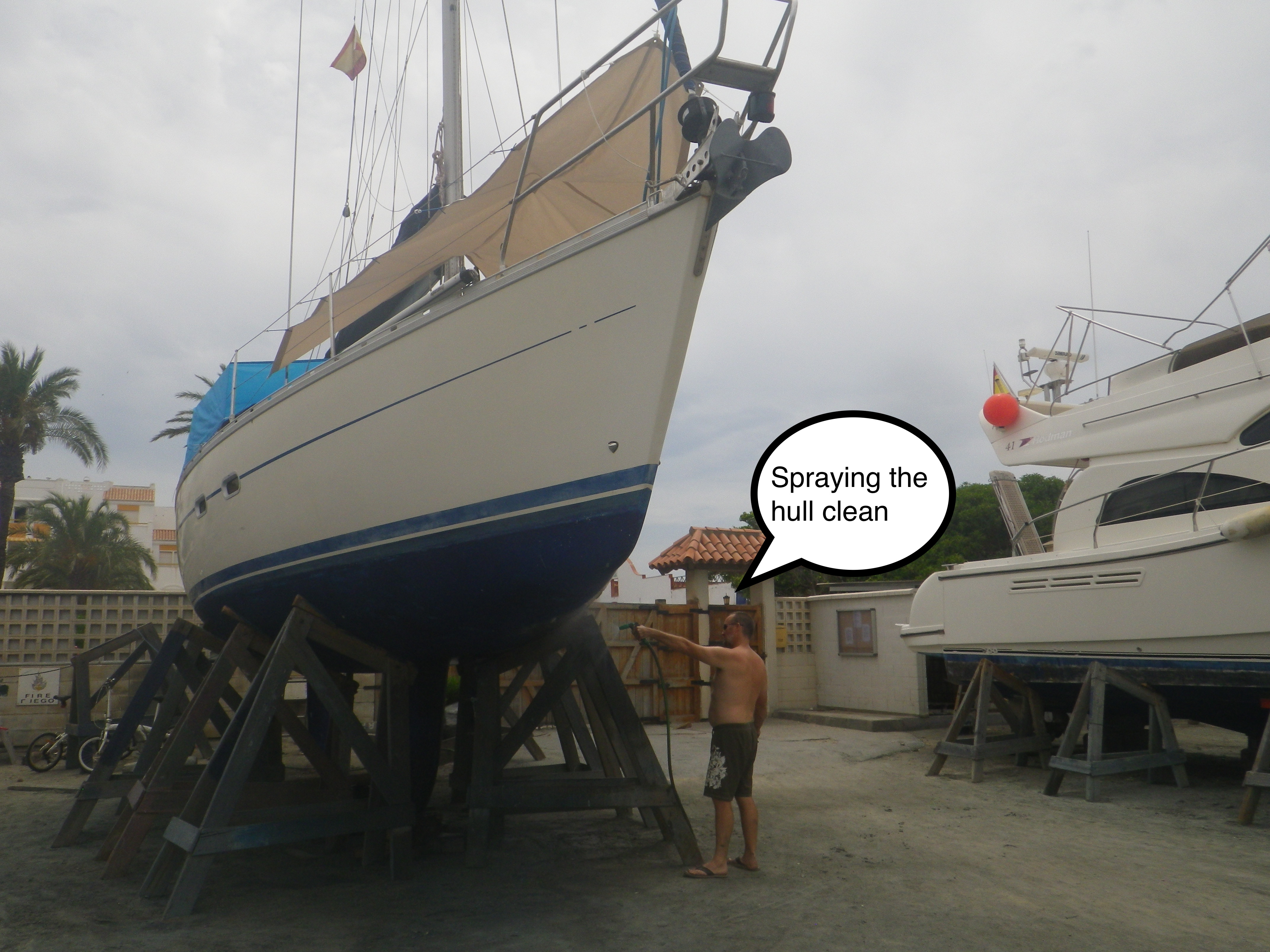 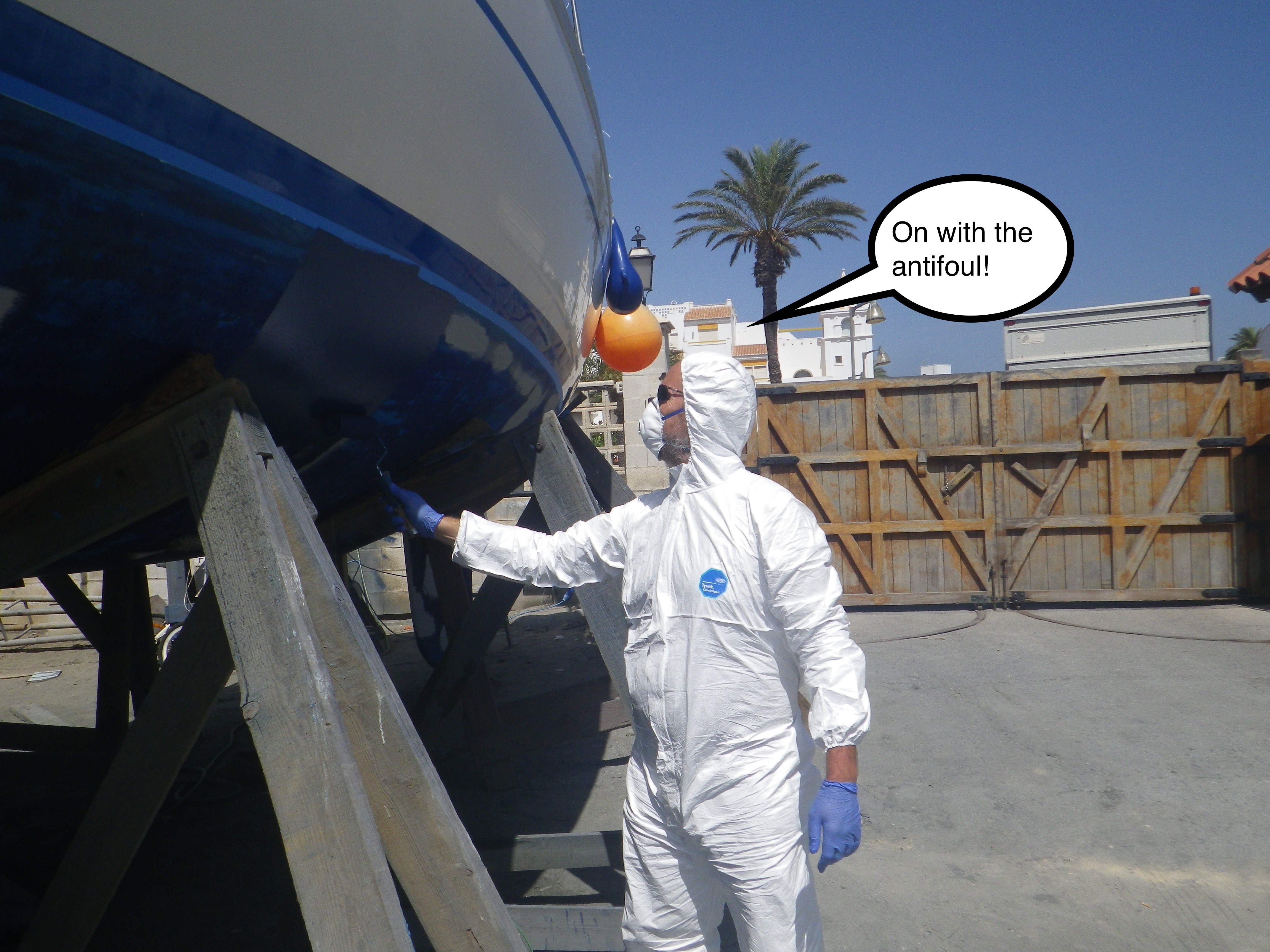 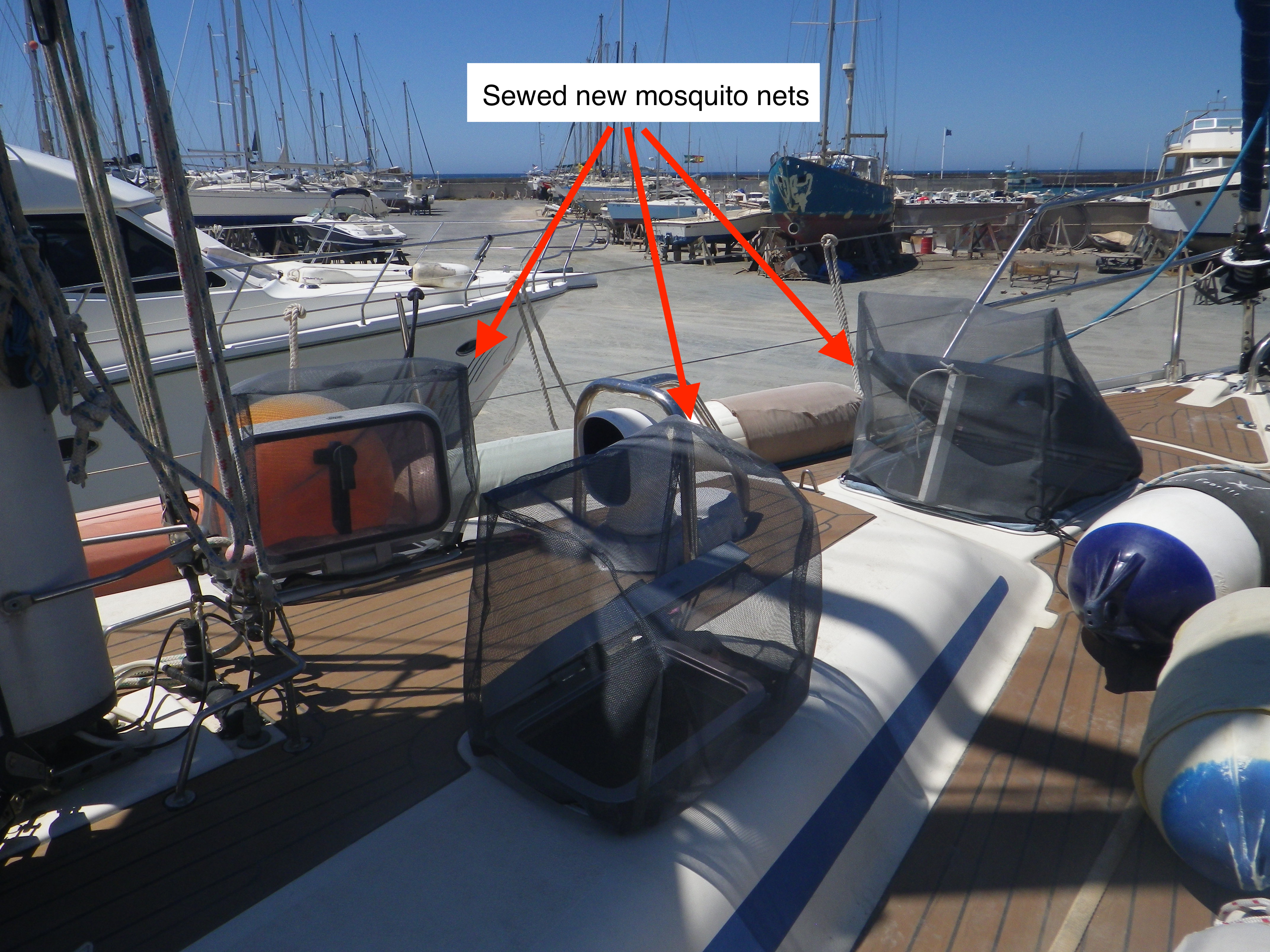 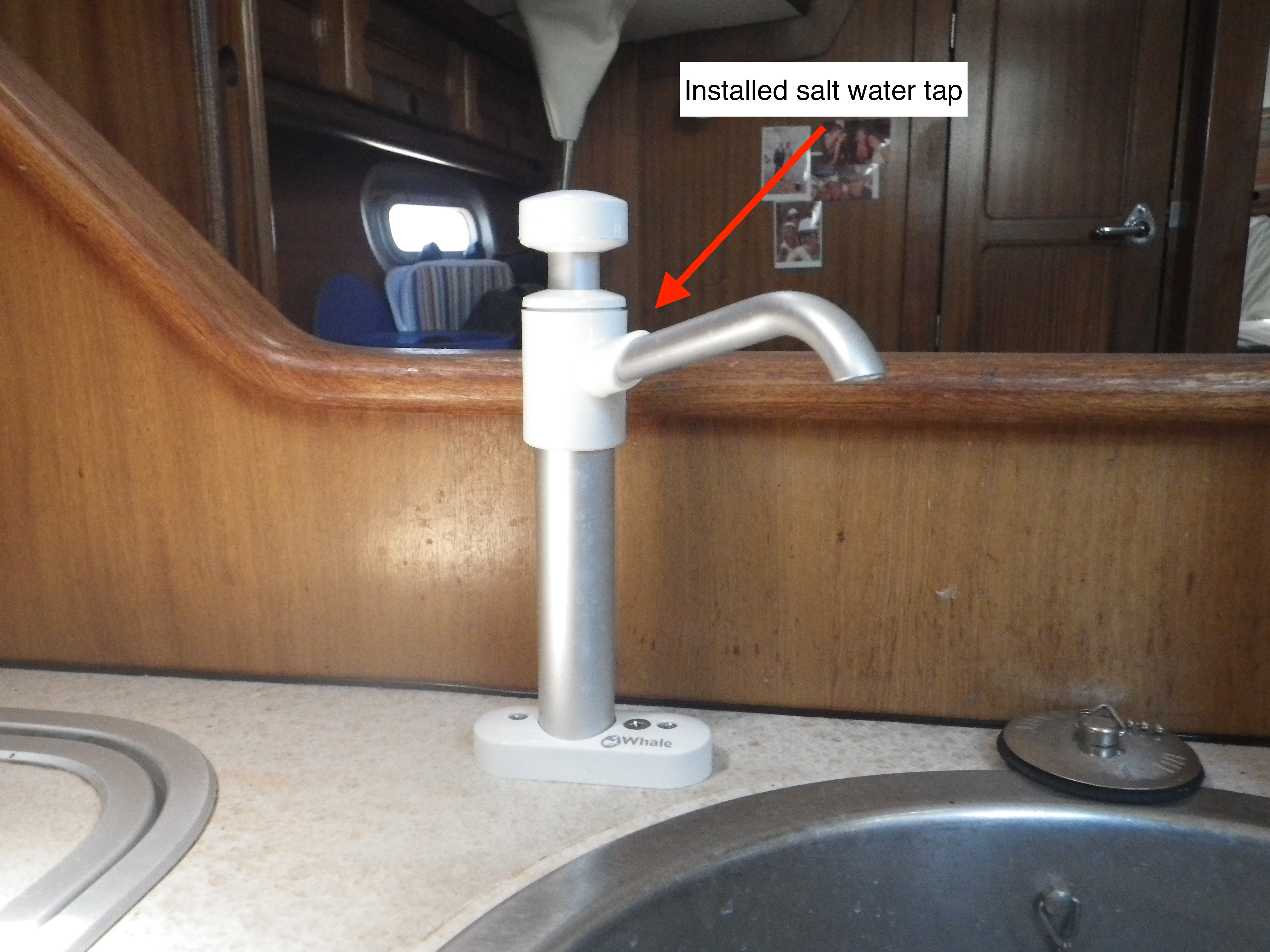 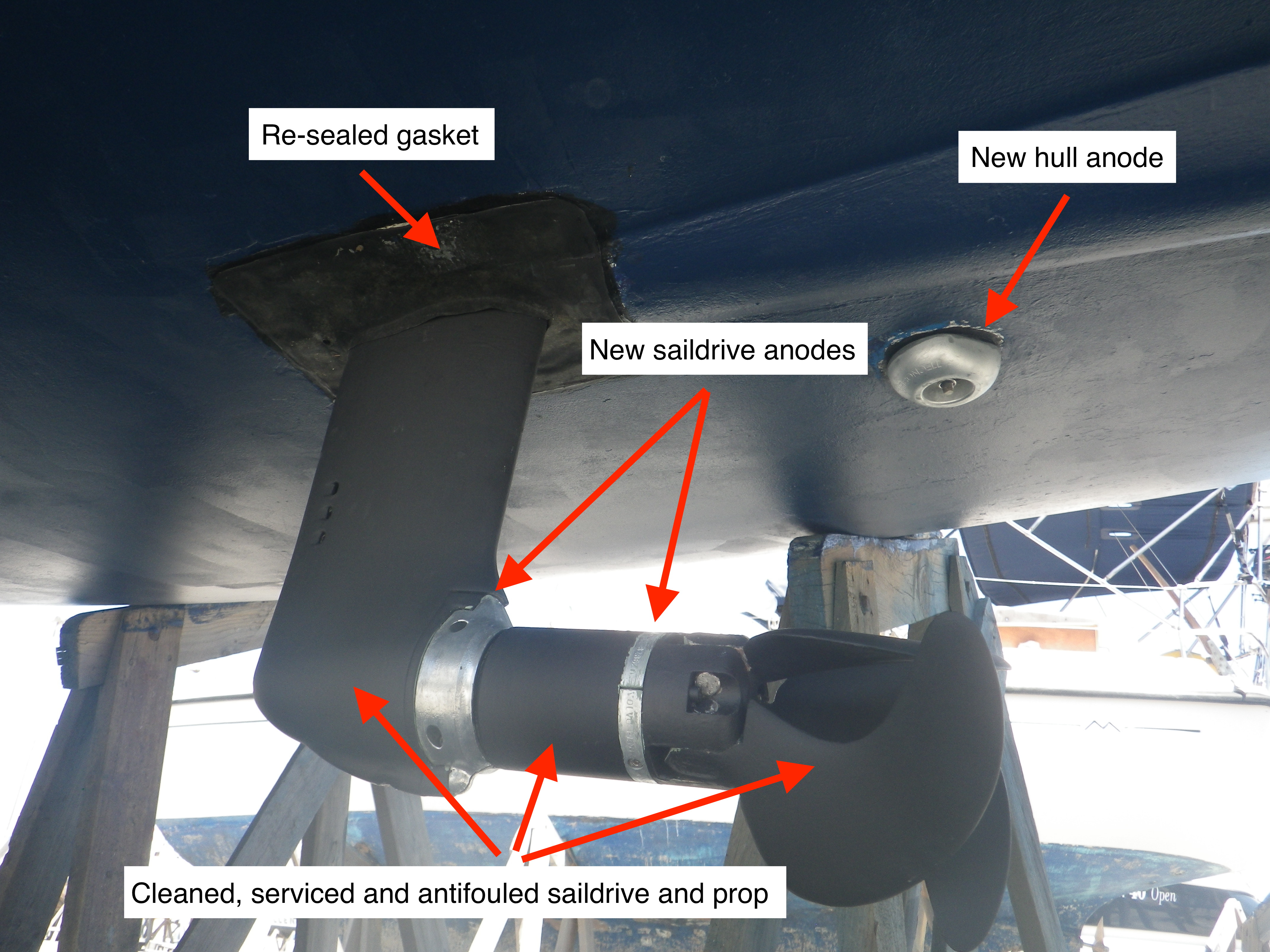 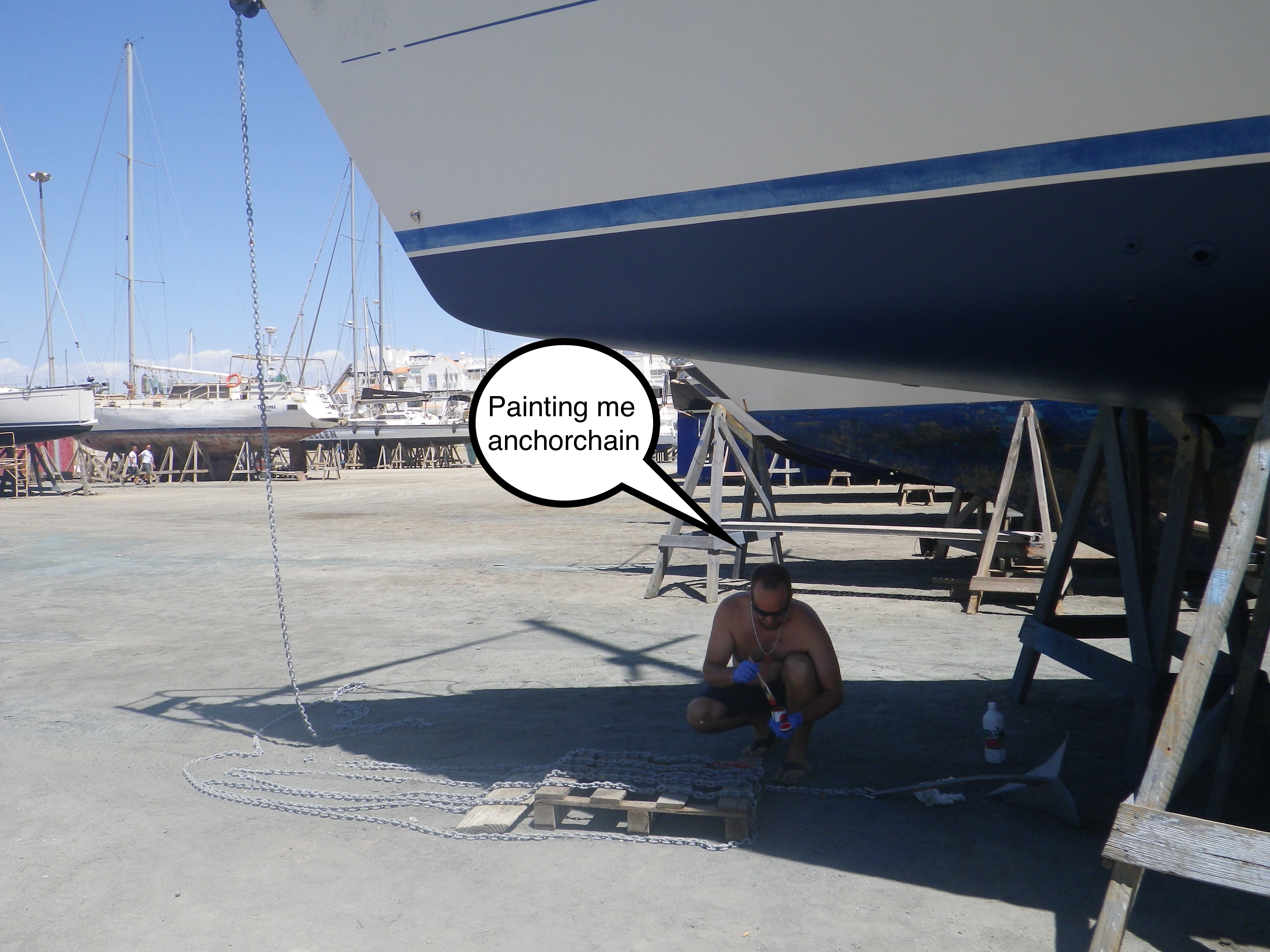 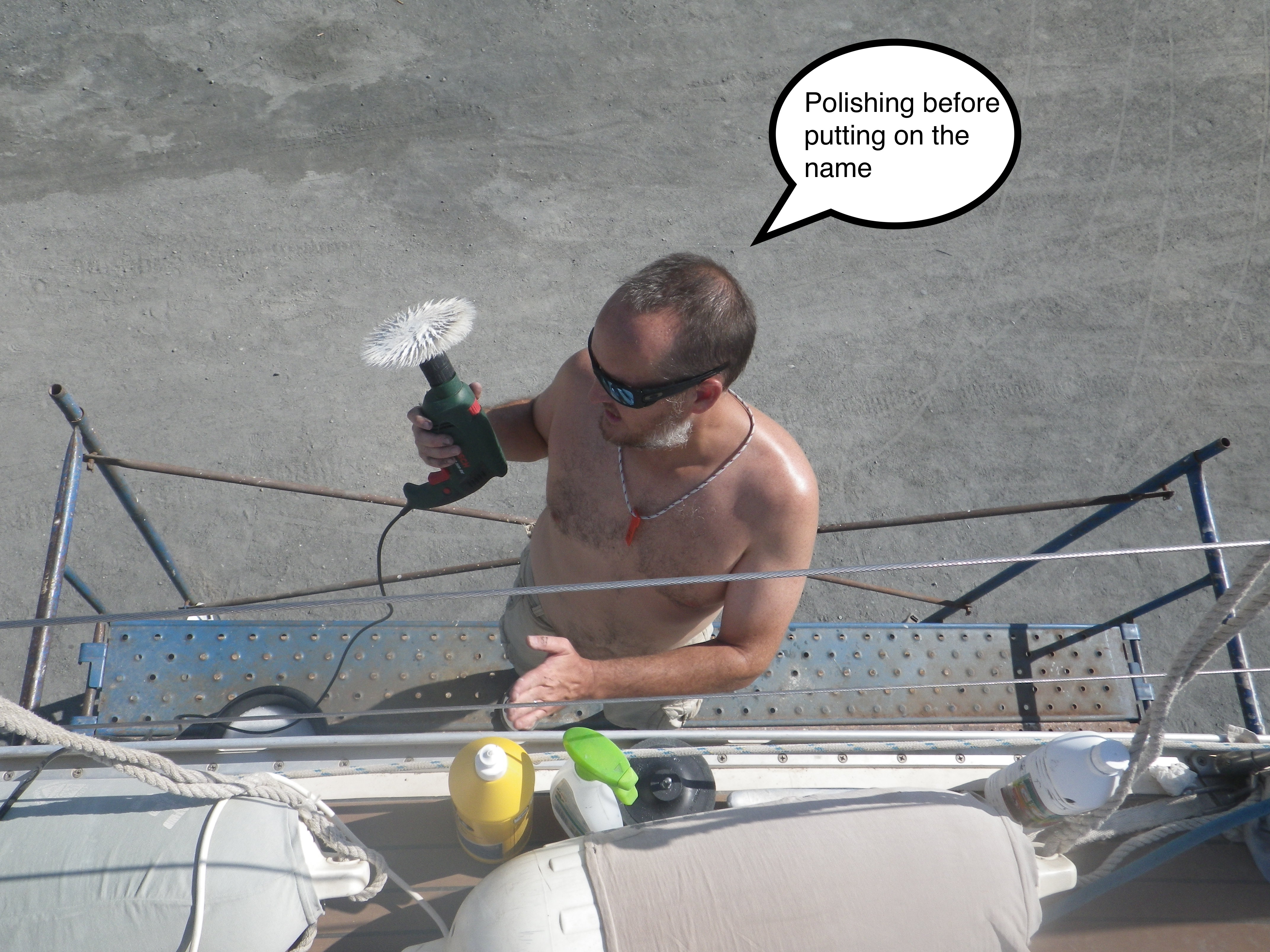 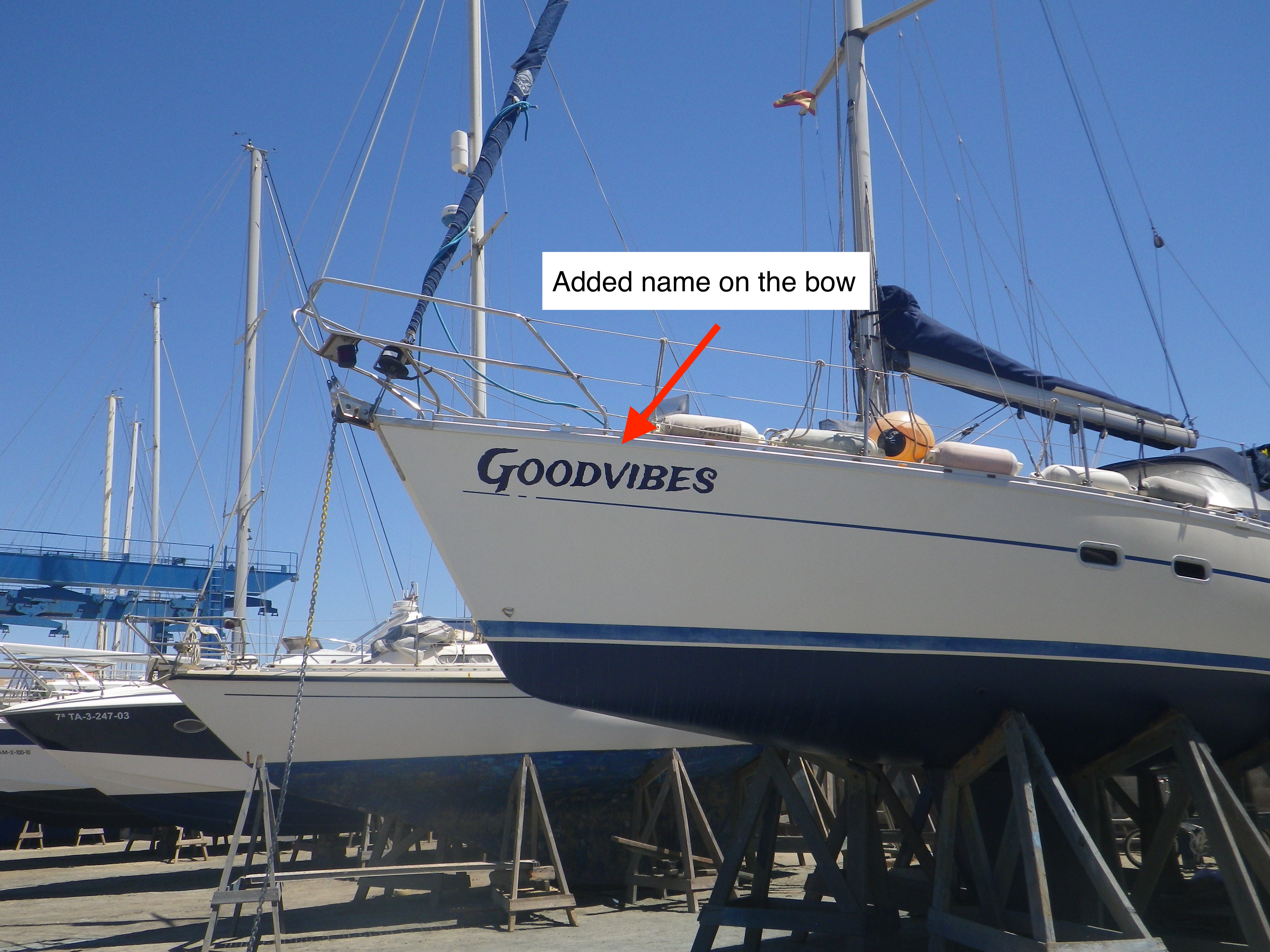 Back in the water 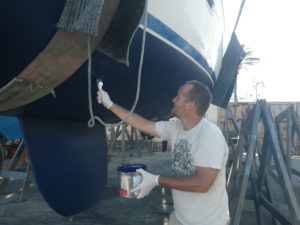 Touching up the last bits

It was time to get the boat wet again. If you paid close attention, you may wonder how we were able to put antifoul on the hull where it was being supported by the wooden stands. Basically, we weren’t. We had noticed when one of our neighbours was being hoisted up to be put back in the water, that he quickly painted those areas when the stands had been removed and the boat was in the slings. So we mentioned this to the boatyard staff and it was no problem to take 5 minutes to do this.

Other than that, the procedure was the reverse of when she was hauled out, and without any hiccups Goodvibes was back in her natural habitat. 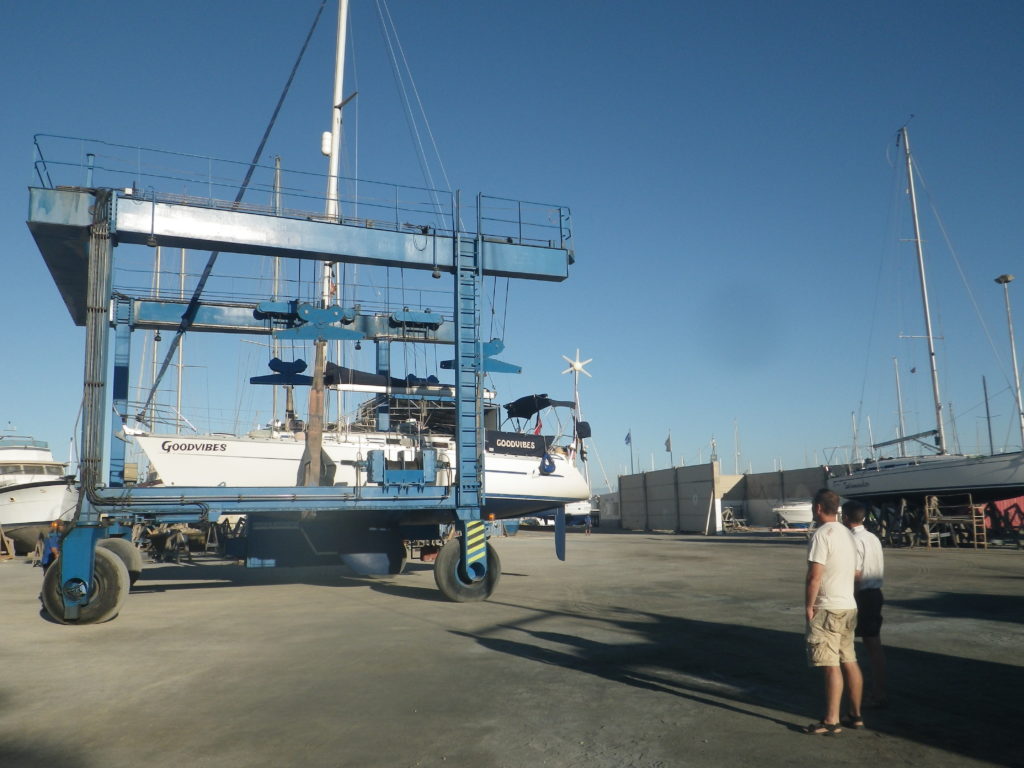 One Comment on “Life in the boatyard of Almerimar”