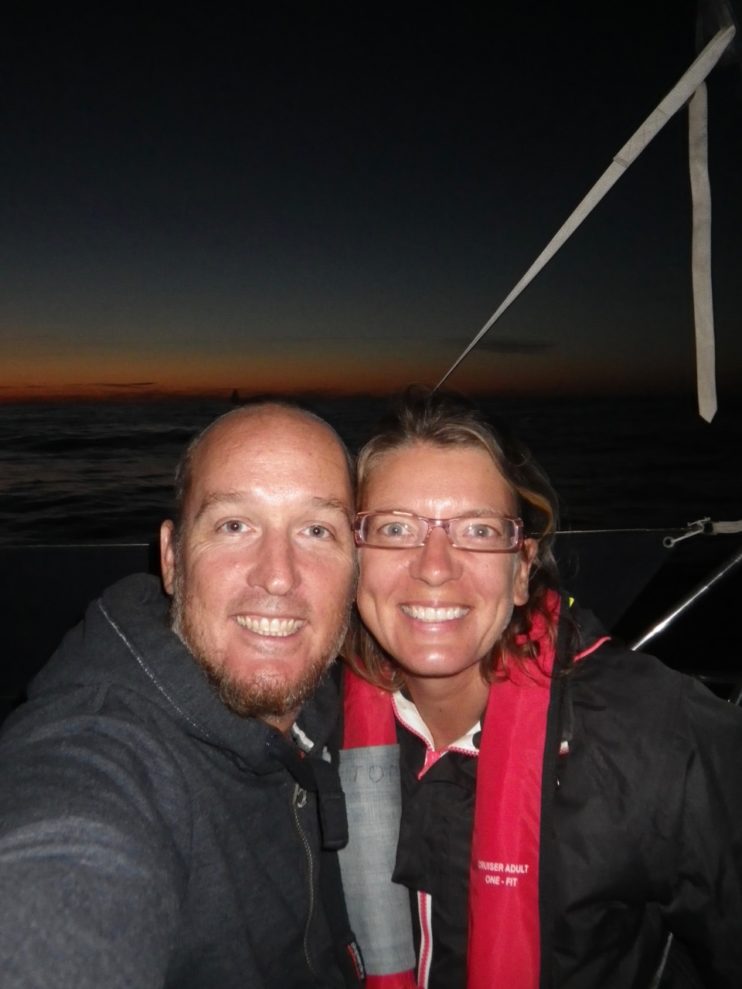 From the end of August onwards the weather in the Balearics gets more changeable: stronger winds and rain showers means you either have to spend more time in marina’s or constantly be aware of picking a suitable anchorage to be sheltered from the swell and wind. We already had decided to return to Gibraltar for the winter so we didn’t want to hang around much longer. All we needed was a good weather window to leave Mallorca and return to the Spanish mainland.
The forecast for Saturday the 2nd of September was around 10 knots of wind from the southeast, and a swell that was reducing from 1 meter to half a meter later in the day. The following days the weather would also be stable so this would be a good time to leave. 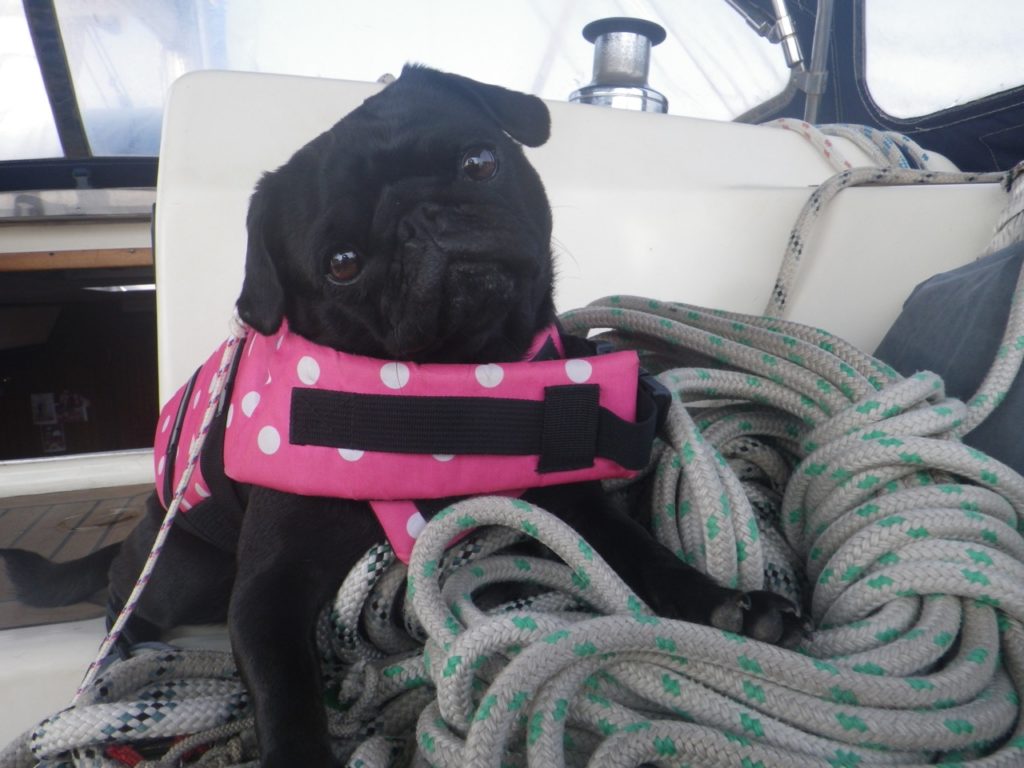 The famous pug head-tilt. Puppy is not so impressed when we tell her about the long journey ahead…

Our longest passage so far had included only 1 night and we were keen to push ourselves a bit further and make a longer passage. On the other hand, we had heard some stories about wind picking up a lot more than previously forecasted and we didn’t want to take an unnecessary risk by being too far away from land. Our initial heading would therefore be towards the south of Ibiza and Formentera, if all went well we would continue to cross towards Mar Menor. There we could fill up with fuel, or anchor if necessary. The journey would continue along the coast to Estepona where we wanted to spend some days before making the final leg to Gibraltar. 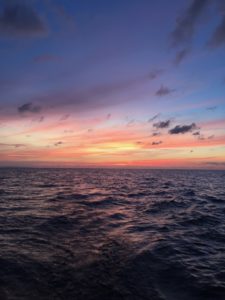 An amazing range of colours at sunrise

When we left Andratx the waves were still reasonably high, but luckily they were more or less in the same direction as us so it didn’t bother us too much. Just a few hours into our journey we saw a sea turtle at about 10 metres distance! It was pretty big, at least half meter long. Unfortunately we very quickly lost sight of it.
Once we rounded the southern tip of Formentera, the direction of the swell and winds changed to be more off our beam. During the night, the waves were still at least 0.5 meter high and Goodvibes was wobbling along – not great for our night rest. Over the course of the next day the wind picked up and at some point we reached over 7 knots of speed! The boat started to heel more and more, so we put our 2nd reef in (the 1st one was already put in the night before) which made it much more comfortable. We also decided to adjust our course more towards the north in order to reduce the impact of the waves. Even though that would add more miles to our trip, we were still making very good speed of more than 5.5 knots so we wouldn’t lose that much time. The wind gradually eased off during the second night of the trip, as we were passing Alicante and Torrevieja and at 4am we had to turn the engine on. 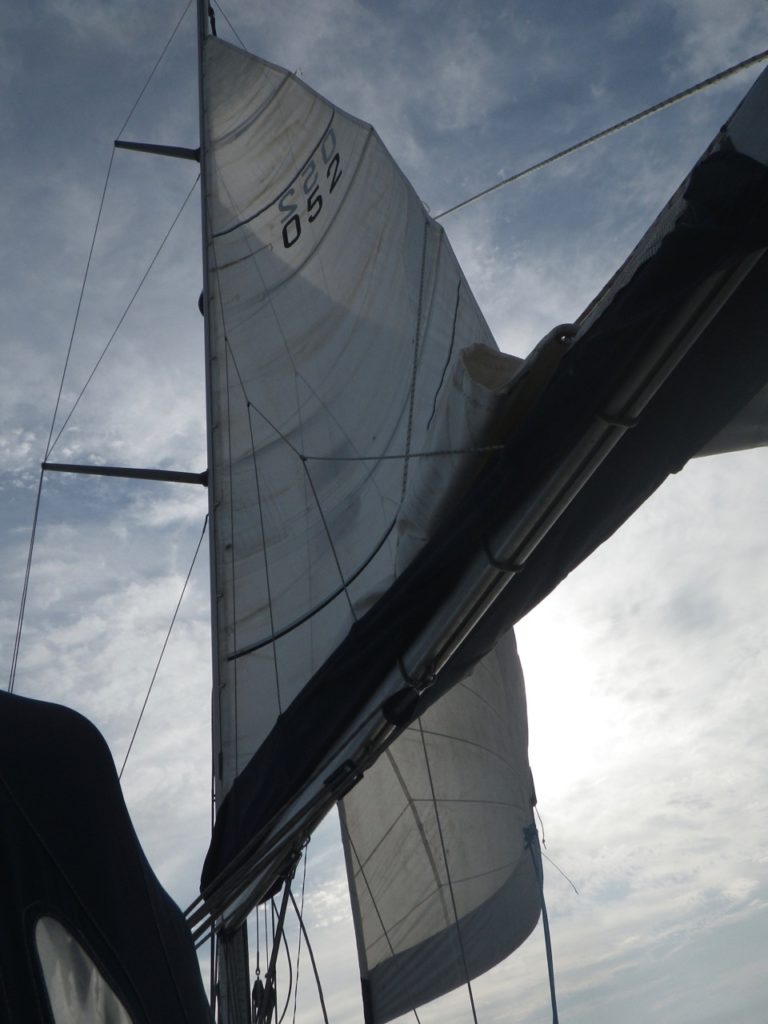 2 reefs in our mainsail, and reefed jib to reduce the power in the sails

Our arrival at Mar Menor could not have been better: at 11:50 we approached the canal to the bridge which we expected to open at 12. As we didn’t see many other boats line up, we called the bridge control on VHF to confirm the next available opening. The reply was: “In 3 days”… Huh? it turned out that the bridge was being repaired and not functioning. Luckily this didn’t throw a big spanner in the works because although we had planned to refuel in the marina past the bridge, we still had more than enough diesel to keep going. And besides that, we knew there was a very safe place to anchor just outside Mar Menor.
So we dropped the anchor and had a lovely night’s sleep.

The next morning, we weighed anchor around 9 and set sail to our next destination. There was little wind so we shook our 2 reefs out. 6 hours later, we decided to put them back in as we would round Cabo the Gata at the end of the night watch and this headland is notorious for being very windy and potentially treacherous to sail. The night turned out very quiet, with hardly any other traffic and no wind. The reefs were not really necessary but hey, better safe than sorry.

Since we hadn’t been able to get fuel in Mar Menor, we popped into Almerimar instead. Ferrari would have been proud at our rapid pitstop: in less than 20 minutes we had entered the marina, moored at the fuelling station, took the puppy for a quick walk, filled up, paid and left the marina. Big thanks to the Almerimar marina for this fantastic, efficient service.

We left the engine on as there was virtually no wind. The sea was also very flat and in combination with the full moon that night, it made for a very peaceful and enjoyable night watch. Even though we managed to get some good sleep we were very happy to arrive at Estepona around lunchtime on Thursday the 7th of September. We spent a few days here, catching up with friends and enjoying the familiar surroundings. 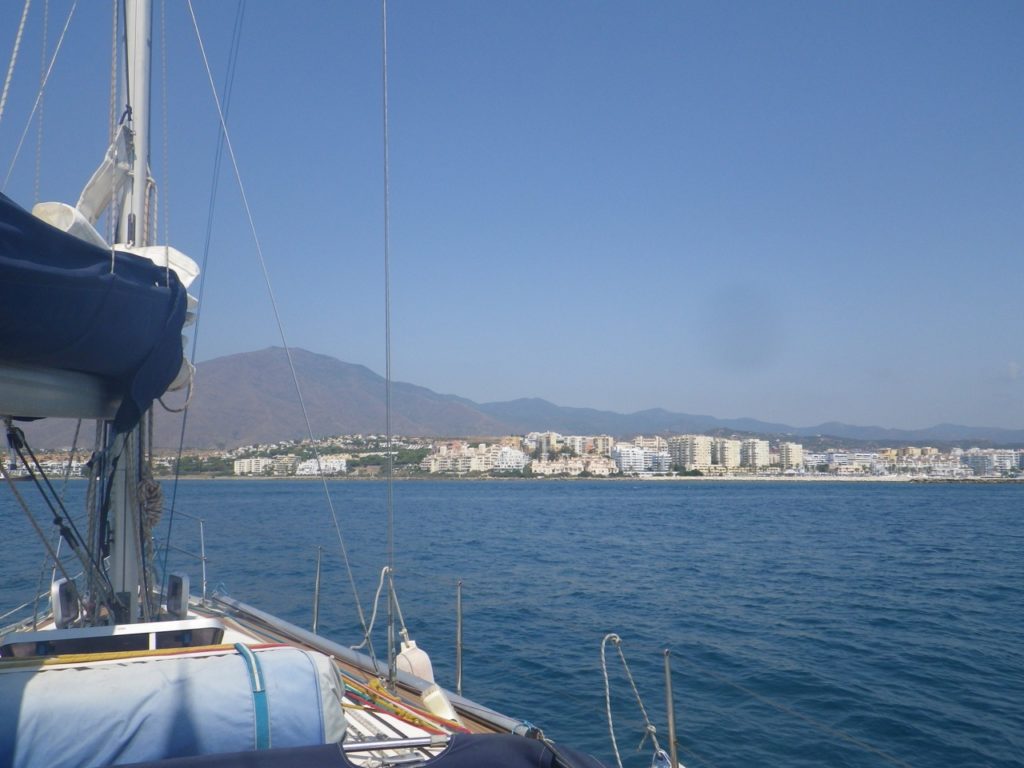 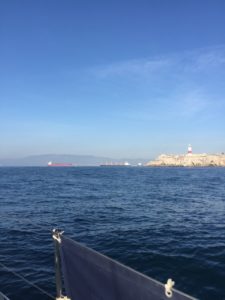 Europa point! Almost at the end of our 2017 sailing adventure

The wind was about to change to the west so we wanted to leave Estepona before this happened, especially because in the afternoons it could go up to 15-20 knots in the straits. This usually means you can add another 10 for going round Europa point (the southernmost tip of Gibraltar). We wanted to avoid a repeat of the day we left Gibraltar and therefore decided to leave Estepona early in the morning on Thursday the 14th of September. This meant we would have no wind to sail but at least we would arrive in Gib before the wind picked up.
We got up at 6.30, quickly walked the Puppy, disconnected the electricity and slipped the lines. At 7 am we were outside of Estepona marina. The trip was fairly uneventful. As expected there was no wind so we went on the engine all the way. The tide was with us and we were making good speed of around 6 knots. It was getting pretty chilly in the mornings now, and it was the first time we were wearing our jackets after sunrise. Around Europa point it got a little bit choppy but nothing serious.
At 11 am we arrived back in Marina Bay, Gibraltar! Our travels for this season are over and now it’s time to take care of the long lists of boat jobs and trying to earn some money so we are ready to take Goodvibes out again next spring.